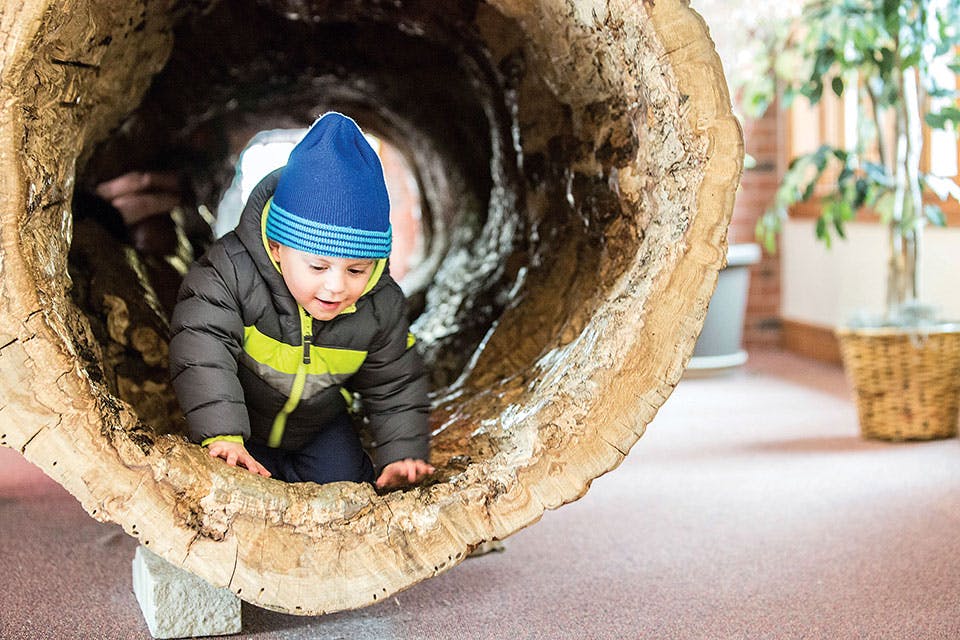 This attraction has roots dating back to 1945, when local resident Elberta Fleming spearheaded the effort to create a local hands-on nature center.

Although it’s a school day, the Lake Erie Nature & Science Center in Bay Village is bustling with activity. A group of 60 kindergarteners shriek with delight as they crawl through the 15-foot-long trunk of the 200-year-old hickory tree in the lobby. Later, a field trip of elementary school kids will be learning about fish that are native to Lake Erie and visiting a dozen reptiles in the Exhibit Gallery.

“We’re geared toward pointing out the wonders of nature to children, rewarding their curiosity and then encouraging that curiosity through their lives,” says Catherine Timko, Lake Erie Nature & Science Center’s executive director.

It’s a mission that began in 1945, when Bay Village resident Elberta Fleming was staffing the welcome desk at the Cleveland Museum of Natural History and a child approached to ask about the butterfly in his palm. Realizing that hands-on learning was something that needed to be cultivated, Fleming — an illustrator who made drawings for the museum’s researchers — began conducting nature classes at the Bay Village Library.

The popularity of those programs led her to launch a campaign that raised funds for the Lake Erie Nature & Science Center, which opened in 1960. In addition to presenting programs, staff members answer questions from more than 5,000 callers a year who are concerned about an animal they’ve encountered that appears to be injured. Timko estimates the center administers to more than 1,400 animals annually to determine if they can be released. Those that cannot often become residents of the Wildlife Garden. Animals there include a great-horned owl missing an eye and a red fox that was raised by humans and cannot survive on its own.

“Our job here is to make sure that every child looks, discovers and feels excited about what’s in the world, and then shares that joy with the people around them,” Timko says. “The lessons we teach here are timeless.”