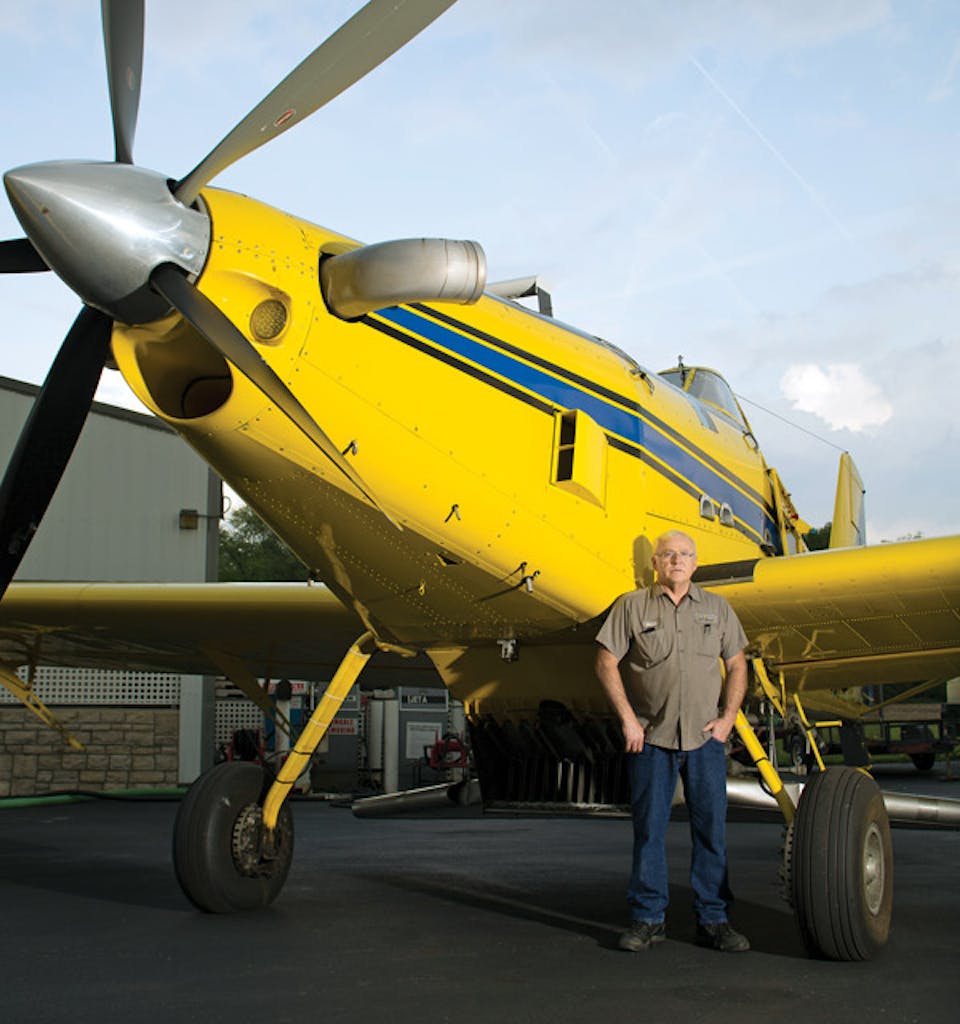 Butch Fisher’s line of work may seem like a retro notion, but crop dusting is a thoroughly modern necessity.

Butch Fisher banks the small Cessna into a tight right turn and aims for the ground.

“This’ll give you a little feel for what it’s like when we make a pass,” the 62-year-old crop duster says through his pilot’s headset.

In a blink, the aircraft dives from the sunny blue sky and levels out, skimming the grass landing strip on Fisher’s home farm at 150 mph.

By comparison, Cedar Point’s fastest ride, Top Thrill Dragster, reaches speeds of 120 mph. And most roller coasters don’t have a line of large trees flying straight at you in the middle of the ride. Just before the grass strip ends at the woods on the edge of the farm, the pilot gracefully pulls up, sails easily over the trees and heads into the sky once more.

Then, Fisher makes a stomach-grabbing 180-degree pivot — called an “ag turn,” he says — ready to make a return pass over the farm as if he undertakes such maneuvers every day. That’s because for long stretches of the year, he does. 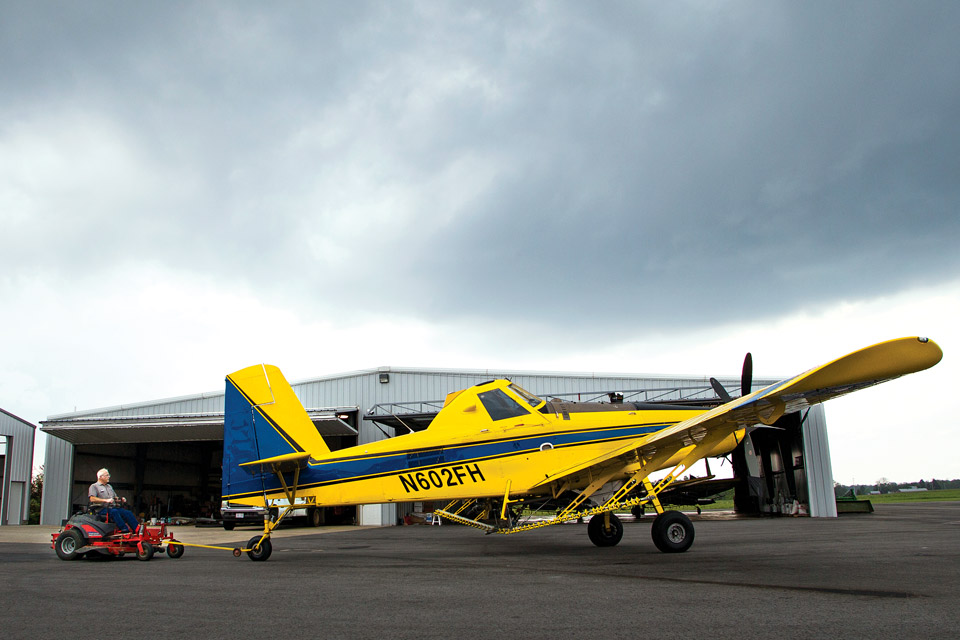 Most of Fisher’s work lies west of Interstate 71, where the majority of Ohio’s larger farms are located. Although there’s a retro feel to what he does, it’s a methodical and modern service that helps farmers looking to generate higher and higher production per acre.

“As long as we’re needed to produce crops for the U.S. and the world,” Fisher says, “there’s going to be a pretty good demand.”

Fisher is easygoing with silvery hair and blue-gray eyes. Wearing a brown leather jacket, he still exudes the boyish enthusiasm that led him to aviation in the first place.

A childhood helicopter ride at the Ohio State Fair made him fall in love with flying. A neighbor who was a former military-instructor pilot gave him lessons, and Fisher soloed at age 16. He received his pilot’s license at 19 and his commercial applicator’s license at 21 before founding Fisher’s Ag Service in 1975.

“What started out as a hobby, learning to fly, kind of turned into a career — and I still have fun,” he says. “I started for the love of it, and I’m still out here wanting to do it at 62.”

The aerial-application industry that Fisher has worked in for nearly four decades was born in Dayton in 1921, when a caterpillar infestation threatened a local farm’s catalpa trees. The U.S. Department of Agriculture and the U.S. Army cut a hole in the floor of an airplane to spread an insecticide dust over the trees. “Dusting” is all but obsolete these days, but the name stuck.

Fisher doesn’t mind the term “crop duster,” though the barnstorming image it evokes doesn’t reflect the level of training, technology and farming expertise the job demands. Safety for people and homes is the pilot’s top priority, Fisher says.

Wings are engineered so airflow keeps the spray in a tight pattern. A drift-detection system tells the pilot if there’s any danger of wind carrying spray beyond the field. All that, coupled with low-altitude flying, allows material to be applied with precision.

Fisher’s planes employ satellite systems that track the aircraft’s every movement — from spraying activity to how far off the ground it’s flying — down to the inch. That data is overlaid on a Google Earth map and provided to the customer, allowing the farmer to evaluate the effectiveness of each application.

“We also have in that guidance system a moving map, which actually shows us on our screen where we’ve sprayed and where we haven’t,” Fisher says.  “So if there’s a question about where we’ve flown over areas or groups of houses, we’ve got kind of a living print of where we’ve been spraying.”

The operation’s workhorse is the aptly named Air Tractor 802. It’s the Texas-based manufacturer’s largest ag plane and it can carry up to 800 gallons of liquid or 7,000 pounds of dry material in a hopper located between pilot and propeller.

The hopper gives the aircraft the look of having a long nose. Fans of Disney’s 2013 animated film “Planes” will recognize the design from that movie’s star character, Dusty Crophopper, which was inspired by an Air Tractor.

Fisher logged almost 500 hours in the Air Tractor 802 last season alone. With its 1,350-horsepower turboprop engine and 60-foot wingspan, the aircraft is an imposing figure in Fisher’s hangar. Or as he puts it, “It’s a big animal.” 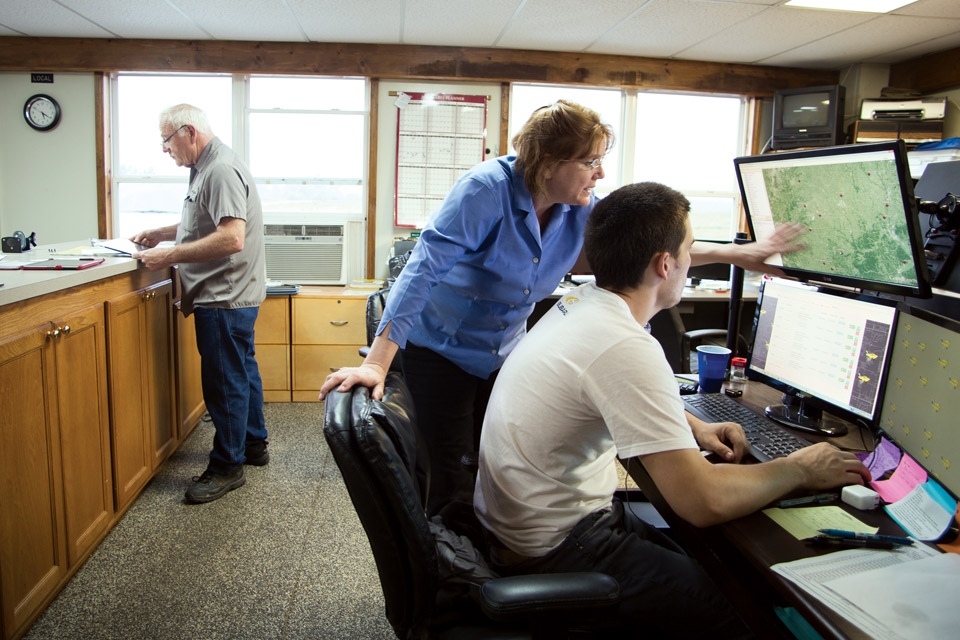 Fisher runs the operation with his son, Brian, and wife, Linda, who manages the digital-mapping systems.

The 802 is one of four Air Tractors in Fisher’s lineup, including one flown by his son, Brian. Fisher also has an Extra 300 aerobatic plane that’s capable of flying 200 mph and pulling 10 Gs of force. “It’ll do anything you want — flip end over end, anything,” he says. “And they’re really nice to fly.”

The Extra 300 was a gift from his wife, Linda, a nurse anesthetist who manages the business’s modern digital-mapping systems. Fisher’s Ag Service is currently one of eight aerial-application operations in the state. That figure was around 35 before the advent of ground-based applicators in the 1970s and ’80s. At one point, the number of crop-dusting companies in Ohio had fallen to as few as four.

The benefit of aerial application, Fisher explains, is he can work fields even when the plants are mature without damaging them. Today there are more plant-health products such as fungicides and fertilizers than ever, allowing farmers to tailor applications to their crops’ needs at any point in the growing season. The healthier a farmer keeps the plants, the bigger the yield.

“We’re actually able to do it, save them money, and get the product on faster,” he says.

In the early years, when business was slow, Fisher supplemented his income with mechanical work, plane rentals and flying lessons. A veteran airline pilot may log about 20,000 hours of flight time in a career. Fisher is approaching 30,000 hours — the equivalent of almost three and a half years in the air.

“It’s partly the love of the flying that makes you a much better pilot and then a more accurate, more precise pilot,” he says. “I utilize that in the crop spraying and the acrobatic flying. That makes the difference between a pilot and a good pilot. When it’s something you really enjoy doing, you’re going to be more proficient at it and do a better job.”

Fisher says the plan is for Brian to take on more of the business’s daily responsibilities. But don’t expect him to hand over the keys to the Air Tractor any time soon.

“I’ll probably be slowing down one of these days — but not quite yet,” Fisher says with a twinkle. “The boys still have to run to keep up with Pop.”