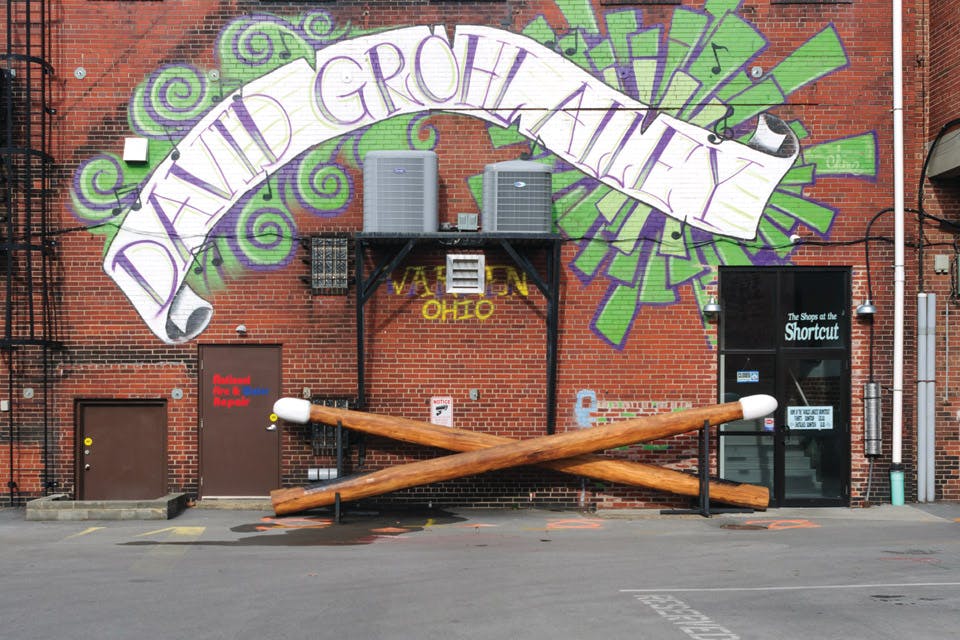 Behind the sandwich shop and the comic book store on Warren’s Market Street runs a vein of rock ’n’ roll. Dave Grohl Alley cuts behind businesses and apartment buildings, its brick walls painted with murals that pay tribute to the Warren-born Nirvana drummer and Foo Fighters frontman.

Colorful portraits of the Rock and Roll Hall of Fame inductee peer out from one wall, while a sculpture installed in the alley depicts a metal figure that resembles Grohl playing a drum kit. There’s even a pair of drumsticks on display — the world’s largest at 900 pounds each.

But up until 2009, the alley wasn’t anything special. Actually, it was dingy, overgrown and cluttered with litter. That was until now-retired local police officer Joseph O’Grady learned Grohl had been born in Warren and decided the city needed a musical tribute to their hometown hero.

“This guy was the drummer in Nirvana. Why is it nobody’s saying anything?” O’Grady, a lifelong music fan, recalls thinking. “I couldn’t believe it.”

And while he could have simply picked a day to dedicate to Grohl, what O’Grady really wanted was to create a destination.

Familiar with the city’s streets, he located one downtown without any addresses, which makes for a relatively uncomplicated name change, and petitioned city council to rename the alley. But a new name alone wasn’t enough.

“I thought, Let’s have a grand opening celebration, a big music event,” recalls O’Grady, adding that the celebration grew into a full-on festival with local bands, food, drinks and one unexpected guest. “All of a sudden, this car pulls in. Guess who gets out?”

Grohl made a few remarks in appreciation of the honor and even jumped in with Youngstown band Love Turns Hate to play a few songs. “He was the kindest, most appreciative person in the world,” O’Grady says.

Since its creation, the alley has also become a rotating canvas for local artists and is always open to a new interpretation or appreciation for Grohl’s music. “It’s for the artist, but it makes it a little travel destination,” O’Grady says. “That’s what I wanted: to bring people to Warren.”