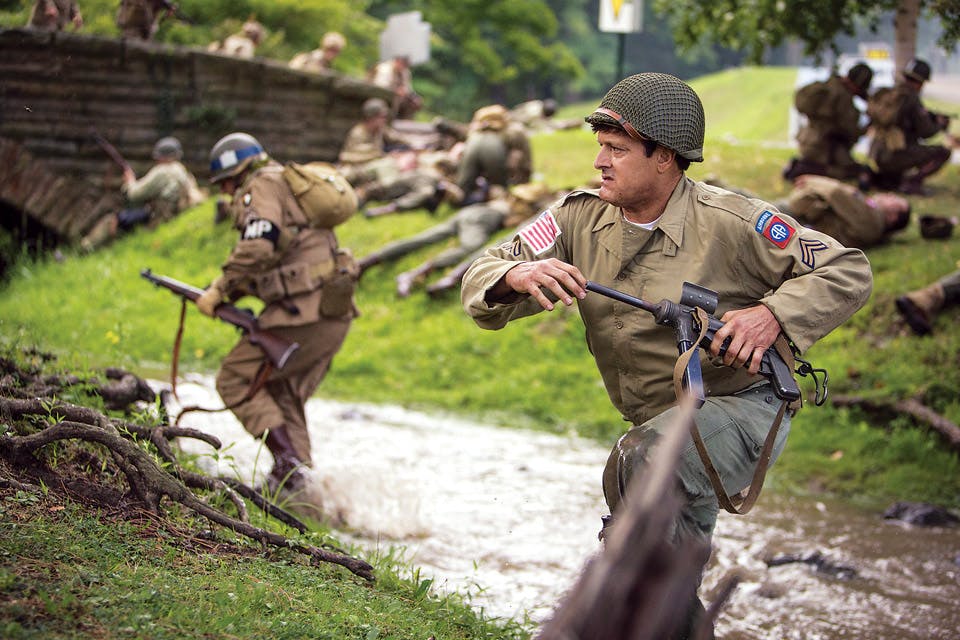 The annual event draws World War II re-enactors, veterans and thousands of spectators to the Lake Erie shore each summer.

During the summer of 1999, a group of living-history buffs re-enacted the D-Day landing on the shores of Lake Erie in Conneaut. They chose the location because it was a fairly close approximation to the beach and bluffs at Normandy, France, and for the first decade or so, it was a small affair — maybe 200 re-enactors and about 100 curious onlookers.

But since then, the event at Conneaut Township Park has exploded in popularity. In 2018, 1,400 re-enactors and 130 World War II veterans attended D-Day Conneaut, while more than 45,000 spectators showed up to watch. Similar crowds are expected for this year’s re-enactment, which runs Aug. 15 through 17.

“It’s changed dramatically,” says Betsy Bashore, CEO of D-Day Ohio, the nonprofit that stages the event. “One of our challenges is we’ve done so much over the years, so it’s hard to find new things.”

The centerpiece of the event is the re-enactment of the D-Day landing on Saturday, but there will be smaller engagements between Allied and Axis forces, encampments offering living-history lessons and period aircraft and vehicles. Among the participants will be WW2 Armor, a Florida-based group that is bringing several pieces of equipment to the re-enactment.

“We end up learning more than we share,” says John Thomas, WW2 Armor’s director of facilities and event coordinator. “There’s such a variety of people there.”

Attendees include World War II veterans, who are honored at a special ceremony Saturday morning. Of the more than 16 million Americans who fought in World War II, fewer than 500,000 are still alive today. Bashore says last year marked the first time there was a year-over-year decline in the number of WWII veterans at the event.

The fact that people plan their vacations around the event is an awesome responsibility, but Thomas notes it’s also a tribute to the experience.

“In our belief, it’s the finest World War II re-enactment event in the United States, if not the world,” he says. “It’s the Super Bowl of World War II events.”