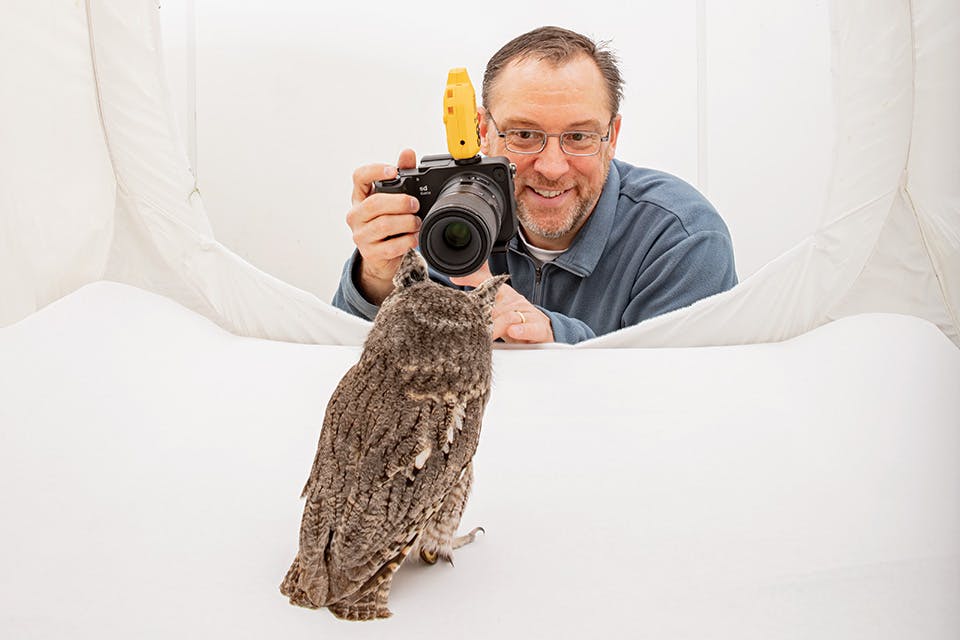 Children’s book author and photographer David FitzSimmons has turned his love for nature into a successful business that teaches kids about the beautiful and strange animals in their backyard.

The small gray treefrog looks gargantuan staring out from one of photographer David FitzSimmons’ 24-by-36-inch prints. The amphibian weighs just a quarter of an ounce when full grown, but this larger-than-life version presents the frog as a regal representative of the animal kingdom, his front legs tucked up under his chest, his black and gold eyes staring straight forward and his skin sporting a beautiful, light-green hue.

The image is one of two dozen large-scale photographs FitzSimmons brought to Telluride, Colorado, in 2010 for a gallery show of his work at the historic Sheridan Opera House. His series of wild animals on seamless, white backgrounds also included a jumping spider, an Eastern box turtle, a striped skunk and a blue jay. The photographer was curious how those in attendance would respond to his work.

“People walked in and they just oohed and aahed and reacted in a way I had never seen audiences react to gallery events before,” he recalls. “They were cringing from the spider picture and laughing at the other animals.”

The photographer took it all in, watching each person’s reaction before introducing himself. That’s when he was asked the question that would change the direction of his career: “Person after person said to me, ‘You have a book of these, right?’ ”

He didn’t, but on the flight home from Colorado, FitzSimmons decided to create one. He knew his approach to animal photography was powerful, but there were still lots of other questions: What would a book of his work look like? How would he produce it? What kinds of animals would he feature in it? 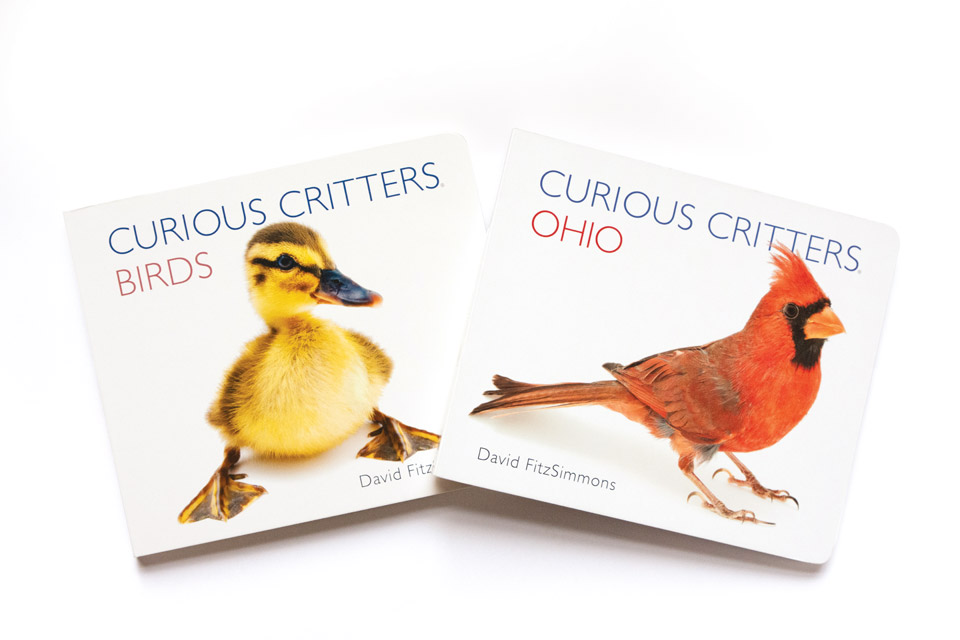 David FitzSimmons has published 17 small board books for children. (photo by Rachael Jirousek)

So, the longtime nature lover and lifelong Ohioan narrowed his focus down to animals one would find in North America. Then, he decided to limit his subject matter mostly to common species kids are likely to encounter in their own backyards, creating the groundwork for a career as a book author that has not only allowed FitzSimmons to share his love for nature but also instill an appreciation for the world around us in others, particularly kids. His Curious Critters series of children’s books now spans 20 titles.

FitzSimmons’ belief is the age-appropriate way to develop environmentalism and conservation habits among children is not to focus on pollution and other problems facing the world.

“Instead, the way to develop conservation mindedness — a focus on taking care of the world — is to bring kids in contact with nature,” FitzSimmons explains. “My books are not presenting problems to kids. They’re presenting them with animals they can fall in love with.”

David FitzSimmons sits behind a pair of computer monitors in the basement of his home near Bellville as he clicks through images he’s created during the past decade, including one of his newer ones: an enormous, gray Neapolitan Mastiff that’s part of a new book project that will focus on dogs. It’s a bit of a departure for the photographer and storyteller, who has been, to this point, focused on photographing wild animals rather than domesticated ones. 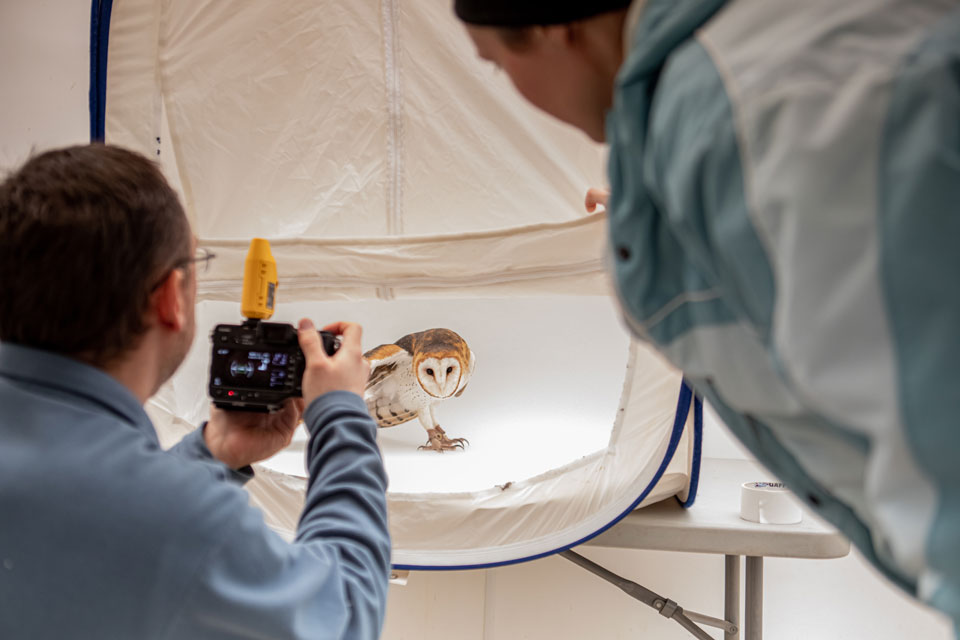 David FitzSimmons photographs a barn owl in at the Ohio Bird Sanctuary in Mansfield. (photo by Laura Watilo Blake)

On the shelf behind him sits a collection of camera lenses from his branding sponsor, Sigma. The company makes third-party products for Canon, Nikon and Sony cameras as well as its own equipment, and FitzSimmons is one of six Sigma Pro Photographers in the U.S. He speaks at conferences and workshops on behalf of the company, which affords him the ability to travel and the time to seek out wildlife native to an area by working with nature centers, zoos, aquariums and rehabilitation facilities to photograph animals.

What’s interesting about FitzSimmons is that his background isn’t in biology, but English. He earned his Ph.D. in the field with specialties in narrative theory and Faulkner studies and was a tenured faculty member at Ashland University, while having a photography business on the side. It was during his time in academia that his love for research, storytelling and nature merged in a book, Animals of Ohio’s Ponds and Vernal Pools. FitzSimmons wrote it and photographer Gary Meszaros provided the images.

“I had to do a lot of research [for the book],” FitzSimmons says. “Part of what I considered research was getting out in the field. I bought hip waders and nets and went out. While I was doing that, I brought animals back and photographed them in my studio, and I was photographing on location. I was building up a collection.”

He had also been using a light tent during some of his outdoor photography sessions. He would zip out its floor, so he could capture wildflowers in the absence of wind and bathed in a soft light, which resulted in an article in Popular Photography magazine in 2009. Then, Sigma’s Dave Metz suggested FitzSimmons photograph a few small critters in his light tent. (The images later ended up as two advertisements in Outdoor Photographer magazine.) 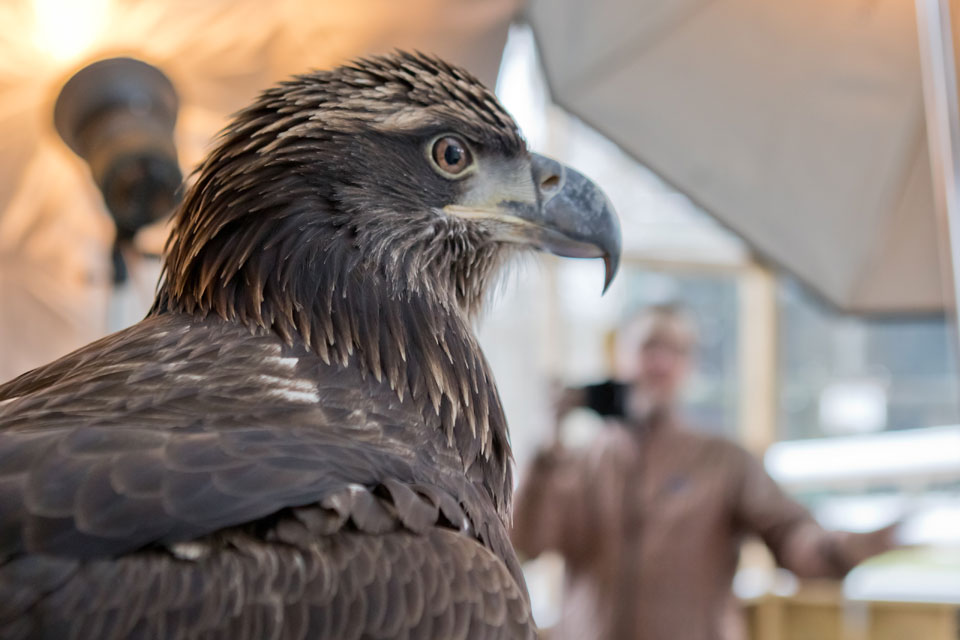 So, FitzSimmons called the director of Mansfield’s Gorman Center, Steve McKee, and asked if he could bring his setup over to photograph a variety of animals that lived there. It was around this time that FitzSimmons’ oldest daughter also helped create what would become one of the series’ most popular images, when she discovered a gray treefrog sitting on her scooter.

“The gray treefrog changes color from green to gray,” FitzSimmons explains. “And when I brought it in from the scooter, it was matching the silver color of the metal. I put it in the light tent, and it turned green like that. This quickly became the iconic image in the series.”

Looking at FitzSimmons’ background, it’s easy to see how he ended up here. His father, Mick, created and ran the Mansfield City Schools’ outdoor education program, and after retirement worked as a naturalist at Malabar Farm State Park, where FitzSimmons met his wife, Olivia, who is also a naturalist.

His mom, Judy, was an educator with a background in English, first teaching high school and then elementary school, eventually becoming a specialist in children’s literature, taking FitzSimmons to conferences where he met authors such as Jean Craighead George (Julie of the Wolves, My Side of the Mountain) and Chris Van Allsburg (Jumanji, The Polar Express).

“If you draw the lines from my parents to me, it’s not hard to see where the apple fell,” FitzSimmons says. “My dad was an outdoor educator whose greatest strength was being able to show enthusiasm to kids. Someone might spot a cardinal. Even though it was the 10,000th time he had seen a cardinal, my dad would act like it was the first time.”

It wasn’t long after FitzSimmons started photographing animals in his signature style — full body on a white backdrop with only a soft shadow to re-create the animals’ three-dimensional appearance — that Sigma’s Dave Metz saw the potential in it.

“Sigma fell in behind the project and started providing support for the work I was doing,” FitzSimmons says. “By that, I mean providing lenses and then giving me opportunities.”

When traveling to do a workshop for the company, he would build in time to visit nearby aquariums, nature centers and wildlife rehabilitation facilities. He’s photographed animals at places like Connecticut’s Mystic Aquarium and the Alaska SeaLife Center. Still, much of the photography he does happens within Ohio, be it at the Toledo Zoo & Aquarium, Bowling Green State University’s marine biology department or smaller centers throughout the state.

“The two biggest sources of animals I’ve had in terms of facilities I’ve worked with are the Ohio Bird Sanctuary [in Mansfield] and the Brukner Nature Center, which is in Troy,” he says, adding that the Back to the Wild wildlife rehabilitation center in Castalia is a close third.

“That cooperation from a variety of institutions has led to the release of three larger Curious Critters picture books for children, (complete with cute-yet-educational text that FitzSimmons writes in the voice of each creature) as well as 17 smaller board books focused on animals from particular states and one that concentrates solely on birds.

“One of the earlier reviewers, a writer for Scientific American, described it as a coffee table book for kids,” FitzSimmons says of the three larger books: Curious Critters, Curious Critters Volume 2 and Curious Critters Marine. “And that’s exactly what I was aiming for.”

FitzSimmons has also penned two books illustrated by artists: Salamander Dance with Michael DiGiorgio and Wakem The Rooster: Up All Night with Richard Cowdrey. But photography books that worked as art geared toward children are what he says he always felt was missing from those children’s literature conferences he attended with his mother.

“While photography had been depicted in children’s books over the years, highly artistic images were, to my eyes, rare,” FitzSimmons says. “I set out to provide children with photographs that could stand alone as art, not so much as mere depictions of what is in the text.”

So, he and Olivia put a $50,000 investment into self-publishing the first installment of Curious Critters. They sold their initial order of 5,000 copies in four months. The couple has since published each subsequent book under the same Wild Iris Publishing name, which has allowed them to create a profitable enterprise to support themselves and their three children.

FitzSimmons also does author visits at schools, telling his story to kids throughout Ohio. For him, the decision to leave behind academia after the release of the first Curious Critters book was about connecting children and their families to nature.

“I often ask myself, ‘What can I do to help the world?’ And each of us has our own talents,” FitzSimmons says. “Whatever skills and gifts that God has given me, I hope that I am using them in a way to make the world a better place.” 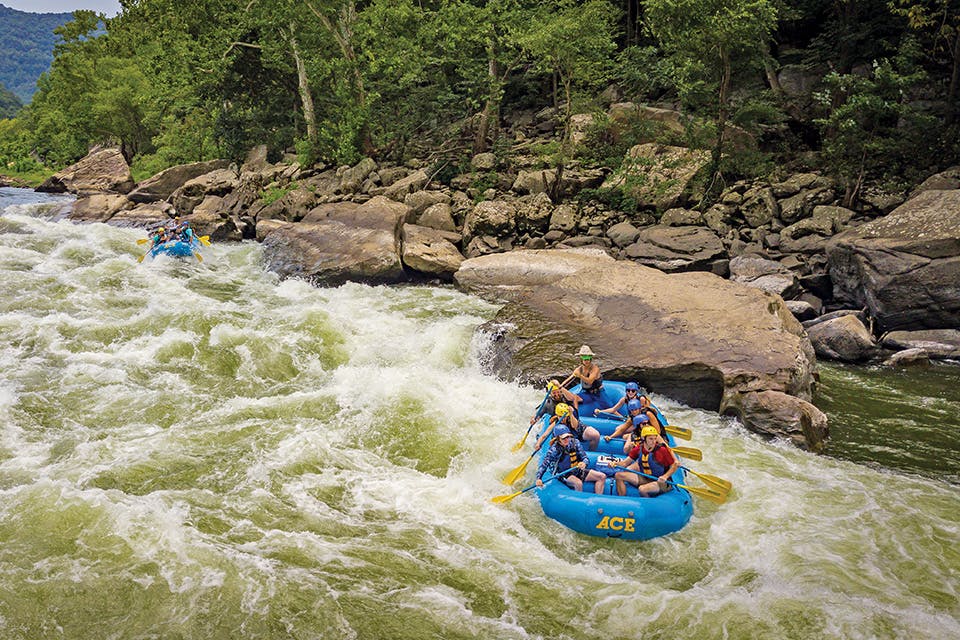 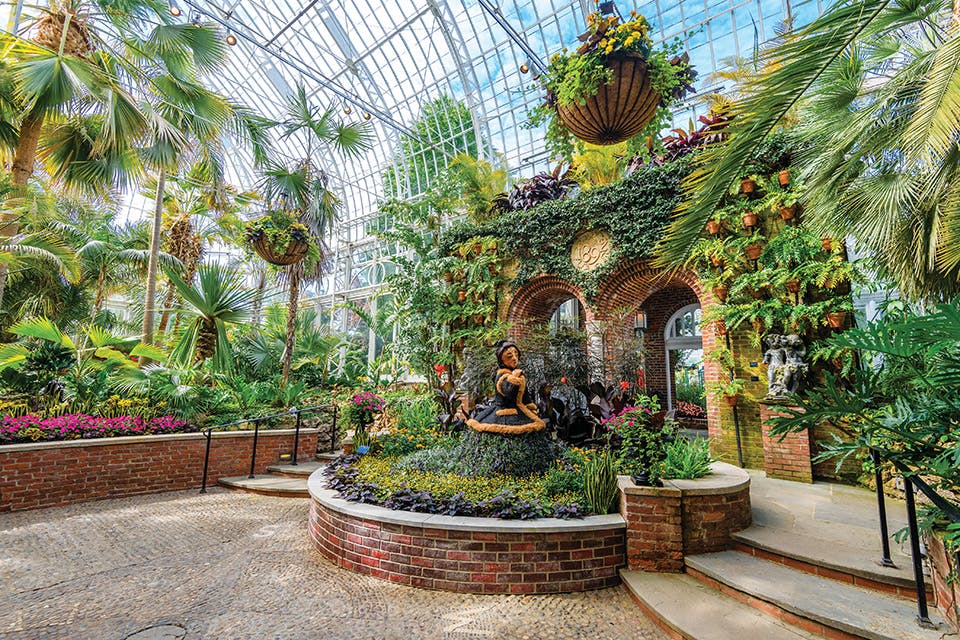