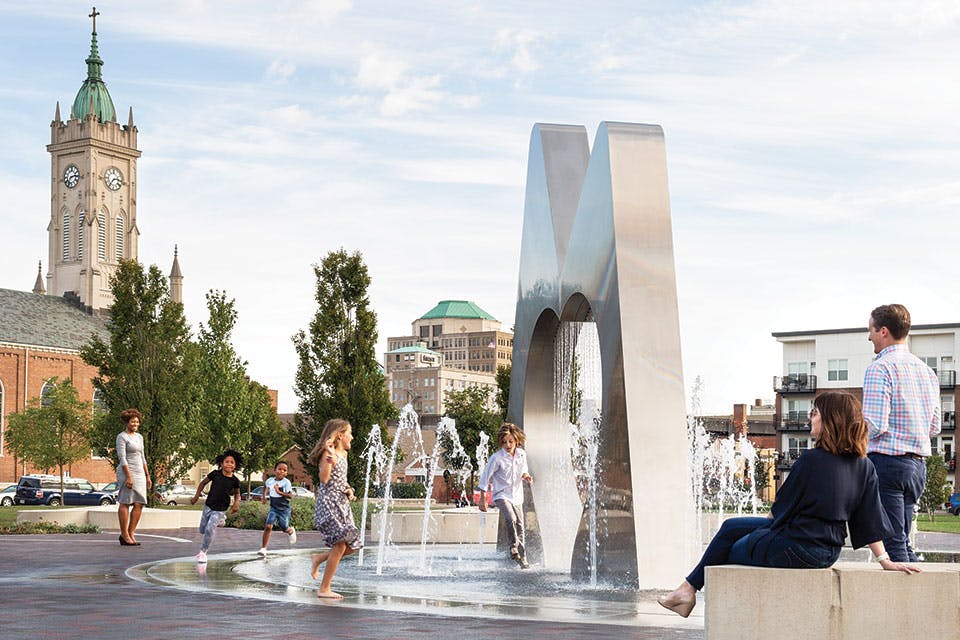 This Butler County community is home to vibrant public art, welcoming businesses and an initiative that unites and highlights the city’s 17 neighborhoods.

It’s easy to find yourself pulled toward Sara’s House. Located in a restored High Street building built in 1875, the small downtown shop has a front door angled to the corner it sits on and large front windows that show off the assortment of cute housewares, soaps and locally made jewelry.

Step inside and you’ll likely find owner Sara Vallandingham pointing her customers toward unique finds, including her shop’s Nine Lives collection of one-of-a-kind lamps and furniture pieces crafted by her husband Dave. One lamp is made from a 1920s headlight, another from an old ship light.

“We have a lamp made from a really cool motor-oil can,” Vallandingham says. “What [Dave] was drawn to was that it’s from Hamilton, Ohio … People love connecting with their past.” 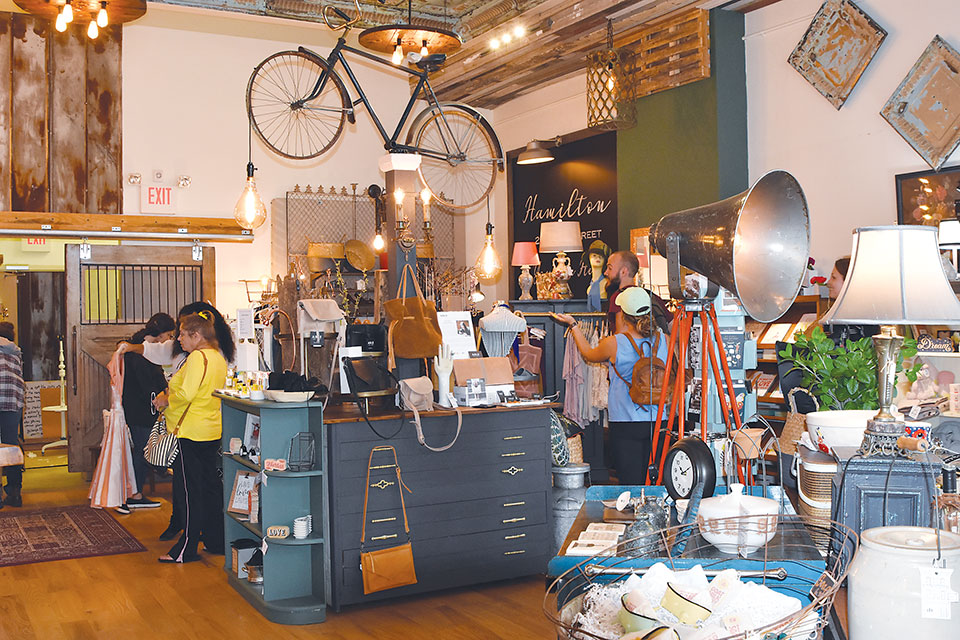 Hamilton’s history stretches back to 1791 with the establishment of Fort Hamilton along the Great Miami River. By the mid-19th century, the city was a hot spot for manufacturing, but the industry waned following World War II. Despite the adverse affects a changing industrial society had on the city during the 1900s, health care, manufacturing and education — both in the Hamilton City School District and at Miami University — are among the area’s top employers. Building restoration and the addition of new public parks and art followed. Today, Hamilton is home to approximately 63,000 residents and covers 22 square miles.

A statue of founding father Alexander Hamilton greets motorists and pedestrians in the crosswalk outside The Almond Sisters Bakery. (The cast of the touring version of the Broadway musical “Hamilton” even posed with the 12-foot-4-inch-tall bronze statue while visiting the city.) Sculptor Kristen Visbal, whose “Fearless Girl” statue immediately garnered attention when it was installed opposite the “Charging Bull” on New York City’s Wall Street in 2017, created the statue of Hamilton’s namesake in 2004. It’s one of 55 art pieces throughout the community, which has been nicknamed the city of sculpture. (Hamilton’s more-than-300-acre Pyramid Hill Sculpture Park is home to over 80 additional outdoor sculptures.) Then there are the colorful murals, including one paying tribute to Hamilton native and beloved writer and children’s book illustrator Robert McCloskey. 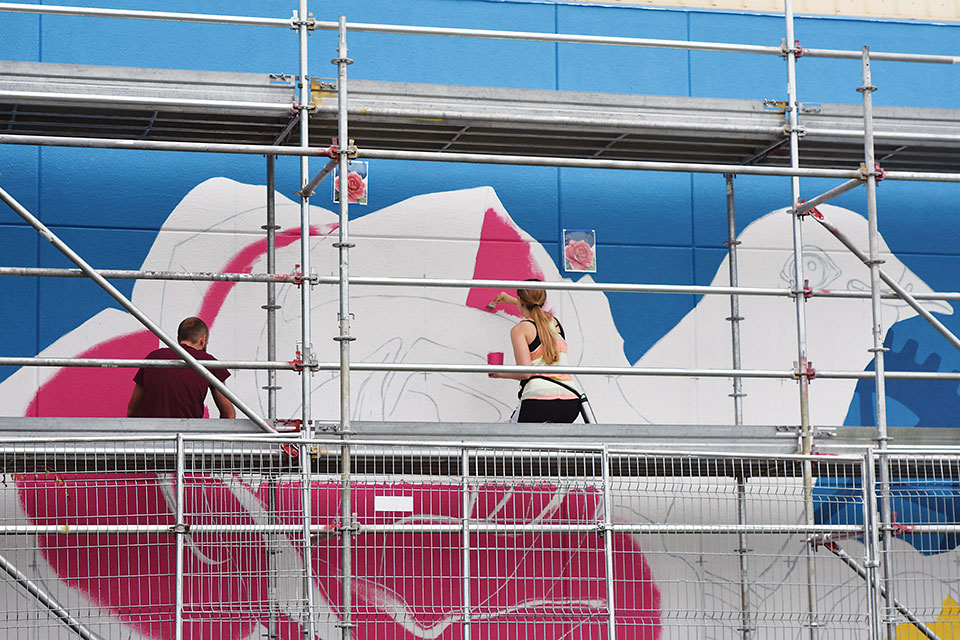 Hamilton embraces the arts with murals and sculptures throughout the city. (photo by Rachael Jirousek)

The nonprofit arts organization hosts visual and performing arts events, workshops and classes, art shows and more. The Fitton Center also partners with the city and the Hamilton Community Foundation for StreetSpark. Since 2016, the program has overseen the installation of 11 murals, including three that premiered this summer.

“It’s about artist engagement and giving a sense of life and color and vibrancy to a city,” says MacKenzie-Thurley. “All the artists are paid and there’s always a learning artist or apprentice. We want to make this a place where artists can earn a living.” Just as murals and public artworks have played a role in Hamilton’s progress, so too has the restoration of historic buildings. One example is the 1875 structure that Sara’s House occupies on High Street. Before Vallandingham moved her business there, unattractive blue siding covered up the character and charm of the three-story structure. She received help in the restoration process from Hamilton’s Consortium for Ongoing Reinvestment Efforts, known as the CORE Fund.

The public-private partnership provides financial resources with lower-interest capital for projects that help revitalize urban core neighborhoods, ranging from the restoration of Sara’s House to the transformation of the 160,000-square-foot former Elder-Beerman department store, which had been a large vacancy in the heart of downtown since 2009, into mixed-use space. The fund was also instrumental in overhauling an old building that’s now the site of The Davis — modern, upscale apartments in Hamilton’s Historic Main Street Business District. At street level, the turn-of-the-20th-century building is anchored by the Village Parlor ice cream shop. More than 25 neighboring businesses include Rustic Home, True West Coffee, Two Little Buds florist and the stationery and gift shop Scripted Studio. 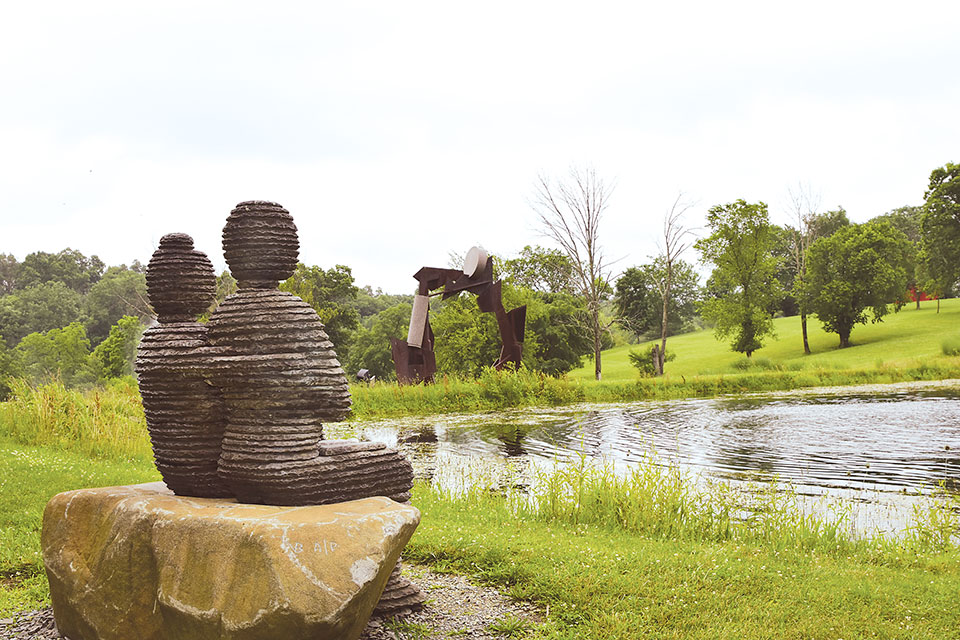 “It’s a catalytic fund,” says Mayor Pat Moeller. “It has been a fund to repurpose and bring back to life what could’ve been in a blight situation for a long time.”

Another point of community pride has been the creation of Marcum Park. The 5.6-acre green space features gardens, a heart-shaped fountain and the RiversEdge Amphitheater. The Marcum, a 102-unit luxury apartment complex that opened in 2018, faces the park. In 2018, the American Planning Association named the park one of the Great Public Spaces in America. The association recognizes neighborhoods, streets and parks each year that foster stronger communities thanks to the planning efforts of that city.

Hamilton is home to approximately 50 parks in all, many of which are located within the city’s 17 neighborhoods. This includes Dayton Lane, a neighborhood on the National Register of Historic Places that’s filled with the turn-of-the-20th-century residences of Hamilton’s industrial elite; German Village, a historic district that was the initial plat outside of Fort Hamilton in 1796; and Highland Park, a traditional residential neighborhood named after the original subdivision given that name in 1919. 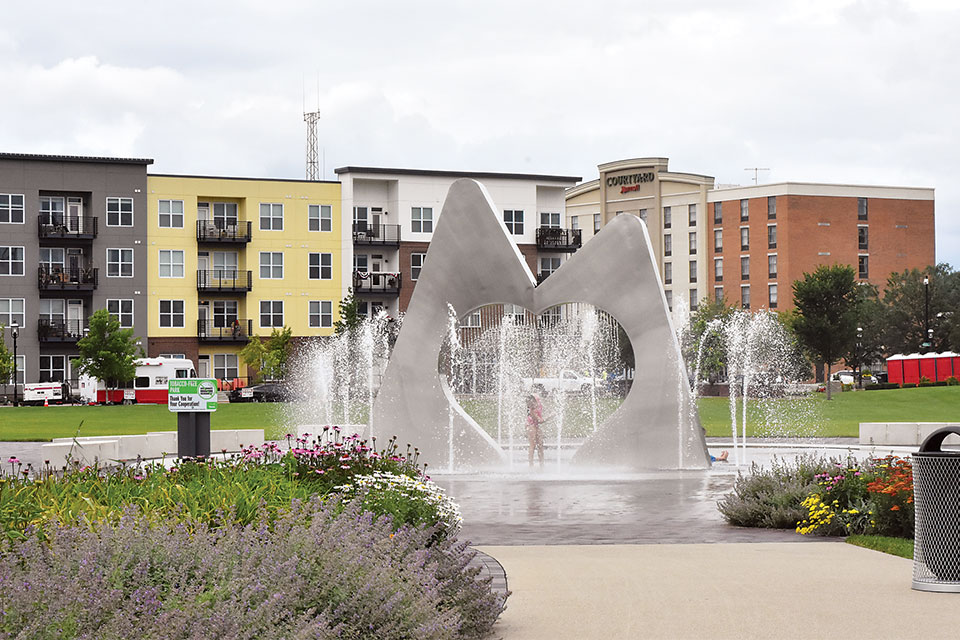 Marcum Park on the Hamilton riverfront features gardens and an amphitheater. (photo by Rachael Jirousek)

Community pride has been boosted since the creation of the 17 Strong Advisory Board, a citizen-led effort that allows residents to advocate for the needs and wants of their neighborhood. Whether that’s a new crosswalk, a movie in the park or a block party, the city of Hamilton awards micro grants for 17 Strong initiatives.

Community activism and volunteerism thrives here, whether it’s the monthly Hamilton Flea, the RiversEdge amphitheater concert series or the popular fall festival, Operation Pumpkin. Vallandingham attributes that level of involvement to an appreciation and love for where the city has been and how far it’s come.

“What makes it so special to Hamiltonians is the struggle they had to go through and keep their spirits up … when things weren’t what they are now,” she says. “It’s a restoration story and redemption story, and for the people who witnessed it, it makes this season so much sweeter.”