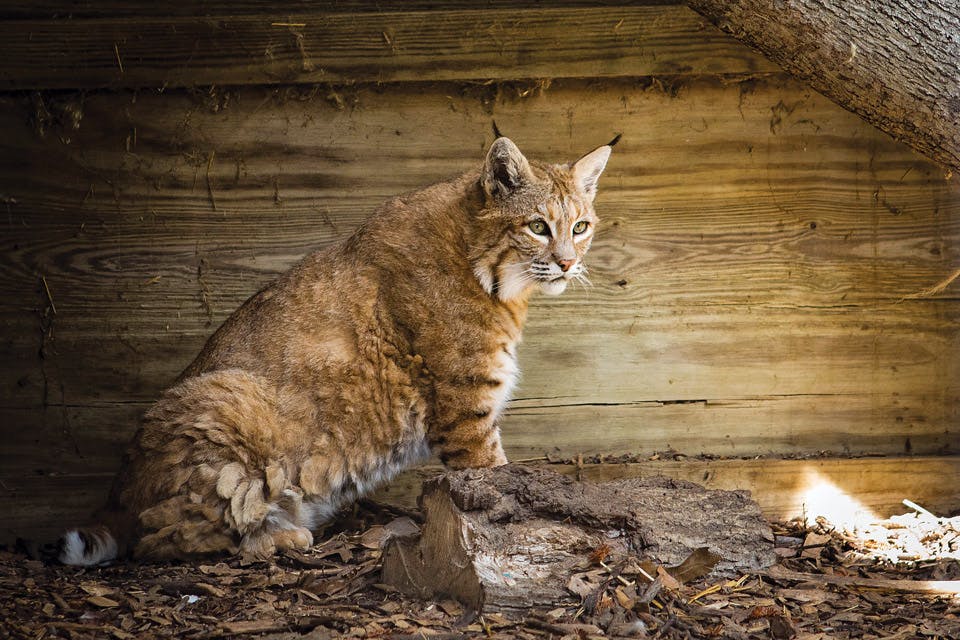 Mona Rutger founded Back to the Wild in 1990 as a place to nurse injured animals back to health. Over the course of a year, the center is home to more than 2,500 creatures, ranging from owls to butterflies.

When Mona Rutger was a child growing up on a farm between Sandusky and Castalia, she awoke one night to hear a cat crying outside her window. It wasn’t hers, and she didn’t know whose it was. But that didn’t stop the animal-obsessed kid from convincing her mother to bring the feline in, where it promptly gave birth to kittens that night.

“I loved to be around animals, and it didn’t matter which ones,” Rutger recalls. “I wanted to know every bird I saw. Even insects. I just had to know.”

That obsession didn’t abate with age. In 1976, after she and her husband, Bill, purchased 10 acres near Castalia as a sanctuary for themselves, people started bringing Rutger sick or wounded animals that needed help.

“You know about animals,” they’d say to Rutger, based on her farm upbringing and work she’d done for the Ohio Division of Wildlife and Erie MetroParks. “Can’t you help?”

As a private citizen, she was by law not permitted to get involved and that bothered her. 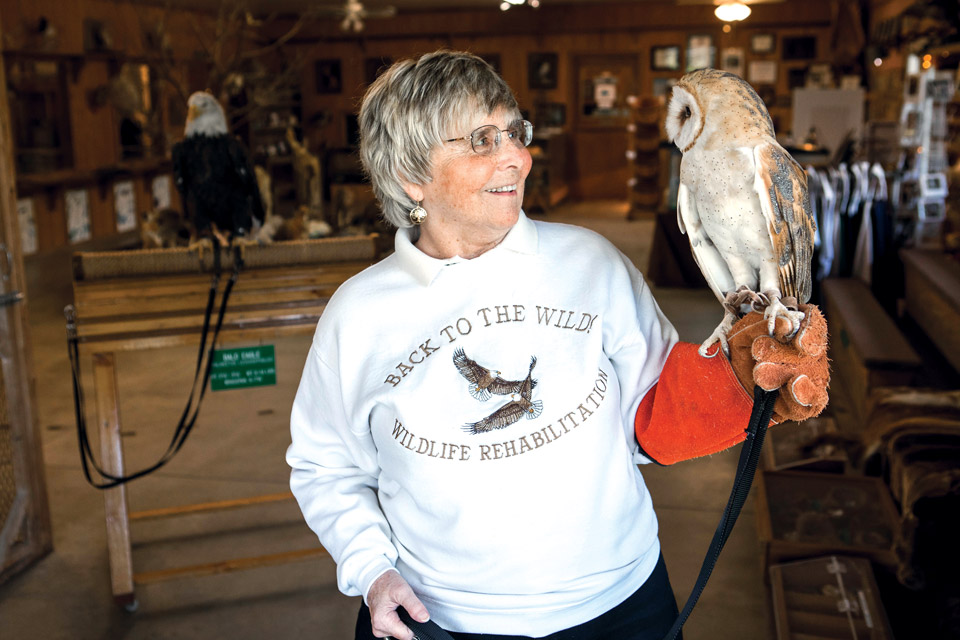 Foxes, box turtles, a horned owl and a barn owl — pictured here with rehabilitation center founder Mona Rutger — are among the creatures Back to the Wild helps. (photo by Laura Watilo Blake)

“I’d call the state and they’d say, ‘Put it in the woods and let nature take its course,’” Rutger recalls. There’s nothing inherently wrong with that advice, she adds, but studies show that 90 percent of injuries to wild animals are caused by human interference.

“That animal wouldn’t be hurt if it weren’t for humans altering their habitat or completely erasing it,” Rutger explains. “I started thinking, There’s got to be somebody that can take care of these wild animals.”

So Rutger earned her state license as an animal rehabilitator and, in 1990, she and Bill added 20 acres to their 10-acre property, built a new barn and opened Back to the Wild, rehabilitating any type of wild injured animal permitted by state law.

Today, the Back to the Wild campus includes seven buildings and a variety of freestanding cages, accommodating everything from tortoises to bobcats to marsh birds. Earlier this year, health problems forced Rutger to take a more limited role at the center, but she still lives on the property with Bill and remains a board member of the organization, which has developed an additional focus over the years.

“The reason we’re doing this,” Rutger says, “is to educate people.”

At any given time, there are typically between 150 and 300 animals being rehabilitated at Back to the Wild. The ultimate goal is for each creature to be returned to nature. Although some people don’t believe wild animals can survive upon release, Rutger says she has seen birds still banded from when she treated them a decade earlier.

Other animals simply can’t be reintroduced to nature, so they reside at Back to the Wild full time. Some birds, for example, are used as surrogate parents to help raise fledglings that end up at the center.

Other full-time residents are used as teaching animals. There are around 130 of these species ambassadors residing at Back to the Wild. They aren’t named either, a touch that communicates the fact that these creatures are not meant to be pets. 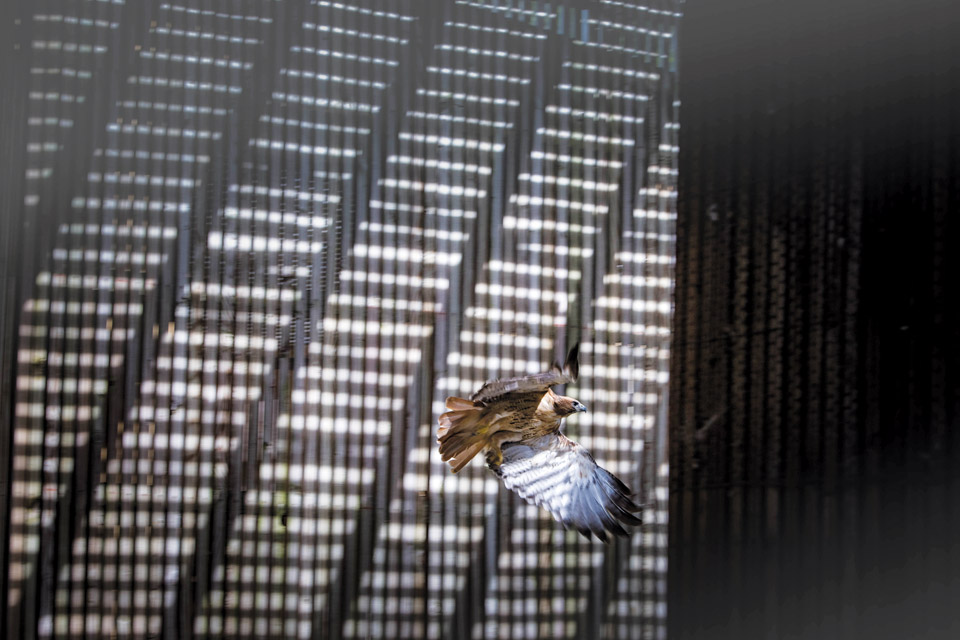 A red-tailed hawk flies in the rehabilitation cage at Back to the Wild. (photo by Laura Watilo Blake)

One of Back to the Wild’s longtime residents is a bobcat. Although the animals are starting to be seen again in central and southern Ohio, this one is from Arizona, where it was taken by law enforcement from someone who captured it to keep as a pet and had it declawed.

“Which is very illegal,” says Heather Tuttle, who started at Back to the Wild as a volunteer 15 years ago before becoming the center’s manager five years ago.

The bobcat’s cage is not far away from three foxes: two red and one arctic species. They use musk to mark their territory, making them decidedly less appealing to keep in one’s home.

The educational message continues almost daily, with Back to the Wild busy throughout the school year. Student groups visit from Ohio, Michigan and Pennsylvania, and the facility is also open to the public by appointment.

“I found out when I started teaching people about the natural histories of animals and what wild animals do, it was such a passionate thing for me,” Rutger says. “It just came out of me.”

And the lessons stick. Rutger has received calls from parents whose children told them not to check on baby animals. (People leave a scent trail, potentially leading predators to baby animals that may not have the same defense mechanisms that adults do.) She also notes that a seemingly unattended baby bird probably isn’t really unattended.

“Parents hide them,” Rutger says. “You watch that bird for half an hour, someone will come and feed it … We’ve probably prevented a lot of animals from being unnecessarily rescued.”

There are only a few animals that Back to the Wild won’t handle. The organization is banned from taking in fawns or coyotes, and raccoons pose a potentially grave health hazard.

“Raccoons carry a very dangerous parasite, a roundworm that transfers to humans,” Rutger explains. “We’re talking 98 percent of them have it. The larva gets into humans’ digestive tracts and then migrates through our body usually to the brain. People lose their balance and go blind, and it’s fatal.”

In some instances, the center must euthanize animals that have come into its care. Rutger says she’s seen screech owls with their legs cut off by a chainsaw (thinking that it’s a predator when they hear it, the owl’s defense mechanism is to stand still), as well as animals with broken necks or backs. It’s a hard decision, but it ends an animal’s suffering. Otherwise, Back to the Wild tries not to interfere with nature taking its course.

After 28 years, Rutger is pleased to see what the center has become, but she has two things she’d like to change. First, she’d like to increase full-time staff.

“We’re running the center with about five people and we need 15 to 20 easily,” she says.

Secondly, Rutger would like to get a circular flight cage, which allows rehabilitating birds to get back into shape. Back to the Wild has an L-shaped cage, but birds have to stop flying to turn around. An oval cage allows them to fly continuously. That, however, takes money. Back to the Wild is a nonprofit organization, but even in its third decade of operation, some still don’t realize the center doesn’t receive government funding.

“People say, ‘I pay my taxes and I’ve got an animal for you to take care of,’ ” Rutger says. A request for help is one that she won’t turn down if there’s a way to accommodate it. As she says, “There’s no place else for the animals to go.”