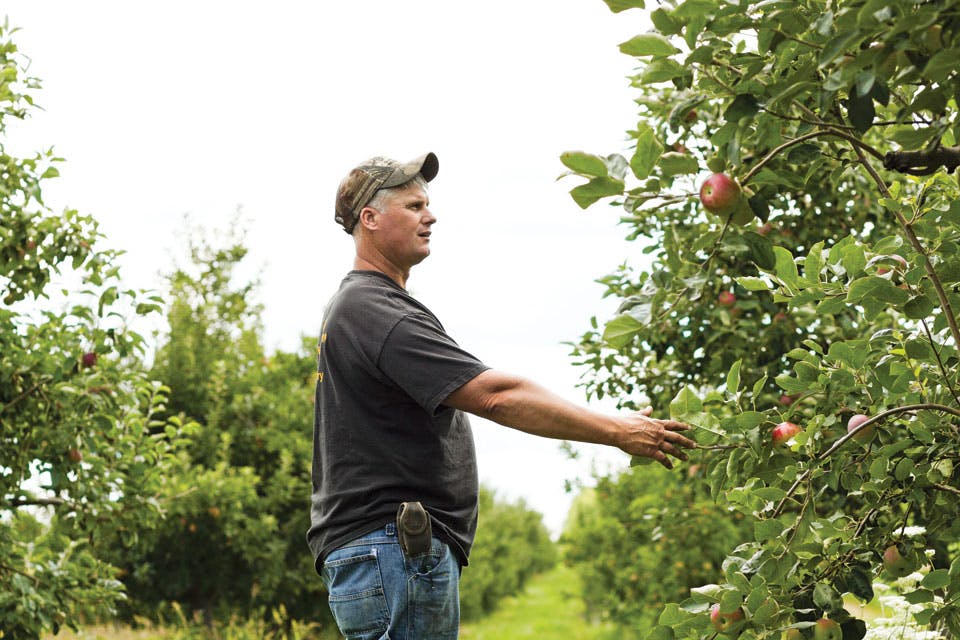 Allen Grobe’s farm has been around for more than a century. Now, he is readying it for what comes next.

Allen Grobe doesn’t really drive his pickup truck across his 800-acre apple farm as much as he charges through the orchards like he’s rounding up the rows. The 44-year-old’s tan and muscular arms grasp the steering wheel with determination as his truck bounces over the uneven fields and dirt roads of the Elyria farm his great-great-grandfather, Henry Grobe, started in 1905.

“I always knew I would stay on the farm,” says Grobe, who grew up in these fields. “Is there anything else to do in the world?”

The operation was handed down to Walter, Robert and Jim Grobe prior to Allen taking over 17 years ago, following his father’s death. Grobe’s sons, Brett, 19, and Keith, 16, are the sixth generation of family farmers.

Originally, the farm produced potatoes and dairy products, but it now focuses primarily on apples and cider. In fact, Grobe Fruit Farm has been selling fruits and vegetables since 1949. That means the family has seen its share of challenges, from forces of nature to a shifting regulatory landscape that has required the farm to evolve.

“A farmer is like a rabbit out in a field — everyone wants to attack it,” Grobe explains. “I fight the weather, government regulations and labor problems. Those are the things that keep you up at night.” 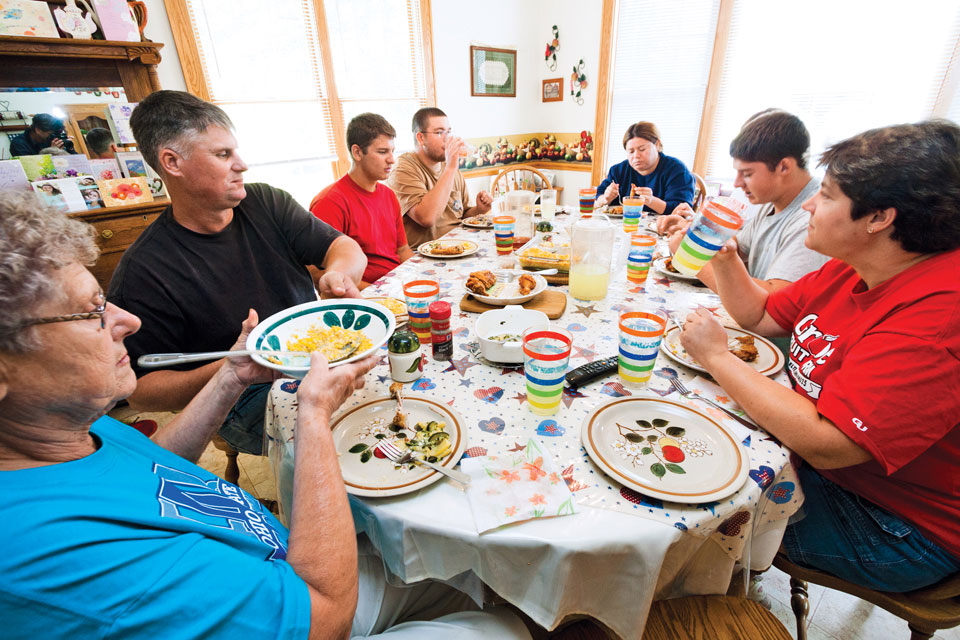 "Fruit and vegetable growers are different kinds of people," says Allen Grobe. "Our train of thought is, there is no tomorrow. If you have to spray that day, or it's a day to pick apples, that is what you do. It doesn't matter what else you might want to do." (photo by Jerry Mann)


Like a speedy rabbit, Grobe, who doesn’t take a day off from his farm work “from the Fourth of July until we eat turkey” has outrun the predators. But that doesn’t mean there haven’t been times over the years when he has worried about his farm’s fate.

“My father, grandfather and I would always stand in that garage doorway talking,” Grobe recalls, parking the truck and pointing to a large, slightly weathered pole barn. “Then my father died and my grandfather two years later. It was devastating. I was alone in the doorway.”

Along the way, government regulations concerning the making of apple cider and apple packing challenged the farm’s ability to remain competitive among Ohio’s wholesale apple growers. Updates were necessary, starting in the field. It was either adapt or perish. Grobe, his wife, and his sister Anita Edwards and her family had to make serious decisions about the direction the farm would take.

For starters, forget the traditional apple tree. Most of Grobe Fruit Farm’s apples are now grown using the tall-spindle method. Trees are severely pruned and trained to grow on a trellis system, which Grobe is constantly looking to improve. Instead of planting 275 trees per acre, as his dad and grandfather did, Grobe can now grow 1,000. Varieties include Fuji, Gala, Honeycrisp, McIntosh, Golden Delicious, Red Delicious and others.

Apple packaging has also gone from a by-hand method to automation. The Grobes’ mammoth computer grader is an assembly-line-like machine imported from New Zealand that sorts by color, weight and size. It also bags specific orders for different retail stores and Ohio schools. Allen’s wife, Laurie, who is also responsible for payroll, bookkeeping and food safety, programs the computer.

Technology is at the core of most changes on the farm. Grobe plucks an imaginary apple from an invisible tree and buffs it on his shirt. That was the old-fashioned way of getting fruit ready for market, he explains. Today, apples are treated with a wash that kills bacteria, and they will soon be tagged and digitally tracked during their time on the farm. Grobe currently practices what he calls “tractor-seat supervision,” but he says computerized records will allow him to evaluate crops from his office chair within the next year or so.

According to the Fruit Growers Marketing Association, a producer-owned marketing cooperative of which Grobe is a member, no one in the United States delivers more apple varieties, sizes and grades than Ohio farms. 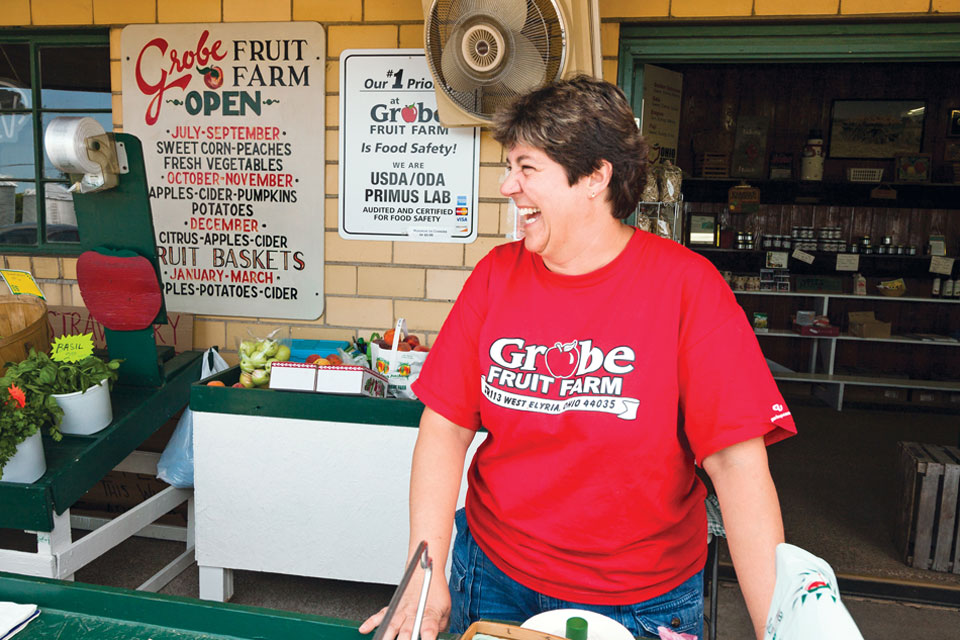 Allen Grobe's wife, Laurie (above), their sons and Allen's mother, Annette, all work the family farm in Elyria. (photo by Jerry Mann)


“Fruit and vegetable growers are different kinds of people,” explains Grobe. “Our train of thought is, there is no tomorrow. If you have to spray that day, or it’s a day to pick apples, that is what you do. It doesn’t matter what else you might want to do.”

This summer, Grobe’s sons and nephew Tyler Edwards prepared an existing 12 acres of farmland to grow 11,000 additional apple trees. Grobe says he doesn’t see the need to expand the farm’s acreage beyond what it is now, preferring instead to concentrate on increased yields.

“I work for my sons like my dad did for me. When I was in school, I told my dad I wanted to play football like everyone else. He told me I could carry a corn basket across the field any time instead,” Grobe recalls. “Now, I understand what he was trying to tell me. This is a family farm and that’s what makes it successful. Even my mom still helps out.”

It’s also a community farm. Three generations of residents from Lorain County and beyond come to the on-site retail store, which was recently expanded and renovated. Each fall, families take photos of their kids in front of the mounds of pumpkins circling the farm’s black walnut tree. They also buy sweet corn to eat fresh or freeze. And of course, the apples and cider are part of the region’s culture. Grobe Fruit Farm produces 200,000 gallons of cider and grows 50,000 to 75,000 bushels of apples annually.

“My sons didn’t go to school with any other kids who grew up on a farm,” says Grobe, who finds that sad, but indicative of modern life. “People around here appreciate what we do.”

From time to time, he sees that appreciation firsthand. Farmers view their tractors as their most prized possession — the very heart of the farm. Every so often Grobe will find another one sitting in his driveway. “Neighbors leave us their tractors in their wills,” he explains. “They know this apple farm will go on.”