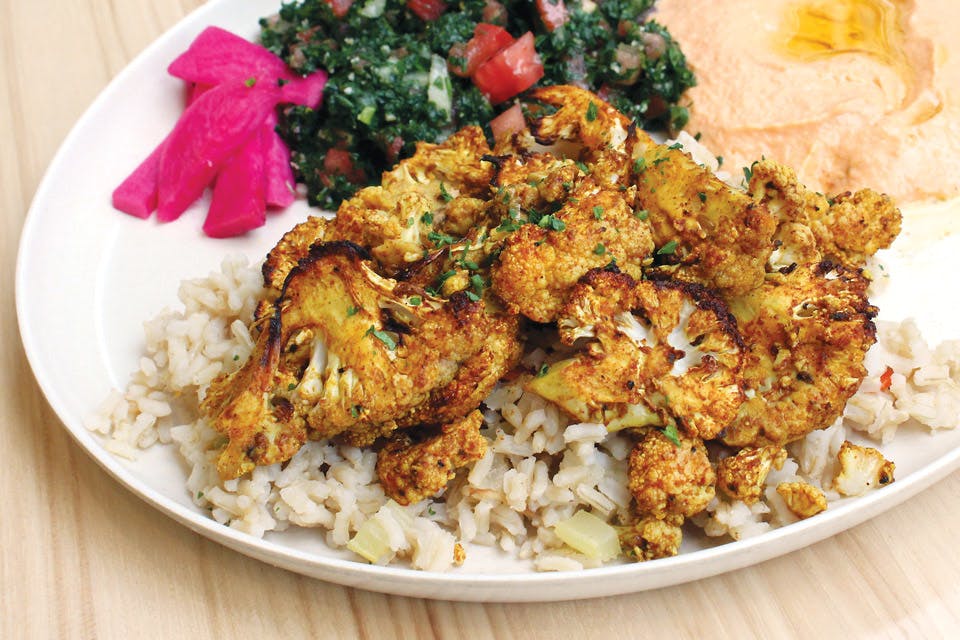 During the summer of 2017, Cleveland’s Playhouse Square gained a new star in the form of Zaytoon Lebanese Kitchen. Tucked away on Huron Road, just a few steps from the Theater District’s iconic outdoor chandelier, the spot has become a popular spot for weekday workers, downtown dwellers and theatergoers popping in for a quick bite before a show Wednesday through Saturday.

“We love the neighborhood,” says David Ina, owner and head chef at Zaytoon. “It’s very vibrant. There’s a lot going on with the shows and the hotels so close. So many apartments are opening up left and right, so we’re seeing a really good mix.”

Zaytoon’s menu of Mediterranean-inspired eats includes a variety of rolled pitas, soups, salads, hummus and more. Its entrees are composed plates served with pita bread and featuring chicken, beef or falafel. The cauliflower shawarma stands out with brown rice, pickled turnips, cilantro chutney and choice of two sides. The dish starts with the marinade, which Ina says is a mix of cumin, turmeric, allspice, paprika, garlic, lemon, vinegar and oil. He cuts the cauliflower into florets, which are then marinated, roasted and caramelized using the mixture. (The dish is also available in a rolled pita version.)

“The marinade elevates the cauliflower to a different level,” Ina says.

The chef got his start when he and a friend opened the food truck Hot Pita: Mediterranean Street Food at The Ohio State University. After college, he moved from Columbus to Cleveland, working various places including Al’s Deli, his parents’ American eatery that also serves Middle Eastern specialties. When the Huron Road space became available, he signed the lease with a concept in mind.

“I knew immediately I wanted to do Lebanese-focused, lunch-driven [food] — get people their lunch quickly, not waste too much time,” Ina says. “[It’s] not too expensive but still very fresh and healthy and full of nutrients.” 1150 Huron Rd., Cleveland 44115, 216/795-5000, zaytoonlebanesekitchen.com