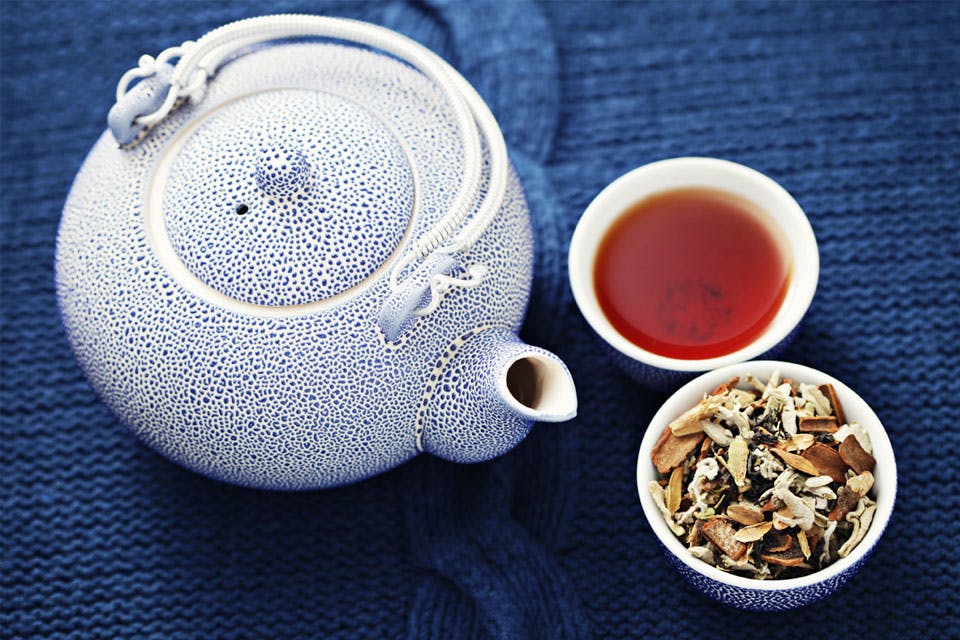 For those who want to go beyond Earl Grey and orange spice, here are 12 fresh tastes to seek out.


You may be satisfied with your old, reliable chamomile, but it turns out there is a world of flavors to discover once you think outside the prepackaged tea bag. Besides, the centuries-old beverage is more than just an enjoyable refreshment. Black teas have been shown to be effective in preventing heart disease, oolongs boost metabolism and herbal blends can deliver relaxation and decongestion. But walking into a shop that sells loose-leaf tea can be intimidating. We asked five tea shop owners from across the state to help us decipher the unusual names and point out some of the teas popular with their customers, so you can branch out while warming up.

Walnut Crunch: This flavor offers a twist on the traditional green tea. “A lot of green teas are blended with dried fruit or a citrus or a flower petal,” explains Merriman of this in-house blend. “This is a different approach. It gives more of a buttery, nutty taste. There is still a slight sweetness from the pineapple. It’s very unique.”

Matcha: To maximize the health benefits from a cup of tea, turn to matcha. “It is in a powder form, therefore you consume it entirely,” explains Merriman. “It gives the consumer a higher concentration of green tea antioxidants, vitamins, minerals and fibers.” It also delivers a boost of energy, sometimes lasting up to six hours. Merriman blends her matcha with dried blueberries, dried mango or vanilla powder.

Orange Ginger Pu-erh: Pu-erh teas undergo fermentation, resulting in a dark, heavy cup with an earthy body that matures over time. “Pu-erh tea improves with age just as wine does,” says Holcepl. “Our [Orange Ginger Pu-erh] is an interesting change of pace. It is very earthy, but the ginger and brightness of the orange help lift the notes to a nice level.”

Organic Roasted Kukicha: Coffee drinkers looking to transition to tea will find a subtle familiarity in kukicha teas. “Kukicha is a tea from Japan that isn’t really a tea even though it comes from the tea plant,” explains Holcepl. The stems, stalks and twigs of the tea plant are picked instead of the leaves, and then roasted. “The tea has a nice delicate flavor, but the roastiness approaches coffee.”

Ceylon Ruhuna: Ceylon teas hail from Sri Lanka, and the country’s full-bodied Ruhuna teas are specifically cultivated in its southernmost growing district. “This is my go-to morning tea,” says Holcepl. “Imagine what a Lipton should taste like — what you want it to taste like … dark, rich with a good chewy mouth feel and slight stone fruit and raisin sweetness.”

Hot Cinnamon Tea: This tea is packed with cinnamon, which brings the heat but also has health benefits. “All of the cinnamon makes it good at lowering blood pressure,” says Moore. Plus, she says this restorative couldn’t be more palatable. “It tastes like there are Red Hots in [the tea],” she explains, referring to the popular candy. “There is absolutely no sugar added, but it tastes like it’s sweet.”

Apple Tower Crunch: The land in which tea is grown helps to determine part of its final flavor, but North American shop owners and tea companies also like to add spices, herbs and natural food oils to enhance or change a tea’s profile. Moore does just that in creating her fruit-flavored Apple Tower Crunch. “We are known as apple town,” she says. “It tastes like a Granny Smith apple pie.”

Wild Orchid Oolong: Oolong teas can be re-steeped multiple times a day with different flavors opening up along the way. “One thing that I always detect in an oolong, especially in the first infusion, is a nutty, grainy texture,” Terman says. “That is from [the leaves’] partial oxidation.” She adds that it’s around the third infusion that the wild orchid note in this oolong starts surfacing.

Snow Bud: “White teas are processed less than other teas and should be allowed to air dry,” Terman says of this delicate variety. Just the two leaves and the bud at the end of each stem are picked and gently handled for a white tea. “You can tell by the color of the [final cup] how delicate it is,” says Terman. Her shop’s Snow Bud gives off a mellow sweetness and a creamy smoothness.

Monk’s Green: Scented by a tiny white flower called osmanthus, this tea naturally imparts a soft fruity flavor. “They literally layer the tea with petals and allow it to sit,” explains Terman. “Osmanthus flowers smell like peaches. It is not a flavored tea, but you still get the faintest whiff of peach,” she adds.

Genmaicha Organic Green: This richly flavored Japanese green tea mixed with roasted brown rice comes in two blends at Churchill’s Fine Teas. Sencha leaves, the first to be harvested, make up a delicately sweet and highly aromatic version, while bancha leaves, harvested in summer or late fall, offer a more workaday, robust cup. “The bancha is a bolder tea because of the heartier second flush of leaves,” Kern explains.

Weight, Time & Temperature
The Tea Lab shared the guidelines it provides customers for proper weights, water temperatures and brew times for common tea varieties. Recommendations are based on an 8-to-10-ounce cup of tea.

How To: The Perfect Steep
Making tea is simple, but attention to detail is what ensures a great cup.

1. Weigh it Out:The magic ratio when brewing a cup of tea is one level teaspoon of loose-leaf tea to six ounces of water. If you are up for more precision, Bob Holcepl, owner of The Tea Lab in Cleveland and Lakewood, suggests going by weight. “We recommend you do it because all of the teas have different densities,” he says. “You can buy an inexpensive gram scale.”

2. Water Quality: Lori Moore, owner of The Tea Caddy in Jackson, insists on using filtered, spring or distilled water. “Use water that is good and pure,” she says. “Draw it cold, too … the air in cold water helps with the flavor.” She adds that you should be sure to bring the water to a rolling boil.

3. Brew Time: “The epitome of a great cup of tea is the right brewing time,” says Kathleen Kern, owner of Churchill’s Fine Teas in Cincinnati. Make sure to follow the instructions the shop owner provided with your tea leaves and set a timer. If leaves are allowed to sit even a minute too long, your cup will turn bitter.