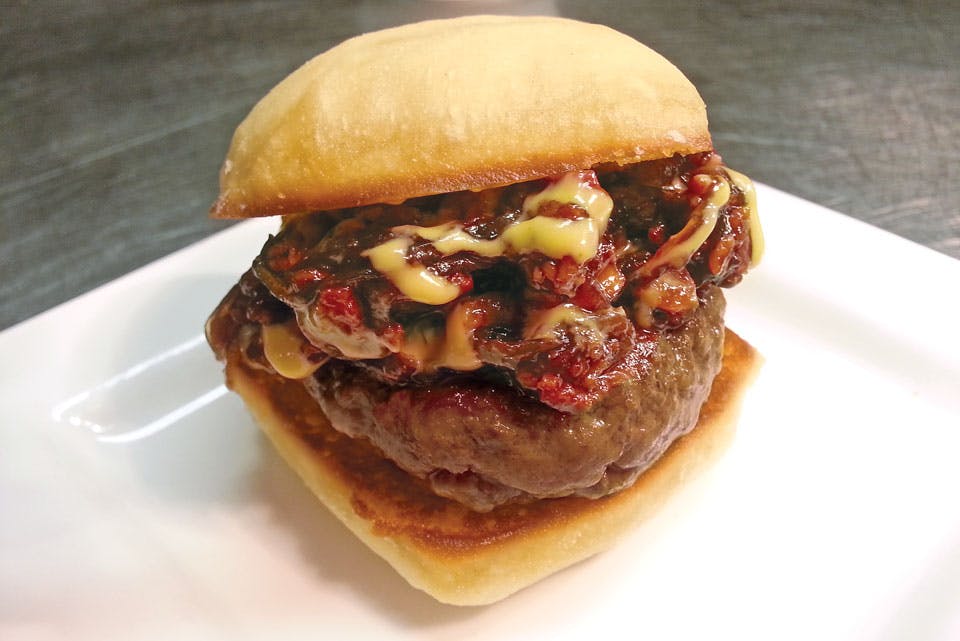 Chef Darin Mitchell of Coco’s Bistro in Dayton shares what he’s cooking up for this year’s bacon festival.

Bacon. It sort of sells itself. Yet, for the past two summers, Darin Mitchell has worked to elevate the beloved strips of cured pork into something even more lovable.

“Last year, we took bacon cheesecakes we had made and deep fried them [in a wonton],” recalls Mitchell, the executive chef at Coco’s Bistro in Dayton. “They were good, and we were a little shocked about it to be honest.”

The experiment was a twist on the savory dessert the chef served at last summer’s Bacon Fest, a free event that celebrates its third year on Aug. 16. More than 10,000 bacon lovers flock to the Fraze Pavilion to sample dishes that make creative use of the day’s star ingredient. Mitchell has taken part every year.

“We get into the theme of using as much bacon as we can,” he says. “We’re just trying to go the extra mile. … It’s amazing how much people love bacon.”

Mitchell should know. After graduating from the Scottsdale Culinary Institute, he studied under chef Mark Tarbell, the winner of “Iron Chef America” season 5, in Arizona before returning to Ohio.

For this year’s Bacon Fest, Mitchell plans to serve bacon sliders with bacon-onion jam. For dessert, bacon creme brulee is on the menu. So, is there anything that doesn’t work with bacon?

“There might be,” says Mitchell, “but I don’t think I’ve found it yet.” 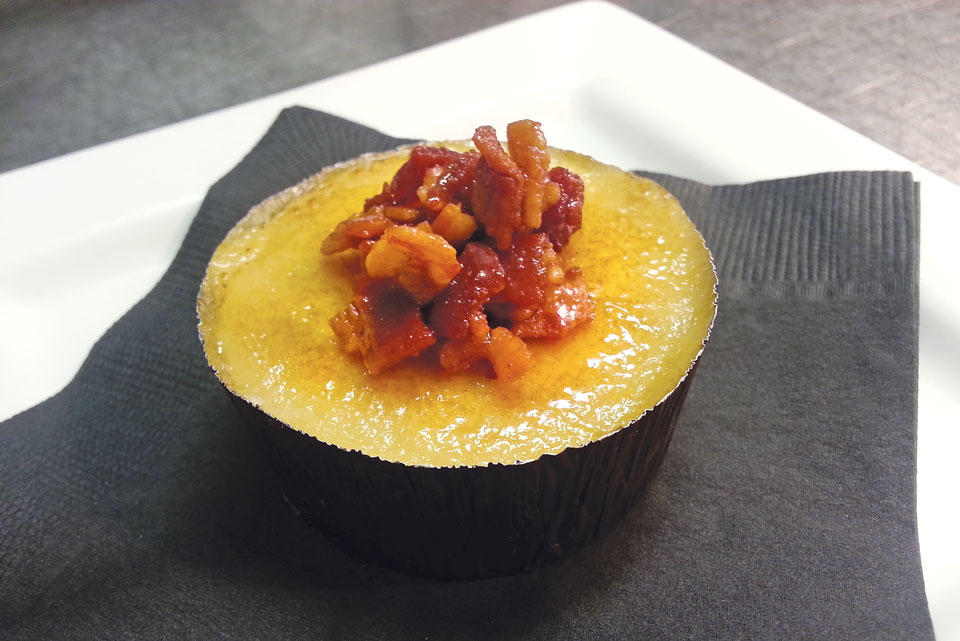 DIRECTIONS
Bring heavy cream, vanilla and salt to a simmer, then remove from heat. In a separate bowl, whisk together egg yolks and sugar thoroughly. Slowly add hot cream mixture to the egg mixture, whisking constantly.

Preheat oven to 300 F. In a saute pan, render bacon until crispy. Remove from pan, drain and add to egg and cream mixture. Divide mixture among the ramekins and arrange in a large baking pan. Pour enough water into the pan to come halfway up the sides of the ramekins.

Carefully place in oven to avoid spilling water into ramekins.

Bake for 15 minutes, then rotate pan and bake for 10 more minutes. (Jiggle ramekins to make sure they are set. Bake longer if needed.) Take ramekins out of water bath, wipe off and let cool. Chill for at least 2 hours before serving.

Once chilled, sprinkle sugar over top and melt the sugar with a brulee torch until it is brown and crunchy. Garnish with candied bacon (recipe below).

DIRECTIONS
Render bacon until crispy. Remove from pan and drain, reserving a small amount of bacon fat in pan. In the same pan, add brown sugar and maple syrup, stirring constantly. When sugar and syrup are thoroughly incorporated, turn off heat and return bacon to pan. Allow to cool.

DIRECTIONS
In large saute pan, render bacon until crispy. Remove bacon from pan and drain, reserving bacon fat in pan. Cook onions in the bacon fat until golden brown, stirring while scraping edges and bottom of pan. Add brown sugar and melt while stirring. Add vinegars, stirring and scraping to deglaze pan. Add mustard. Bring to a simmer, then cook down until it is a syrupy consistency. Season with salt and pepper to taste. Will keep refrigerated for two weeks. Yield: 3/4 to 1 quart

Chef’s Tip: Darin Mitchell will serve this bacon-onion jam on top of his sliders at this year’s Bacon Fest. The mini burgers themselves are made with a hearty dose of bacon, naturally. The ratio he uses is 2.5 parts beef to 1 part diced