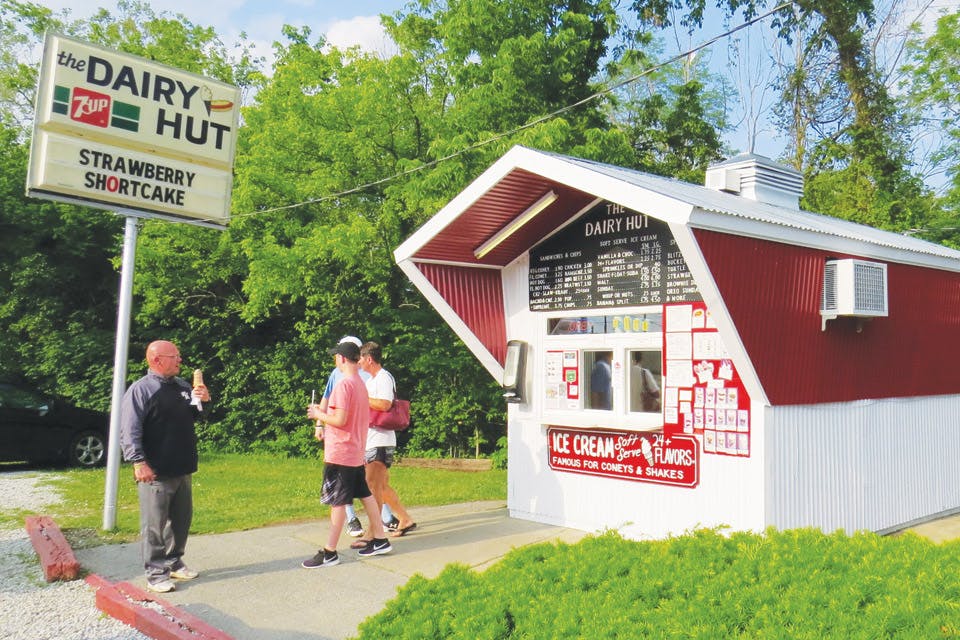 These nostalgia-packed roadside spots are sure to delight the child in all of us.

The Dairy Hut | Pataskala
The Dairy Hut first caught Gary Bocock’s eye while working as a door-to-door milkman with his father. “We told them if they were to sell, let us know,” he recalls. Bocock bought the place in the late 1970s. Today, customers can choose from more than 30 flavors such as buckeye and turtle brownie, along with heavy-duty specialty sundaes that weigh in at a pound each. “We are actually famous for our sandwiches,” Bocock adds. “We have a Coney sauce we have been making for 39 years.” facebook.com/thedairyhutpataskala

Parkside Tasty Treat | Cambridge
This city-owned stand at Northside Park serves scoops of Ohio’s own Velvet Ice Cream alongside fun flavors from New York-based Perry’s Ice Cream. The stand offers 28 flavors, with Velvet’s mint chocolate chip and Buckeye Classic just the start of the flavor fun. “With Perry’s [Ice Cream], we have Movie Time, which is actually popcorn-flavored ice cream,” says manager Steve Lowe. Plus, you can’t beat the location. “We’re right on the edge of the park,” adds Lowe, “right next to the ball diamonds, just across the street from the swimming pool.” facebook.com/parksidetastytreat

Country Maid Ice Cream | Richfield
This ice cream shop dating back to the 1940s sits just outside Cuyahoga Valley National Park, serving as a must-visit spot for outdoor adventurers looking for an afternoon treat. “It’s become a long tradition for people to walk [the park’s] paths and visit us along the way,” says owner Don Torma. Scooping more than 30 flavors of ice cream, sherbet and yogurt, Country Maid also has an on-site orchard with 1,000 apple and peach trees. A small country store located next to the ice cream parlor sells locally grown produce as well as apple butter and cider in the fall. countrymaidicecream.com

The Cone | West Chester
It’s hard to miss the cone-shaped stand along Tylersville Road. Although the eye-catching structure is what draws people in, The Cone’s tasty flavors and shot of nostalgia is what keeps them coming back. “Our orange-vanilla flavor is certainly our No. 1 seller,” says owner Keith Wren. “Nobody duplicates it.” Other fun options include blueberry frozen yogurt, Key lime Italian ice and a buckeye parfait with peanut butter topping. Along with enough outdoor seating for 75 people, The Cone offers outdoor kiddie rides and an indoor arcade with eight pinball machines. thecone.com

Tucker‘s Whippy Dip | Mason
Customers can choose from sundaes, cones, Blizzard-like swirlies and mash-ups of flavored slush and soft serve known as glaciers. But the animal-shaped cones are the most popular. Employees get creative with candy, cookies and other toppings to craft fun characters such as hippos and elephants out of soft serve ice cream. “The kids love them, and we get adults that get them too,” says Linda Spaeth. She’s been co-owner since 1999, but the snack bar has been around since the ’40s. “I have grandparents that came here when they were kids,” Spaeth says, “and now they bring their grandkids.” 513/459-7966

Johnson‘s Real Ice Cream | Bexley
This suburban Columbus shop buys milk from family-owned Ohio farms for its lineup of 65 ice cream flavors that range from salty caramel chocolate pretzel to seasonal peach. “We try to use the best, freshest ingredients we can,” says Matthew Wilcoxon, the store’s owner. His great-grandfather opened the place in 1950, and today’s customers still pass through the shop’s original front door. Summer brings an ice cream challenge, where visitors vie to devour 4 pounds of ice cream in less than 10 minutes. “If you can beat the time, the ice cream is free and you get a T-shirt,” Wilcoxon says. johnsonsrealicecream.com

Tom‘s Ice Cream Bowl | Zanesville
Opened by cousins Jack Hemmer and Tom Mirgon in the 1950s and now owned by Bill Sullivan, this diner-style ice cream parlor serves more than 30 flavors and is known for its banana split, which turns the sundae’s traditional presentation on its head. “They go straight up out of the bowl rather than [served] in a boat,” explains Joe Baker, general manager and ice cream-maker. Because of Zanesville’s pottery heritage, Mirgon served his ice cream in ceramic bowls. Ohioan, astronaut and senator John Glenn was among those known to stop in for “three scoops in a soup bowl,” according to Baker. tomsicecreambowl.com

The Candy Bar | Put-in-Bay
A candy emporium in the front with ice cream in the back, The Candy Bar provides sweet offerings ranging from chocolate-covered bacon to Buckeye Bites ice cream from Sandusky’s Toft Dairy. “We always have specials that are rotating,” says owner Amanda Goaziou, who runs the store with her mother. “I’ve done everything from Twinkie sundaes to using every kind of peanut butter candy and buckeyes to make sundaes.” The Candy Bar’s modern takes on classic tastes is supported by a lineup of nostalgia candies and a new soda fountain to make floats. 419/285-2920

Gypsy Joe‘s Ice cream and Donut Co. | Lancaster
With bright tropical and under-the-sea murals adorning the walls, Gypsy Joe’s Ice Cream and Donut Co. is a kid-friendly oasis that’s been serving residents of Lancaster since 2002. Opened by fourth-generation dairyman Joe Bellmer and his wife, the shop serves 60 flavors and is known for its signature Donut Sundae: your choice of doughnut topped with ice cream, chocolate syrup and nuts. Like any good doughnut shop, coffee rounds out the menu. “Our overall selection and our presentation, I think, is something that you don’t see,” says Bellmer. gypsyjoesicecream.com

Rosati‘s Frozen Custard | Northfield
A huge scoop juts from the roof, reflecting this stand’s 1950s origins and penchant for retro-inspired flavors. “We’re offering modern takes on what might be considered vintage flavors,” says shop manager Jonathan Rosati. Signature flavors include Higbee’s chocolate malt, inspired by the iconic downtown Cleveland department store’s famous treat. A special flavor is available each day alongside the always-available chocolate and vanilla, and the custard is made fresh hourly. “With custard you want to eat it right away,” says Rosati. rosatisfrozencustard.com

Zip Dip Creamy Whip | Cincinnati
A local fixture since 1950, this walk-up spot offers chocolate, vanilla and orange sherbet, as well as two daily frozen yogurt flavors. Shakes, sundaes and flurries are also on the menu, and the hot fudge malt is a customer favorite. “There’s sometimes four generations of one family standing at my window at one time,” says Chris Torbeck, who has owned the business with his wife, Sue, since 1987. The vintage roadside stand has even played host to 50th and 60th anniversary parties for two couples who had their first date at Zip Dip, and it has served as the backdrop for at least one couple’s wedding photos. zip-dip.com

The Village Parlor | Lebanon
This shop opened on July 4, 1969, after the town banded together to turn a downtown bar into an ice cream parlor. One hundred shares of the business were sold to community members, who owned the spot until the Hartsock family who managed the parlor bought it and ran it for the next 35 years. “We still have several of those folks who come in who were original shareholders,” says current owner Aaron Zwelling. The shop serves more than two dozen flavors, including salted caramel chocolate pretzel dip, banana fudge and lemon chiffon. “Those three flavors really stick out,” Zwelling says. “You can’t find those everywhere.” villageparlor.com