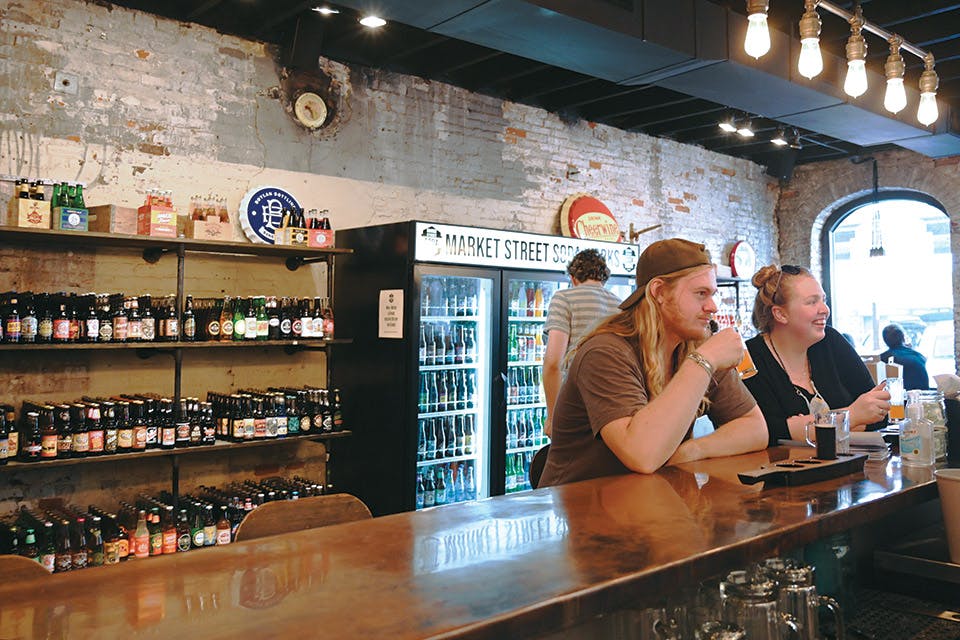 Tim and Liz Argyle’s Newark spot serves up classic favorites and new creations in a cozy and inviting downtown space.

Step beyond Market Street Soda Works’ front door and you’re greeted by cooler cases filled with craft sodas and a long bar with four handles. There’s beer flowing here — root beer that is, from the local Earthworks Brewery and Ohio-based Frostop, as well as cream and black cherry sodas. Since 2016, Tim and Liz Argyle have served draft and bottled sodas from this cozy space in Newark’s Canal Market District.

Inspired by Tim’s lifelong love of root beer, the Argyles’ Market Street Soda Works has become a place where they can work alongside their family and share their appreciation for regionally made sodas as well as retro sodas from the past.

“We love bringing in the hard-to-find things that people loved from their childhood,” says Liz Argyle. “We choose based on customer requests or funky stuff we find that we think would be fun to try.”

Market Street Soda Works’ four tap handles feature options like Ohio-made root beers, Sprecher Brewing Co.’s cream soda and BJ’s Restaurant and Brewhouse’s black cherry soda. Those looking for grab-and-go options can turn to the coolers and shelves stocked with more than 150 varieties, which include favorites from across the United States, such as Moxie (popular in Maine) and Cheerwine (a staple in the South).

The soda bar doesn’t have a kitchen, but it routinely hosts food trucks. The local farmers market (held every Friday from May through October and every Tuesday and Friday from June through September) also creates a flow of curious customers who stop by to see what the place is all about.

Because history is a big part of downtown — from the farmers market pavilion that is built on the site of the old canal to the murals of historic images that adorn building exteriors — Market Street Soda Works embraces the past, too. The Argyles kept the exposed brick interior and built their bar from an elevator shaft that was part of the space. As Tim Argyle says, “We tried hard to make and maintain a connection to the history of the downtown area.”