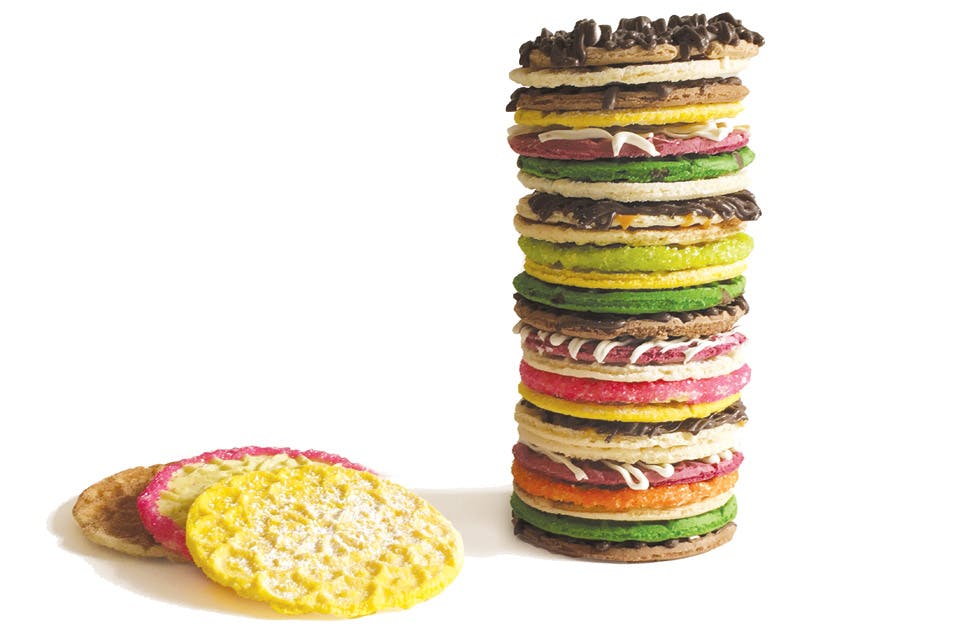 From a young age, Fowler native Christina Benton took orders for cakes and cookies she would bake with her mother. Together, the pair would create commissioned treats for family weddings, graduation parties and reunions.

“We are a very cookie-oriented family,” Benton says. “Cake is okay — and you kind of have to have it — but we always had to have tons of cookies. If you had extra, that’s even better. We always had more than we needed.”

One Christmas season, Benton whipped up more than two dozen different flavors of pizzelles, and her aunt ordered a batch of the traditional Italian waffle cookies. When her aunt told her they were some of the best pizzelles she’d ever had, Benton found the concept for the sweets-based business she had always hoped to launch. Just Pizzelles opened online in 2008, and then in Cortland three years later.

Today, Benton sells traditional anise and vanilla pizzelle varieties alongside a rainbow of more than 90 colors and flavors ranging from margarita to mocha latte. Benton scours trends, desserts, drinks and her friends’ favorite cookies for more flavor ideas. Her treats have even made their way into the superstar sphere. In 2009, Rachael Ray featured Just Pizzelles on her show, and the Oscars included the treats in its 2010 swag bags.

“We’re still eating similarly,” says Beth Carmichael, executive director of the Trumbull County Tourism Bureau. “It just grew from the heritage of Italian families getting together every Sunday and sharing meals.” 204 W. Main St., Cortland 44410, 330/638-8707, justpizzelles.com; visit italianfoodtrail.com for a guide to all the stops along Trumbull County’s Italian Food Trail.