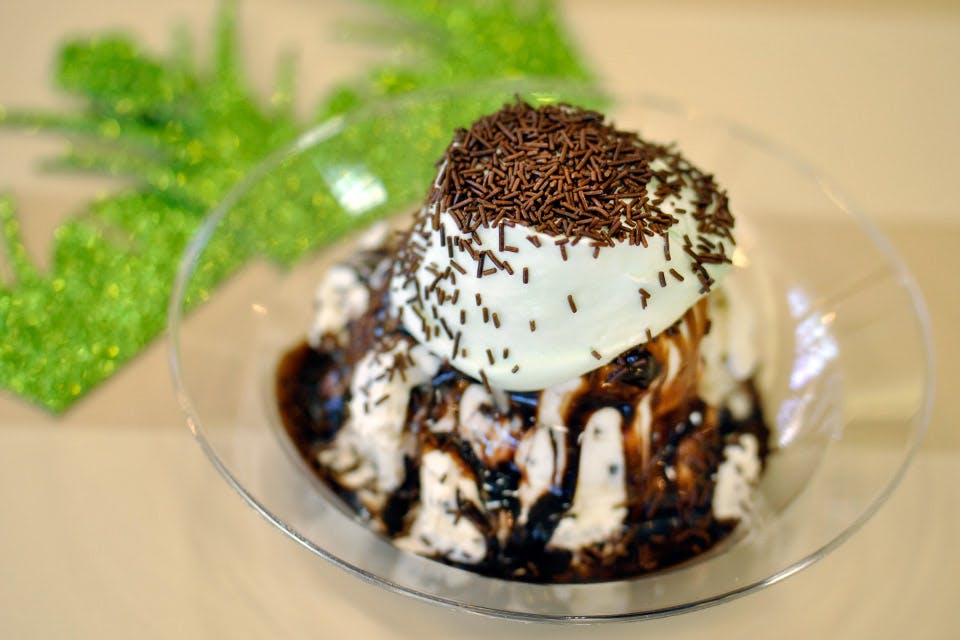 You don’t need to hop the next Aer Lingus flight to enjoy a taste of the Emerald Isle. Dublin, Ohio, has adopted all things Ireland — from the clovers on the town’s welcome sign to its annual three-day Irish festival, which is billed as the largest in the world. Select businesses even bear the “Irish Approved” seal for authentic as well as Irish-inspired products and meals. And while the city does make quite a party of St. Patrick’s Day, you can enjoy these festive dishes year-round..

Shamrock Sundae
Graeter’s Ice Cream
Although the Shamrock Sundae appears in all of Graeter’s more than 50 stores seasonally, its only year-round home is at the Cincinnati-based ice cream chain’s Dublin spot. Other locations make the dessert using the company’s mint cookies and cream flavor, but the Dublin shop starts with a base of mint chocolate chip. “We put green mint whipped cream on top of it,” says store manager Melanie Topazio, adding that the dish is rounded out with hot fudge and chocolate sprinkles. “It’s just something fun. It makes our store a little bit unique.” 6255 Frantz Rd., Dublin 43017, 614/799-2663, graeters.com

Irish Sliders
Dublin Village Tavern
Dreamt up by longtime general manager Geri Ziemba for a citywide slider challenge in 2014, the Dublin Village Tavern’s Irish Sliders bring some of Ireland’s distinctive flavors to an American favorite. Made with Irish banger sausage mixed with fresh ground beef, the Dublin Village Tavern tops each patty with imported Irish cheddar and bacon. “We came up with an Irish-type country relish that has apples and raisins and a tangy, mustardy barbecue sauce,” explains Ziemba. 27 S. High St., Dublin 43017, 614/766-6250, thedublinvillagetavern.com

Irish Egg Rolls
Brazenhead
Six years ago, Brazenhead — an establishment modeled after its namesake tavern in Dublin, Ireland — introduced an inventive spin on this Chinese-takeout staple, and it’s been a favorite ever since. “There’s plenty of pork egg rolls out there,” says head chef Pete Meyst. “Why not do a beef one?” The filling starts with a base of house-made corned beef. The kitchen then adds jalapenos, carrots, cabbage and chili flakes and accents it all with rice wine vinegar. The egg rolls are then served with a beer-based dipping sauce made with Ireland’s most famous brew. “We do a reduction of Guinness and mustard and honey,” says Meyst. “It all comes together with that.” hdrestaurants.com/brazenhead *Note: As of January 2020, Brazenhead in Dublin closed. Brazenhead in Grandview is still open.