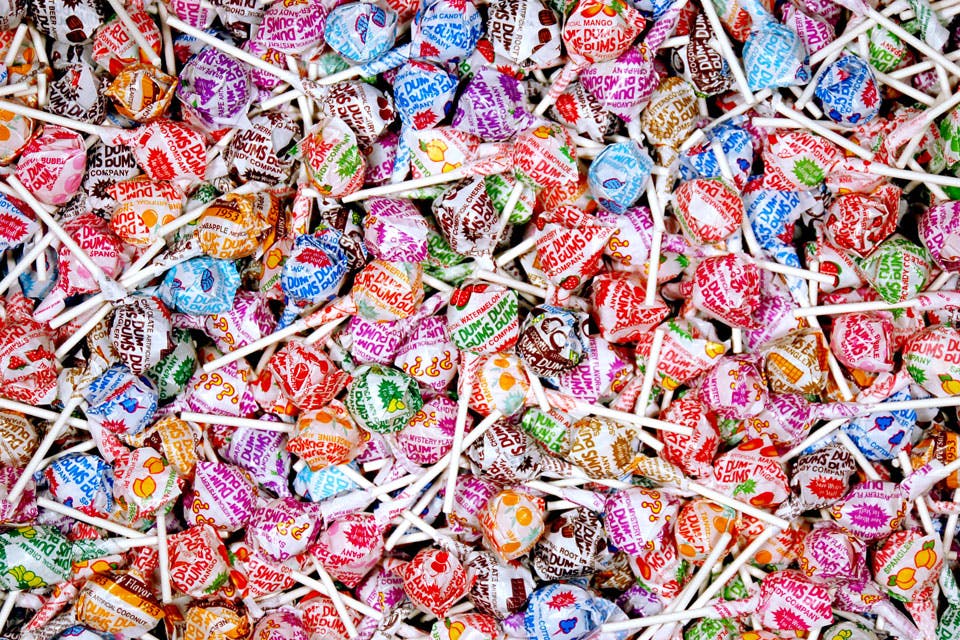 Where Dum Dums Are Born

We took a trip to Bryan, Ohio, to see firsthand how one of our state’s most famous candies is made.

A welcoming scent of sugar hits the senses first. Then, somewhere beyond the roar of machines that cook, knead, roll and cut bushel-sized blobs into 13,000 nearly identical marble-sized orbs you hear it: a random pattering, almost like raindrops.

The sound is a stream of tiny lollipops tumbling down a metal chute and onto a conveyor that ferries them on to another machine that cuts and twirls wrappers around each faster than the eye can register. A large coil of wax paper waits nearby. The repeating red pattern printed on it seems indecipherable at first, but a closer inspection brings a wave of recognition and five familiar words written over and over and over: Cherry. Dum Dums. Original Pops.

“Each wrapper runs about 235 pops a minute,” explains Steve Kerr, vice president of operations at Spangler Candy Co. He started working for the Bryan-based candy maker 25 years ago — the Monday after he graduated from college — and he never left. “I thought, Oh, I’ll come work here for a couple years until I find what I want to do. I’m still here.”

Spangler makes sweets other than Dum Dums, of course. For one, it’s the last major candy cane maker in the United States. The Bryan plant manufactures flavored varieties for other candy brands such as Jelly Belly, while a second Spangler factory in Mexico makes the traditional versions seen at Christmas. The Bryan facility also churns out loop-handled Saf-T-Pops and that strange, banana-flavored marshmallow treat known as Circus Peanuts.

But make no mistake about it, Dum Dums rule here.

More than 10 million are produced each day in 16 flavors, plus the elusive Mystery Flavor (a hybrid taste that isn’t as much mysterious as it is good business sense, but let’s not spoil that one yet). This year marks six decades since the 107-year-old Spangler Candy Co. first purchased its iconic lollipop from the Akron Candy Co. in Bellevue, which had been making the treats since 1924.

Even though Dum Dums have been part of pop culture for generations now, there’s still a lot most people don’t know about the treat. The average consumer doesn’t realize that the way the wax paper is folded over the candy is referred to as a sachet wrap or that there have been 37 flavors since 1953.

What about that Mystery Flavor? Kerr points to a screen on a piece of equipment that rolls the mix of corn syrup, sugar and flavoring into a thick rope of candy that’s cut and pressed into thousands of individual lollipop heads.

A box on the screen glows green showing cherry is currently being produced. Root beer is up next. The mystery flavor comes at the point where the end of one batch meets the start of a different one. Kerr says lollipops that are some mix of the two flavors go in the Mystery Flavor wrapper.

The system serves two purposes: First it allows the candy lines to run continuously, but it also adds an air of marketing mystique — one Kerr obligatorily plays along with after explaining the process.

“But we’re not allowed to tell you about the mystery,” he says with a smile. “It’s a mystery.”

Before there was the Dum Dum, there was the Bullet Pop, and the Akron Candy Co. in Bellevue wanted its own version of it. But it couldn’t just copy the popular treat’s cylindrical form and rounded top. So it came up with a banded-ball shape that bore a resemblance to the dum-dum bullet developed by British soldiers during the 19th century and named after the city in India where it was created.

“It was used extensively in WWI, so people coming back from the war knew what a dum-dum was and there was some recognition,” explains Spangler Candy Co. president and CEO Kirk Vashaw, adding that the lollipop’s creators were hoping to create an association with the already popular Bullet Pop brand in people’s minds. “They were trying to copy the Bullet Pop, so they said: Let’s call it what it looks like.”

For generations now, the phrase Dum Dums has conjured one image in the minds of Americans: a tiny ball of sugary goodness on a stick hidden beneath an easy-to-remove wax paper cover. Frequently given as a token of kindness at banks and service stations before the age of ATMs and pump-your-own gas, Dum Dums are a reminder of a simpler time, kind of like the family-owned Spangler Candy Co. itself. 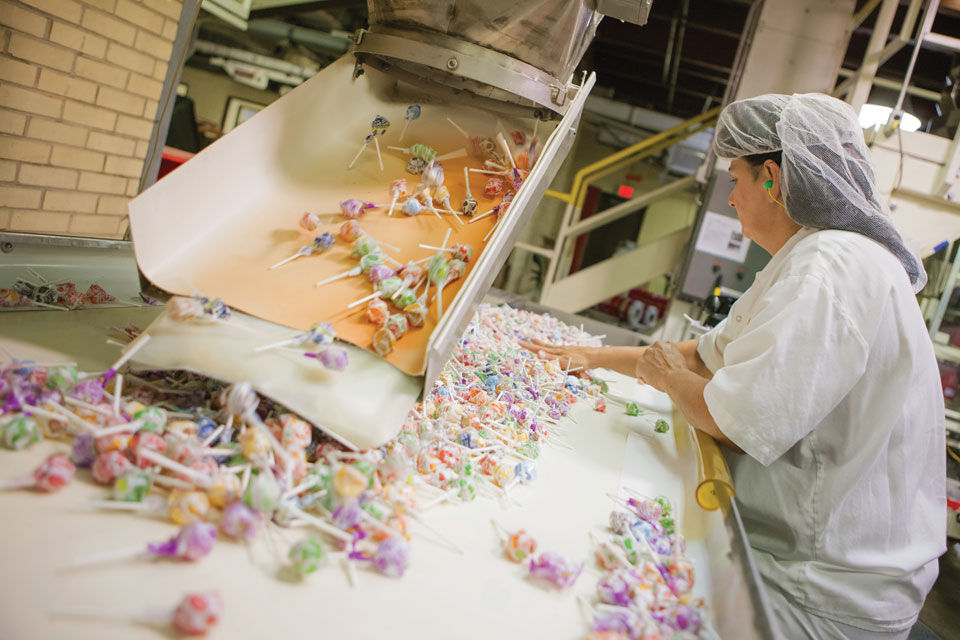 There have been 37 flavors of Dum Dums since Spangler Candy Co. started making the lollipops in 1953. The company makes 16 different flavors plus its Mystery Flavor at any given time. (photo by TRG Reality)

Vashaw’s great-grandfather Omar Spangler was one of the three brothers who founded the company in 1906. The siblings reinvested the money they made back into the business and grew the operation during the 1930s. The candy company weathered the Great Depression, showing a profit every year except one.


That original trio of Spangler brothers had a total of six sons among them. The second generation guided Spangler from the 1950s through most of the 1970s — buying Dum Dums in 1953 and purchasing Detroit’s A–Z Christmas Candy Canes in 1954.

The way he sees it, there are very few new ideas in the candy game. People have their favorite brands, but Vashaw points out that he sees potential in delivering the familiar in new ways. Playing on the fact that strawberry is the top flavor in the world, Spangler created strawberry-flavored Circus Peanuts, and its Dum Dums Gummy Snacks will likely be on Ohio store shelves in 2014.

“We try innovating around the edges, but to do something radically new, it’s difficult,” he says. “There really hasn’t been any true innovations in candy since the gummy bear and that was over 30 years ago. People are very set on their candies, so we just try to give people what they want.”

The trolley is a throwback, adorable even. The light wood and chirping horn give it a feel that’s more Mister Rogers than Willy Wonka, but it’s the perfect mode of transportation for a behind-the-scenes look at a piece of Americana.

Spangler Candy Co. got the trolley so it could offer factory tours as a way to celebrate the company’s 100th birthday in 2006. The tours were so popular, Spangler has offered them ever since. A second trolley joined the fleet in 2010. And, on a warm summer afternoon in August, the Spangler Candy Store and Museum connected to the factory is filled with families and retirees ready to board.

The store and museum opened about six months before the trolley tours began as a way to share the company’s long history. It also offers visitors the opportunity to purchase single-flavor bins of Dum Dums, buy a T-shirt or even provide feedback on an experimental flavor that’s available to sample. 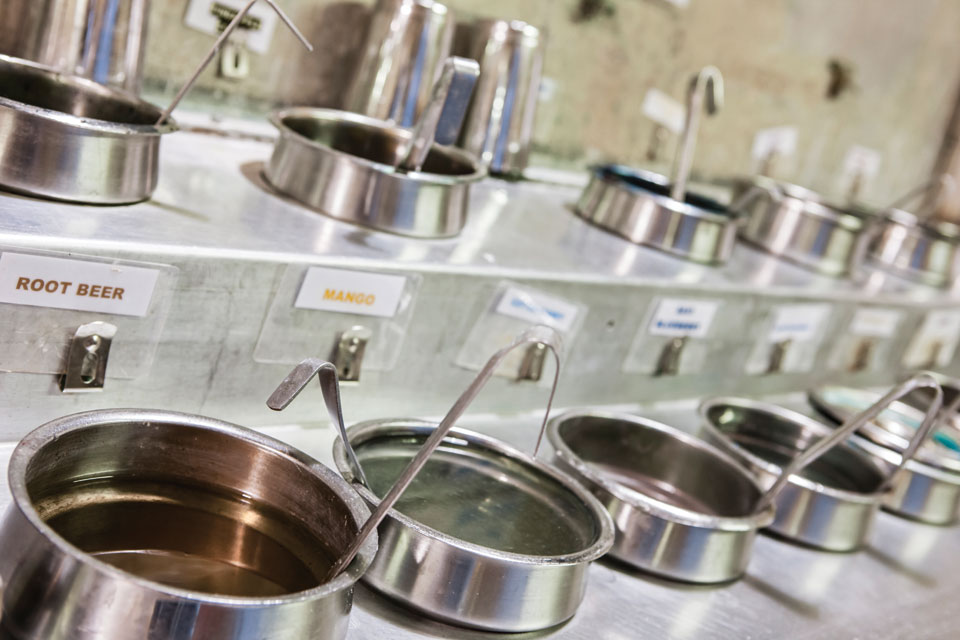 Flavorings give each batch its unique taste. Later in the process, the candy is rolled before it's cut, put on a stick, cooled, wrapped and sent downstairs. (photo by TRG Reality)

“In the past, we’ve had bacon and cappuccino,” says Mattea St. John, e-commerce & social media manager at Spangler Candy Co. “People can give us their rating, tell us what they think about it, and maybe it will be in the bag someday.”

The tour is the big draw though, with 10,000 people taking it last year. Visitors travel throughout the factory’s first floor, where Dum Dums ride down chutes like the top-line payout from a slot machine in Candy Land. (Dums Dums are cooked, cooled and wrapped upstairs.)

Then, it’s on through the vast warehouses where boxes upon boxes of Dum Dums, Saf-T-Pops, candy canes and other treats wait to be shipped.

In between each area, small video screens inside the trolley come alive to tell the story of Spangler Candy Co., show the production areas visitors can’t see firsthand, and cover the history of Dum Dums.

“Everyone is amazed by the amount of candy that we make,” St. John says. “You feel like you’re in the middle of all of it while you go on the tour, and people really enjoy that.”

And despite what seems like a wide array of candy brands on store shelves, creating a candy that lodges itself in American popular culture for generations relies on emotion as well as a solid business strategy.

Even though candy is mostly about sugar, your favorite treats are also about how they make you feel. Dum Dums beautifully illustrate this truth.

Just pull the edge of the wrapper, and the candy underneath reveals itself with a flourish worthy of a magician. There’s no struggle, no stress. You’ve done it hundreds, perhaps thousands of times since childhood. The feeling is always the same. That moment never gets old.

The Spangler Candy Store-Museum and Tours are closed until further notice, although curbside pickup of candy is available for catalog orders. For more information, visit spanglercandy.com.