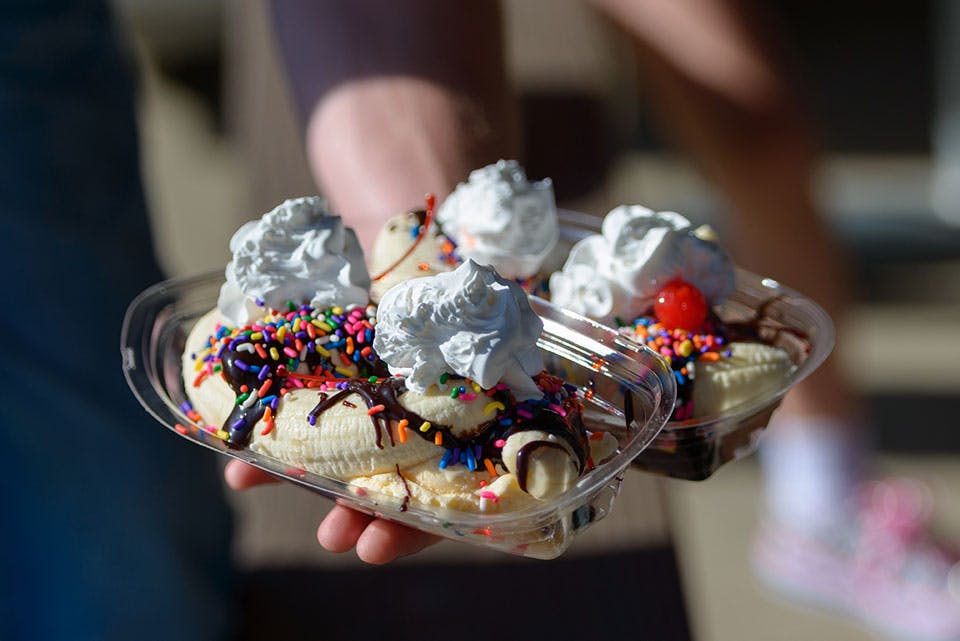 Birthplace of the Banana Split

Wilmington began serving the iconic sundae more than a century ago, but the town’s claim to fame doesn’t come without a share of good-natured controversy.

On a cold winter day in 1907, Wilmington restaurant owner Ernest Hazard held a contest among his employees to see who could come up with the most interesting food creation. The hope was to attract students from nearby Wilmington College to his business during the slow winter months.

Hazard himself created the winning idea by putting three scoops of vanilla ice cream between a banana sliced lengthwise and finishing it with chocolate, strawberry and pineapple toppings. His cousin Clifton Hazard christened it the banana split.

Wilmington celebrates this tasty bit of history with its annual Banana Split Festival each June, which brings together music, games, crafts and, of course, countless scoops of ice cream.

“We lay claim to it in 1907,” says Duane Weyand, Wilmington’s police chief and festival vice chair, “[but] there is another community that had a banana split a few years before.”

That community is Latrobe, Pennsylvania, and the Keystone State holds fast to its claim that David Evans Strickler, a pharmacy apprentice at Tassel Pharmacy in Latrobe, crafted the first banana split sundae in 1904.

Over the years a friendly rivalry has emerged between the towns, and Weyand says the mayors even exchange good-natured correspondence on the subject. “It makes for a good food debate,” he adds.

Visiting Wilmington’s Banana Split Festival each June, one would have no idea there’s any question about where the signature sundae was first created. Some of the most popular attractions each year are the banana split booth, where festivalgoers can build a custom creation, and the annual banana split eating contest, where all ages are invited to see who can be the quickest to polish off the treat.

“We probably run [through] several thousand banana splits in the two days we run the festival,” Weyand says.

But he makes it clear the festival is not just food. There’s also a car show, baseball tournament and craft vendors rounding out the activities. “The banana split is kind of like the cherry on top,” Weyand says.