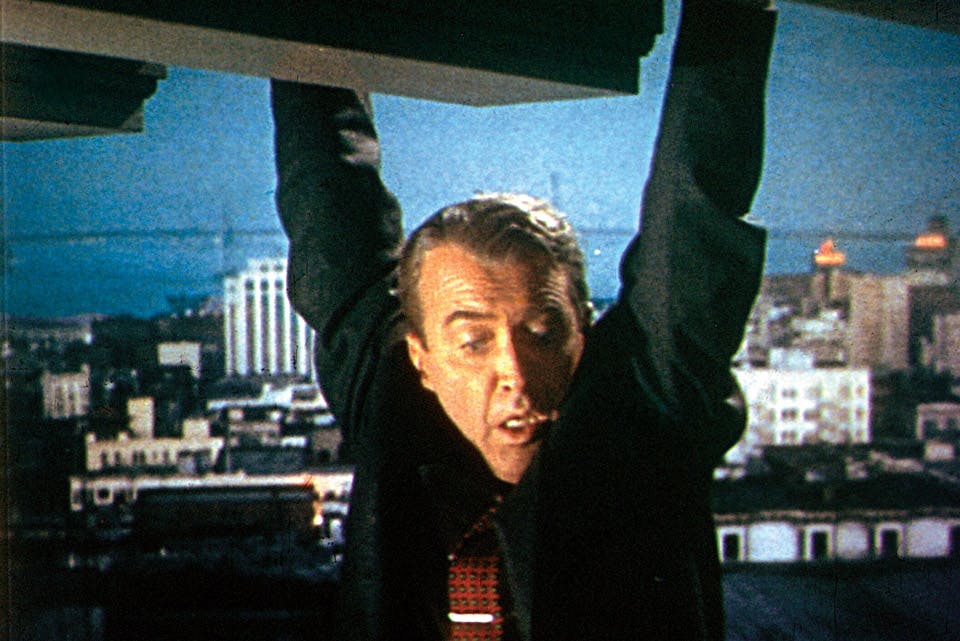 “The mark of a great genius is having your own voice,” says Mitchell, the 35-year-old assistant conductor for the Cleveland Orchestra. “Herrmann was one of those composers. He was allowed to be himself … and let the movie inspire him in whatever way it spoke to him.”

On Feb. 13, Mitchell will conduct the orchestra in a performance of Herrmann’s seductive score for “Vertigo,” the 1958 Alfred Hitchcock thriller starring James Stewart and Kim Novak. As the musicians play, the motion picture will be shown on a screen above them. The Friday evening performance is part of the Celebrity Series, which was launched in 2009 to pair classic films with Cleveland Orchestra performances.

“When you look at the renowned films of the ’50s, ’60s and ’70s, one name keeps cropping up over and over again: Bernard Herrmann. His music is some of the most fantastic written in the 20th century.”

Born in New York City in 1911, Herrmann studied conducting and composition at New York University and the Juilliard School. In 1934, he was appointed conductor of the CBS Symphony Orchestra and began writing music for radio plays.

Among them was Orson Welles’ famous 1938 drama, “War of the Worlds.” Broadcast on Halloween night and adapted from H.G. Wells’ science-fiction novel, the show was so realistic that it elicited panic among listeners who became convinced America was being attacked by invaders from Mars.

Herrmann’s brilliance can also be heard in more than 50 films, from the ominous woodwind leitmotif opening he created for Welles’ 1941 epic “Citizen Kane” to the mournful saxophone solos prevalent in “Taxi Driver.” Herrmann finished recording the score for the Martin Scorsese drama the day before his death on Dec. 24, 1975.

But it’s director Alfred Hitchcock with whom the composer is indelibly linked. Herrmann scored eight movies for him, beginning with “The Trouble with Harry” in 1955 and concluding with “Marnie” nine years later.

“[From the moment they began working together,] Herrmann and Hitchcock hit it off immediately,” says documentarian Steven C. Smith, author of A Heart at Fire’s Center: The Life and Music of Bernard Herrmann. “The men had a very similar artistic sensibility in that they shared a love of stories about obsessive behavior in characters. As a result, Herrmann did something few composers had done previously for Hitchcock films: Instead of only playing to the obvious action on screen, he told you what the characters were thinking, and brought out the subtext of the movie by heightening the psychological underpinnings of the story. ‘Vertigo’ is one of the best examples of how he achieved that.”

Set among such California landmarks as the Golden Gate Bridge and Mission San Juan Bautista, the story — which is based on the French novel, D’Entre les Morts (“from among the dead”) — centers on Scottie Ferguson, an acrophobic detective (played by James Stewart) hired by a college chum to shadow his suicidal wife, Madeleine (Kim Novak). Ferguson’s interest in the cool blonde becomes obsessive. So much so that after her death, he searches for an identical woman to take her place in his affections. As a result, deception is brought to light with tragic consequences.

“When Hitchcock decided to make his film ‘Psycho’ in black and white, Herrmann complemented that decision in his own way by writing the score only for strings — right down to the screeching violins that make the shower scene unforgettable. That was his way of composing in black and white,” Mitchell explains. “But ‘Vertigo’ is a very different film. For it, Herrmann employed the use of a full orchestra filled with woodwinds, brass, percussion, celesta, harp and organ, and used it all to great effect.

“If ‘Psycho’ is a black-and-white score,” Mitchell adds, “ ‘Vertigo’ is absolutely full-on Technicolor.”

Herrmann creates a hypnotically repetitive swirling of harps and strings to signify the fear of heights plaguing the film’s protagonist. He incorporates hints of Richard Wagner’s love theme from “Tristan und Isolde” to denote Scottie and Madeleine’s relationship, pays homage to Latin rhythms when the character of Carlotta fills the screen and uses phrases of Mozart and Bach to represent sanity and reason in a world that’s quickly spinning out of control for the besotted private eye.

“[In many scenes throughout the film,] Hitchcock eliminated dialogue and sound effects in order to give Herrmann’s score the entire soundtrack. That’s something that rarely happens in film today,” says Smith. “It shows the tremendous confidence that Hitchcock had in what Herrmann was going to produce. In fact, the composer was fond of telling people that Hitchcock told him at the time, ‘We’ll just have the camera and you.’ ”

Just as Herrmann’s timing was essential, so too must be Mitchell’s. During the Cleveland Orchestra’s Feb. 13 performance, the conductor will align the 74-minute, 24-movement “Vertigo” score to the action on screen in such a way that the orchestra doesn’t miss a beat. He admits it can be a tad tricky.

“Some of our musicians may know a couple of the cuts from the film, but the fact is the music is not something that is played regularly in a concert hall,” Mitchell says. “So, the biggest challenge is making sure they are comfortable with and understand how the score gives and takes, pushes forward and pulls back.”

As he conducts, Mitchell will keep one eye on a monitor in front of him that’s displaying the movie. A clock in the corner of the screen will serve to mark his place in the score.

“I learned very early on that it is much easier to get an orchestra to slow down than it is to get an orchestra to speed up,” Mitchell says with a smile. “It’s kind of like driving an 18-wheeler. It takes a ton of energy to accelerate, but easing off the gas is a different story. So, when I’m trying to line up the orchestra with the film, it’s [better to] err on the side of being a touch ahead than a touch behind. It’s much more comfortable to let the orchestra relax a bit than to try to play catch-up.

“But, of course,” Mitchell adds, “it will be just fine. They are the Cleveland Orchestra.”

As the conductor readies for the 2 1/2-hour rehearsal that will take place on the afternoon of the concert, he speculates on what the post-performance reaction might be.

“When we played the music from ‘Psycho’ last year, it was a huge success,” Mitchell says. “Afterward, audience members came up to me absolutely flabbergasted at how wonderful the score was. For many, it was the first time they had really paid attention to it. My hope for ‘Vertigo’ is that it will cause people to say, ‘Wow, what a fantastic film; wow, what a fantastic score; and wow, what a fantastic orchestra. When do I get to hear them next?’ ”