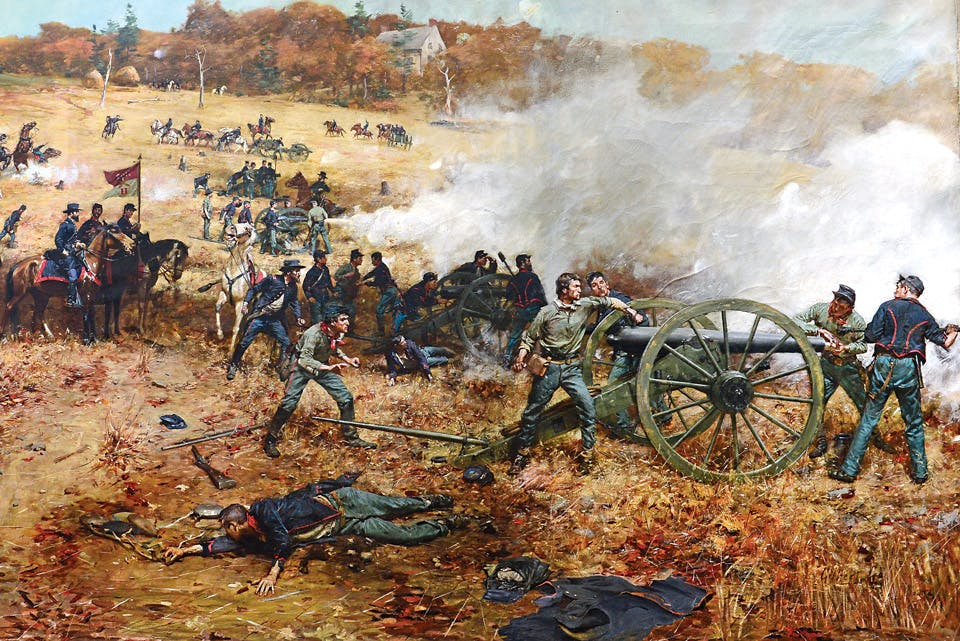 The Toledo Museum of Art offers a look at the Civil War from eyewitness observers and artists of the era.

Gilbert Gaul’s oil painting “Battle H 1st Ohio Volunteers Light Artillery in Action at Cold Harbor” portrays the heroics of a Union artillery battery comprising soldiers from throughout the state. Their victory seems assured, and the pastel palette the artist used adds a quiet touch to the landscape. The massive 5-by-8-foot work, which was created in 1893 as a commission for a group of Civil War veterans, is still ensconced in its original ornate Victorian frame. The painting offers an immersive and romanticized depiction of the battlefield.

“Gaul took the impressionistic and realistic styles of painting he was familiar with and melded them into what would be considered a cinematic tour de force by today’s standards,” says Edward Hill, curator of “The American Civil War: Through Artists’ Eyes,” which is on display at the Toledo Museum of Art from April 3 through July 5. “You can easily equate the depiction of gallant figures on horseback and soldiers firing cannons to scenes from popular movies. The painting’s size is also part of its impact. When you walk up to it, the image fills your view to the point where it’s no stretch to believe that you are there.”

Gaul’s painting is the focal point of the Toledo Museum of Art exhibition. It coincides with the 150th anniversary of the end of the Civil War which occurred on April 9, 1865, when Gen. Robert E. Lee surrendered to Lt. Gen. Ulysses S. Grant at Appomattox Court House, Virginia.

Although Gaul’s painting glorifies the actions of those who fought, the exhibition also features images from artists who were embedded with troops during the Civil War and were able to record history as it happened. Even without the technology of today’s war correspondents, Hill reflects that the works they created a century and a half ago have transcended time.

“Back then, you had artists who would do sketches from the battlefield, then send them by horse, train or boat to New York, where they would be published a few days later in Harper’s Weekly, Frank Leslie’s Illustrated Newspaper and other prominent periodicals of the day,” he says. “As a result, the Civil War was really the first war that we have a complete record of.”

One image included in the exhibition offers a gruesome contrast to the pageantry of Gaul’s painting. Alexander Gardner’s silver print, “A Burial Party, Cold Harbor, Virginia,” offers a horrific look at the same battle’s aftermath. The photographer took a picture of the young black men charged with burying the remains of fallen soldiers 10 months after the fighting ended. 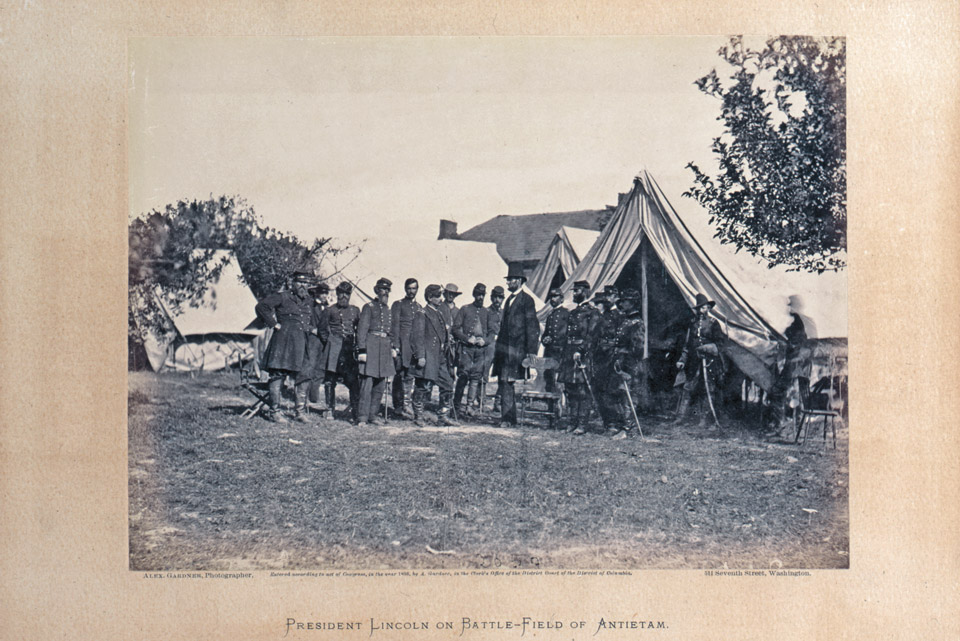 Following combat, local residents usually came forward to give a proper burial to the enemy troops killed near their homes, but the scale of the casualties at Cold Harbor — 60,000 Union soldiers were either killed or wounded — during the battle made it impossible to do so.

“The reality of Cold Harbor is so different from the scene Gaul painted 30 years later, when wistful reminiscences about the war were common among veterans,” Hill explains. “Gardner’s photos really shocked a lot of people in the North when they were published. Since the fighting took place in the South, northerners were removed from these grim scenes.

“In some sense, it’s that way today: Our country fights wars elsewhere in the world, and most of us are detached from the devastation.”

Gardner had also been on hand to snap a photo of “President Lincoln on Battle-Field of Antietam, October, 1862.” The picture was taken during the commander-in-chief’s meeting with Gen. George McClellan two weeks after the Union victory in western Maryland.

“So many photographs of Lincoln show him seated, so you rarely get a sense of his height,” Hill says. “This famous photo clearly proves he was a giant of a man.”

Lincoln’s strength is also celebrated in Leonard Wells Volk’s bronze cast of his right hand. It was molded in clay in Springfield, Illinois, on May 19, 1860, the day after Lincoln became the Republican nominee for president. Earlier that year, Volk had created a cast of the statesman’s face, which he planned to use as a model for a statue. For the next step, Volk wanted to create models of Lincoln’s hands.

“Lincoln had the reputation of being very cooperative with artists and sculptors,” says historian Harold Holzer, author of The Civil War in 50 Objects and Mine Eyes Have Seen the Glory: The Civil War in Art. “He was always making fun of his own appearance and always professed great modesty about the way he looked.”

When Volk arrived in Springfield, he discovered Lincoln had been shaking hands all night with well-wishers, and, as a result, his right hand was completely swollen. Because this was the sculptor’s one and only chance to spend time with Lincoln, he asked him to hold something in his right hand to minimize the distortion.

“The next thing Volk knew, he heard sawing coming from the woodshed — and there was Lincoln cutting off part of a broom handle to use as a grip,” says Holzer. “The statesman then whittled it down because, he said, he ‘wanted it to look nice.’ I think that’s a lovely story about Lincoln’s cooperation with artists.”

In 1864, Sherman commanded the Union armies in a drive from Chattanooga, Tennessee, to Atlanta and the famous “march to the sea” across Georgia. In these campaigns, and during their push northward from Savannah, Georgia, through the Carolinas, Sherman’s soldiers blazed a wide path of destruction that would ultimately serve as the final blow to the Confederacy. “Victory” depicts an ethereal winged figure the sculptor fashioned to represent the guiding force that directed Sherman to triumph.

“Being an artist of his period, Saint-Gaudens looked to ancient Greece and Roman sculpture for inspiration,” says Hill. “As they did centuries ago, the laurel wreath the figure wears as a crown and the palm frond in her hand symbolizes victory, as she leads Sherman off into history.”

A portrait of Rutherford B. Hayes, the 19th president of the United States, is also part of the Toledo exhibit. During the Civil War, the Delaware, Ohio, native served as a major in the 23rd Ohio Volunteer Infantry.

Wounded in action four times, he rose to the rank of brevet major general. While Hayes was still in the Army, Cincinnati Republicans nominated him for the House of Representatives. He accepted, but would not campaign, explaining that “an officer fit for duty who at this crisis would abandon his post to an electioneer … ought to be scalped.”

On loan from the Hayes Presidential Center in Fremont, William Garl Browne’s oil painting of the president was completed shortly after he took office. Hayes is posed in his military uniform against a backdrop of the red, white and blue regimental flag of the 23rd Ohio Volunteer Infantry. Next to the portrait, a note written by Browne, dated Sept. 29, 1877, confirms the $200 he charged for his work had been paid in full.

“These artists gave us great richness,” Holzer says. “They have left behind an account filled with real color and texture of what was going on in our country.”