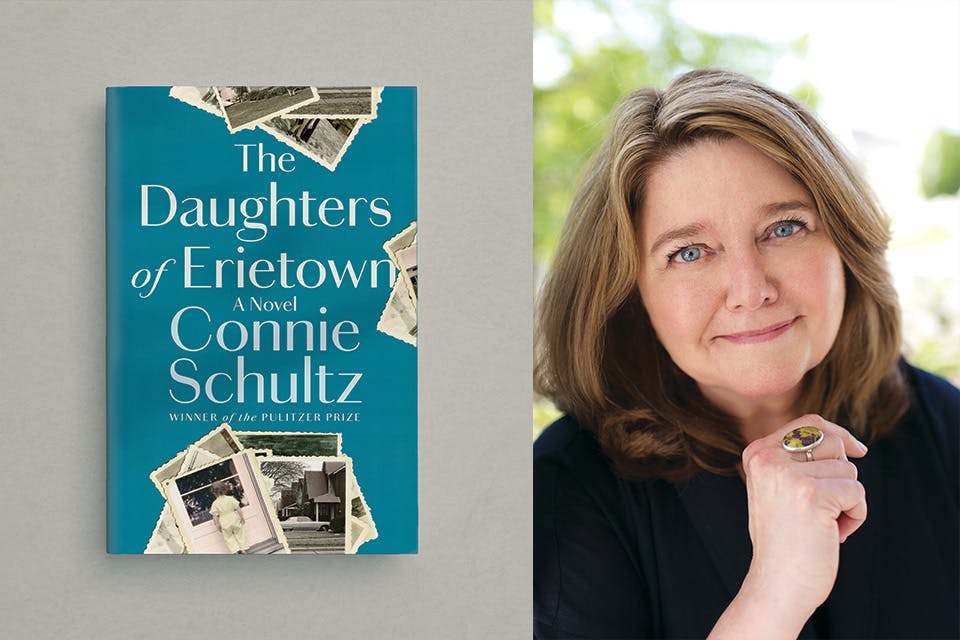 Connie Schultz on ‘The Daughters of Erietown’

The author and Pulitzer Prize-winning columnist’s debut novel delves into the dreams and realities of working-class families.

The future couldn’t look brighter for Ellie Fetters and Brick McGinty in 1957. Teenagers in love, they’re eagerly anticipating senior prom and their upcoming high school graduation. But their lives quickly unravel when Ellie becomes pregnant, and the couple is forced to carve out a reality that’s far from what they hoped it would be.

It took author and columnist Connie Schultz almost a decade to write her first novel, The Daughters of Erietown. Set against a backdrop of racism and the burgeoning women’s movement, the riveting tale, which spans 50 years and takes place in Ohio, chronicles the struggles working-class families face.

“A novel was not something I always wanted to write,” Schultz says. “Many writers get into the journalism profession because they would love to write fiction, but need to make a living. But I have always loved being a journalist. My editor kept wanting me to try this. Now that the book is finished, I can say that this pivot has become more meaningful to me than I ever knew it would be.”

We talked with Schultz — on the faculty of Kent State University’s School of Journalism and Mass Communication and married to U.S. Sen. Sherrod Brown — about her process, the difference between writing fact and fiction and the courage to follow your dreams.

You won the Pulitzer Prize for a series of columns you wrote for The Plain Dealer in Cleveland and authored two nonfiction books. Was it hard for you to make the transition to writing fiction?
I think one of my earliest struggles in writing the novel was that, as a journalist, I’m so used to interviewing more people if I don’t have the right quote. Well, you can’t do that when you’re writing a novel. You’ve got to let the characters evolve and they’ve got to sort it out, and you’ve got to help guide that process. The biggest obstacle for me was getting that voice out of my head that made me question whether I could do it. I really had to go back to my roots as a writer and remind myself that before I was being taken seriously as a journalist, I would, literally, as a young woman, look in the mirror and say, “You are a journalist. You are a writer.” I had to return to my old practice and say to myself, “You are a novelist.”

Do the plotlines mirror your own life in any way?
Certainly one of the themes does: Working-class people are just like more affluent people. We’re smart and we have our dreams and we have all these goals we set for ourselves. But when the big problems hit, and there’s no money to fix them … that’s when our lives often take a sharp turn. Being from a working-class family, my ability to go to college really changed my life as it did for [Ellie and Brick’s daughter] Sam. Like Sam, I was straddling two worlds, which is not an uncommon thing for working-class kids who get to go to college and be the first ones in their family to graduate. You feel that tension for the rest of your life.

Was the writing process you engaged in while penning The Daughters of Erietown different from the one you use when writing nonfiction?
Yes, because it requires longer periods of time in the chair — there’s just no substitute for it. And for me, that required a discipline. I am not a morning person, by the traditional definition. I don’t like to run out the door first thing, even though often I have to when I teach. But, as it turns out, I am a morning person as a writer. I do most of my strongest writing in the first four, five or six hours of the day. So, as I wrote the book, I would tend to get up pretty early — usually between 5:30 and 6 a.m. at the latest — have coffee and some toast and then go straight into the sunroom, which is where I did most of my writing. I would light a little tea candle and make myself sit in the chair and keep working. I would stand up periodically and throw a load of clothes in, but I would not stop writing until the candle extinguished. That’s what gave me three to four hours at a time in which to work.

The novel, which spans 1944 to 1994, is filled with many nostalgic references readers will relate to. Where did researching the decades take you?
I knew I wanted to include a train case from the 1950s, and I needed to know what it felt like, how heavy it was and what the inside looked and smelled like. I finally found a blue one on eBay, and that’s how it ended up becoming that color in the book. After my editor read the first draft, she said I needed to add more time references and I thought, “OK, I’m going to use ones that actually exist,” so I added JFK’s assassination, which was such a vivid memory for [my generation.] A friend who lives in Montana sent me a copy of Life magazine from 1962 that featured a section on Annie Glenn, the wife of astronaut John Glenn [the first American to orbit the Earth]. Sherrod and I got to know John and Annie, and one of the things I love about her is how courageous she is and had to be during that time. I thought, “This is perfect.” I can have Ellie actually reach for that magazine and talk about how Annie Glenn never got the attention she deserved because she was scared out of her mind while he was up there, and she had to hide it and be the confident astronaut’s wife. I also bought those booklets about “the year you were born,” for every year of the time span I was writing about. They jogged my memory about the decades I remembered and provide facts about those I didn’t know about. Music is such an important aspect of our memories, so I researched dates songs came out. I also looked through my mother’s cookbooks for recipe ideas.

The novel has so many heart-warming, as well as heart-breaking, moments. Was it difficult to deal with the grief and feelings of regret woven throughout the story?
It was difficult to write about grief. Sherrod tells a story about returning home three years ago and finding me really down, which was not my nature. He asked what the matter was, and I said [one of my characters] died today. And he said, “Honey, you’re writing it. You knew he was going to die.” And I said, “Yes, but I’ve known the character for seven years and I’m going to miss him.” I don’t want to get too weird about my characters. I know I made them up, but they do become real to a writer in the way they have to if you’re going to really give them full-fledged lives and make them different from one another. So I guess in that way, yes, I have my moments of sadness.

What was the most difficult scene you had to write?
I would say the scenes of violence, particularly between Brick and his father. I’ve written so many stories over the years of others who have been on the receiving end of just horrible violence — and yet I knew it had to be believable. Physical aggression is part of life, too, for any class of people, not just working-class people. The [relationship] Brick had with his father also explains that as bad as Brick could be sometimes, he is trying very hard never to be his father, and I wanted to show that.

There are many memorable observations in the book: “Fear has a way of blinding a person to his own potential” and “Even when you don’t notice it, life is rearranging you.” Is there one that has special meaning for you?
The only thing I’m mindful of that I brought from my own life is “Grief is that monster that bangs on your door until you let it in and sit with it for a while. When you get bored with each other, the monster leaves.” [I believe] you can’t get through the grieving process unless you let it in, and for me that became the monster at the door. The rest of the dialogue just kind of unfolds as you write. I don’t feel like I’ve got these words of wisdom, I feel like these characters end up having them. I wanted to do them justice. I wanted them to be incredibly flawed and yet incredibly, I hope, worth your time because we all know people like them.

In the final chapter, Ellie, who is now 60, begins thinking about the next phase of her life. Any chance for a sequel to the book?
I am playing with the idea. [Writing this book] is a milestone for me, and I don’t know how it’s going to be received. I do hope that one of the messages that comes through for women thinking of doing something new is: Try it. We aren’t as limited as even our mother’s generation felt by their age. The only regret you’re going to have is not trying something — not that you tried it.

For more information about The Daughters of Erietown, visit penguinrandomhouse.com