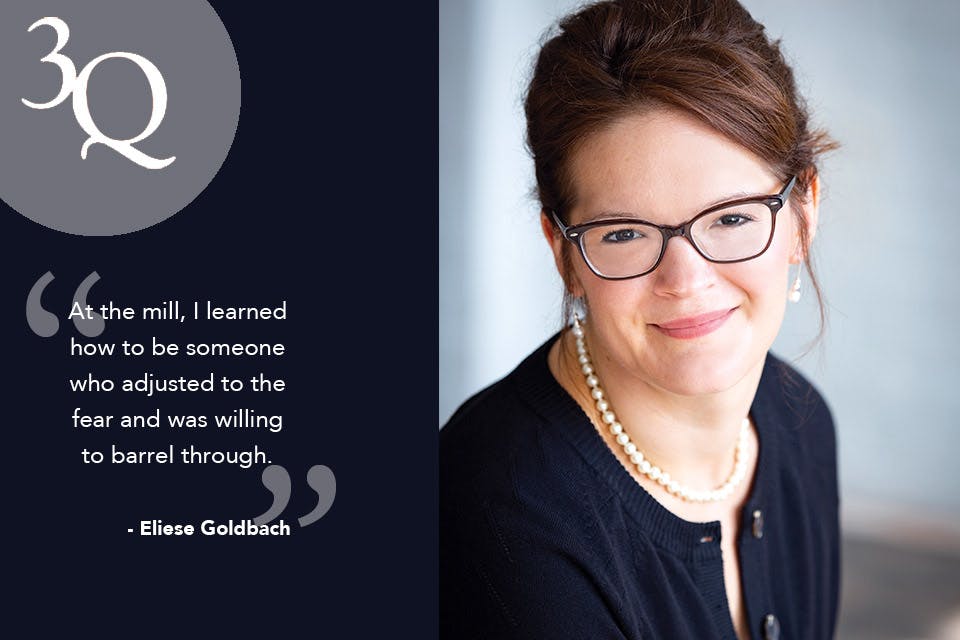 The author spent three years working at Cleveland’s ArcelorMittal plant, which she recounts in her debut book, ‘Rust: A Memoir of Steel and Grit.’

May 2020
BY Barry Goodrich | Photo by Cheryl DeBono/Michaelangelos Photography

May 2020
BY Barry Goodrich | Photo by Cheryl DeBono/Michaelangelos Photography

The Rust Belt has been analyzed by the media, targeted by politicians and written about by those who link the region to stereotypical economic and lifestyle behaviors. That became especially true following the 2016 election, which prompted writer Eliese Goldbach to spend three years working at Cleveland’s ArcelorMittal steel plant.

“Being at the mill, I was always conscious of the way people were looking at the Rust Belt, but it also made me recognize the importance of the industry in the city’s history,” says Goldbach, an adjunct English professor at John Carroll University whose new book, Rust: A Memoir of Steel and Grit, was released in March.

While much of the book touches on Goldbach’s experiences in the labor-intensive world of a steel mill, it also delves into her struggles with bipolar disorder, being a liberal in a conservative workplace and a traumatic sexual assault in college.

“I started to write this as a different view of the Rust Belt, but it necessitated that I go back into my own story,” says Goldbach, who lives in Willoughby. “There were parts I found difficult to write about, but you force yourself to sit in that chair and do it.”

Goldbach, who received the 2016 Walter Rumsey Marvin Grant from the Ohioana Library Association, talked with us about her time at the mill, her religious background and what she learned about herself writing the book.

You seemed to have had a love-hate relationship with the steel mill. What was it like to work there?
On one hand, it was a grueling job that I felt was sucking all my energy out of me. I was resentful of that. You faced dangers every day, but there was something that was very cool about stepping onto that property. It helped to bond the workers together. And running a 100-ton crane made me feel like a badass.

You were valedictorian at St. Augustine Academy in Lakewood and once aspired to be a nun. What changed your path?
I had religious, Republican roots, and Catholicism was very important in my family. In our religion, the saints are like celebrities. I gravitated toward writing after my dream of being a nun died. I supported myself by painting houses, which was quite the job. At the mill, I learned how to be someone who adjusted to the fear and was willing to barrel through.

Your book has received a great deal of critical praise. What did you learn about yourself during the writing process?
A real sense of confidence. I had tried to write a book for a very long time. I’m not good with any kind of praise and I wasn’t expecting it. Some of the steel workers have come to see me at book events … people who have worked in those kind of jobs have reacted positively.