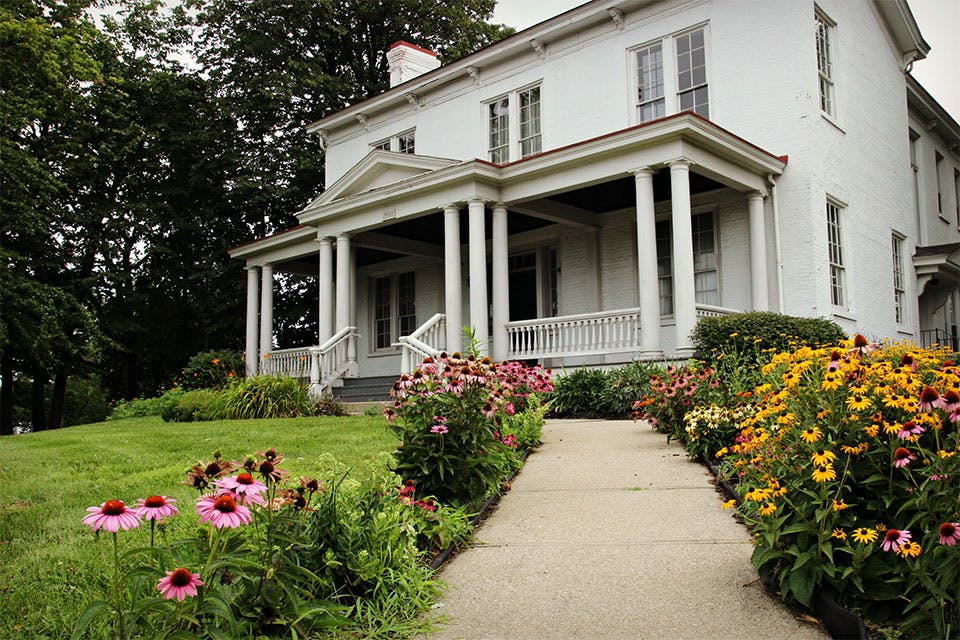 This book lover’s road trip includes the family home of the woman who helped change Americans’ views on slavery and a museum celebrating the art of the picture book.

Ohio’s literary figures range from the world’s first internationally acclaimed Black poet to an acclaimed New Yorker cartoonist to the woman who helped reshape Americans’ ideas about slavery. Sites associated with these writers as well as dozens of others across the Buckeye State are featured on the Ohio Literary Trail, a road trip that includes historic homes, exhibits and significant places. “Literary tourism is becoming a much popular thing in different regions of the state,” says David Weaver, executive director of the Ohioana Library Association, which launched the trail in 2020. There are currently 61 stops, and many are marked by an Ohio Historical Marker sign. Others offer a deeper experience for bookworms and history buffs alike, including these nine destinations.

Mazza Museum: The University of Findlay’s Mazza Museum is home to more than 300 original artworks from children’s picture books. Names like Steven Kellogg, Dr. Seuss, Ted Rand, and Eric Carle have works in the museum, showcasing childhood literary works that are remembered by many. No matter your age or what books you read growing up, you’ll find something here that delivers a wonderful shot of nostalgia. Benjamin Sapp, director of the Mazza Museum, says the institution prides itself on being the world’s first and largest collection of original artworks for picture books. In 2019, it had 291 different public programs tied to the collection. “With our unique artwork, we provide programs for truly people of all ages,” Sapp says. 201 College St., Findlay 45840, 419/434-4560, mazzamuseum.org

Clyde Museum: When author Sherwood Anderson’s Winesburg, Ohio was published in 1919, some in his hometown of Clyde, Ohio, noticed that many of the characters featured in his tales of people dealing with the darker sides of life seemed as if they were based on actual residents. (Anderson both gave credence to and denied that fact at different points throughout his career.) Either way, the Clyde Historical Museum celebrates Anderson with a display that includes first-edition copies of his books, his passport and artworks made by his brother, American artistKarl Anderson. “[Sherwood Anderson] is celebrated in town because he became known as a father of literary realism,” says Gene Smith, curator of the Clyde Historical Museum. Visit website for hours. 124 W. Buckeye St., Clyde 43410, 419/547-7946, clydemuseum.org 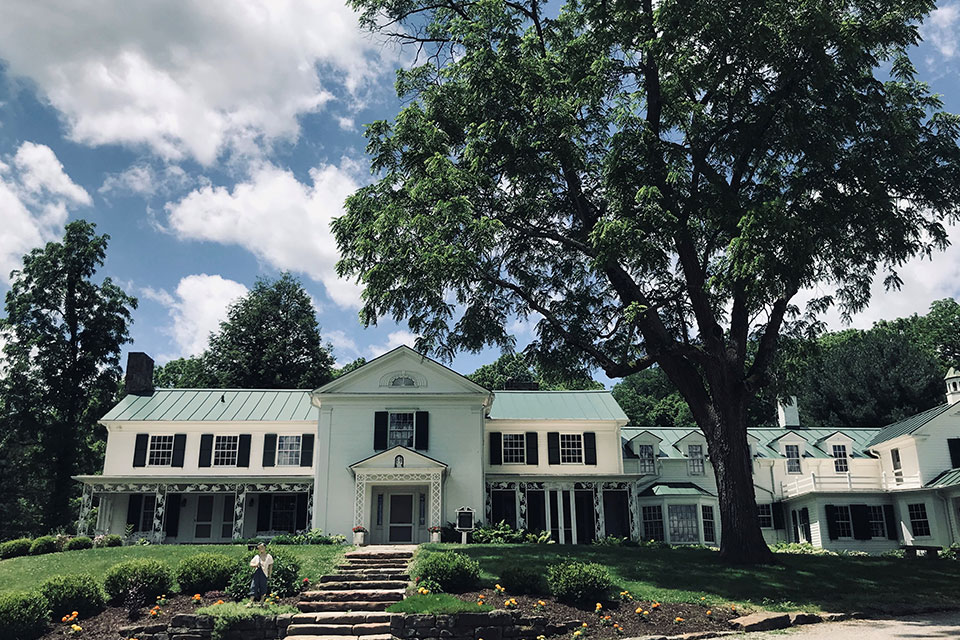 Malabar Farm: Louis Bromfield was a bestselling author and conservationist who spent time in New York, Hollywood and Paris after growing up in northeast Ohio. He won the Pulitzer Prize for his 1926 novel Early Autumn, and returned home in 1938 to purchase three separate rural properties and merge them as Malabar Farm. “His fiction writing came around and paid for this dream that he had weighing on his mind, which was owning a farm,” says Lori Morey, tour guide at Malabar Farm State Park. Today, the state of Ohio helps oversee the 916 acres that include a working farm, the original Bromfield house (also the site of Humphrey Bogart and Lauren Bacall’s 1945 wedding), walking trails and a visitor center. 4050 Bromfield Rd., Lucas 44843, 419/892-2784, malabarfarm.org

Cleveland Public Library: As the third-largest research library in the United States, the Cleveland Public Library’s Main Library in the heart of downtown is both a wealth of knowledge and an architectural gem. “Our collection is what really stands us apart from most people, besides the Library of Congress,” explains John Skrtic, director of public services for Cleveland Public Library. “We save, archive and preserve.” The elegant Main Library building was constructed in 1925 and covers five floors, while the Louis Stokes Wing next door built in 1997 spans 10 floors. The Eastman Reading Garden is nestled between the two and is home to beautiful plantings, park benches and periodic art installations. 325 Superior Ave., Cleveland 44114, 216/623-2800, cpl.org

The Billy Ireland Cartoon Museum: Located on The Ohio State University Campus, the Billy Ireland Cartoon Library & Museum holds the title of having the world’s largest collection of cartoon and comics materials. The museum has one permanent exhibition of cartoon art on display as well as two rotating exhibitions. The collection here includes John Kascht’s “Making Faces” portraits depicting celebrities such as Bill Murray and Whoopi Goldberg as well as works by Milton Caniff, Nick Anderson and Bud Blake.“I think that the literary world is now realizing that comics and graphic novels are literature,” says Jenny Robb, associate professor and curator of the museum. “While most of what we show is original art, we also feature exhibitions that have book materials.” Sullivan Hall, 1813 N. High St., Columbus 43210, 614/292-0538, cartoons.osu.edu

The National Road & Zane Grey Museum: Pottery, America’s first interstate highway and the works of novelist Zane Grey are highlighted at this southeast Ohio museum. Grey wrote fiction and some nonfiction works after leaving Ohio, but he’s most well-known for helping pioneer the Western adventure novel with his books such as The Lone Star Ranger and The Last Trail, which were known for their intricate level of detail. (His most famous and most printed book, Riders of the Purple Sage, was published in 1912.) “People were very poor at that time, and many couldn’t travel,” says Betsy Taylor, executive director of the Museum Association of East Muskingum. “Descriptions that we may find tedious today, were often sought after back then.” Current 2021 hours run June 16 through Oct. 31. 8850 East Pike, Norwich 43767, 740/826-3305, ohiohistory.org

Thurber House: James Thurber lived in this house while the Columbus native attended Ohio State from 1913 to 1918. Later, he went on to be a cartoonist for The New Yorker magazine and was also a celebrated humorist, author, playwright and journalist. “When you read his work, it’s super funny, but it’s also relevant today,” says Laurie Lathan, executive director of Thurber House. The home now serves as a literary center and museum dedicated to its namesake. It features works and memorabilia tied to Thurber, and photos of fellow writers who have stopped in over the years are displayed within the home. Traditionally, between 15 and 30 authors visit annually to take part in Thurber House’s lineup of programming. 77 Jefferson Ave., Columbus 43215, 614/464-1032, thurberhouse.org 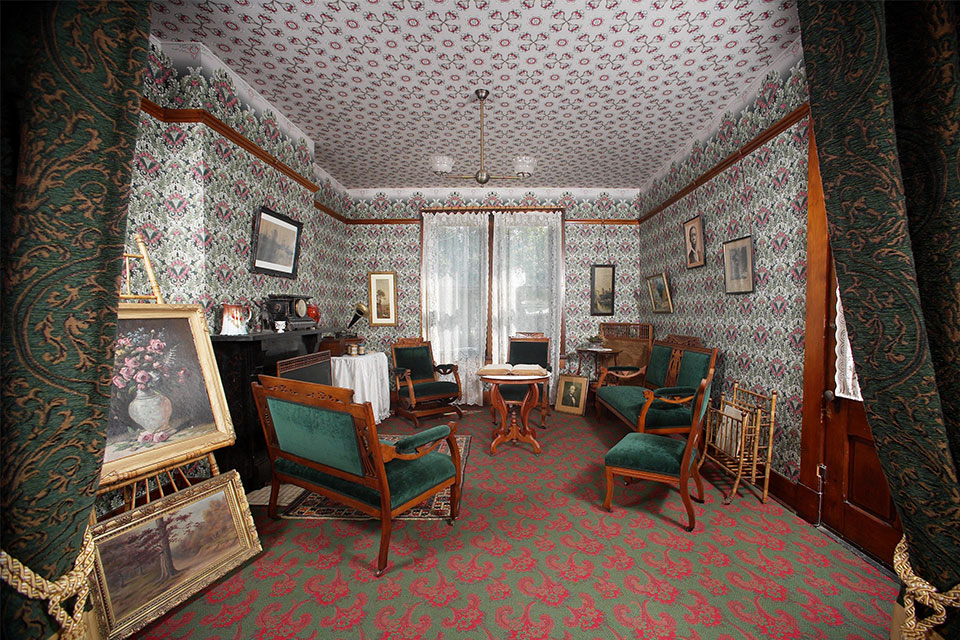 Paul Laurence Dunbar House Historic Site: Paul Laurence Dunbar purchased the Dayton home in 1904, after achieving acclaim as an internationally known author and poet. Following his untimely death in 1906, Dunbar’s mother Matilda maintained the home until the 1930s, leaving many of his items untouched. Some of the items on display are his first edition works of poems and books, as well as his Remington typewriter, clothing and his high school diploma. “So much of the Dunbar story is him working to overcome some major obstacles. He was the son of two formerly enslaved people and he graduated high school in [a] racist era and could not find a newspaper job. So, for a time, he published a newspaper specifically for the African American population,” says Alex Heckman, vice president of museum operations for Dayton History. Temporarily closed Nov. 1 through Jan. 29, 2022. 219 N. Paul Laurence Dunbar St., Dayton 45402, 800/860-0148, nps.gov/daav

Visit websites for all hours and restrictions before traveling. For more information about the Ohio Literary Trail, visit ohioana.org.