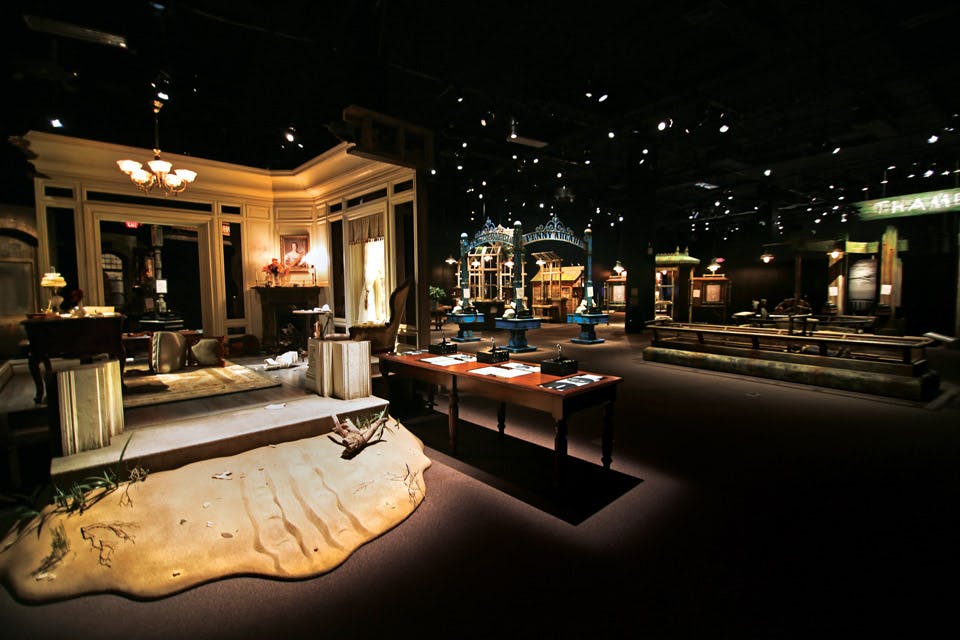 For more than a century, Sherlock Holmes stories have captivated readers. A COSI exhibit brings literature’s most famous detective to life.

An overturned chair, a bullet hole in the wall, shards of plaster from a broken sculpture on the floor, blood spatters everywhere. Separately, each clue poses a puzzle as to what happened in this drawing room. But taken together, the evidence seems unmistakable: Although there’s no sign of a body, a murder appears to have been committed. 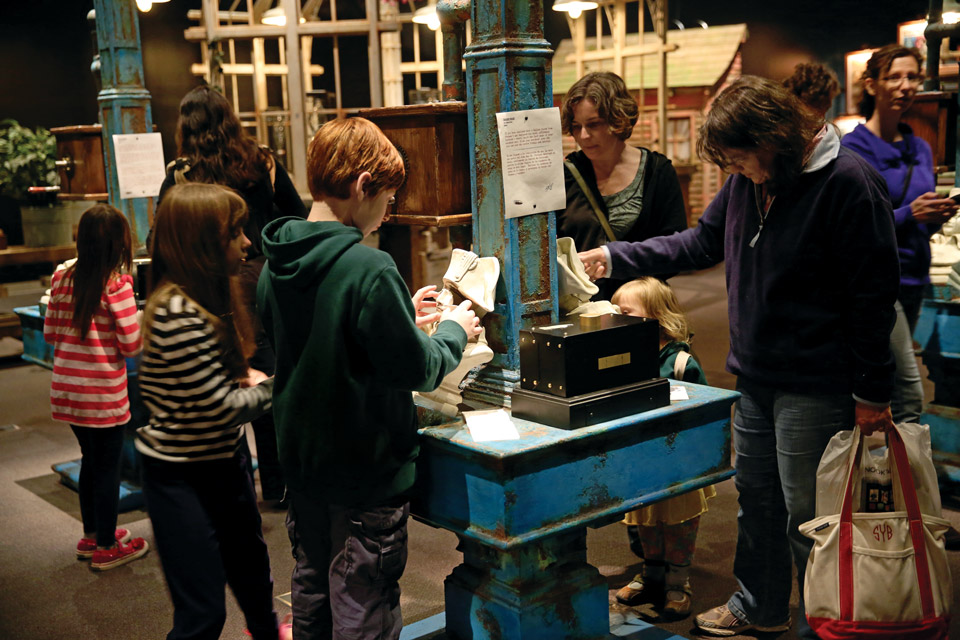 COSI visitors are able to investigate evidence from the exhibit’s crime scene. (photo courtesy of the Oregon Museum of Science and Industry)

It’s the sort of scene that would have police inspectors at Scotland Yard baffled, but not the world’s most famous fictional detective. As he would say, the solution is quite simple, “elementary” actually.

From Feb. 8 through Sept. 1, visitors to COSI will have the opportunity to crack the case as the Columbus museum hosts “The International Exhibition of Sherlock Holmes,” a retrospective designed to bring the prowess of fiction’s celebrated investigator to life.

Sanctioned by the estate of the sleuth’s creator, Sir Arthur Conan Doyle, the exhibit explores scientific methods the master of detection employed in the tales, as well as the Victorian era of his times. Columbus is the second stop for the exhibition, which will travel the country before going abroad next year.

“[It] was such fun to work on,” says author and Cleveland native Daniel Stashower, who co-created the exhibit for Geoffrey M. Curley + Associates, a museum-content development firm based in Minnesota. “We purposefully set out to craft a mystery that lets visitors get hands-on experience with forensics, not just press their noses to the glass and watch other people.”

COSI patrons can become participants in the whodunit drama. They have the chance to decipher blood patterns found at the scene, examine footprint sizes and analyze chemical compounds for poisonous ingredients. 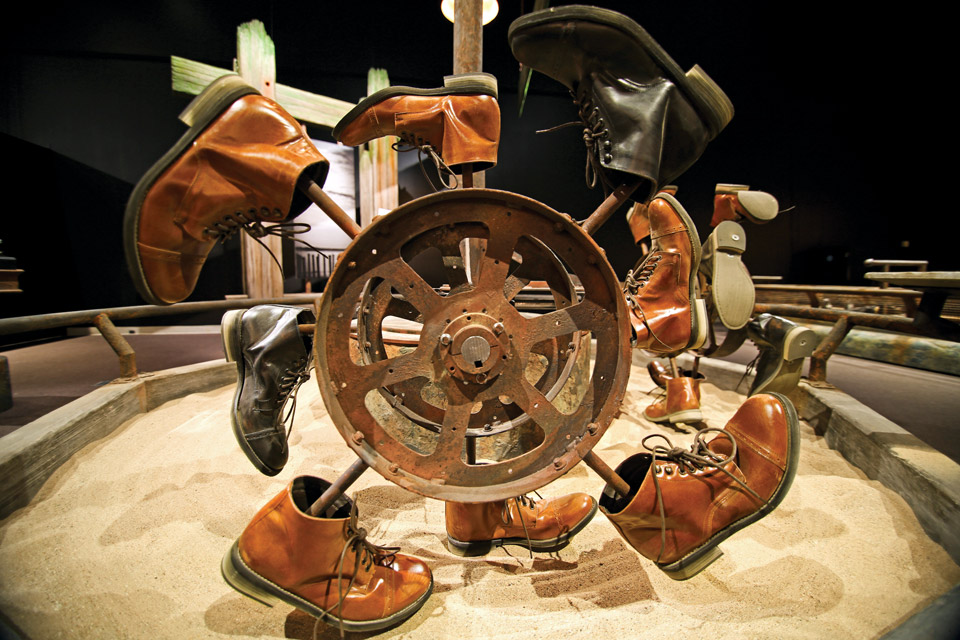 Visitors can investigate footprints from the crime scene. (photo courtesy of the Oregon Museum of Science and Industry)

To add to the ambiance, galleries have been fashioned to resemble settings indelibly associated with the renowned gumshoe: The study where Doyle, a Scottish physician, wrote most of his 60 Sherlock Holmes mysteries has been re-created and filled with original manuscripts and illustrations. A replica of the 221B Baker Street parlor where the investigator and his sidekick, Dr. Watson, compared notes, has also been painstakingly assembled — right down to a model of the iconic Persian slipper that served as Holmes’ tobacco pouch.

“I just love the fact that the exhibit’s prop masters took such great care with the details,” Stashower says. “They even [colored] the wallpaper in the sitting room to look as though it belonged to a place where the occupants were heavy smokers. Only about one in 100 people will notice that, but for the person who does, it’s there.” 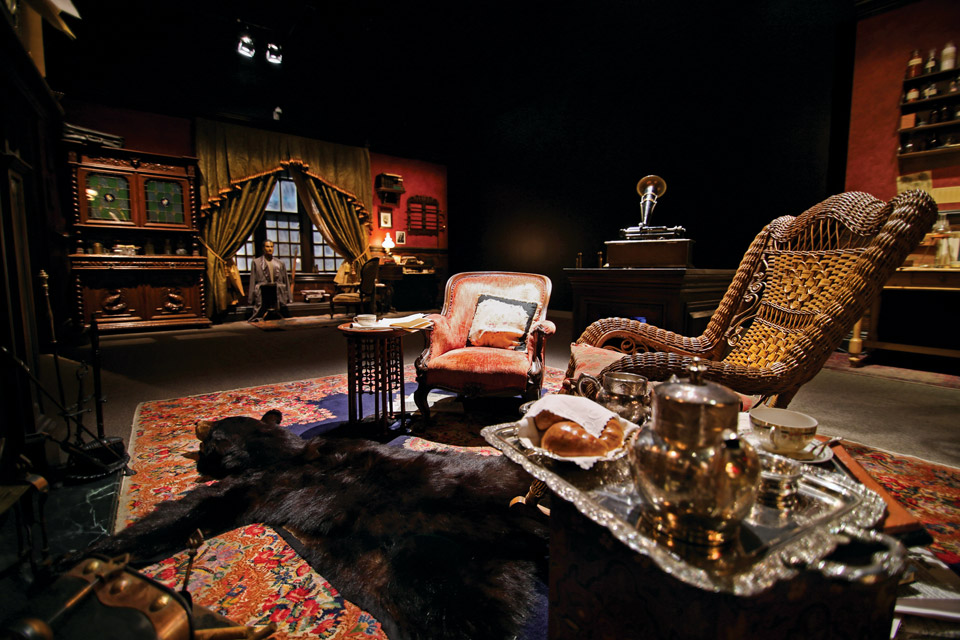 The exhibition also delves into the ways Doyle’s hero has evolved in popular culture over the last century. Movie posters from the ’40s harking back to the days when actor Basil Rathbone donned the deerstalker are displayed next to costumes worn by Jonny Lee Miller in CBS’ new series, “Elementary,” and Benedict Cumberbatch on the BBC TV show, “Sherlock.”

Ben Malczewski, Humanities Department manager for the main branch of the Toledo-Lucas County Public Library, understands why the 56 short stories and four novels published between 1886 and 1927 continue to mesmerize generations.

“The reader and Sherlock Holmes are presented with the same clues at the same time,” explains the librarian, who became enthralled with the tales while earning a bachelor of arts degree in English from the University of Edinburg, Doyle’s alma mater. “The fact that we’re called upon to separate the red herrings from the ultimate solution makes for a riveting read.

“The lessons we learn,” he adds, “can help us solve dilemmas in our own world.”

A Study in Scarlet (1888): “The recipe for Holmes’ legend was not accidental, and evidence of what makes Arthur Conan Doyle’s detective so appealing is clearly displayed [in this first novel]. Here, we meet and observe Holmes from Watson’s perspective as he tries to make sense of Holmes’ mysterious brilliance and deductive prowess.”

The Adventures of Sherlock Holmes (1892): “Part of what made Doyle’s Sherlock stories exceptional was the motif that detection takes center stage.” Malczewski adds that short stories in this collection include “A Scandal in Bohemia,” “The Red-Headed League” and “The Adventure of the Speckled Band.” “But every tale delights with signature plot twists.”

The Hound of the Baskervilles (1902): “Doyle was captivated by Edgar Allan Poe’s work. In this novel, arguably the most popular and well-known Sherlock adventure, the moody atmosphere and haunted undertones call to mind a Poe thriller and set the stage to showcase Holmes’ championing logic over mysticism.”

The Return of Sherlock Holmes (1905): “Even though Holmes became one of the most popular literary characters in fiction, Doyle was never the most willing author. ... In fact, as early as 1891, Doyle was planning to do away with his increasingly popular sleuth. This collection of short stories marks the author’s return to the character after unsuccessfully killing him off in “The Adventure of the Final Problem,” published in 1893. Part of the fun is reading Doyle’s deconstructive undoing of Holmes’ demise and learning what Holmes did during his missing years.”