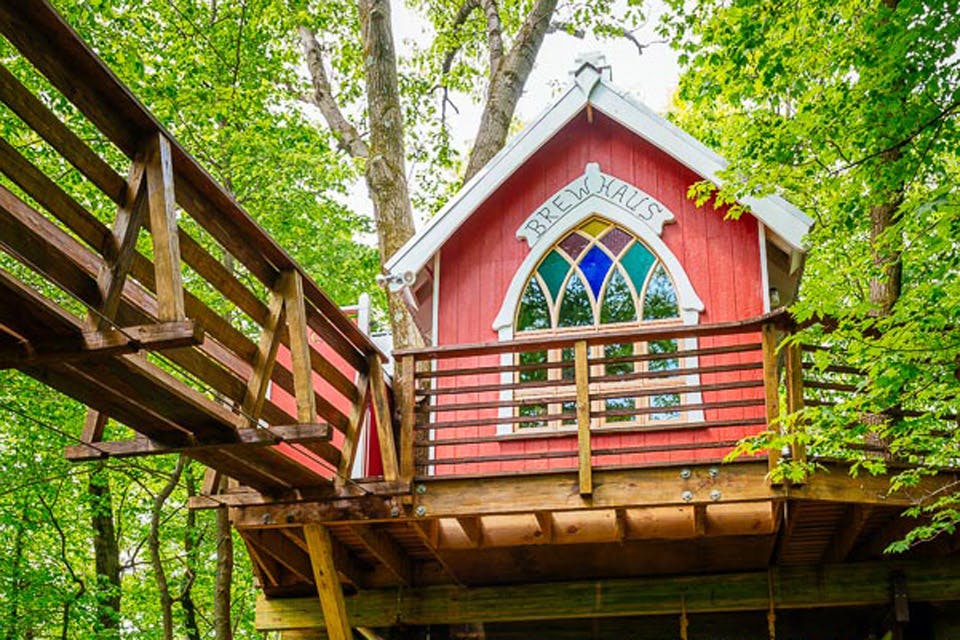 Our Getaway at the Brew Haus: A Treehouse at The Mohicans

We spend a night in a treehouse and find one altogether different getaway.

The steep path through the woods looms ahead — half-sunken stepping stones arranged haphazardly to mimic the randomness of nature. Occasionally, gnarly exposed tree roots interrupt the series of steps, as if the land were lifted from the imagination of J.R.R. Tolkien.

A wooden flight of stairs comes next, taking visitors 25 feet off the ground and across a 40-foot-long suspension bridge that bounces and sways. OK, maybe this place is more Indiana Jones than Tolkien. You immediately wonder why you brought a suitcase. A backpack would have made more sense.

The journey leads to the Brew Haus, a 200-square-foot structure that seems as at home as a bird’s nest does among the treetops of Jefferson Township, just south of Loudonville. It is one of The Mohicans’ two treehouses — both designed by legendary treehouse builder Pete Nelson of Seattle. Nelson traveled to Ohio to lead the construction job, and the structures were featured last year in an episode of Animal Planet’s “Treehouse Masters.”

“The most common thing people say about staying in our treehouses is that it’s magical,” says Kevin Mooney of Cleveland. He owns the property with his wife, Laura. “And, everyone says they want to come back.”

The Mooneys both have many happy memories of spending time on the Mohican River and in its surrounding woods. Kevin had made a career as a successful financial consultant, so when his business partner offered to buy his half of the operation in 2005, he and Laura took the leap and bought the first portion of the acreage they own today. The couple built several cabins, but changed focus after seeing a book about treehouses. When they flew Pete Nelson to the property in 2011, the Mooneys began to see the forest for the trees, so to speak.

“I studied the area and I saw that most of the cabins were primitives,” Kevin says. “I knew that lodging that was special and really a cut above would be appreciated here." 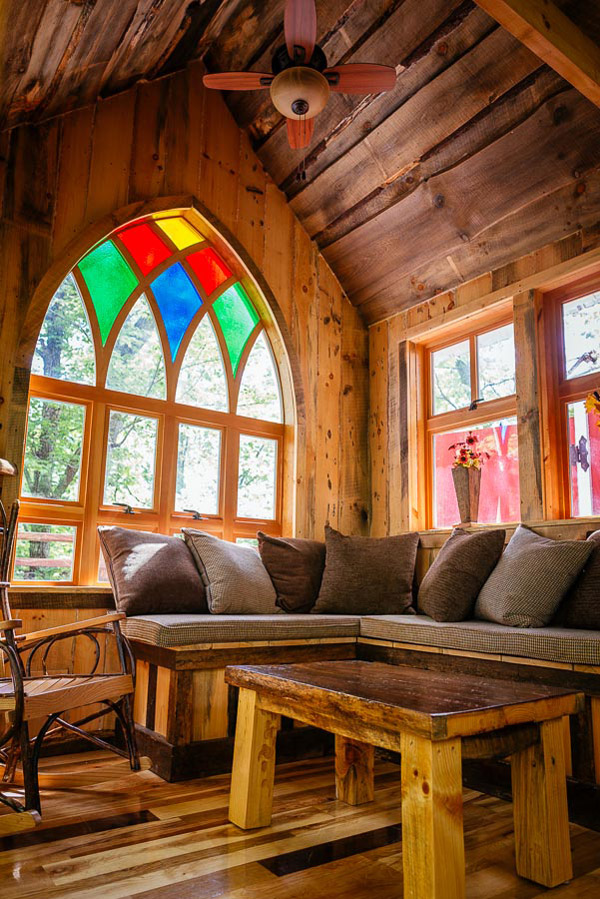 “The most common thing people say about staying in our treehouses is that it’s magical,” says Kevin Mooney of Cleveland. He owns the property with his wife, Laura. “And, everyone says they want to come back.” (photo by Jeffrey Chandler)

As its name implies, the Brew Haus was originally built as a brewery and tasting room for Treehouse Brewing Co., founded by the Mooneys’ son, Kevin Mooney Jr. But the demand for a second treehouse convinced the couple to convert it to another rental last September. (The brewery has since moved to the property’s Grand Barn, an event facility.) Laura is responsible for the interior design of the treehouses. She and Kevin hope to ultimately build a total of 12 on their property.

For those of us who’ve ever wondered what it would be like to live among the treetops, the Brew Haus provides a warm and welcoming answer. Tree limbs hang over the structure’s wraparound deck like loving arms, and you can actually hug the trunk of one tree that shoots up through an opening in the floor.

On the deck at night, it’s at first difficult to tell the difference between faraway flashing fireflies and twinkling stars. Both provide lovely pinprick-sized lanterns that hang in a dark sky. The night is also quieter than expected. At ground level, you often hear animals rustling among the foliage and sometimes your own footsteps. But in the upper canopy of the forest, I heard only the call of a solitary owl.

The Brew Haus’ interior is charming as well. Much of the furniture, cabinets and built-ins are handcrafted from trees found on the property or repurposed from old barns and other structures. The kitchenette offers a microwave oven, two-burner unit, fridge, sink and teakettle. The living area has a built-in sofa topped with soft cushions and a great rustic rocker. A 6-foot-high Gothic-style window with clear, blue, yellow, red and green stained glass serves as the focal point of an entire exterior wall, and during the day, the incoming sunlight makes colors dance on the shiny hardwood flooring.

“We wanted the treehouse to have a local flavor, and it does with the exterior red barn color and the Gothic window — a nod to an early design theme of an 1800s Ohio barn,” says Laura. “We didn’t want anything modern.”

Yes, there is the all-important inside toilet, although the Brew Haus’ shower is outside, tucked behind a small, whimsical cubicle. The treehouse is very secluded and unless you are worried about voyeuristic squirrels, you can make a mad dash out the door and back in a towel and retain your modesty. Guests must climb a sturdy-but-vertical ladder to crawl into the bedroom loft’s platform bed, and it can get a touch claustrophobic in the small space under the roof’s peak.

Of course, tree lover that I am, I had to ask: Does a treehouse hurt the trees which support it? 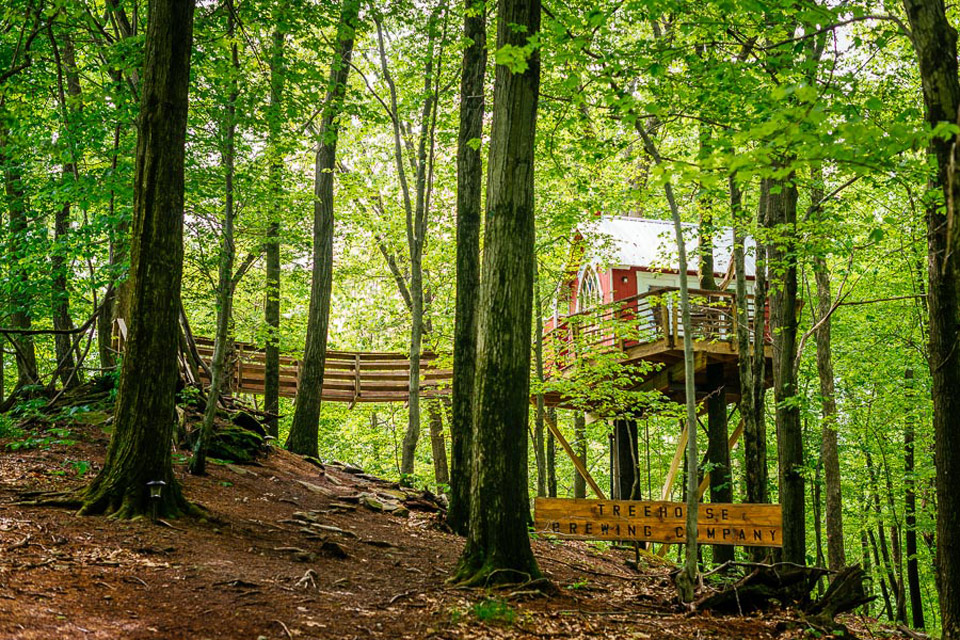 A 40-foot-long suspension bridge leads visitors to Brew Haus' wraparound deck, which is hugged by the trees that surround it.

“I’ve read that treehouse trees can actually live longer than normal because they are cared for,” says Kevin. “I had an arborist out here recently who told me I should feed the trees fertilizer and I will. And our treehouse and bridge are engineered to cause the least harm. We borrowed a lot of technology from zip-line construction.”

At some point, another question crosses one’s mind: Could I live in a treehouse full time? Probably. On most days. Although Mother Nature tested my husband and me during our overnight stay. Earlier in the evening, we had watched a light show of sorts from our perch — lightning flashes in the sky many miles away. But the 1 a.m. text-message weather warning on our phone was in all caps: THERE IS NOW A TORNADO IN YOUR AREA. SEEK SHELTER IMMEDIATELY.

I thought about running across the bridge, down the stairs and through the woods to where we had parked our car. But the treehouse was swaying ever so gently in the wind. The storm eventually passed to the east without incident.
It must be primordial, but I felt safest in the tree. 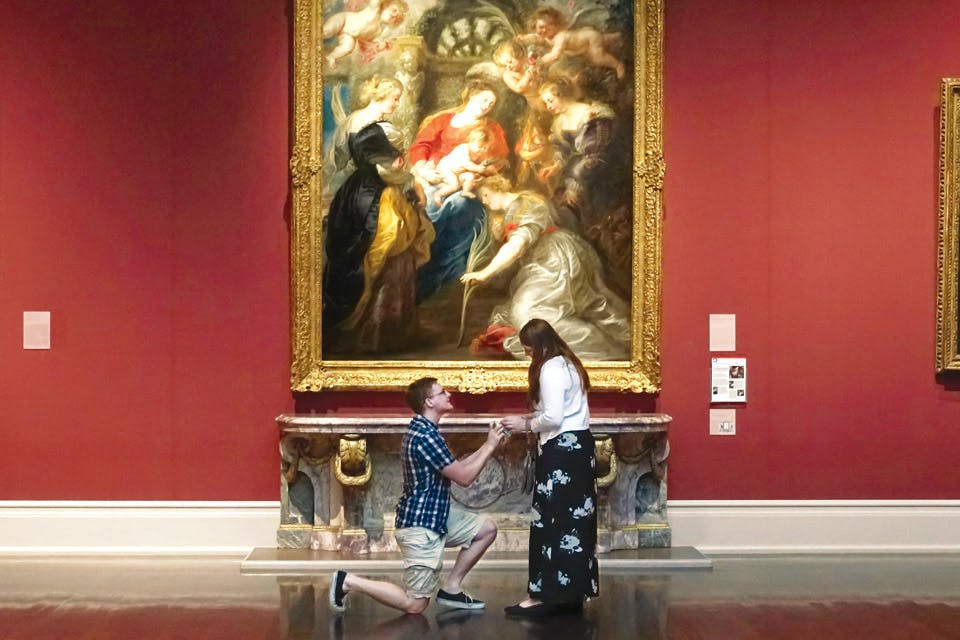 Put a spark in your next evening out with your sweetie. These Ohio destinations offer fun and romance. READ MORE >> 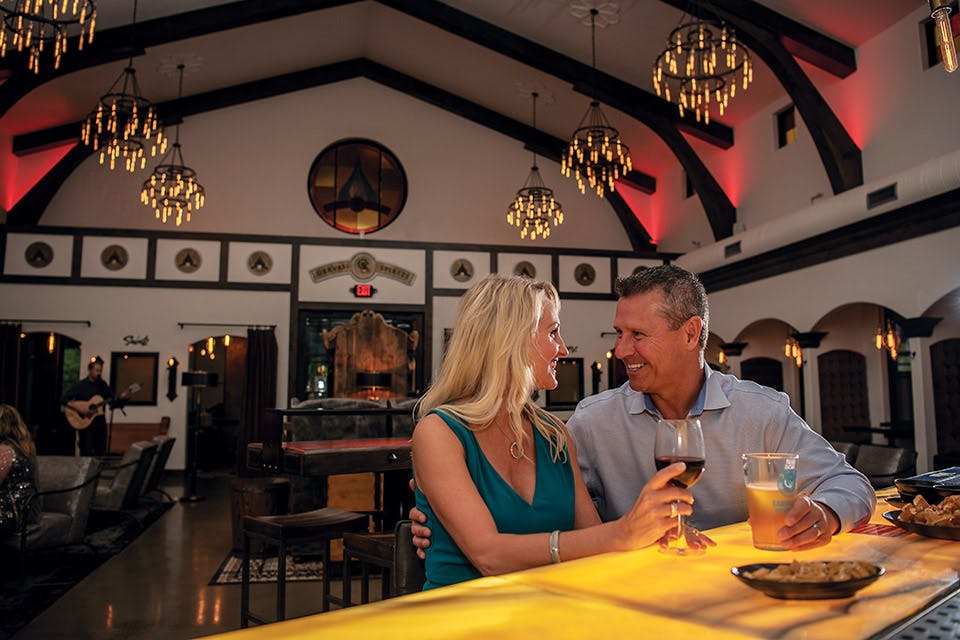 Whether you prefer a Tuscan-inspired vineyard, a nature-infused hotel or a resort-style escape, these three destinations offer plenty to do without ever leaving the property. READ MORE >> 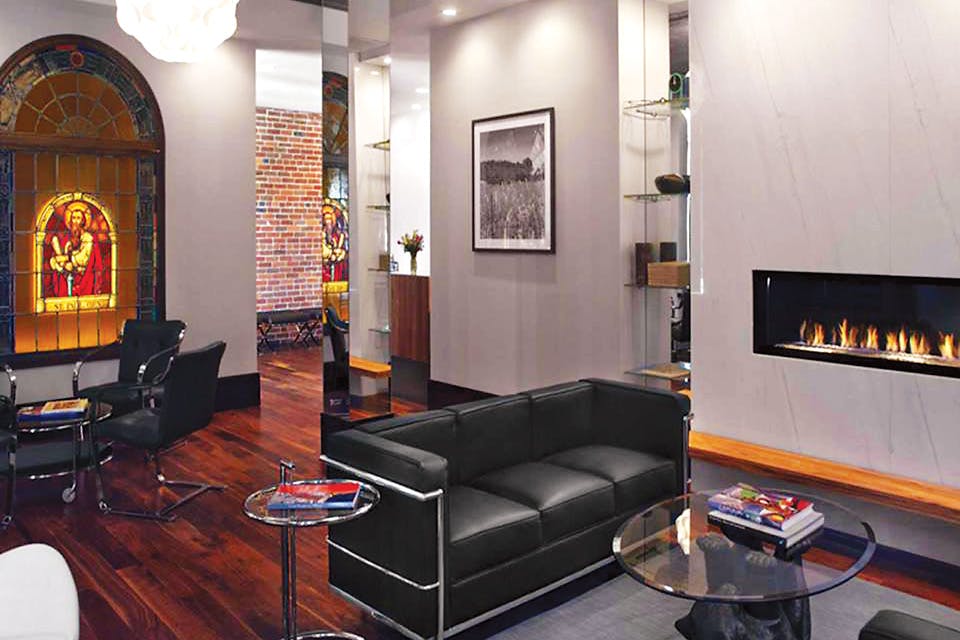 These three creative and comfortable hotels offer a welcoming place to stay as well as nearby shopping, dining and entertainment options for making the most of your time together.  READ MORE >>