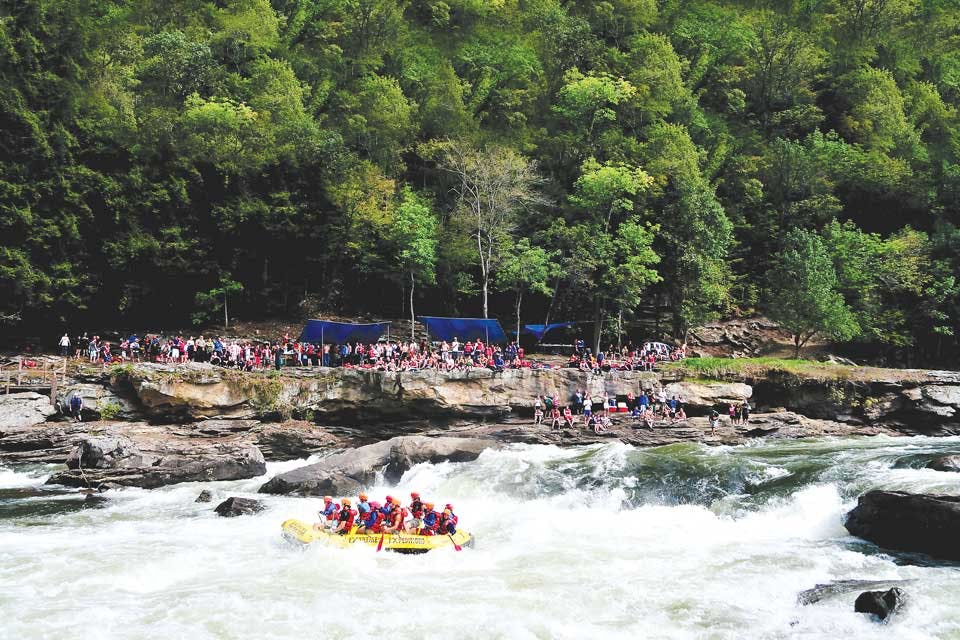 From catwalks and caves to raptors and riverboats, these five destinations make great road trips for weekend explorers.

When most other rivers have closed for the season, the Gauley River is at its peak. Over six weekends starting the Friday after Labor Day, the U.S. Army Corps of Engineers has 22 controlled releases on the river that lead to major whitewater perfect for rafting — a time known throughout West Virginia as Gauley Season.

“It’s one of the Top 5, single-day commercial trips in the world at fall flows,” explains Heather Johnson, co-owner of River Expeditions.

The 105-mile-long river runs from the Gauley Mountain in Pocahontas County to the Kanawha River in Fayette County. The Lower Gauley consists of 12 miles of whitewater appropriate for first time rafters, while the Upper Gauley is best for advanced and experienced paddlers due to its intense whitewater.

River Expeditions offers a full-day trip that lasts around seven hours total, including orientation and transportation. Along with time on the water, a key feature of the guided tour is a riverside lunch. Those on the Upper Gauley outing enjoy the meal while overlooking the Class V rapids they just navigated.

“You have paddlers from all over the world, literally, coming to southern West Virginia to experience this river run in such a short amount of time,” Johnson says. “After all the rivers have basically shut down, we still have the Gauley in the fall.” River Expeditions, 900 Broadway Ave., Oak Hill, West Virginia 25901, 800/463-9873, raftinginfo.com

A short-but-steep, mile-long hike in Jefferson National Forest leads to a ridge where an old fire tower now serves as the Hanging Rock Raptor Observatory. Located around 3,812 feet above sea level, the spot is a great place to watch hawks, eagles, falcons and osprey as they soar above the lush trees below during the mid-to-late September migration season.

“The Raptor Observatory offers a great panoramic, 360-degree view of both West Virginia and Virginia,” explains Toby Hutchens, a forestry technician for Jefferson National Forest. “If you go up in the fall time, you get to see the changing of the leaves [and] you get to see some of the migratory birds coming through.”

The tower, which was built in the 1930s and then abandoned during the 1970s, opened to the public in 1996. Its perch high above the rest of the forest means there’s wind even in the hottest of summer months. There can be an 8-to-10-degree drop in temperature from the bottom of the trail to the top.

“There’s not a lot of fire lookouts left in this part of the country,” Hutchens says. “I really just love that place. It’s a really unique, interesting spot.”

Hutchens suggests sharing rides to the trailhead as the road leading to it can get congested and parking spaces can be scarce on busy days.

“I don’t want this to discourage from having anyone come up,” Hutchens says, “[but] carpooling is strongly advised.” Limestone Hill Road, north of Waiteville, West Virginia 24984, hangingrocktower.org 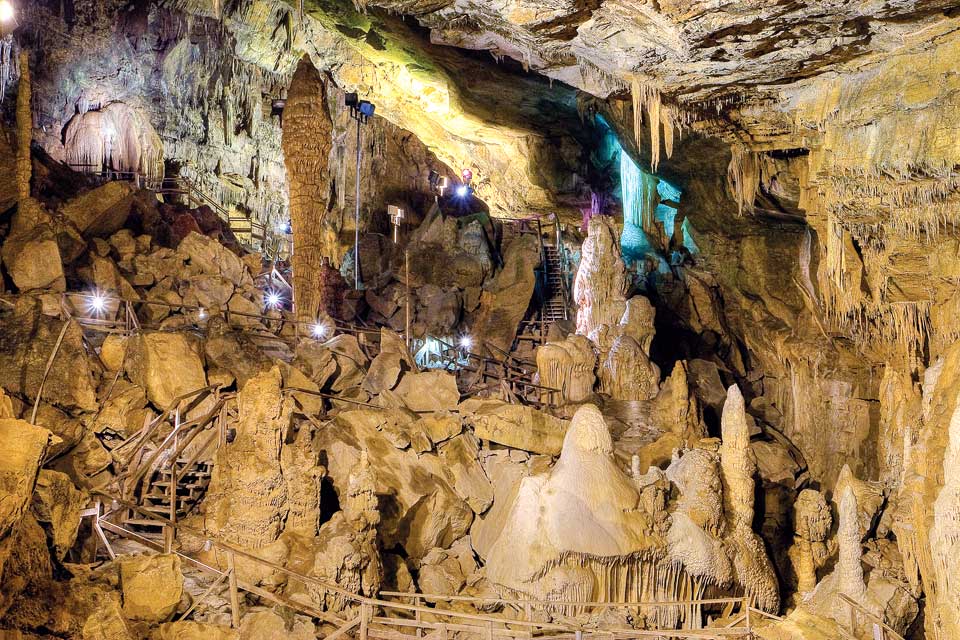 Deep below Greenbrier County lies a cavern system filled with cool air and incredible rock formations. From its discovery in 1942 to this day, Lost World Caverns, located just outside of Lewisburg, has offered the promise of a subterranean adventure.

Lost World Caverns provides visitors two experiences from which to choose. There is the popular self-guided tour through the main cavern in which explorers navigate the roped paths at their own pace, taking photos and gazing at their leisure. This tour, which usually lasts around 45 minutes to an hour, follows a large loop and features the main cave, which is 1,000 feet long and 12 stories tall.

“It’s a real pretty cavern,” says Steve Charlton, co-owner of Lost World Caverns. “It’s like being in a stadium.”

The other option is a Wild Cave Tour, which delves deeper and provides an experience not for the faint of heart.

“We take you through that cave where everyone takes the normal tour, and then we jump the railing and we go back even farther where there’s no lights, there’s no trails,” Charlton explains. “You’re climbing, crawling and squeezing though very small spaces. Some of the spaces are as small as 12 inches to go through from floor to ceiling. You get muddy from head to toe.”

Work up the guts to cross the New River Gorge Bridge’s 3,030-foot-long catwalk and you’ll be treated to a view of West Virginia unlike any you’ve seen before. The New River surges 851 feet below, while cars and trucks pass by overhead.

“You have the best views of the New River Gorge from above,” says Doug Coleman, a Bridge Walk guide since 2011. “This time of year we quite often see whitewater rafting going on below us.”

Although completed in 1977, the bridge has only been open for tours since 2010. The excursion lasts two or three hours, and visitors are fastened to a safety cable before heading out onto the catwalk. The leisurely pace allows guests to stop for photos as well as ask the tour guides questions.

Along with the year-round Bridge Walk tours, the New River Gorge Bridge also celebrates Bridge Day every third Saturday in October to commemorate the structure’s importance to West Virginia. On that day, the bridge is closed to traffic, allowing pedestrians to walk the bridge and the truly adventurous who preregister to parachute or rappel from the catwalk to the canyon floor.

The New River Gorge Bridge holds the distinction of being the longest single-span bridge in the Western Hemisphere, making the structure a curiosity as much as it is a place to amp up your adrenaline for an afternoon.

“People come mostly for the engineering and the views and the heights,” Coleman says. Tours offered daily except Thanksgiving and Christmas; 57 Fayette Mine Rd., Lansing, West Virginia 25862, 304/574-1300, bridgewalk.com

Ride the Sternwheeler to Blennerhassett Island

If you want to visit Blennerhassett Island Historical State Park, you’re going to have to do it by paddleboat, and the up-to-30-minute journey on the Ohio River offers a glimpse into a bygone era.

“It’s a nice, relaxing ride,” says Miles Evenson, superintendent of Blennerhassett Island. “It gives us a chance to go back in time and see how people would have traveled on the river back then.”

After leaving Point Park in Parkersburg, the sternwheeler’s captain shares the history of the river and the island with passengers, and there’s plenty of it. The island is named after Harman Blennerhassett, a wealthy Irish aristocrat who began building a mansion on the island in 1798.

There are guided tours of the reconstructed mansion and horse-drawn covered wagon tours of the 500-acre island. But it’s not all history. Blennerhassett Island is also a destination for those who want to rent bicycles or ride their own. Island visitors are also welcome to bring their dogs and picnic lunches.

“We really are both a historical park and an opportunity for people to come over and just enjoy the island and enjoy the day,” Evenson says. Tickets for the sternwheeler available at the Blennerhassett Museum; 137 Juliana St., Parkersburg, West Virginia 26101, 304/420-4800, wvstateparks.com