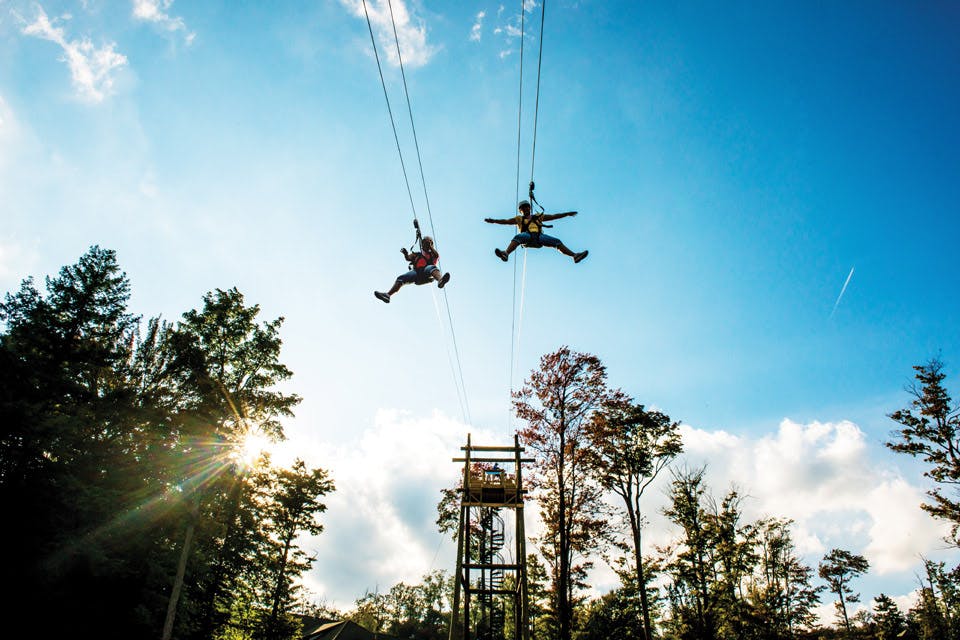 First-time visitors to Presque Isle State Park, a 3,200-acre sandy peninsula that arches out into Lake Erie from Erie, Pennsylvania, almost always have the same reaction. “They’re just amazed at how it looks like the ocean,” says Anne Desarro, the park’s environmental education specialist.

In all, there are 7 miles of beaches. Visitors can find a spot with groomed sand and lifeguards or they can explore away from the crowds. To see a bit of everything, make your first stop at the Yellow Bike Rental Co. and hit the 13.5-mile asphalt trail that loops around the park.

From Yellow Bike, the ride starts under the cover of shade before breaking out into the sunshine of Beach 11. Tucked into a natural harbor, its calm waters are great for little ones. Each of the nine beaches has its own identity, from the windsurfers at Budny Beach to the wooden boardwalk at Beach 7. 301 Peninsula Dr., Erie, Pennsylvania 16505, 814/833-7424, dcnr.state.pa.us

This summer, you can be among the music fans gathered at the foot of the Allegheny Mountains as Ringo Starr takes the stage. Concerts under the stars (as well as indoors) are just part of the fun at Seneca Allegany Resort & Casino.

The indoor pool’s wall of windows provides mountain views, and the on-site spa offers a full slate of services. Hungry travelers can stop by the Thunder Mountain Buffet or hit the Western Door Steakhouse.

The resort’s most unique feature, however, is its gaming floor. Like just about every other U.S. casino, Seneca once had slot machines with 28-inch bases. General manager Gus Tsivikis had the machines replaced with ones that have 32-inch bases, as well as built-in footrests and larger, adjustable chairs.

The Chautauqua Institution is known for attracting lifelong learners to the shores of Chautauqua Lake for its summer seminars, performances and recreational opportunities.

It would be a mistake, however, to compare a stay at Chautauqua to college finals week. With all of the revelry around the lake, it’s more like rush week.

Mayville, located on the north side of the lake, has both fine and fun dining options. The Watermark Restaurant has two outdoor seating areas right on the water, and La Fleur’s executive chef, Jonathan Haloua, was born, raised and attended culinary school in Paris.

Then there’s the town of Bemus Point, on the east side of the lake, which is home to the Bemus Bay Pops and its famous floating stage. The Chautauqua Institution, 1 Ames Ave., Chautauqua, New York 14722, 800/836-2787, ciweb.org

“We’ve got 30,000 acres of grapes, which is a very large number,” says Julie Ellis, executive director of the Lake Erie Wine Country nonprofit that supports the region. “We also have a rich history. We actually started in the 1800s.”

Many of the best-sellers are made from sweeter native grapes such as Niagara and Concord, but there are also plenty of award-winning wines (think Riesling and chambourcin) being produced from French-hybrid varietal and European vinifera vines.

“My father-in-law was an experimenter and also a pioneer because he planted French-hybrid grapes,” says Jennifer Johnson, who owns Johnson Estate Winery with her husband. “And he planted those in a sea of Concords.”

Before she died in 1989, Lucille Ball told her daughter, “I don’t want a damn statue. I don’t believe in that stuff.” But Ball did believe deeply in the power of laughter — a mission that drives the Lucille Ball Desi Arnaz Museum in Ball’s hometown of Jamestown, New York. There, you’ll find re-created sets, including Lucy and Ricky Ricardo’s

New York City apartment and artifacts from the show. “We have a saxophone from one of the episodes with a little remnant of Lucy’s lipstick,” says Allison Rabent, curation and archives coordinator. “So that’s pretty cool.”

It doesn’t get much more thrilling than the mountainside aerial adventure parks at New York’s Peek’n Peak and Holiday Valley resorts.

“Our guests are always telling us how much fun the adventure course is for the entire family,” says Alison Scott, executive marketing manager for Scott Enterprises, which owns Peek’n Peak Resort.

Holiday Valley’s Sky High Adventure Park includes 13 courses set on 4 acres. There is a Climbing Forest with 10 trees outfitted with color-coded climbing holds that indicate the course’s difficulty. The Sky Flyer Mountain Coaster allows riders to spiral down through the trees on a track that follows the terrain.

While you’re at Holiday Valley, be sure to head a mile or so down the road to explore the village of Ellicottville and its many shops and restaurants.