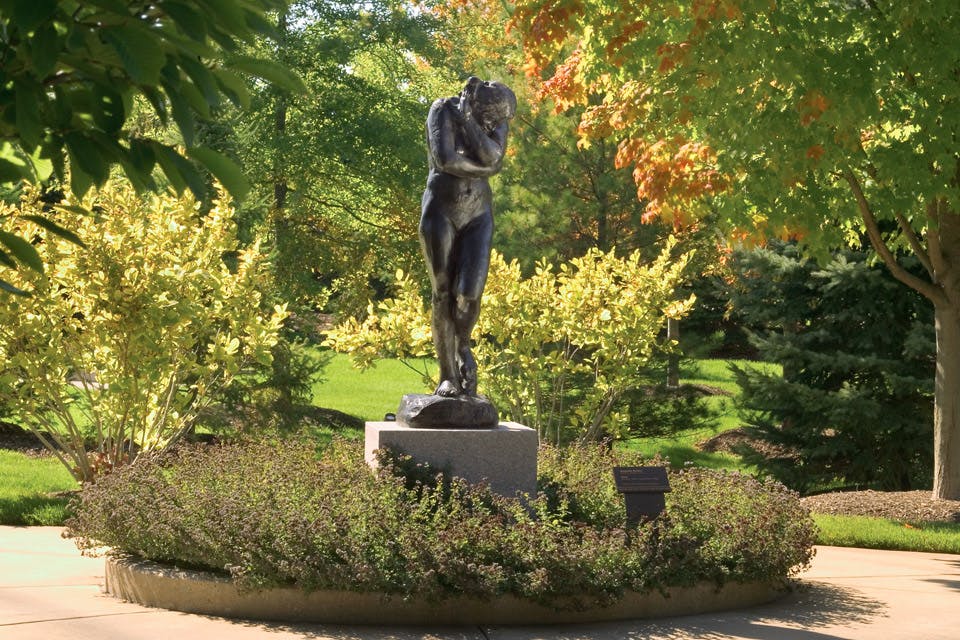 These six destinations are great places to spend time exploring culture, history and art. Here’s what you’ll see at each this fall.

Western Michigan’s natural light makes fall one of the best times to stroll through the Frederik Meijer Gardens & Sculpture Park, as it brings out the garden’s crimson, orange, plum and gold chrysanthemums.

“The autumn months are some of the most beautiful months here,” says Joseph Becherer, chief curator and vice president of the gardens. “Because we’re on the edge of the Eastern Time Zone and we have the water nearby, we really enjoy a beautiful golden light.”

The Meijer Gardens span 158 acres, including five indoor gardens, a five-story tropical conservatory, outdoor gardens and sculpture galleries connected by nature trails and a boardwalk that traverses natural wetlands. Open year-round, something is always in bloom in the gardens, and art lovers can enjoy seasonal exhibitions in addition to more than 300 sculptures permanently on display throughout the grounds.

This fall, Meijer Gardens is hosting an international exhibition in conjunction with DisArt, an arts and culture organization in Grand Rapids that works to promote the work of artists with disabilities. The exhibition, “Process and Presence: Contemporary Disability Sculpture,” runs through Jan. 6, 2019. It features works by artists from Australia, England, Japan, Taiwan and the U.S. 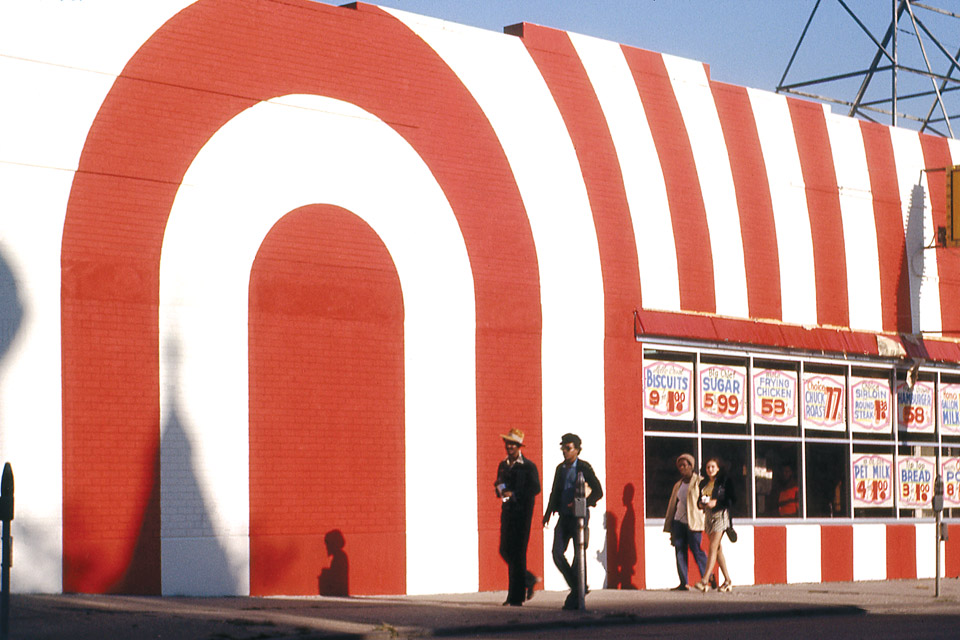 Anyone can be a photographer, and the Detroit Institute of Arts’ new exhibition, “Lost & Found: Photographs from the DIA’s Collection” proves it. More than 200 photos found at flea markets, garage sales and more are on display in this collection of vernacular photography, which runs through March 3, 2019.

Many of these photos showcase Detroit in the 1970s, such as black-and-white snapshots taken in diners and barbershops as well as scenes on city streets.

Among the DIA’s more than 100 other galleries is Diego M. Rivera’s “Detroit Industry Murals,” painted between 1932 and 1933. The frescoes span four walls and depict life working in the auto factories of Detroit.

“There’s a scale and monumentality of those frescoes that is unprecedented [in the U.S.],” Barr says.

The details in the murals are just as impressive. If you look close enough, Barr says you can find Rivera’s self-portrait as well as depictions of the controversial and the revered in Detroit, including Thomas Edison and Henry Ford. 5200 Woodward Ave., Detroit, Michigan 48202, 313/833-7900, dia.org

The Henry Ford museum tells stories of ingenuity and innovation that brought along technical advances, but it also showcases artifacts that helped spur social change. Visitors can learn about America’s freedom fighters in the “With Liberty and Justice For All” exhibit, which includes the Montgomery city bus on which Rosa Parks refused to give up her seat and a handwritten copy of the 13th Amendment.

In that vein, a new exhibition, opening Oct. 13 and running through Jan. 13, 2019, centers on the power of images during World War II. Artists were commissioned to create art to support the war effort in the early 1940s, and “Enduring Ideals: Rockwell, Roosevelt & the Four Freedoms” showcases 300 paintings, illustrations and ephemera.

The main focus of the exhibit is artist Norman Rockwell’s depictions of President Franklin D. Roosevelt’s belief in four freedoms — freedom of speech, freedom of religion, freedom from want, and freedom from fear — articulated in his 1941 State of the Union address.

“This is not just an exhibit of nostalgia,” explains Kate Morland, exhibits manager at The Henry Ford, adding that serious topics are confronted. “There are also depictions of war, of anti-political scenes and anti-Nazi propaganda.”

The exhibit moves into the present day by including works illustrating current political topics, such as marriage equality, gender and racial issues. While walking through the collection, Morland says visitors are encouraged to “think about what freedom means today and what freedoms we are still fighting for.” 20900 Oakwood Blvd., Dearborn, Michigan 48124, 313/982-6001, thehenryford.org 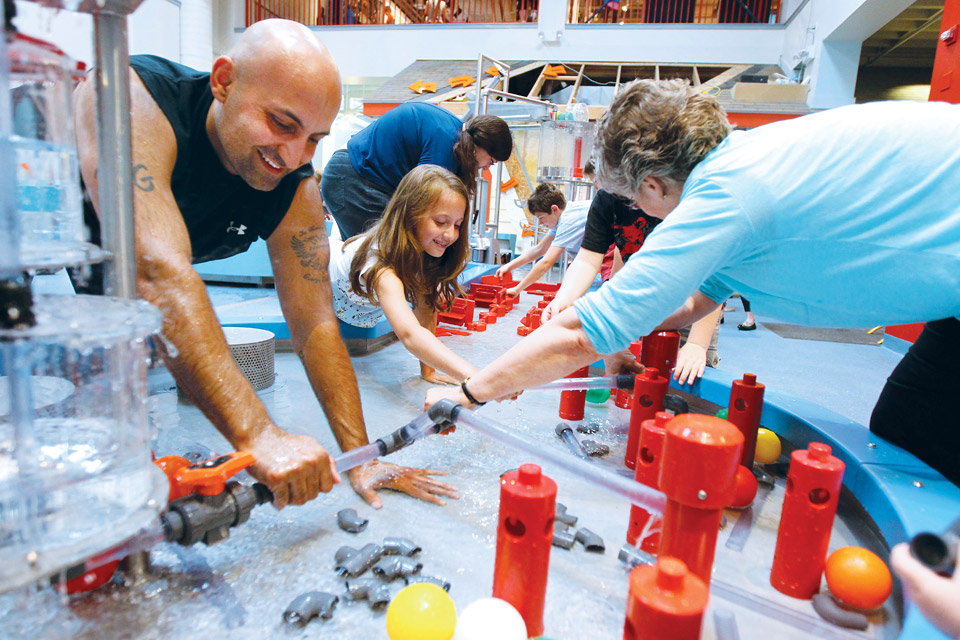 A trip to the Ann Arbor Hands-On Museum can include a visit to the Egyptian deserts, a stroll through the streets of Paris or a view of the North Pole. The museum’s “Explore Your World” exhibit acts as a giant Google Earth machine.

“You can go explore the pyramids or see the glaciers coming out of the mountains,” says Ari Morris, assistant director of operations at the museum.

“Explore Your World” is one of more than 250 activities visitors can engage in at the Ann Arbor Hands-On Museum, helping people of all ages learn about the sciences, technology, engineering and math by actively linking concepts together.

“It’s all about interactivity, not just reading it or hearing it,” Morris says.

It’s also about having fun. Visitors can learn about laminar flows, dams and canals and moving water in the museum’s “H2Oh!” exhibit, which includes activities that allow them to float plastic balls on jets of water and experience an indoor whirlpool. Children 4 years old or younger can explore the Preschool Gallery, which features activities that meet them where they’re at developmentally, such as sorting items by their size and color.

“The learning that’s happening has an emotional connection,” Morris explains. “When you’re feeling on a tactile level and when you’re having that experience, the learning is that much deeper.” 220 E. Ann St., Ann Arbor, Michigan 48104, 734/995-5439, aahom.org

Car enthusiasts can always revel in the Detroit Historical Museum’s “America’s Motor City” exhibit, which includes classic cars and recalls the innovations that earned Detroit the label. But new to its Automotive Showplace this fall is the Scripps-Booth company’s Cyclecar. The small and narrow vehicle popular between 1913 and 1915 seated two people — one behind the other, as if they were on a bicycle.

“They were notable because they were really fast,” explains Joel Stone, senior curator for the Detroit Historical Society. “They could go up to 50 miles per hour, which back in 1915 was pretty remarkable.”

While the Motor City is most known for its automotive history, it’s also known for the 1967 race riots that erupted on the outskirts of the city. The Detroit Historical Museum’s “Detroit 67: Perspectives” exhibit pays homage to that event by sharing not only stories from the five days of rioting, but explaining the origins of the problems leading up to the riots and the changes that followed. To tell the tale, Stone and the museum staff collected more than 500 oral histories from people who lived those experiences. 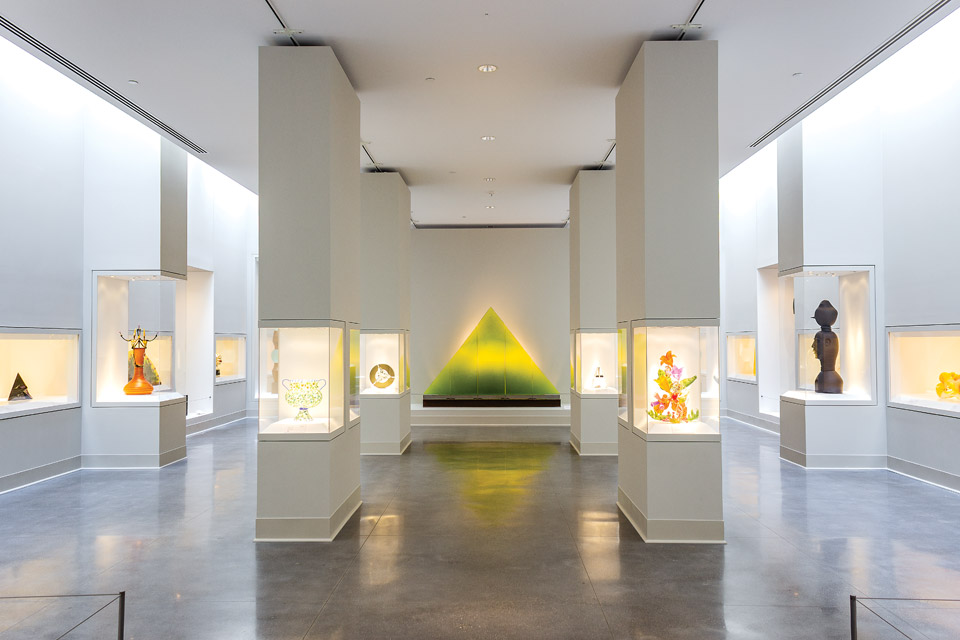 In celebration of its 90th anniversary, the Flint Institute of Arts is hosting a special exhibition paying tribute to members of the community that have supported the institution.

“It follows the history of our 90 years and highlights significant moments, like when a donor contributed a piece of art,” explains Tracee Glab, curator of collections and exhibitions.

“Collecting Stories,” on display through Nov. 4, gives visitors the backstory on many of the museum’s most notable works, like that of American painter Leon Kroll’s 1913 work, “Terminal Yards.”The oil painting was originally on display at The Armory Show in New York, where Arthur Jerome Eddy, a lawyer and Flint native who doubled as an art collector and critic, purchased the piece. His wife gifted it to the museum in the 1930s.

New to the museum is the Contemporary Craft Wing, which opened in April. The 11,000-square-foot space was designed to feature glass works and has skylights to allow natural light to illuminate its 120-piece collection.

“Glass comes alive with light,” Glab explains. “You can intuit that from your experience with windows or even a drinking glass. You see it light up, and you can see all the colors it captures.”