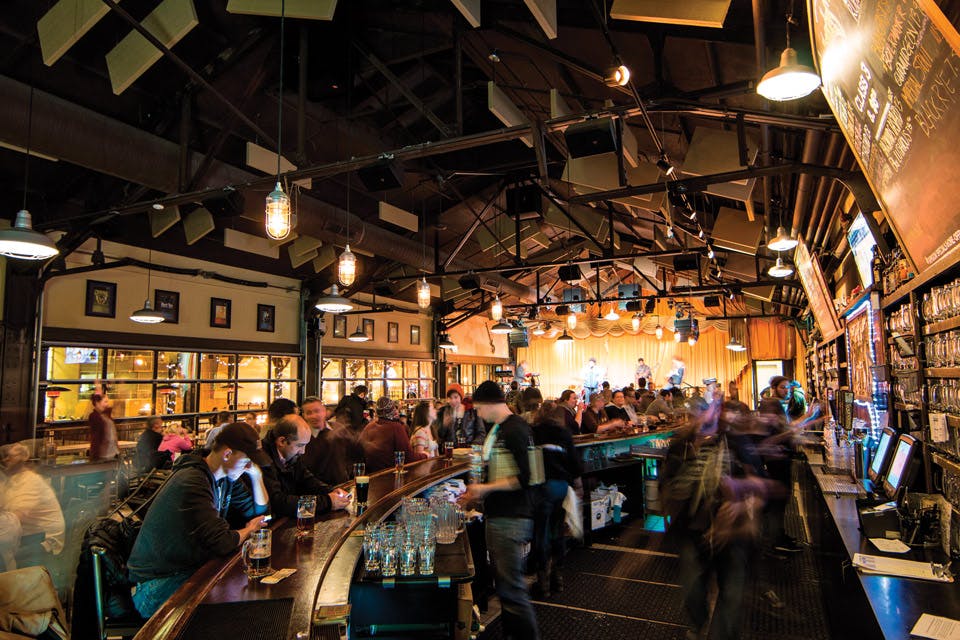 Our neighbors to the north are serious about brewing creative and tasty beers.

It’s a good time to drink beer in Michigan.

In fact, there may never have been a better time to get acquainted with what’s brewing up north.

According to the Brewers Association, 2015 was a record-breaking year for American craft brewers, and Michigan ranks No. 6 among all states with a total of 159 of America’s 4,225 craft breweries. (Ohio comes in at No. 10, with 110 breweries in 2015).

Many of Michigan’s most interesting beers will never make it to Ohio store shelves. Premium seasonal brews and small-batch beers remain reserved for breweries’ private taps. Food menus grow ever more inventive. Add in live entertainment and you’ve got every reason to head to Michigan.

British-style ales inspired Tim Suprise back in 1996, when Arcadia Ale’s founder launched his craft brewery in Battle Creek. And those British beers still form the backbone of Arcadia’s success.

“We use the same English yeast strain that we started with in an open-fermentation system,” says Suprise. The formula was so successful that Arcadia launched a second location in Kalamazoo in 2014.

A visit to Arcadia’s Battle Creek and Kalamazoo pubs allows tastes of the award-winning Arcadia IPA, as well as mainstays like Loch Down Scotch Ale, Angler’s Ale and Thunder Trail ESB. Besides the beer, Arcadia’s Battle Creek pub serves entrees and pizzas baked in an Italian wood-fired oven, while the Kalamazoo brewery relies on house-smoked meats.

And the Kalamazoo Riverfront Tavern ranks as an attraction in its own right. The 1-acre lot includes a kitchen garden that produces items for Arcadia’s menu. Perennial beds and a fire circle add to the appeal, and a canoe and kayak launch offers the promise of even more fun. A live music stage arrives this summer.

From IPAs to stouts, from Scotch ales to porters, Founders Brewing Co. has made a name for itself with one of craft brewing’s most diverse beer menus.

Glass garage doors open onto a porch and beer garden in warm weather, while fire pits and heating units keep the outdoors comfortable during cooler months. Live music has become a mainstay at Founders, featuring local, regional and national acts.

“We are one of the few venues in the country that offers weekly free shows,” says Dorich, “meaning no cover charge or ticket price. Our entertainment programming culminates each year with our summer street party, Founders Fest.” 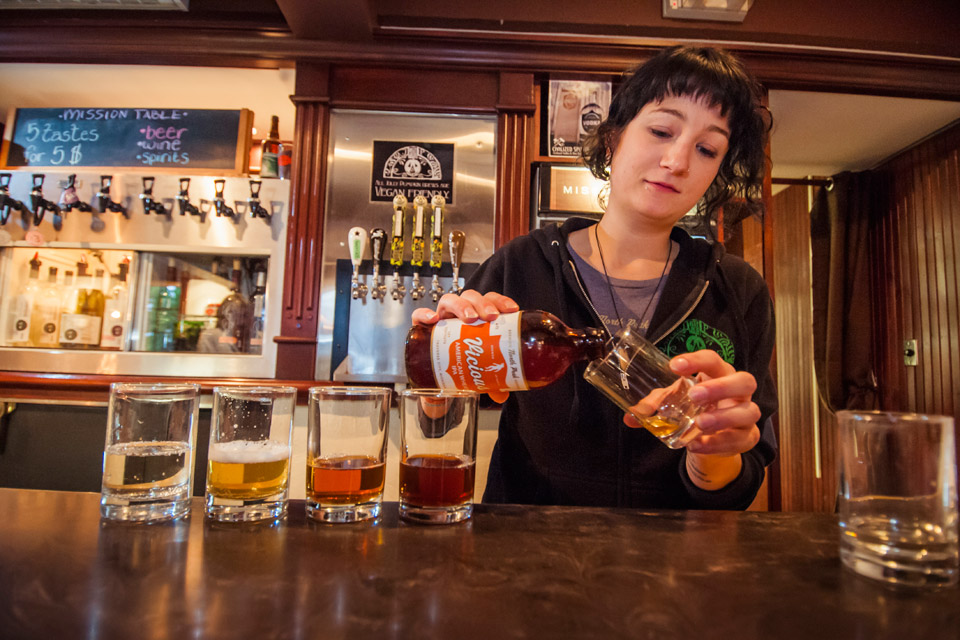 In addition to its Traverse City spot, Jolly Pumpkin Artisan Ales has locations in Ann Arbor, Detroit and Dexter. (photo by Tony Demin)

It’s been just 12 years since Jolly Pumpkin opened its doors in Dexter. But the brewery’s success has multiplied since 2004 with additional taprooms in Ann Arbor, Detroit and Traverse City.

“We really made a name for ourselves with our sours,” says co-owner Mike Hall. “We use a naturally occurring yeast from our original Dexter facility in all of our beers. Beer geeks just love our sours.”

Like most craft brewers, Jolly Pumpkin reserves small-batch and seasonal beers for its taprooms. But the brewer goes even further, promising beers specific to each location.

“We don’t offer any live music or entertainment,” says Hall. “Old Mission Peninsula is the attraction up here. You can sit on the porch with a beer, listen to the Lake

Michigan surf and look up at the stars. That’s really all the entertainment you need.” 13512 Peninsula Dr., Traverse City, Michigan 49686, 231/223-4333 (visit website for information on other locations), jollypumpkin.com

“We don’t do flashy or trendy,” says Amy Abbott, director of marketing and retail operations. “We adhere to making what we like to drink.”

Motor City’s most well-known and popular beer is Ghettoblaster, a session English-style mild. Other favorites include Motown Bohemian Lager, the brewery’s lightest, and Motor City IPA, with a hop profile that’s more toned-down than the extreme-IPA trend.

Motor City’s taproom occupies Detroit’s Midtown, a neighborhood that has leapt from ho-hum to hopping since Detroit’s urban renaissance. The brainchild of artist and owner John Linardos, the taproom captivates with original art, including metal work, a U-shaped poured-concrete bar (to facilitate conversation) and mosaic tiles.

In winter, New Holland Brewing Co. benefits from downtown Holland’s heated, snow-free sidewalks. During the spring, it sees visitors who flock to town to check out the city’s famous tulips, and for summer crowds, it’s just a short drive from Lake Michigan beaches.

New Holland’s pub brewer Steve “Bert” Berthel admits that the brewery’s location offers plenty of appeal, but he thinks there’s more to New Holland’s popularity. “The biggest thing that sets New Holland apart is a commitment to quality and consistency,” he says.

That includes the sourcing of local ingredients, not only for the pub’s food menu but also for its drinks. “Here at the pub, I am at almost 100 percent Michigan hops and barley in all of my beers,” Berthel says.

A diverse lineup of beers assures that all patrons can find one they like. New Holland’s mainstays of Mad Hatter IPA, The Poet oatmeal stout and Sundog amber ale are joined by a long list of choices ranging from oak barrel-aged to sours, Belgians to fruit beers.

Aaron Morse isn’t bound by convention. The owner of Dark Horse Brewing Co. has worked outside the box since 1997.

“Our beers do not follow style guidelines,” explains Morse. “Our beers are full bodied and full of flavor. They break out of the styles and guidelines. Hell, we even come up with our own styles occasionally.”

Morse encourages beer lovers to visit Dark Horse in person to sample experimental and one-off beers available nowhere else. Visitors buy beer by the glass at the taproom or packaged at the General Store, Dark Horse’s on-site purveyor of beverages and home-brew supplies that doubles as a skateboard shop.

Numerous brewery events keep the public engaged at Dark Horse, many of them as unconventional as the brewmaster’s recipes: a Louisiana crawfish boil; a Chicken Wing Thing; an employee beer competition (with the winner’s brew on tap for a year); and an Elf party in December featuring the release of bourbon barrel-aged Imperial Stout.

German brewing made its mark on Detroit 150 years ago thanks to the Stroh family. Stroh’s shut down in 1985, but Atwater Brewery opened a little more than a decade later to make things right.

“The main reason for the facility in 1997 was to bring back the German-style Bohemian lager the Strohs made,” explains owner Mark Rieth, who bought Atwater Brewery in 2005.

Atwater succeeds in producing quality beers — Rieth imported a German brewing system to make sure they got it right — but the craft brewer’s attention to German gemütlichkeit doesn’t end with the beer. Atwater’s Grosse Pointe location, its second, includes a Bavarian-style biergarten.

An outdoor bar serves Atwater’s lagers, as well as traditional German foods such as a daily schnitzel, sausages and a German pizza loaded with bratwurst, sauerkraut and crispy onions. The biergarten’s seating features communal tables imported from Munich.

Atwater’s biergarten has proven so popular the craft brewer plans to open a second one this summer in downtown Grand Rapids.

There’s only one place to find Detroit Beer Co. beers: at their brewpub in downtown Detroit.

“We make 80 to 90 batches of beer per year,” says owner Drew Ciora, “and over half of those are one-time-only batches.”

Set a block off Woodward Avenue, the Detroit Beer Co. has become a popular pre- and post-event dinner stop, lying within an easy walk of Ford Field, Comerica Park, the theater district and Detroit’s revitalized downtown. A new Red Wings arena slated for 2017 will offer one more neighborhood attraction.

The brewpub’s architecture hearkens back to an older Detroit. The stately 1902 Hartz Building was fully renovated for the Detroit Beer Co. in 2003. But original features like hardwood floors, tin ceilings and exposed brick walls remain, adding warmth and charm to the place. Behind the bar you’ll see, hear and smell brewers hard at work making more beer. Belgian dark strong ale and a German Altbier are among the unusual choices on tap these days.