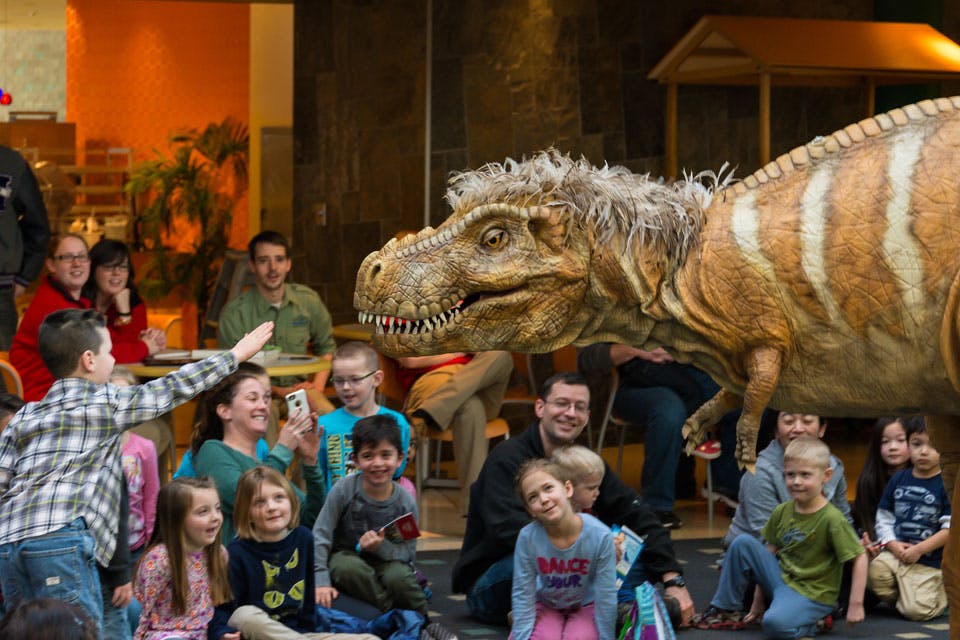 As our neighbor celebrates its bicentennial, here are four attractions to put on your travel itinerary.

Indiana was once covered by a warm, tropical sea brimming with life — an ancient past that can be seen today in 386-million-year-old fossil beds along the Ohio River. Skeletal remains of corals, sponges, echinoderms, brachiopods, mollusks, arthropods and microscopic organisms visible in the limestone rock indicate the types of species that lived here before humans.

The fossil beds are part of the Falls of the Ohio State Park, a 165-acre preserve located in Clarksville, Indiana, along the banks of the Ohio River. In 1980, Indiana and Kentucky worked together to preserve the site, which is considered one of the largest exposed layers of fossil-rich Devonian limestone in the world. After being closed during 2015 for a $6 million renovation project, the park’s interpretive center reopened earlier this year with new interactive exhibits.

“We wanted to make it more inviting for our younger crowd as well as more engaging for our older crowd,” says property manager Lucas Green.

The interpretive center transports visitors to the Devonian Sea and through the Ice Age, while also teaching them about the Native Americans who called the area home, before ending with the Lewis and Clark expedition, which had its beginnings here. A film at the Lewis and Clark Theater offers a panoramic depiction of Meriwether Lewis and William Clark’s cross-country journey.

It’s impossible to miss the curious brachiosaurus standing five stories tall and poking his head through the roof. The whimsical touch gracing the exterior of the Children’s Museum of Indianapolis offers a preview of what guests can expect to find inside.

Covering nearly 500,000 square feet, it is the nation’s largest children’s museum, with more than 120,000 items in its collection and 1.25 million visitors a year. But it is much more than a play land for youngsters. The museum is designed to engage its grown-up visitors as well.

Hands-on activities and costumed actors bring stories to life in exhibits ranging from “Beyond Spaceship Earth,” an immersive experience depicting space exploration, to the semi-permanent exhibition “Take Me There: China,” which is one of the biggest displays focused on modern-day China ever produced in the United States. A new traveling exhibition aimed at younger children arrives in August. It features the animated Disney character Doc McStuffins, who helps demystify what it’s like to go to the doctor.

Nearly half a million visitors from Indiana, Michigan and Ohio converge on Fort Wayne each summer for the Three Rivers Festival. Hosted at Headwaters Park since the 1980s, the festival has grown to be the second largest in the state. And, if you’ve never been to Fort Wayne, you’re exactly who organizers hope to reach.

“We try to find ways to involve people who are new to Fort Wayne,” says festival executive director Jack Hammer, “so they see the great reasons to come down and be a part of the festival.”

This year’s festival runs July 8 through 16 and features a full lineup of art, concessions and live entertainment during its nine-day run. One of the big draws is the annual parade, which will honor Indiana’s bicentennial as well as the festival’s 48th year with more than 100 floats centered on the theme “Celebrate the Past, Ignite the Future.” As many as 60,000 parade-goers are expected to line the route to cheer on Hoosier creativity and the youth marching bands that take part.

There’s also a Raft Race, where paddlers pilot homemade and rented rafts; a Waiter-Waitress Olympics, during which three-person teams race through a simulated dining room; and a Bed Race that is one of the festival’s must-see events.

Finally, the party caters to rumbling stomachs with more than 30 food vendors stationed on Junk Food Alley with plenty of hot and cold eats, as well as a few surprises that will keep you on your toes. “You can have anything,” says Hammer, “from your basic fair food of an elephant ear down to chicken feet.” Headwaters Park, downtown Fort Wayne, Indiana 46802, threeriversfestival.org

Spirit of the State

Johnny Appleseed’s drinking flask, Mario Andretti’s Indianapolis 500 fire suit and the Indiana State Prison’s decommissioned electric chair don’t seem to have much in common at face value. But as part of “Indiana in 200 Objects,” they offer a fascinating window into the history of our nation’s 19th state.

The exhibition was assembled in honor of Indiana’s 2016 bicentennial and occupies a 7,500-square-foot gallery at the Indiana State Museum, where it will remain on display through Jan. 29.

“It’s not just a textbook approach to Indiana history,” says Dale Ogden, the museum’s chief curator of cultural history. “Individually the stories are interesting, but when you take them all together, you end up with a really sweeping and interesting overview of the state.”

The National Archives, Rolls-Royce, the Children’s Museum of Indianapolis and Purdue University are just a few of the 40 organizations that have contributed items. Other artifacts on display include pilot and former Purdue professor Amelia Earhart’s flight jacket, a manuscript of Indiana born-and-raised author John Green’s A Fault in Our Stars, and a copy of the Emancipation Proclamation signed by Abraham Lincoln, who resided in the state for 14 years.