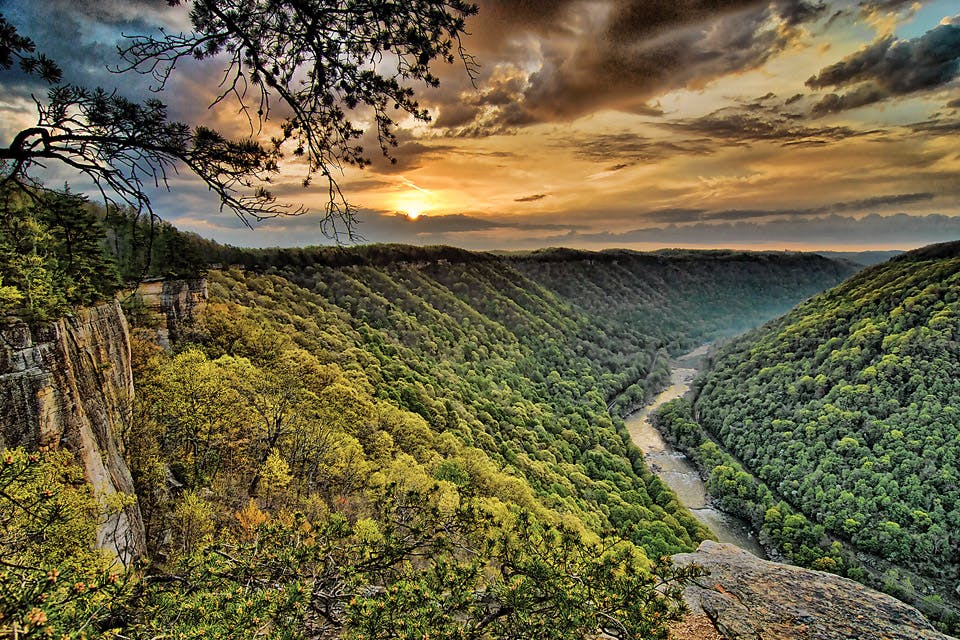 From outdoor excursions to historic sites, the Mountain State is filled with entertaining options, no matter what region you’re exploring.

Endless Wall Trail in New River Gorge National River: The 2.4-mile, easy-to-moderate trail is named after the cliffline that offers hikers a bird’s-eye view of the New River Gorge National River 900 feet below. Groves of hickory and Virginia pine add ambiance to the vista dotted with hawks and songbirds winging their way through the gorge. The trail’s Diamond Point Overlook provides dazzling views of the Allegheny Plateau, and spring hikers get the added treat of seeing the gorge filled with wildflowers and other lush vegetation. “Spring is an amazing time to visit, especially when the rhododendron and mountain laurel shrubs are blooming,” says National Park Service ranger Jodi French-Burr. “The foliage is so dense it seems to form a tunnel.” 162 Fayette Mine Rd., Lansing 25862, 304/574-2115, nps.gov/neri

Summersville Lake: The U.S. Army Corps of Engineers created the 2,790-acre Summersville Lake, the largest body of water in West Virginia, in the 1960s. Today, more than 1 million outdoor enthusiasts visit to swim, waterski and boat, while anglers can try their hand at reeling in bass, walleye, catfish and trout. Since the clear-water lake has a visibility of up to 65 feet below the surface and a summer temperature ranging from 60 to 80 degrees, it’s also become a favorite place for scuba diving. “It’s easy to see why Summersville Lake has earned the nickname, ‘the Little Bahamas of the East,’ ” says Linda Sproles, assistant director of the Summersville Area Convention and Visitors Bureau. 1706 Airport Rd., Summersville 26651, 304/872-3722, summersvillecvb.com

New River Gorge Bridge Walk: Over the last seven years, 39,590 visitors from all 50 states and 62 countries have traveled to Lansing to test their mettle by traversing the 24-inch-wide, 3,030-foot-long catwalk underneath the bridge that leads across the New River 876 feet below them. Each adventurer wears a harness that’s hooked into a safety line and handrails offer additional support. The striking 360-degree view makes the journey like no other, says Jeanette Shelton, Bridge Walk office manager. “People walk the bridge for different reasons,” she says. “Some want to experience the beauty of the gorge. Others just have it on their bucket list to conquer their fear of heights.” 57 Fayette Mine Rd., Lansing 25862, 304/574-1300, bridgewalk.com 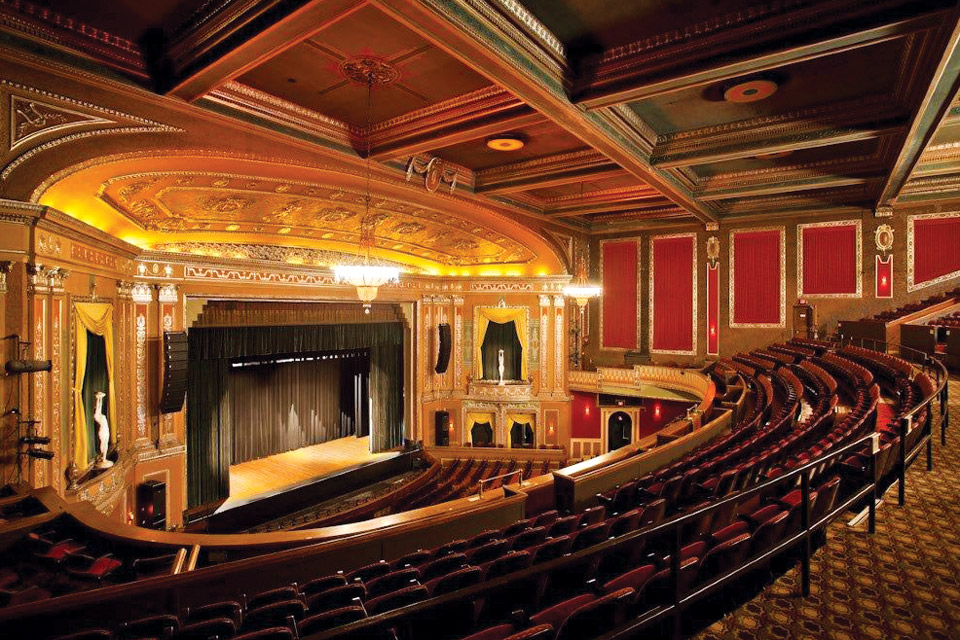 Wheeling
This city along the Ohio River has grown into a popular entertainment destination for gaming, arts and craft beer.

Wheeling Island Hotel Casino Racetrack: Just a five-minute drive from downtown, Wheeling Island Hotel Casino Racetrack is known for slot machines, table games and greyhound racing, as well as a host of options for dining, drinks and overnight accommodations. Classic-rock tribute bands, which play hits by the Eagles, Bee Gees and Beatles, perform twice a month in the casino’s 1,000-seat auditorium. The smorgasbord of dining options includes The Pointe Sea & Steak, which offers surf-and-turf entrees, and an all-you-can-eat buffet. “We are surrounded by the Ohio River, but the ambiance offers a very modern island experience,” says president and general manager Kim Florence. “It’s like being at a resort.” 1 S. Stone St., Wheeling 26003, 304/232-5050, wheelingisland.com

Wheeling Brewing Co.: With beers ranging from Panhandle Pale Ale — known for its sweet honey-toasted malt flavor — to Nail City Porter, with notes of barley and chocolate, and a menu that includes kimchi boats and locally made pierogies, Wheeling Brewing Co. is the perfect spot to partake of cold beer or a farm-to-table meal. The red brick walls, along with a smattering of antiques, add to the laid-back atmosphere. “We all grew up here, we all love the area … so that was the avenue we wanted to go with,” say co-owner Jimmy Schulte, who opened the brewpub with three business partners in 2014. “Our place is fairly small and intimate. You don’t have to worry about us not seeing you or being able to interact.” 2247 Market St., Wheeling 26003, 304/905-8757, wheelingbrewing.com

Capitol Theatre: Since it opened in 1928, The Capitol Theatre has been providing entertainment ranging from silent movies in the ’20s to 21st-century Broadway touring shows. In 2007, civic leaders spearheaded a restoration project that included refurbishing the rich red, green and gold interior and art deco marquee. “The Capitol was conceived and built by Wheeling industrialists who wanted to bring the excitement of theatrical entertainment to our city,” says Frank O’Brien, executive director of the Wheeling-Ohio County Convention and Visitors Bureau, the organization that owns the theater. “This theater became the soul of the community, and it’s important for us to keep that enthusiasm alive today.” 1015 Main St., Wheeling 26003, 304/233-4470, capitoltheatrewheeling.com 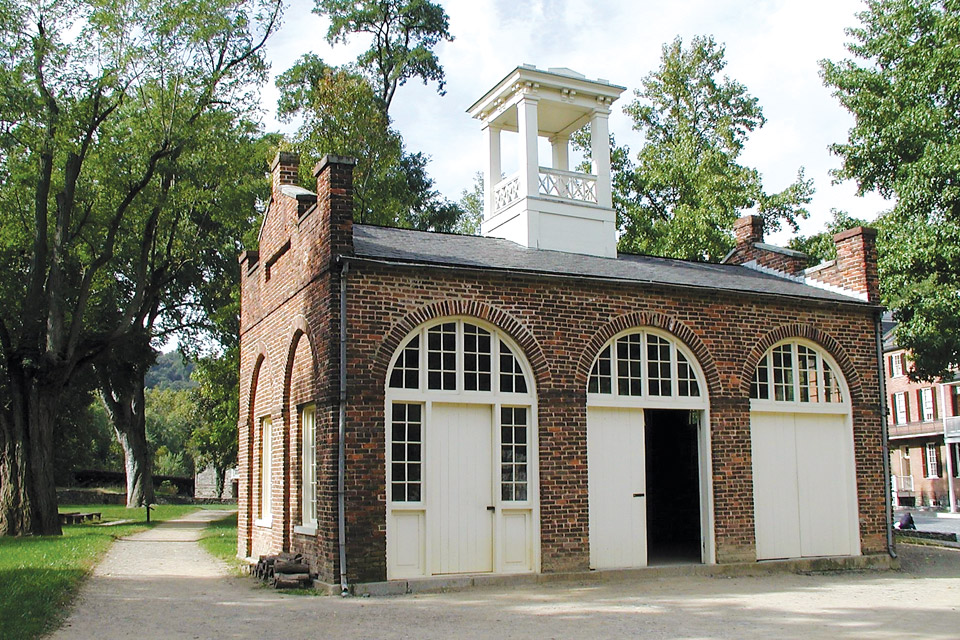 The Eastern Panhandle
Bordering Virginia and Maryland in the far northeast portion of the state, this region is filled with places that bring history to life.

Jefferson County Museum: Native American pottery and Civil War uniforms are just a sampling of the more than 2,200 artifacts at the Jefferson County Museum in Charles Town. “Visitors would be surprised to see some of the history here,” says museum curator Sarah Huston, citing a letter penned by George Washington in 1799. The former president wrote the missive to his nephew after the death of Washington’s younger brother, Charles, who founded Charles Town in 1786. Other focal points include the original wagon that carried John Brown to his 1859 execution following his raid on the federal arsenal at Harpers Ferry. “Much of what happened here in Charles Town is a reflection of the history of our country,” adds Huston. 200 E. Washington St., Charles Town 25414, 304/725-8628, jeffcomuseumwv.org

John Brown’s Fort: Located in the 4,000-acre Harpers Ferry National Historical Park, this unassuming brick building was the site of the insurrection that helped spark the Civil War. It was there, on Oct. 16, 1859, that abolitionist John Brown attempted to lead a slave rebellion by raiding the arsenal next door and taking control of 100,000 federal weapons before being captured 36 hours later. The only surviving building of the original armory complex Brown raided, the fort remains an iconic historical landmark: Abraham Lincoln visited in 1862, as did Jimmy Carter in the 1970s and Bill Clinton two decades later. Visitors are invited to tour the structure, which today contains a pair of firehose carts from the 1880s and reproductions of pre-Civil War weapons boxes. “So many aspects of history happened here,” says Harpers Ferry Historical Park guide Jeff Bowers. “The place means different things to different people.” 171 Shoreline Dr., Harpers Ferry 25425, 304/535-6298, nps.gov/hafe

Martinsburg Roundhouse: The Martinsburg Roundhouse serves as a time capsule of West Virginia railroading in the aftermath of the Civil War. A major hub of the Baltimore & Ohio Railroad from 1866 to the 1940s, the structure was used as an inspection station and service bay for B&O engines. Exhibits include the 50-foot-round turntable used to rotate engines toward their next destination, firehoses from the 1880s, a 1913 freight car and 1929 caboose. “Although other modes of transportation came after the railroad, without trains there’d be no spirit of adventure,” says Michael Giovannelli, director of visitor services at the Roundhouse. 100 Liberty St., Martinsburg 25401, 304/264-8801, martinsburgroundhouse.com