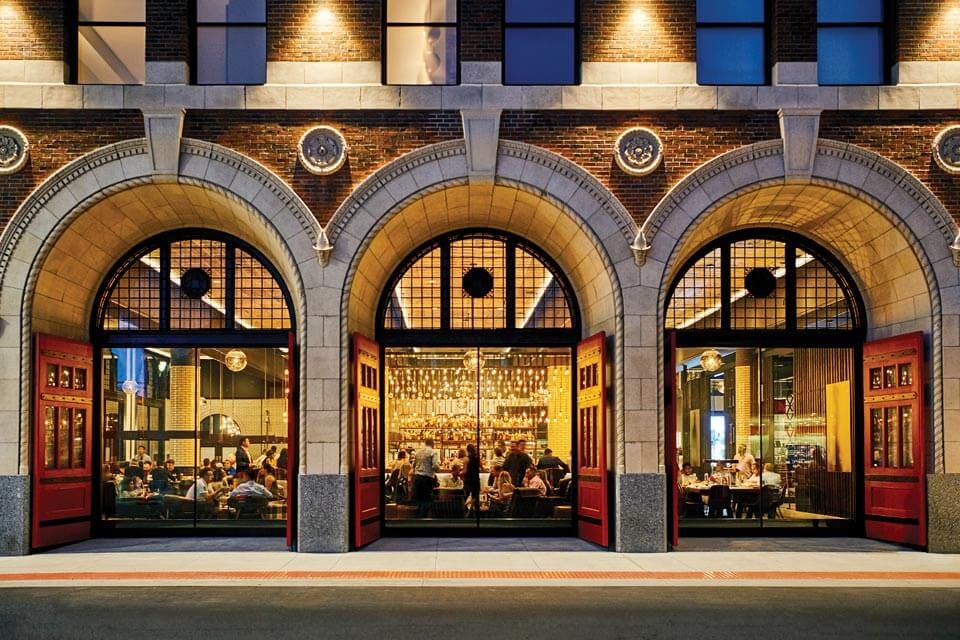 Check out the Motor City’s renaissance while staying at one of these properties that merge history with high-end amenities.

A stay at the Detroit Foundation Hotel is akin to spending quality time in an art gallery, but that creative energy isn’t limited only to what adorns the walls.

“[Many things] from the furniture — made from repurposed materials found throughout the city — to the light fixtures, paintings and the spirits served in the bar are sourced [locally],” says Bob Lambert, the hotel’s general manager.

That local ambiance isn’t the only reason guests feel at home though. The hotel’s on-site restaurant, The Apparatus Room, features meticulously crafted and beautifully plated entrees using locally sourced meats and produce, including a lamb dish that Lambert says has made the restaurant a Motor City destination.

“We’re at the forefront of what is to come for this city, and that is very high-end food and beverage,” he says. “We have the highest-rated chef in the state.”

To get the full experience, he recommends the Chef’s Choice, prepared by the restaurant’s two-star Michelin chef, Thomas Lents.

Nearby Find: RiverWalk: Like many aspects of Detroit, the city’s riverfront is undergoing a transformation. RiverWalk currently runs 3 1/2 miles along the Detroit River, and although it isn’t finished yet, the goal is to connect the east and west sides of the riverfront with an additional 2 miles of paved walkway. On the east riverfront (about a 10-minute walk from the Detroit Foundation Hotel) Rivard Plaza serves as the main gathering spot, with a carousel, cafe and playground. 1340 Atwater St., Detroit, Michigan 48207, detroitriverfront.org 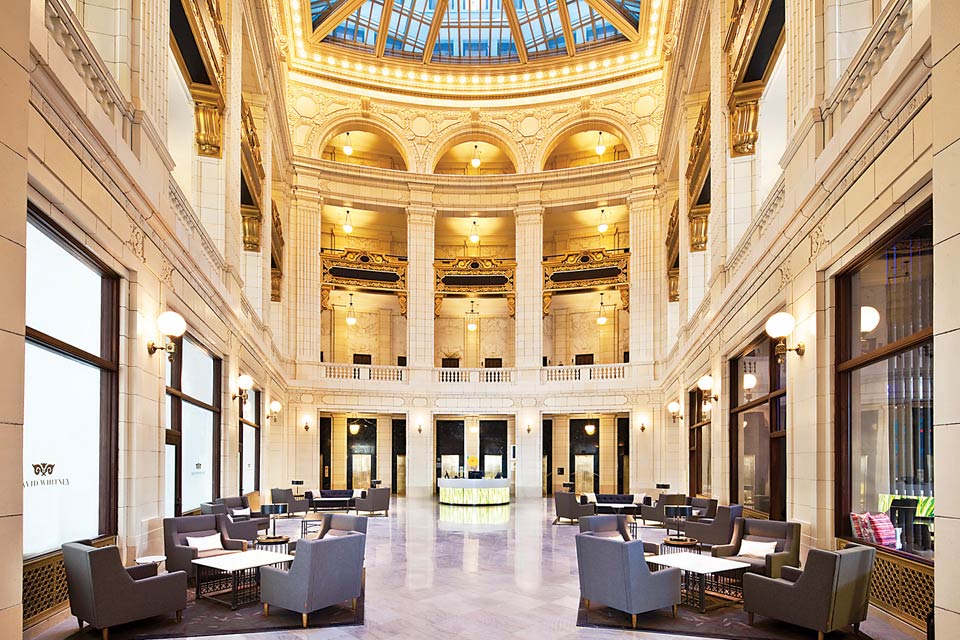 Aloft Detroit at The David Whitney

Since 1915, the David Whitney Building, with its opulent gold leafing and four-story atrium, has been a revered city landmark. Today, those touches serve as the gateway to Aloft Detroit. The 136-room hotel, which opened inside the David Whitney Building in 2014, boasts modern furnishings and amenities that start at the door: Guests can enjoy mobile check-in and keyless room entry by using Aloft’s app-based entry services.

“We’re at the forefront of [the hotel industry], despite being in a 103-year-old building,” says Harold Getting, vice president of sales and operations for Florida-based VOS Hospitality, which owns the David Whitney Building. “In a few years, you’ll see all hotels using keyless technology like this.”

The hotel is also forward-thinking in terms of its inclusivity: Pets are welcome, and the staff will gladly provide dog beds and bowls for your four-legged travelers.

Located in Detroit’s entertainment district, the hotel is, on average, a three-minute walk from the Fox Theater, Comerica Park and Ford Field, and it’s close to the Greektown and MGM Grand casinos. But guests don’t have to venture out. The hotel’s WXYZ Bar brings in local DJs Tuesday, Friday and Saturday nights. 1 Park Ave., Detroit, Michigan 48226, 313/237-1700, aloftdetroit.com

Nearby Find: Comerica Park: The home of the Detroit Tigers, Comerica Park is a baseball stadium, carnival and museum rolled into one. In the concourse behind first base, visitors find a carousel adorned with tigers and fans eagerly line up to get a seat on the Fly Ball Ferris Wheel behind third base. Although the rides only operate during games, the concourse and parts of the field are open for public tours on summer Tuesdays and Fridays. They include stops in the dugout and Tigers Walk of Fame, which features memorabilia from the 1800s to present day. 2100 Woodward Ave., Detroit, Michigan 48201, 313/962-4000, tigers.com 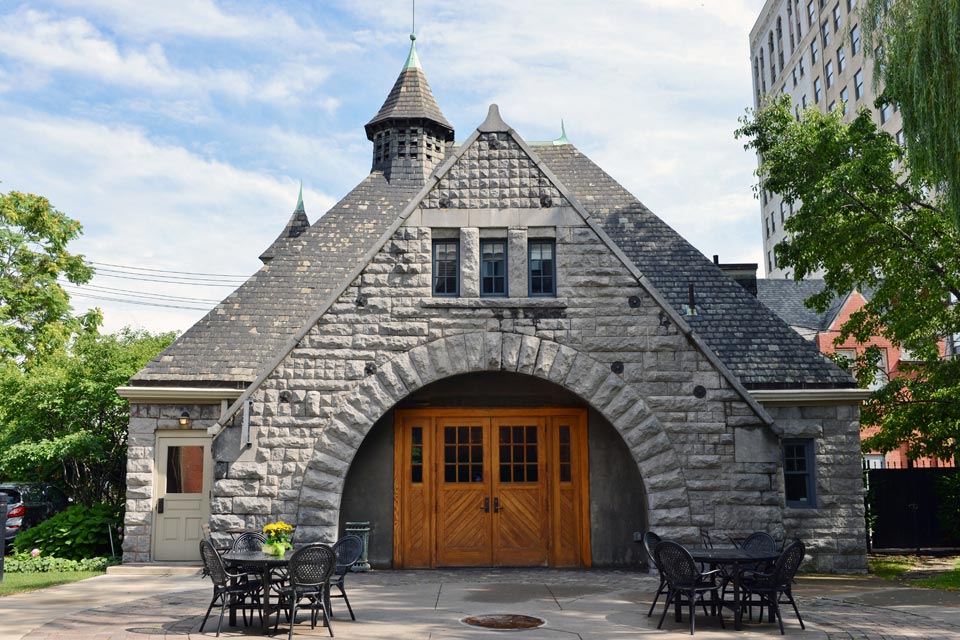 The Inn on Ferry Street

Comprised of what were once four mansions and two carriage houses built in the late 1800s, The Inn on Ferry Street has been restored to honor its Victorian splendor in thoroughly modern ways.

The inn consists of 40 rooms spread across the six houses, each with its own parlor. The Roehm House, which once belonged to the owner of the Detroit Carriage Co., includes a library and music collection guests are free to peruse, while the Owen House, originally the home of a dry goods store owner, boasts a baby grand piano in the parlor.

But, Mosey adds, what truly makes stays special is the attention to detail, right down to the locally baked sea-salt-chocolate-chunk cookies guests receive when they arrive. A continental breakfast buffet served in the Scott House features quiche, fresh fruit, pastries and waffles made on request.

“It’s a much more relaxed, quaint and homey atmosphere than a normal hotel,” says Holly Cheslock, the inn’s assistant manager. “I hear from guests all the time how comfortable they feel here.” 84 E. Ferry St., Detroit, Michigan 48202, 313/871-6000, innonferrystreet.com

Nearby Find: Detroit Institute of Arts: The Detroit Institute of Arts spans more than 100 galleries. On exhibit through Sept. 30, “Star Wars and The Power of Costume” features 60 screen-worn original costumes and designs from the first seven films. “Play Ball! Baseball at the DIA,” on display through Sept. 16, pays homage to the Detroit Tiger’s 1968 World Series victory against the St. Louis Cardinals. 5200 Woodward Ave., Detroit, Michigan 48202, 313/833-7900, dia.org 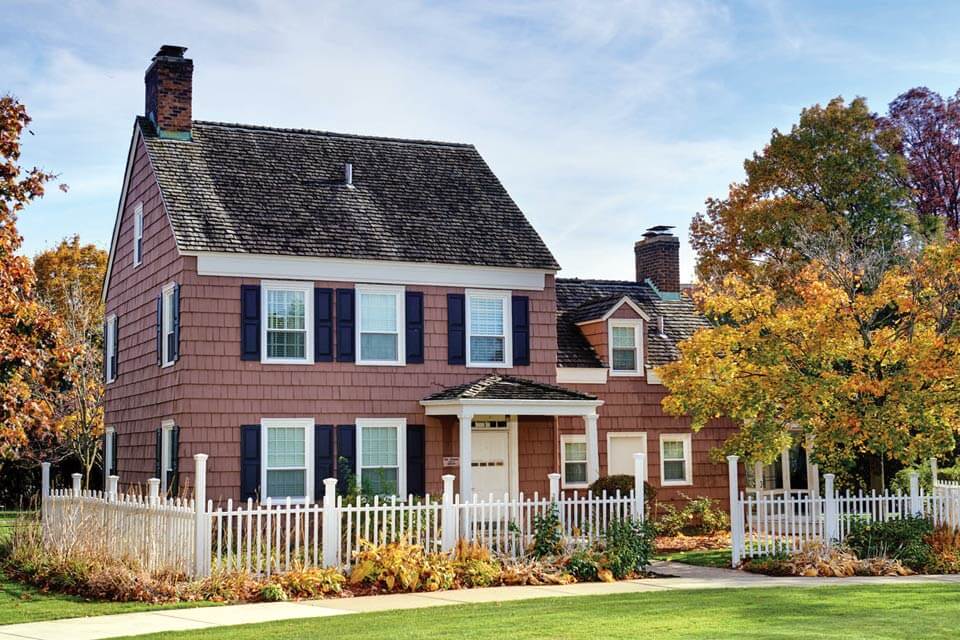 Like many of Henry Ford’s ventures, The Dearborn Inn is known for leading the way in innovation. Built by Detroit architect Albert Kahn and listed on the National Register of Historic Places, it has the distinction of being one of the first inns in Michigan to have air conditioning.

“Shortly after the inn opened in 1931, there are recorded stories of local Detroiters waiting in line at the entrance to check in during hot summer days because they didn’t have air conditioning in their homes,” says general manager Bob Pierce.

That focus on technology continues at the inn, which is now part of Marriott Hotels. The Dearborn Inn’s campus, which includes the main inn, five colonial guesthouses, two lodges and a large outdoor pool, was recently rewired so guests can enjoy faster Wi-Fi service along with 55-inch, flat-screen TVs and HD channel lineups in every room. The guesthouses were built to honor the contributions of famous Americans including Civil War Unionist Barbara Fritchie and writer Walt Whitman. 20301 Oakwood Blvd., Dearborn, Michigan 48124, 313/271-2700, dearborninnmarriott.com

Nearby Find: Henry Ford Museum of American Innovation: The Henry Ford Museum of American Innovation honors the spirit of invention. Through Sept. 3, “The World of Charles and Ray Eames” showcases their most influential works, ranging from films to furniture to architectural design. The ongoing exhibition “Heroes of the Sky” highlights aviation pioneers and aircraft from the first half of the 20th century. 20900 Oakwood Blvd., Dearborn, Michigan 48124, 313/982-6001, thehenryford.org