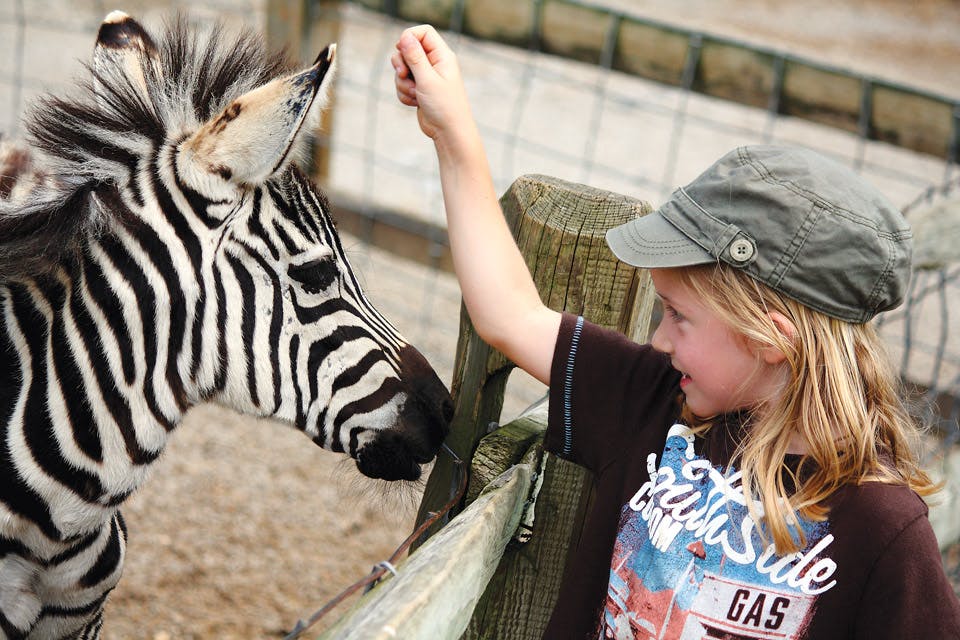 While growing up in Connoquenessing, Pennsylvania, Tom Guiher loved caring for the chickens, ducks and turkeys on his family’s farm. In 1992, Guiher founded Living Treasures Wild Animal Park in New Castle, Pennsylvania, to share that fondness with the public.

Six years later, he opened a second park in Jones Mills. Each offers visitors the chance to get up close and personal with a friendly menagerie that includes kangaroos, goats, lambs and the amiable peacocks wandering the grounds. But the true attention-getters are the docile camels residing at the New Castle park available for rides, and the Sloth Encounter at Jones Mills, starring 1-year-old Padawan, who loves nothing more than to be petted and fed by visitors. 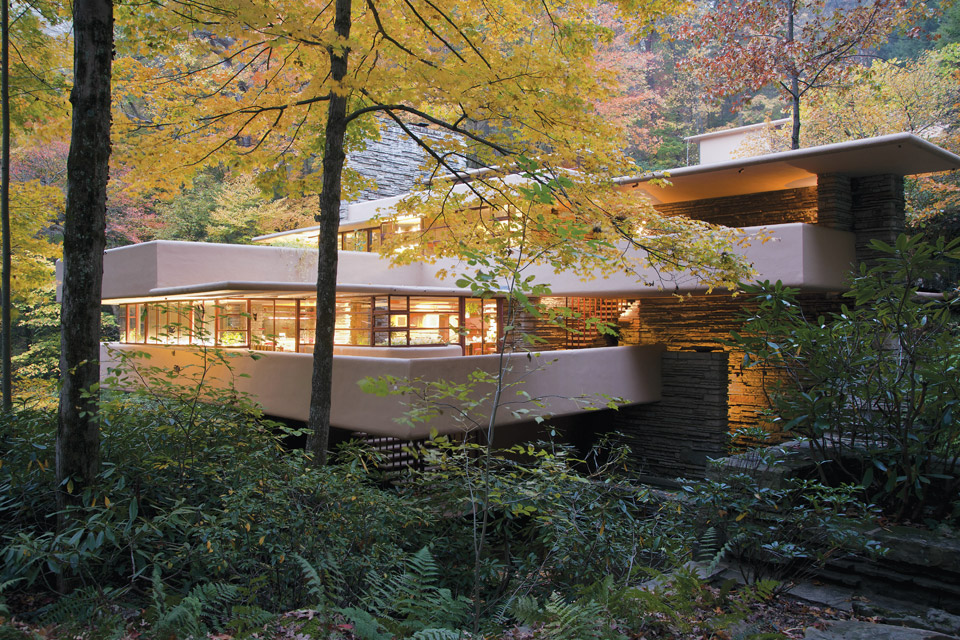 At Home with Nature

Heralded as a marvel when it was designed in 1935, Fallingwater serves as architect Frank Lloyd Wright’s ode to nature’s brilliance. Perched over a 20-foot waterfall cascading into Bear Run and commissioned by department store magnate Edgar J. Kaufmann Sr., the 5,300-square-foot home and 1,700-square-foot guesthouse symbolize Wright’s commitment to integrating humans, architecture and nature.

Focal points include the fireplace hearth Wright built around a boulder found on the 5,200-acre estate and a pair of cantilevered terraces suspended 22 feet out over the stream. Wright fashioned the buildings and furniture in his organic style of architecture and with the natural palette of materials he favored. Constructed of stone, glass and steel, the dwellings feature built-in furnishings made of black walnut.

Fallingwater welcomes 170,000 visitors each year who come for tours and to participate in adult education classes. On Sept. 7, the estate will serve as the setting for Fallingwater Soiree, featuring wine, appetizers, a performance by members of the Pittsburgh Symphony Orchestra and breathtaking views of sunset.

“Like nowhere else, Fallingwater connects us to nature through art and design,” says Fallingwater’s director Justin Gunther. “It’s a romantic transformative place that puts us in touch with the innate sense of nature we all share.” 1491 Mill Run Rd., Mill Run, Pennsylvania 15464, 724/329-8501, fallingwater.org

Some like them glazed or topped with sprinkles. Others insist on cream-filled or just plain cake. No matter their pleasure, doughnut connoisseurs are sure to please their palates at the Donut Daze festival, June 7 and 8 in New Wilmington.

Launched in 2016 to celebrate National Doughnut Day and the more than two-dozen independently owned-and-operated doughnut shops within a one-hour radius, the event attracts 400 visitors a year. The fun begins on Friday with the Donut Crawl, where 15 doughnut-makers share their specialty variety (with no two shops offering the same kind). Ticket prices range from the Creep ($15 for doughnuts from five vendors) to the Crawl ($25 for 10 doughnuts) to the Coma ($35 for doughnuts from all 15 vendors).

Saturday offers plenty of opportunities to work that indulgence off, too. Tour de Donut, a bike excursion offering four possible routes for cyclists of all skill levels — and periodic stops for a doughnut-eating challenge — begins at 8 a.m. 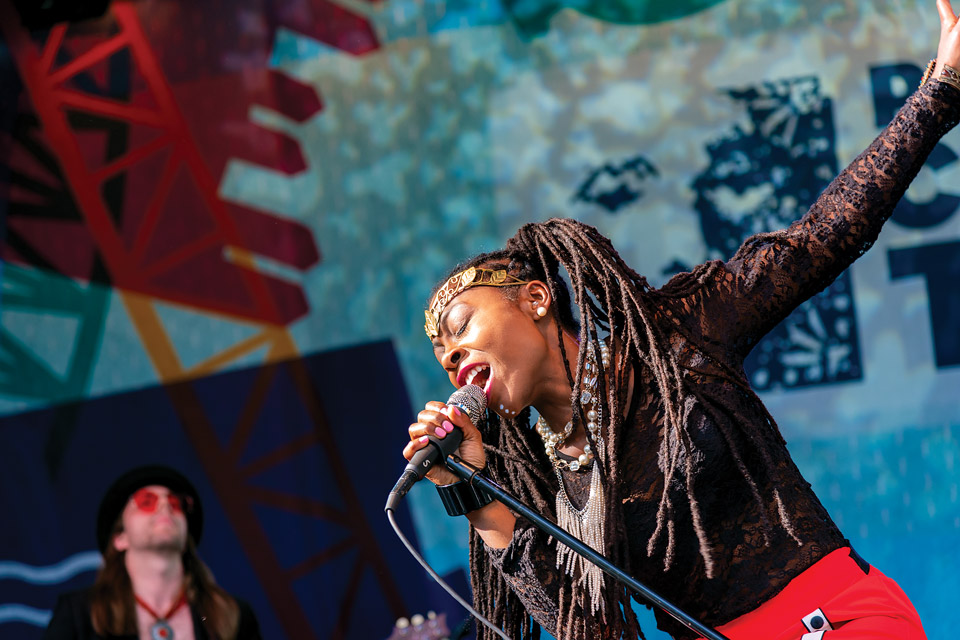 What began 60 summers ago as a weekend created to move art beyond museum walls has blossomed into the Dollar Bank Three Rivers Arts Festival, a 10-day free outdoor event held in downtown Pittsburgh that draws more than half a million people each year.

Point State Park will showcase “Los Trompos” (spinning tops), a colorful array of sculptures by Mexican artists Héctor Esrawe and Ignacio Cadena that double as seating spaces. Next door, Gateway Center will be filled with Kenya-based Ocean Sole Africa’s sculptures crafted from flip-flops found in and around the Indian Ocean.

Inspired by the art of paper folding, Compagnie Furinkaï will present “Origami,” a fusion of public art in the shape of a 40-foot shipping container and gravity-defying dance moves.

“The festival has become part of the fabric of summer in Pittsburgh,” says festival director Sarah Aziz. “The city is a great sports town, but it’s a great arts town, too.” Point State Park, downtown Pittsburgh, Pennsylvania 15222, 412/456-6666, traf.trustarts.org

Whether it’s a chrome bar with pink stools and a “Happy Days” vibe, beach glass jewelry or props fit for feature films, you’re bound to find something wonderfully vintage in Butler County, Pennsylvania.

Mystique Moon Antiques & Artisans is filled with shabby-chic decor as well as an eclectic mix of wares created by 49 regional artisans. The Perfect Piece Home Furnishings breathes new life into well-loved treasures — including the aforementioned ’50s rec room staple that was quickly snapped up.

Because the region is a mecca for movie shoots, Wagon Wheel Antiques has become a favorite of set designers, who frequently find what they need thanks to the 20 dealers who fill the 6,800-square-foot space. 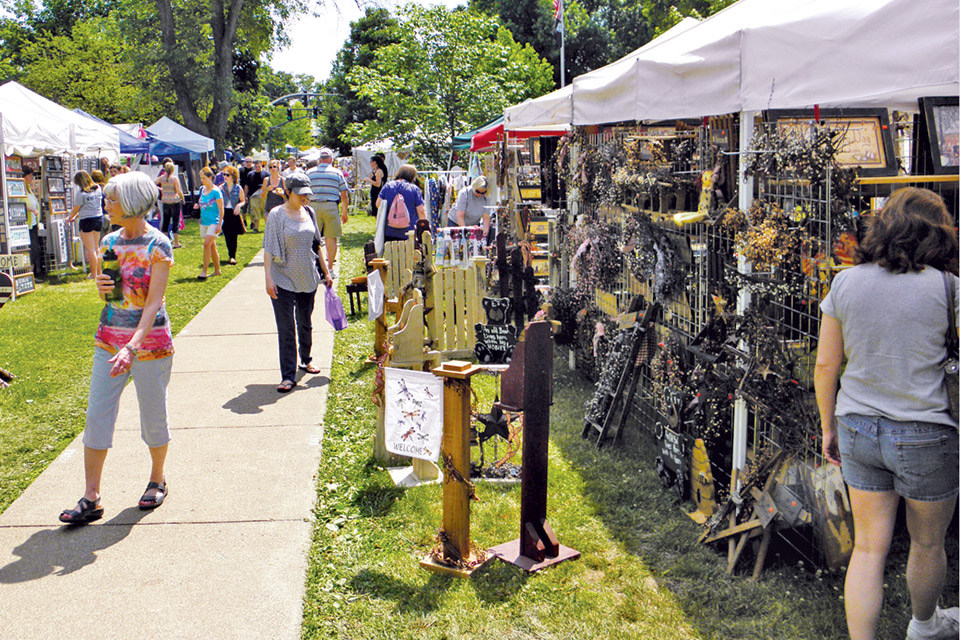 On a blustery day in January 1785, chiefs from the Delaware, Wyandot, Ottawa and Chippewa nations arrived at Fort McIntosh to meet with the Revolutionary War officers stationed there. When the conversation ended, the way had been paved for Congress to enact the Land Ordinance of 1785, which launched the westward migration that continued for 100 years and led to the founding of Beaver, Pennsylvania.

On June 8, the Beaver Area Heritage Foundation will present the 41st annual Garrison Show and Sale, named in honor of the militia stationed at the fort in the late 1700s. Held at Irvine Park downtown, the daylong event features art and antiques shows and more than 275 artisans selling handcrafted items including clothing, jewelry and home decor. The Fort McIntosh Fife and Drum Corps, costumed Revolutionary War re-enactors, will perform period music.

“We don’t realize the sufferings these men had financially and physically to enable our country to be created,” says Beaver Area Heritage Foundation president Mary Anne Peluso. “It’s our responsibility to make sure each generation passes an appreciation for history onto the next.” Irvine Park, corner of state Route 68 and Market Street, Beaver, Pennsylvania 15009, 724/728-3948, beaverheritage.org