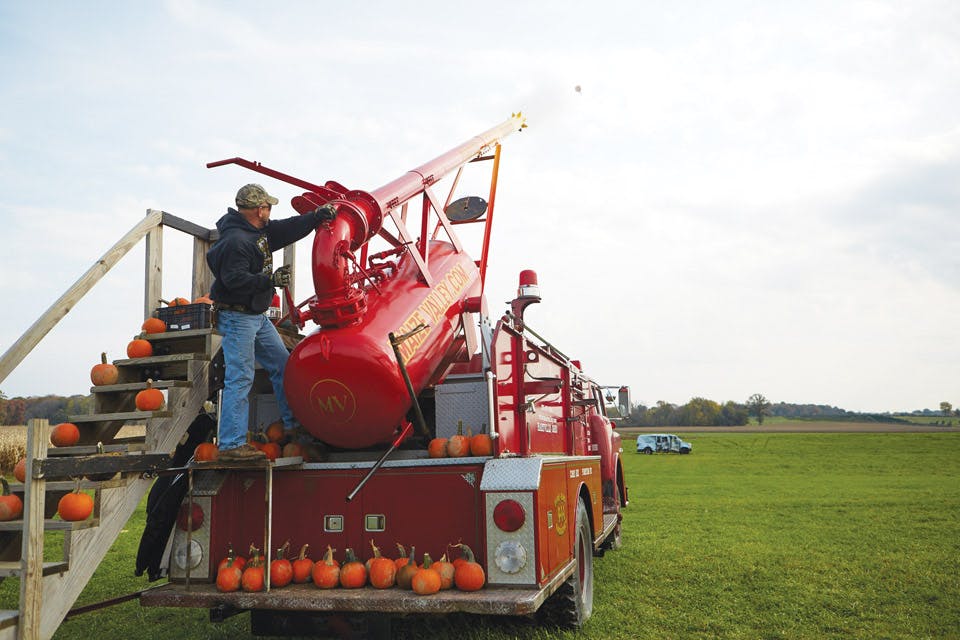 This Stark County winery and craft brewery pulls out all the stops every autumn, with attractions that range from an 8-acre corn maze to a pumpkin cannon.

On a cool October morning, parents make sure their little ones’ coats are zipped and hats are in place before making the walk from the parking area to Maize Valley’s entrance. Once inside, a wagon ferries them up the road toward a cannon that can heave pumpkins up to half a mile. It’s the sort of fun the whole family can agree on.

“Here’s dad ... and he would rather be sitting with his feet propped up, with a big-screen television,” says Bill Bakan, one of Maize Valley’s co-owners. “Instead, he’s here with a beer in his hand, watching pumpkins fly. Life is good.”

Maize Valley operates as a winery and craft brewery throughout the year, but every autumn, the Stark County farm offers a smorgasbord of fall fun, with activities that range from pig races and a straw-bale mountain to the aforementioned cannon and one of the most impressive corn mazes you’re likely to encounter. (Each year, Maize Valley plans the pathways through the 8-acre field so they resemble a recognizable image when seen from the air.) Then there’s Megasaurus, an enormous mechanical monster that has shocked and amazed visitors for the last five years by “eating” junked cars.

Bakan runs the place with his wife, Michelle, and brother-in-law, Todd Vaughn. The family business was founded during the 1960s by Bakan’s father- and mother-in law, Kay and Donna Vaughn. They were originally hog and grain farmers who grew more than 3,000 acres of crops, including sweet corn, soybeans and wheat.

In the mid-1990s, Bakan and his wife opened a seasonal produce stand on-site that also had a corn maze in the fall. By 2000, it was time to expand, so the family purchased a 140-year-old barn adjacent to their property and turned it into a market. “We bought this barn that was on the Internet to be sold for pieces,” Bakan recalls. “It was a total wreck.”

After rehabbing the property, the family found success by selling bakery items and produce at the market, while still hosting fall activities for travelers.

Despite the farm’s location in a dry township, Bakan discovered the Ohio Revised Code allowed for a winery at the farm, but there was a catch: He had to grow all of the ingredients used to make the wine himself. So, the family did just that in 2005, and Bakan says the winery has been one of the biggest hits of the operation with its emphasis on French-American grape hybrids.

“Todd [Vaughn] taught himself how to be a winemaker,” Bakan says.

In 2013, after a change to the Ohio Revised Code, Maize Valley added a brewery. Spearheaded by Todd, the beer-making operation was the first in Ohio to grow its own barley. It’s named 44632 as a nod to the zip code of nearby Hartville. Two years ago, Maize Valley invested in a 15-barrel brew-house system, which allows for the production of 450 to 500 gallons of beer at a time.

“We provide an offering that most people can’t wrap their heads around,” says Bakan. “Wait a minute, you have attractions for children and beer and wine? Yes, we do.” Visit website for fall harvest area days, hours and admission prices; 6193 Edison St. NE, Hartville 44632, 330/877-8344, maizevalley.com