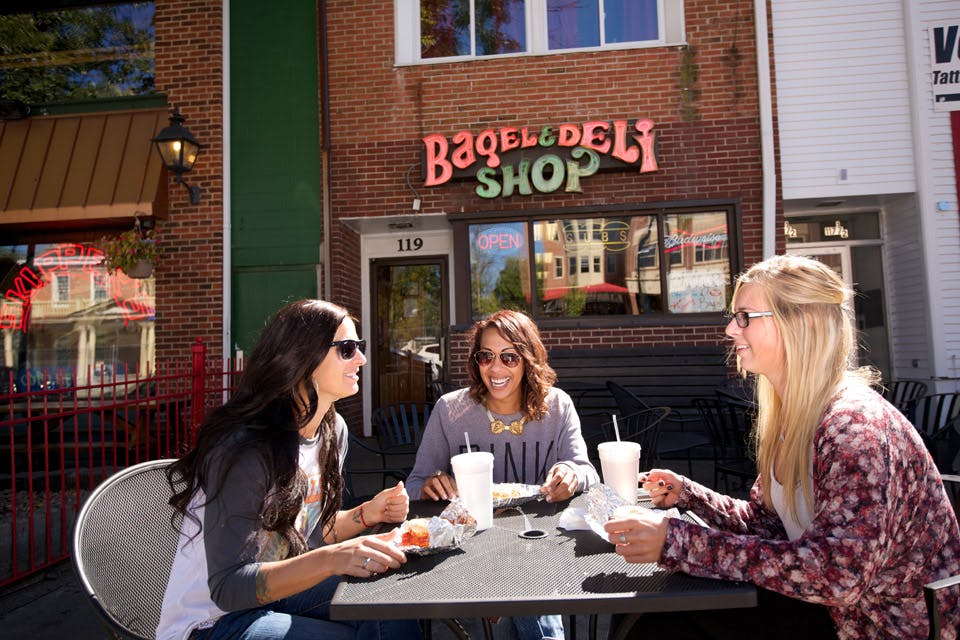 These southwest Ohio destinations cater to a range of ages, tastes and interests.

Miami University students and Oxford residents have been stopping for a bite at Bagel & Deli for more than 40 years, and for good reason. In addition to the permanent menu of 90 sandwiches, this college-town spot offers a chance for gastronomical immortality.

Customers can design their own sandwich by selecting their choice of meat, cheese, vegetables and other toppings, and then add the creation to Bagel & Deli’s lineup for a tryout, with the possibility of it becoming a menu staple.

“It’s a bucket list thing for a lot of people who go to Miami,” says Bagel & Deli owner Gary Franks. “Usually, I’ll put it up for a month or two, and if [employees] don’t have to turn around to look at the ingredients to make it, then it’s got a pretty good shot at making the menu.”

Be forewarned: The odds of becoming a menu fixture are long, but it’s that kind of selectivity that spurs ingenuity. Franks says the most popular sandwich for the past eight years or so has been the Crunch and Munch, the brainchild of an employee a decade ago. It features turkey, smoked cheddar, lettuce, honey mustard, Parmesan peppercorn and Doritos on an everything bagel. “And you get the rest of the bag of Doritos,” Franks adds.119 East High St., Oxford 45056, 513/523-2131, bagelanddeli.com

When the Escape the Room Challenge opened next to West Chester’s Entertrainment Junction last April, it was the first venue of its kind in the state. Today, there are more than 30 such attractions in Ohio and a total of more than 500 across the United States.

“I’ve never seen anything like it,” says Bill Mefford, public relations manager for West Chester’s Escape the Room Challenge. “The growth has just been phenomenal.”

The idea started as a first-person video game, also called “Escape the Room,” before turning into a live-action experience in Japan in 2007. It then spread to Europe before taking root in the U.S. in the past year or so.

Escape the Room’s slogan, “One room. One Hour. One Way Out,” succinctly sums up what to expect: A group of people works together to solve puzzles and problems in order to find a way out of the room.

“A lot of companies like to use it as a team-building exercise,” Mefford says.

The attraction is for adults and teens ages 14 and up. But the neighboring Entetrainment Junction, which owns the Escape the Room Challenge, offers a funhouse and play area for younger kids. 391 Squire Ct., West Chester 45069, 513/759-7666, escapetheroomchallenge.com

You can get dinner and a movie at Cobb Liberty Luxury, a sleek and contemporary nine-screen multiplex in Liberty Township that opened in November. It’s the only theater of its kind in the state, and the menu here goes far beyond just hot dogs and popcorn.

Options range from snacks such as monster nachos or wings to a Cuban sandwich and bacon cheeseburger. By-the-slice pizza options span from veggie to meat lovers to a white-garlic-and-four-cheese pie, while desserts include white chocolate bread pudding and fried Oreos. Even better, the eats can be enjoyed at the on-site Cobbster’s Kitchen & Bar or in the theaters themselves.

“Everything’s fresh and everything’s made from scratch,” says Dennis Stevens, the theater’s general manager. “We want to be a restaurant that happens to show movies.”

Beer, wine and cocktails are available too, and Cobb Liberty Luxury’s movie theaters feature reserved reclining seats. One also offers D-Box technology, in which seats move in synchronization with what’s happening on-screen. For the over-21 crowd, some films are available at the adjoining six-screen CineBistro. It offers full-service dining in the theater prior to the movie and a menu that includes steaks, pastas and other higher-end options. 7514 Bales St., Liberty Twp. 45069, 513/463-0470, cobbtheatres.com

Formerly dotted with paper mills and factories, the city of Hamilton has redefined itself as a haven for the arts. “We are a city of sculptures,” explains Judy Stitsinger, president of the Hamilton Visitors Bureau.

In addition to Pyramid Hill Sculpture Park, which features more than 80 works of art, there are sculptures throughout downtown Hamilton.

Third Street, a freshly paved and newly landscaped thoroughfare will host the Hamilton Flea this month on May 14, which is expected to feature 40 vendors from the region and five food trucks.

“We modeled it after City Flea in Washington Park in Cincinnati,” says Karen Wittmer, the city of Hamilton’s program coordinator for volunteers. “It’s an upscale urban flea market.”

The RiversEdge Amphitheater is also located downtown along the Great Miami River. The venue features live music events throughout the summer, from tribute bands like Back in Black (AC/DC) and Crowded Streets (Dave Matthews Band) to Atlanta-based rockers The Howling Tongues and Cincinnati’s own Lemon Sky. Plus, thanks to a $3.5 million donation from Joe and Sarah Marcum, the land around the amphitheater will be turned into a public park.

There are also three historic areas within walking distance of downtown: German Village with its shopping and historical sites; Rossville, a city of its own that was absorbed into Hamilton and features early 19th-century architecture; and Dayton Lane, a street of homes built by industrialists who made their fortunes in Hamilton at the end of the 19th century. The annual Dayton Lane home tour is set this year for May 22. For more information about downtown Hamilton, visit gettothebc.com/explore/hamilton.

What started as a small roadside stand in Hamilton in 1971 has since grown far beyond selling just fruits and vegetables. Jungle Jim’s International Market in Fairfield has expanded to more than 300,000 square feet to be exact and added a second location in nearby Clermont County.

The quirky culinary destination’s Fairfield location is home to the monorail that once operated at Kings Island. That’s appropriate, because this place isn’t just a store; it’s a food theme park.

“It’s overwhelming,” says Jimmy Bonaminio, marketing director and son of the store’s founder and namesake. “We tell people to give us at least two hours.”

In fact, the store sponsors weekend festivals dedicated to one product, from hot sauce to beer to wine. That’s a necessity since the place has more than 1,500 varieties of hot sauce, 4,000 beer brands and 15,000 wine brands.

“It helps customers parse all the information, and when they shop, they have a lot more tools in their tool belt,” Bonaminio says.

Although the store’s decor is eclectic, there’s a method to the madness.

“We use it to help customers navigate the store,” Bonaminio says, noting that an old fire truck hangs above the hot sauce display and a 90-foot boat identifies the seafood section. “It’s kind of a wonderland,” Bonaminio says. “The kids look up at the displays, and their parents look at the shelves.” 5440 Dixie Hwy., Fairfield 45014, 513/674-6000, junglejims.com