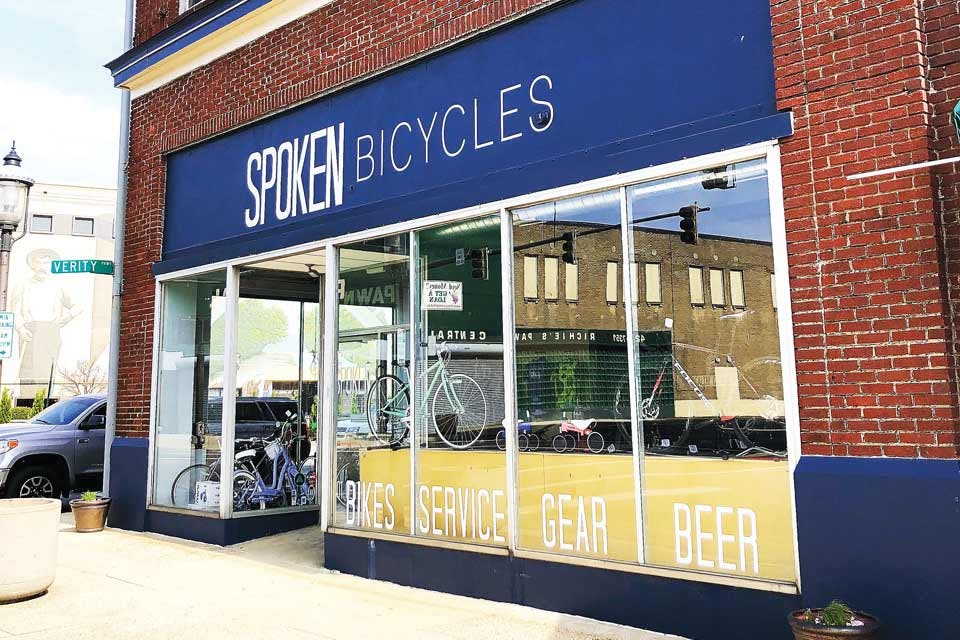 Bicycles line the windows and a beer list written on brown butcher paper hangs from the wall. While some patrons enjoy craft brews or Moscow Mules, others order $10 brake adjustments. Visit on a Friday night, and you’ll question whether you’ve walked into a bike shop or a bar, but co-owner Otto Bohn can clear that up for you.

“It’s a bike shop with a bar,” says Bohn, who opened Spoken Bicycles in Middletown with his wife, Mallory Greenham, in May 2017. “Go for a ride, come back, hang out, have a beer.”

The business started as a pop-up shop in March 2016, doing scheduled bike tune-ups and helping at local bicycling events. A year later, Bohn and Greenham began looking for a permanent location in downtown Middletown.

The small shop has a rotating assortment of four, usually Ohio-made, craft beers on tap, making way for new options every week-and-a-half to two weeks. Greenham oversees the cocktail menu, which changes monthly.

Make no mistake though, Spoken Bicycles is first and foremost about selling, repairing and riding its namesake mode of transportation, which has a rich history in Middletown. In the late 19th and early 20th centuries, the Miami Manufacturing and Cycle Co. made both motorcycles and bicycles, with their most popular pedaled variety being the Racycle.

“There’s a local doctor in town who’s a huge biker and he actually has a couple of [Racycles],” Bohn says. “He let me display one in the shop for a while. … It’s from the late 1800s and it was built right here in Middletown.”

The city’s last bike shop closed a few years before Bohn and Greenham moved to town in late 2015. Greenham, a Middletown native, returned to become executive director of Downtown Middletown. Bohn had been working in a bicycle shop in Cincinnati at the time, but with the focus on new businesses in town, he knew he wanted to open his own place.

“Middletown hasn’t had a shop in a while, so at first I was just trying to bring some service back to the area,” he says. “I was coming from a cycling community that’s more established and has a big following. I think one of the most fun parts about opening this shop has been building that community here.”