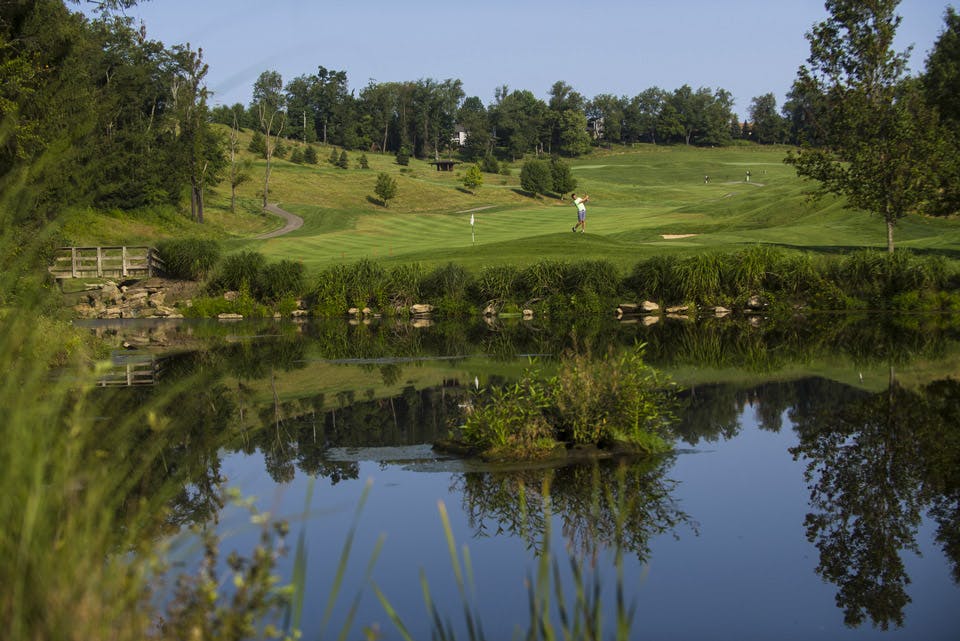 Head south across the Ohio River and find a range of fun and tasty food in these cities.

Heading to West Virginia for a weekend adventure promises scenic drives along winding mountain roads, but four cities a short drive from the Ohio border offer an array of food, drink and entertainment options. From the capital city’s gourmet pizza shop to a college-town theater that welcomes Broadway tours, choose a destination that fits your tastes.

››Eat Here: Hidden behind plaster and dropped ceilings, Later Alligator owner Susan Haddad found brick walls and an original tin ceiling when she purchased this former saloon 13 years ago. “We completely restored its 1869 center ... and we have recycled material from when Wheeling Steel went out of business,” Haddad explains. It might not seem like a typical creperie, but neither is the off-the-wall menu of generously-stuffed sandwiches and homemade soups. The All Hat And No Cattle crepe is a savory customer favorite stuffed with southwest Cajun chicken, black beans, Monterey pepper jack cheese, oven-roasted tomatoes and spinach topped with Mornay sauce. 2145 Market St., Wheeling 26003, 304/233-1606, lateralligator.net


MOUNTAIN MUSIC: Charleston
For more than 30 years, National Public Radio listeners across the nation have tuned in to “Mountain Stage with Larry Groce.” The two-hour live broadcast hosted by Groce is carried by nearly 150 NPR affiliates, and most of the 26 new shows recorded annually take place at the Culture Center Theater in Charleston. Each show features four to five musical guests in varying genres, and the intimate theater space leads to energetic and passionate live performances. “We like to look at ourselves as a musical-diverse discovery program,” says “Mountain Stage” executive producer Adam Harris. “We vary stylistically when it comes to the genre of performers, with everything from Americana to folk, and country to indie rock.” Greenbrier and Washington streets, Charleston 25311, 800/594-8499, mountainstage.org

››Eat Here: Pies and Pints offers customers a lineup of creative pizzas including the Grape & Gorgonzola (loaded with red grapes, gorgonzola and rosemary) and the Black Bean pie (a pizza loaded with burrito fillings and toppings such as black beans, cheddar, jalapenos, salsa, cilantro and creme fraiche). As its name implies, the place also stocks plenty of craft beers. “We’re hoping to broaden all of our customers’ horizons,” says manager Megan Ellars. “[We’re] interested in tastes and flavors that you wouldn’t find in just any pizza shop.” 222 Capitol St., Charleston 25301, 304/342-7437, piesandpints.net


ON STAGE: Huntington
One of the leading vaudeville performance spots in 1928 when it opened, the Keith-Albee Performing Arts Center is listed on the National Register of Historic Places and has undergone multiple restorations. It served as a movie theater for decades and has hosted performances by Ethel Merman, Frank Sinatra and Liza Minnelli. Today, the nonprofit performing arts center hosts touring Broadway shows and is home to the Marshall Artists Series and the Huntington Symphony Orchestra. “The neighborhood has contributed so widely to [the theater’s] restoration,” says co-president David Tyson. “Money raised by the community is what has made it the true centerpiece of Huntington.” 925 Fourth Ave., Huntington 25701, 304/525-4440, keithalbee.com

››Eat Here: From the tomatoes and flour shipped from Naples to the cheese brought in from Rome, authenticity and tradition is central to La Famiglia, an Italian trattoria located in an 1890s house. “When you walk through the door, we want you to feel right at home,” owner Ralph Hagy says of his family-owned restaurant. Southern Italian dishes are prepared from scratch, and items such as pizzas, seafood dishes and steaks are cooked in a wood-fired oven. “Our homemade La Famiglia sauce recipe is over 100 years old,” Hagy says, adding that his mother taught him it. “We still follow it to this day.” 1327 Sixth Ave., Huntington 25701, 304/523-1008, lafamigliawv.com


WINE COUNTRY: Morgantown
Nestled in the Appalachian Mountains on the outskirts of Morgantown, Forks of Cheat Winery is named for the white waters of the Cheat River that run below this spot’s perch high above it. July will mark the 25th anniversary of the winery’s opening, but owner Eric Deal and his father, Jerry, have been in the wine-making business since the 1980s. “When I first started helping my dad, I was forced to crank the hand machine, he got to taste the wine,” recalls Eric. Today, the winery produces more than 23,000 gallons of wine each year, specializing in French hybrids and fruit wines. “We have a blackberry wine that is 100 percent blackberry picked straight from our own farm,” Eric says. 2811 Stewartstown Rd., Morgantown 26508, 304/598-2019, wvwines.com

››Eat Here: Atomic Grill works with all-organic ingredients that arrive fresh from the local purveyors who surround this go-to barbecue spot. Seven different types of barbecue sauce smother in-house smoked meats such as brisket, chicken and pork. “Our pulled pork with West Virginia barbecue sauce — a tangy, not-so-sweet, not-so-hot sauce — is a fan favorite that people can’t get enough of,” says manager Michael Whalen. The vibe is relaxed, making it a great place to roll up your sleeves and chow down. As Whalen says, “There’s no other way to enjoy barbecue.” 595 Greenbag Rd., Morgantown 26501, 304/241-1170, facebook.com/atomicgrill