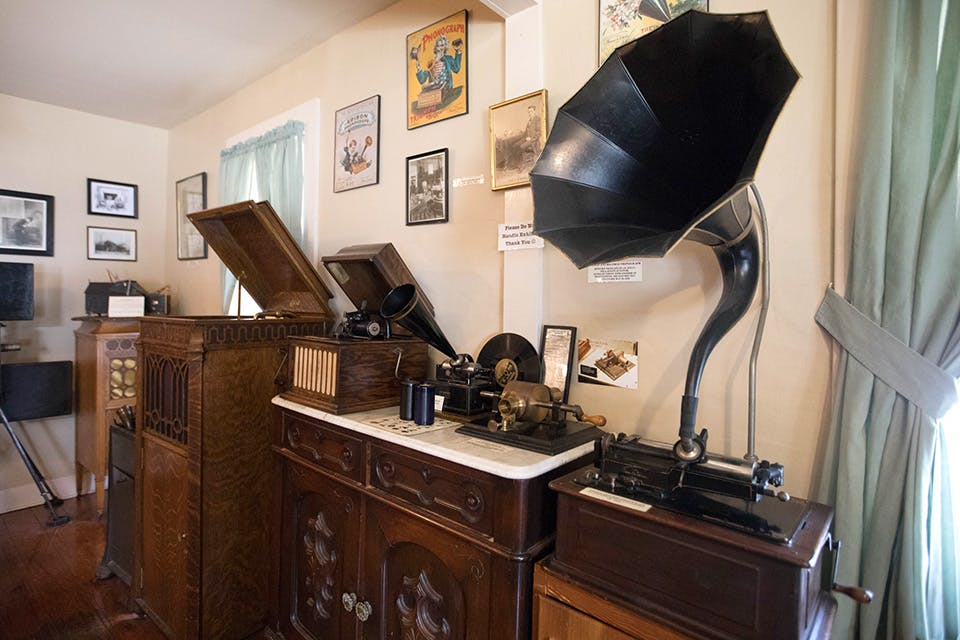 This historic site tells the story of how one of the world’s most famous inventors got his start in the Erie County town of Milan.

The town of Milan’s prosperity is what led Samuel Edison there in 1840, after his family had once again found themselves on the wrong side of political upheaval. His grandfather John was a Tory and had been forced to leave New Jersey for Canada during the American Revolution. Samuel Edison was part of the Papineau-McKenzie Rebellion, an unsuccessful uprising in Canada — then another British colony — and decamped for America. Milan, Ohio, was booming at the time thanks to its canal, making it the second-largest inland grain port in the world, behind only Odessa, Ukraine.

Samuel, his wife Nancy and their children moved to the Erie County community in 1841, purchasing a lot and building a house not far from the canal path, which ran next to the less passable Huron River. In that house, on Feb. 11, 1847, their seventh and last child was born. He was named Thomas, after his uncle, while his middle name, Alva, was taken from Cleveland ship captain Alva Bradley, Samuel Edison’s friend and benefactor. (Alva Bradley would become a noted shipping magnate; his grandson and namesake owned the Cleveland Indians in the 1920s and 1930s, and another grandson Charles was one of the owners of Higbee’s Department Store.)

Eventually, the railroads came and bypassed Milan, turning it back into the sleepy small town it remains today. In 1854, the Edisons sold the house and moved to Port Huron, Michigan. But while Milan’s stay in the spotlight was brief, Thomas Edison would shine brightly beyond his lifetime. He became one of the most famous and prolific inventors in history, with 1,093 patents, including the incandescent lightbulb, phonograph, movie camera and batteries. 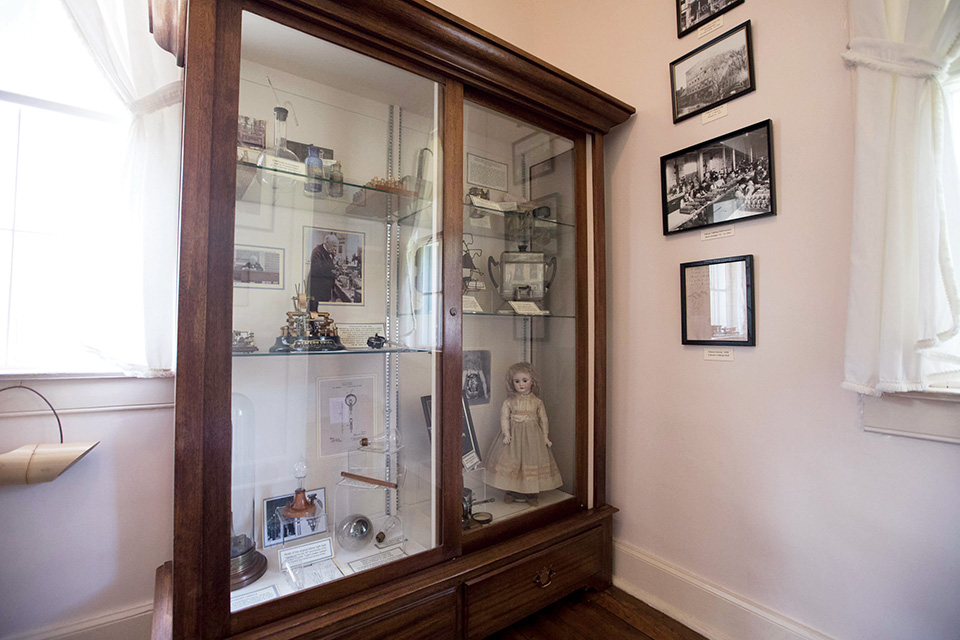 Thomas Edison invented a number of products, including a talking doll, displayed in this cabinetry. (photo by Cody York)

His sister, Marion Edison Page, who was married in the parlor of the home in 1849 and stayed in Milan after the family left, bought the home in 1894, and after her death it passed into Edison’s hands. He held on to it until his death, and on the centennial of his birth, in 1947, it opened as the Thomas Edison Birthplace Museum.

The home was restored to look like the simple farmhouse it was when Edison lived there as a boy, humanizing the man known as the Wizard of Menlo Park.

“He’s almost seen as a demigod who descended to Earth,” says Robert Wheeler, direct descendant of Marion Edison Page and president of the museum’s board of trustees. “But he’s just a person. Great people can come from modest beginnings.”

When Marion Page bought the house, she updated it to reflect modern sensibilities, adding indoor plumbing. (Although it was not until well after she died that Edison’s most famous invention, electric lights, was added. Supposedly, the inventor visited the home in 1923, while he was in Ohio for President Warren G. Harding’s funeral and was aghast to find that his boyhood home still had gas lights.) 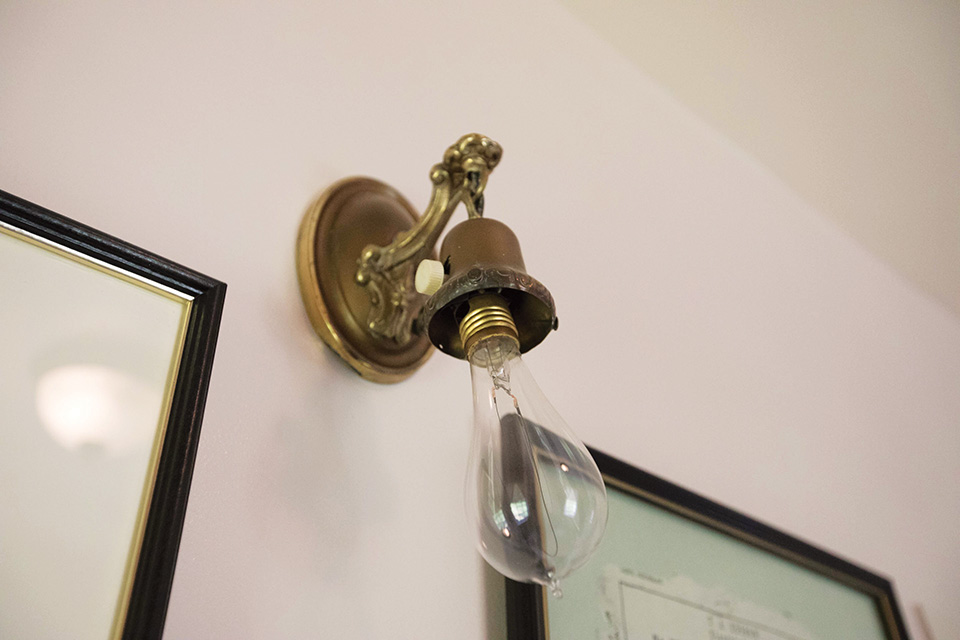 While Edison himself owned the house, he had little interest in making it a museum, resisting entreaties to donate it to Ohio to do so. But after his death, his wife Mina and their daughter, Madeleine Sloane, wanted it to serve as more than just a memorial.

“We especially want children to get the inspiration that a true picture of him should provide,” Sloane remarked when the site was named a National Historic Landmark.

Edison’s formative years in Milan were no different than those of any other children of modest working-class means. He was not a gifted student (in parlance of the time, he was described as “addled,” and more recently, people have speculated that he had some variety of a learning disability), and ultimately, he was educated at home by his mother, a former teacher. Edison himself later said, “My mother was the making of me.” A statue of Edison’s mother with her youngest child stands in the square in Milan. 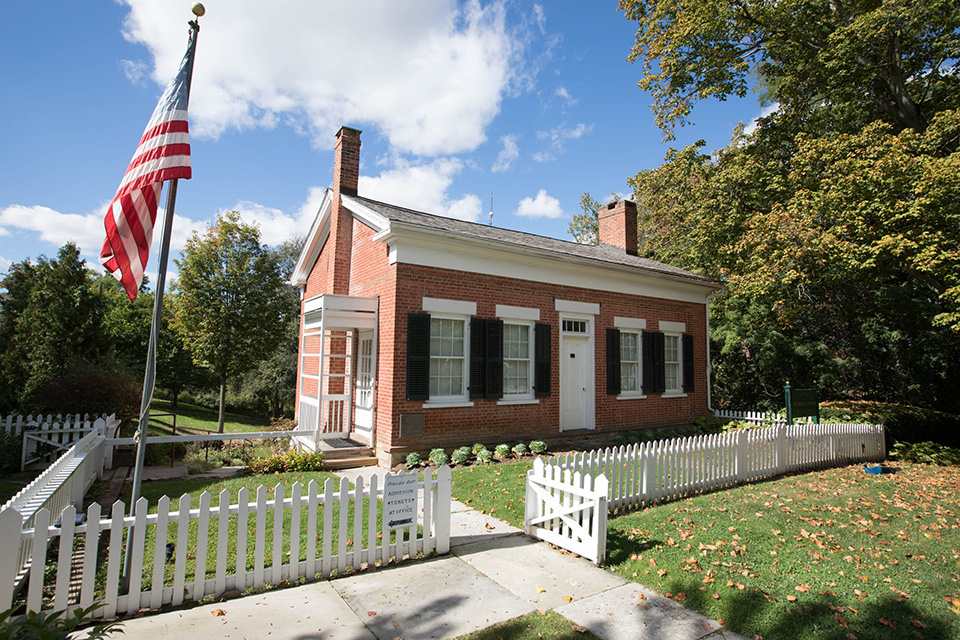 The inventor’s birthplace has three stories: a ground floor at street level, an upper floor with two bedrooms and a basement with a kitchen. (photo by Cody York)

Young Thomas likely spent time in the sitting room of the home (the warmest room of the house because it had a stove) figuring out letters and words and asking his father innumerable questions.

The home essentially has three stories: a ground floor at street level, an upper floor with two bedrooms, which seems hardly big enough for a family the size of the Edisons’, which included seven children (four of whom lived to adulthood) and a basement with a kitchen that opened out into a sloping backyard that led down to the canal. Sometimes, young Thomas would venture along the canal to talk to the craftsmen, businessmen and sailors that populated the area.

“As young as he was, he was able to go to the warehouses and the other side of the basin where ships were being built,” says Lois Wolf, director of the museum. “He was just so enriched with things going on all the time.”

A fire destroyed most of the Edisons’ possessions while they were living in Michigan, but there are some items in the home that are original to the Edison family at the time they lived there, including the kitchen clock and upstairs decor, like the thousand-shell bedspread (believed to have been sewn by Nancy Edison), painted pine furniture and Sam the pig, a porcine footstool. Most other furniture, including the black horsehair sofa in the fancy sitting room, is at least authentic to the period, with some donated by residents when the house was being prepared to become a museum. Others Madeline bought with the intention of remaking the space as close as she could to what it looked like when her father lived there, according to Wolf. 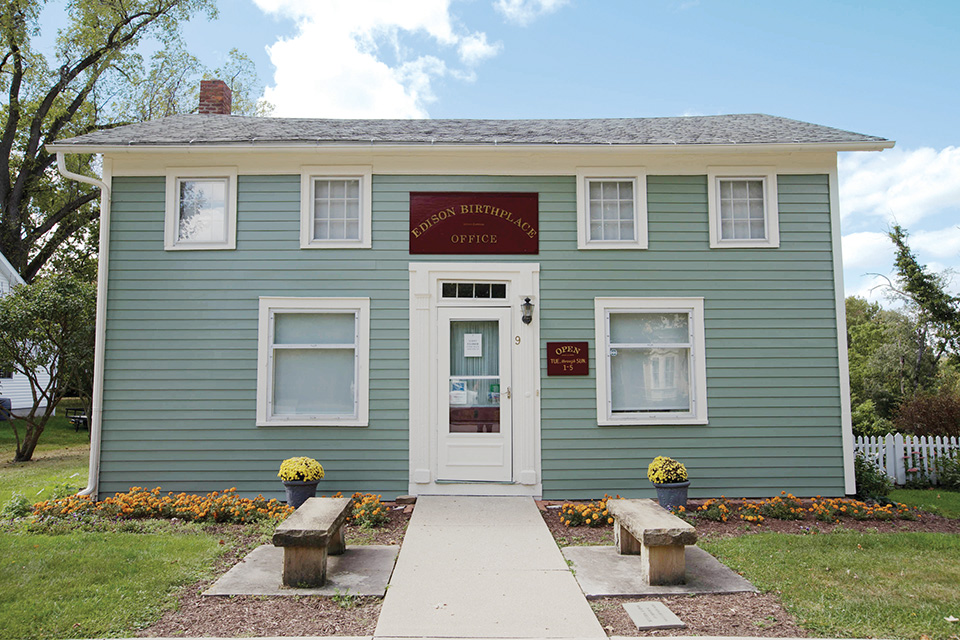 The house next door holds a small office and museum. (photo by Cody York)

Next door, in another home believed to be contemporary to the Edisons’, is a small office and museum. Among the items on display are one of the Grammys won by Edison posthumously. (Ironically, Grammy is short for Gramophone, produced by Victor, a competitor of Edison’s.) Some of Edison’s inventions are also on display, from motion picture cameras to phonographs to his infamous talking doll, a heavy child’s toy whose voice is the stuff of nightmares. (Edison called them “little monsters,” not for their creepiness, but because they were a commercial failure.)

Edison’s greatest fame came after his relocation to his ancestral home, New Jersey. He moved there, Wheeler says, to have greater access to capital. (Similar needs led one of Edison’s contemporaries to do the same. He was a young shipping clerk who grew rich in the nascent oil refining industry in Cleveland: John D. Rockefeller.)

But Ohio never forgot Edison, and the feeling was mutual.

“Here is a man who is in the closing years of his life, who has friends all over the world. A man whose associates are millionaires, great scientists, industrial kings and yet he remembers and loves the place of his youth,” The Chronicle-Telegram of Elyria noted in a 1929 editorial. “Mr. Edison has not forgotten old friends and old associates here in Ohio.”

The museum is closed in January, but it will reopen in February. It is open for tours Friday through Sunday and reservations can be made online. For more information, call 419/499-2135 or visit tomedison.org.