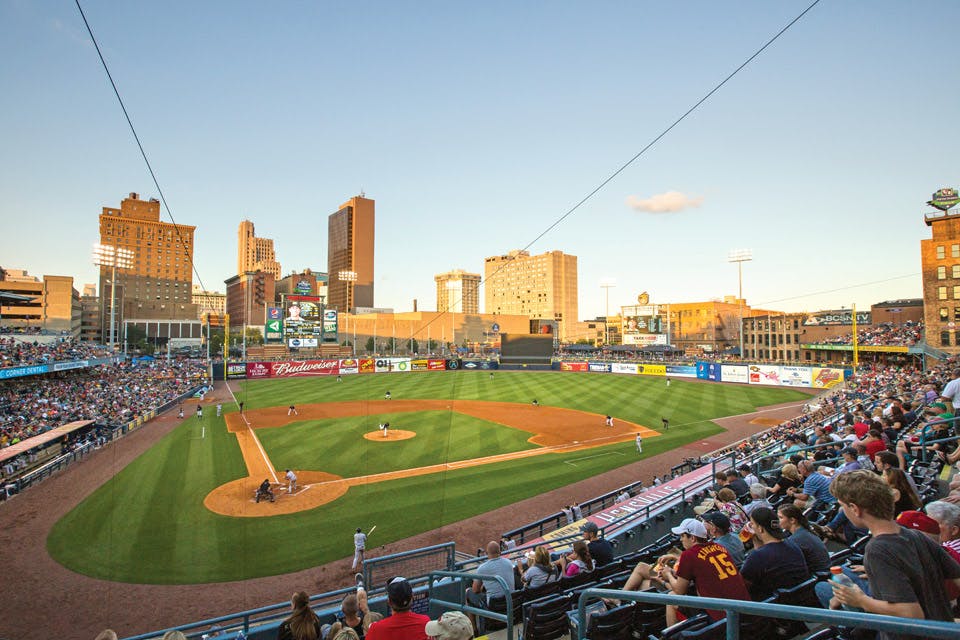 Check out a zip line across the zoo’s African savanna and the Mud Hens’ new entertainment district.

Baseball’s nostalgic pull will always bring us back to the ballpark each summer, but the days of a stirring rendition of “Take Me Out to the Ball Game” being the high point of off-field entertainment are long gone.

So, this year, the Toledo Mud Hens are pitching the upcoming season with a new approach — one that finds the team, which has been playing at Fifth Third Field downtown since 2002, embracing the idea of providing a place for people to hang out and socialize during the game. Dubbed Hensville, the new entertainment district has given new life to three buildings covering more than 70,000 square feet and nearly an entire city block along St. Clair Street directly outside the ballpark. The $21 million development will offer rooftop areas to view the action on the field and new options for pregame dining.

Mud Hens general manager Erik Ibsen estimates that 75 new businesses have moved into Toledo’s Warehouse District in the 14 years since the Mud Hens relocated from the former horse-racing track they played on in Maumee. The team’s front office saw room for even more growth.

“There were some buildings that were vacant probably 20, 30 years prior to us moving downtown,” explains Ibsen. “We thought, What if we could develop these ourselves, add them to the Warehouse District footprint, and make them a part of the ballpark?”

“There’s going to be a retail presence with our Swamp Shop,” says Ibsen, referring to the Mud Hens’ apparel and souvenir store. “There’s actually an office space component. Two or three companies are going to be leasing space from us.”

But the most exciting aspects of the new development are the opportunities to create a place where people can have fun. Just outside the ballpark, a new green space will replace a former parking lot, and the commons will also provide a place to host summer concerts (the first of which was set for March 19 at press time).

“Our job when people come to the ballpark — whether they’re here to see a Mud Hens game or to see a concert — is to entertain them,” says Michael Keedy, the Mud Hens’ director of entertainment and events.

A nine-part concert series featuring both local and national acts will serenade weekend patrons on select Fridays from April through September. The Rooftop Comedy Series will also take place on top of the Fleetwood Building starting on April 19 and continuing on select dates throughout the summer.

Hungry visitors to Hensville will find more than just hot dogs to satisfy their appetites. The new Nine at Hensville restaurant, a modern tavern with a sleek design, will offer creative takes on classic American favorites, while the craft beer bar Fleetwood’s Tap Room promises 75 brews and 48 rotating taps. 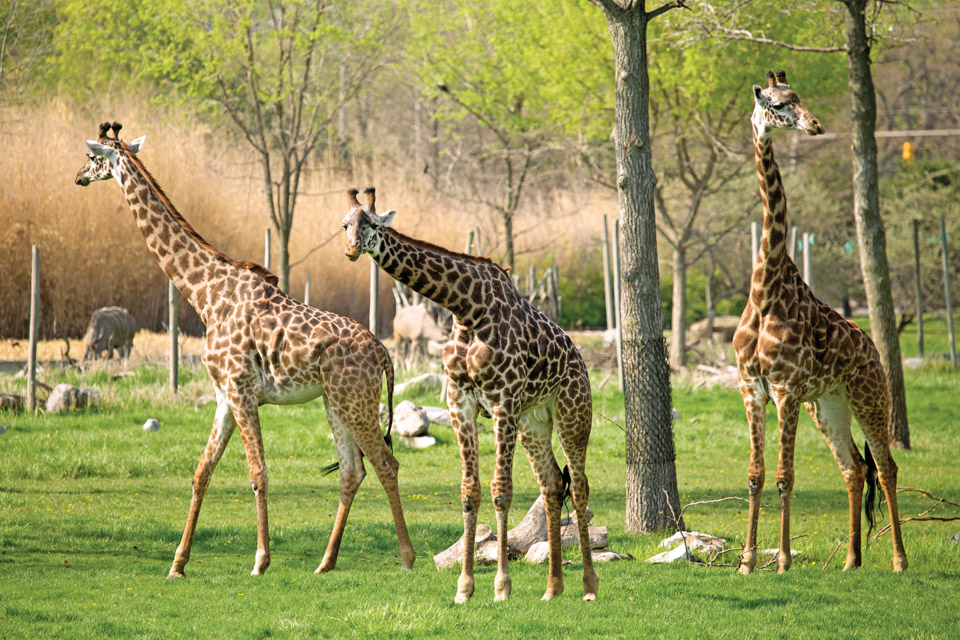 There’s a bit of the African savanna to be explored in northwest Ohio. Inside the Toledo Zoo, giraffes, zebras and impalas roam a grassy expanse, and up until this year, the closest way to experience the “Africa!” attraction was to hop on the Safari Railway that traverses the perimeter of the grasslands.

But that all changes next month, when the zoo unveils an adventure experience dubbed “Expedition Africa” that provides guests a bird’s-eye view of the savanna.

“We continuously look for ways to enhance the guest experience,” says Dennis Schnurbusch, director of visitor services “The ‘Africa!’ exhibit provided us the best opportunity to enhance and give the guests a unique perspective.”

While the top draw at the zoo’s new attraction is a more than 750-foot zip line course, developers also took care to provide a multifaceted experience.

“It’s a lot more than just a zip line,” says Adam Cassi, assistant adventure course and amusement manager. “It’s got a number of challenge elements to it, where you’re going from platforms to rope bridges to wires.”

Several towers will provide obstacles such as climbing walls, before culminating in the zip lines, which launch from an 80-foot high platform.

Guests who aren’t ready to sail over the savanna can opt for a more concentrated adrenaline rush with three different quick-drop lines — two from 30 feet and one from 80. For a more leisurely (but still elevated) experience, three 250-foot-long bridges provide guests an opportunity to walk above the “Africa!” attraction. 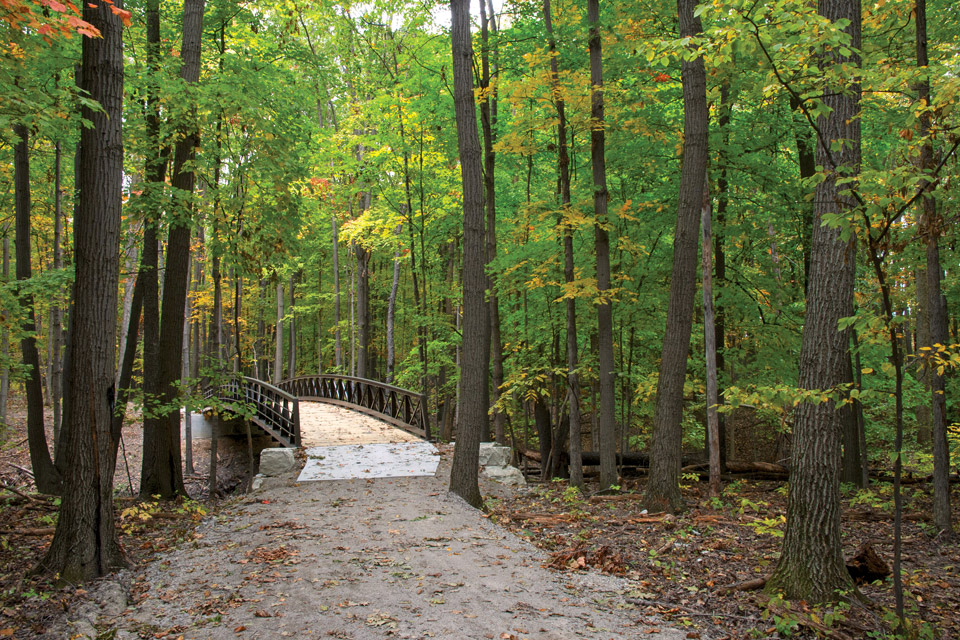 The arrival of warm weather means afternoons of meandering walks and long bike rides, and those who use the Metroparks Toledo system now have the chance to explore a piece of American history. Last October, the park system opened the Fallen Timbers Battlefield, the site of a key Aug. 20, 1794, battle between the United States government and the American Indians who called the land home.

There’s a mile-and-a-half pedestrian trail and signs along the way that educate visitors about what occurred on the site, while a bridge connects the battlefield to the nearby Fallen Timbers Monument. The park site also includes a pavilion that guests can reserve for special events, and its location provides access to the Wabash Cannonball Trail — a 63-mile long multipurpose path that touches four northwest Ohio counties.