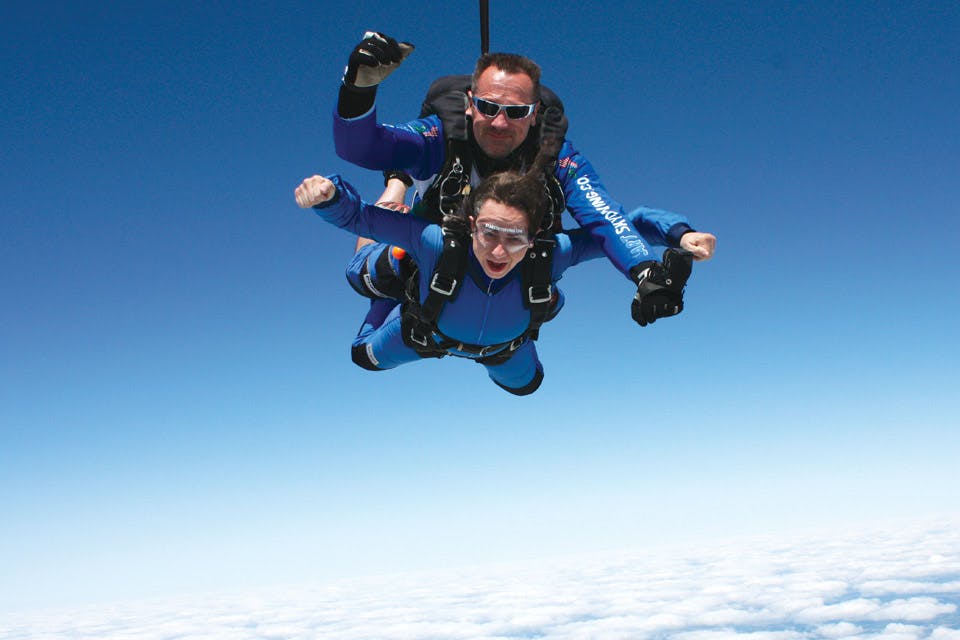 From outdoor fun to sheer adrenaline, these attractions show why a visit to southwest Ohio should be part of your travel plans.

Jumping out of an airplane might sound scary to some, but according to John Hart III, chief instructor at Middletown’s Start Skydiving drop zone, there’s no bigger rush in the world.

“A lot of people are really nervous when they come in. That’s normal,” says Hart, whose father, John Hart II, opened the business in 2006. “It’s not normal to jump out of an airplane, but anyone who’s ever done it will tell you it’s a blast.”

John Hart II founded Start Skydiving after spending his early career as an Army Airborne Ranger. Jumping at commercial drop zones around the country made him realize a lot of locations cut corners and overcharged their customers. He wanted people to have a better option available, and Start Skydiving is now the No. 1 ranked drop zone in the country, according to dropzone.com, a skydiving-community website. The business has tandem and accelerated training programs available for beginners.

If you go up in one of Start Skydiving’s planes, you’ll likely fly right over Jimco’s Riverside Pizza & Kayaking, located on the Great Miami River near the Middletown Airport. Owner Jim Zickgraf opened his kayak livery in 2015 and offers rentals and drop-off/pick-up service as well as a tasty meal. At the end of the trip, kayakers can relax and refuel at Zickgraf’s pizza joint, which also offers hoagies, wings, soft drinks and beer.

“I do guided trips for people who aren’t familiar with kayaking or the river,” says Zickgraf. “If they don’t need a guide, one of my put-ins is calm and wide and slow and good for beginners. There are plenty of places to get out, lots of sandbars. It’s very scenic.”

On longer floats, guests can even call in a food order and Zickgraf will bring pizza and soft drinks to them at a picnic spot along the river. “People dig that,” he says with a smile. 2401 Carmody Blvd., Middletown 45042, 513/424-1529, facebook.com/jimcoproductions 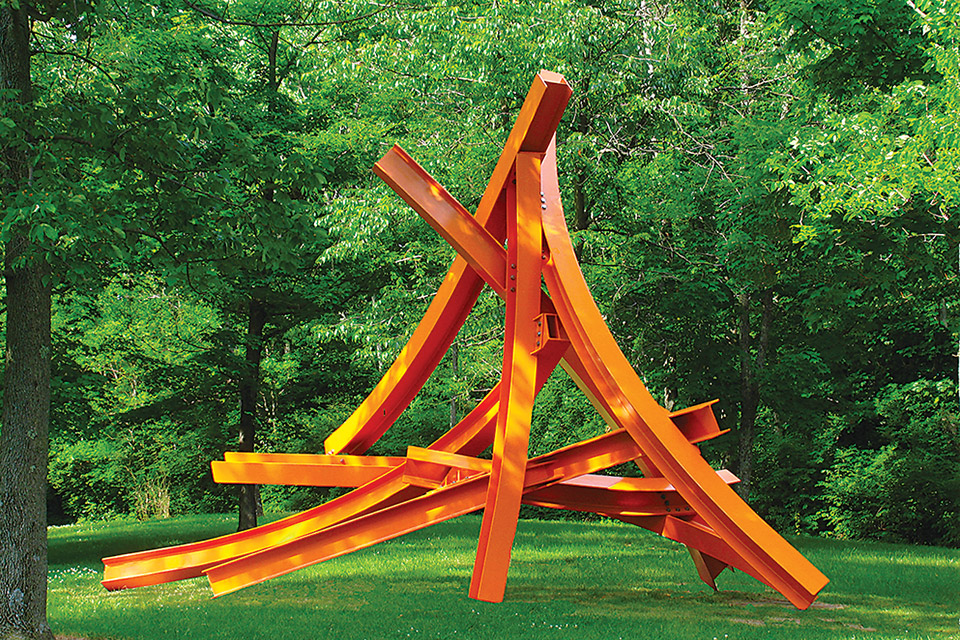 Farther down the Miami River in Hamilton sits the 300-acre Pyramid Hill Sculpture Park & Museum, which features more than 70 outdoor works spread across its rolling hills, meadows and small lakes. A trail allows visitors to stroll among the sculptures, and golf carts can be rented for a more leisurely tour.

“His medium is light and sound,” she explains. “He records a single guitar note on each of about 30 speakers and spreads them in a circle. They each have a solar panel on top. Depending on the cloud pattern, the speakers play a song. Every time it’s different, so it’s really the sun and clouds playing the music.”

After touring the grounds, visitors can check out an indoor exhibit of ancient sculptures.

“Pyramid Hill is the only place in the Midwest where you can experience both ends of sculpture,” says Barton. “You can look at sculpture from thousands of years ago and look at modern sculpture and see what’s being said now.” 1763 Hamilton Cleves Rd., Hamilton 45013, 513/868-1234, pyramidhill.org

Southwest Ohio is full of natural beauty, and one of the best places to experience it is Miami University’s Natural Areas — a 1,000-acre tract of land crisscrossed by 17 miles of hiking trails located adjacent to the campus in Oxford.

Liam Mosley, a Natural Areas crew member and graduate student at Miami University, loves the terrain of the park, which includes three creeks, floodplain areas, an old-growth forest and a pine reserve.

“Each creek has its own feel,” explains Mosley, who is particularly impressed by the Silvoor Biological Sanctuary, a 2.5-acre tract added to the park in 1978. “Forty years ago it was the town dump, and now it’s a wildflower sanctuary. It’s absolutely beautiful.”

The Miami University Natural Areas also include a bird blind and a butterfly garden where hundreds of native species can be observed. The trails are free to use and open to the public. The park hosts wildflower walks every spring and is home to 23 hidden geocaches for those looking for an adventure.

“People tend to spend a lot of time focused on what’s directly in front of them,” says Mosley. “They don’t realize these trails are here.” Oxford 45056, 513/524-2197, miamioh.edu/student-life/natural-areas 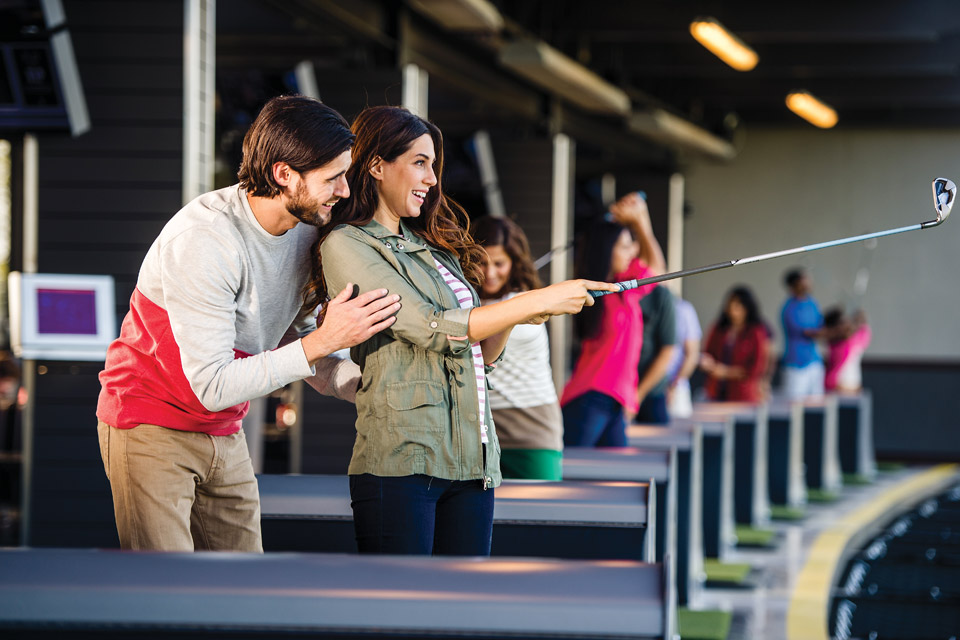 Topgolf in West Chester offers a little something for everyone, not just those who are seriously looking for ways to shave a couple strokes off their game.

“We like to say we’re a sport entertainment venue, not just a spot for traditional golfers,” says manager Anne Winegardner.

Topgolf features a full restaurant and bar, and hosts live music and other events. There are also activities for kids, more than 200 high-definition TVs, giant Jenga and pool tables.

Of course, golf is still king here, and the facility has over 100 climate-controlled bays that allow golfers to drive balls or play one of several predesigned skills challenges in any weather. Each golf ball contains a microchip, allowing for precise measurements. Topgolf’s West Chester location also has two PGA-certified pros on staff to provide lessons, and children can learn the basics of the game during KidZone summer camps.