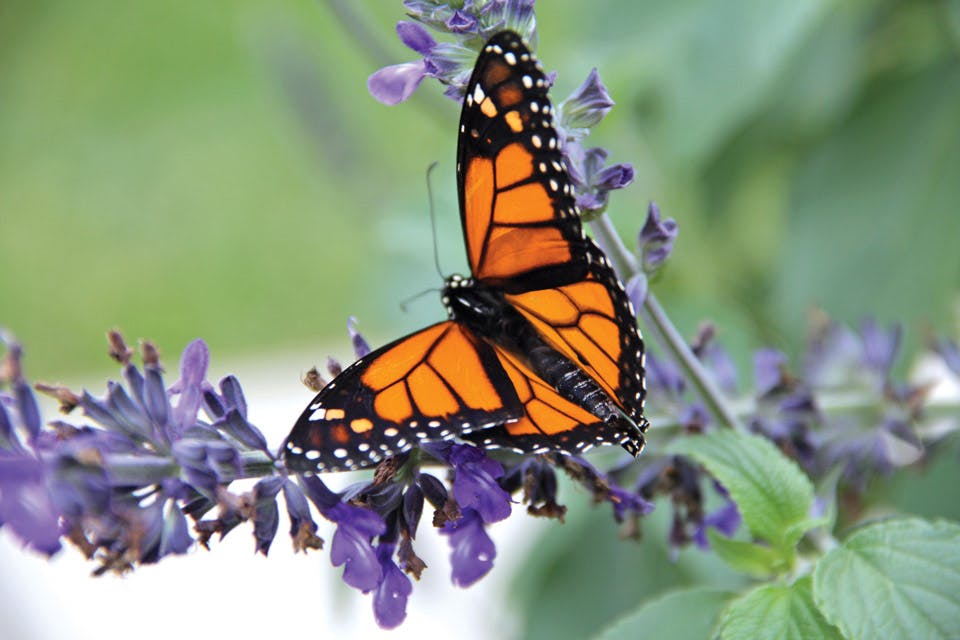 Make a spring escape to a tropical haven at Franklin Park Conservatory.

Stepping into the Franklin Park Conservatory’s Pacific Island Water Garden is like visiting an idealized Hawaiian rain forest. Pathways wind through lush greenery dotted with colorful and exotic flowers. A waterfall tumbles into a koi-filled pond. And, from March 12 through Sept. 18, thousands of butterflies fill the air.

“Blooms & Butterflies” is an annual tradition at Franklin Park Conservatory and Botanical Gardens. The enclosed biome that houses the exhibition has more than two dozen butterfly species floating through it at any given time, including favorite tropical varieties such as orange Julia longwing and the popular blue morpho. With a wingspan measuring up to 4 inches, it is the biggest butterfly featured in the exhibition.

“I heard that it has been identified as being the bluest thing on Earth, second only to the blueberry,” says Lori Kingston, who oversees the exhibition as Franklin Park Conservatory’s director of visitor experience and marketing.

Although tropical species from around the world have been exclusively featured in recent years, the 2016 edition of “Blooms & Butterflies” shifts its focus to include species native to the Americas, with particular emphasis on the threatened monarch butterfly.

“It’ll not only be beautiful, but there’ll be a message and some awareness about what’s going on,” says Kingston.

The insects arrive at Franklin Park Conservatory as chrysalises, and educational programs held twice a day highlight how emerging butterflies are introduced into the garden, as well as provide an overview of their life cycle and importance to plants. Visitors can get up-close looks at the delicate creatures as they flutter by, dip for nectar in the flowers or perch atop rocks to soak up moisture. Artist Dale Chihuly’s 15-foot tower of bright red and yellow glass, which is installed in the middle of the Pacific Island Water Garden, is a popular spot for the winged creatures to roost. They may even land on you, if you’re lucky.

“There’s a particular aftershave — we haven’t found out yet what it is — that attracts them,” Kingston says with a laugh. “Bright colors will attract them to you as well — oranges and pinks and yellows.”