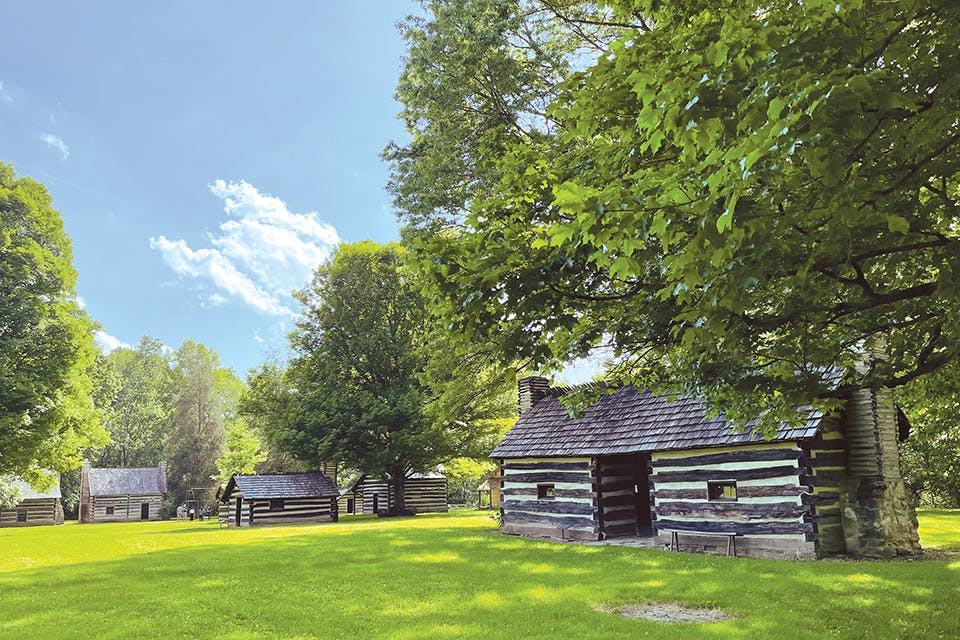 Founded in 1772, this village in what is today Tuscarawas County was the site of Ohio’s first Christian settlement.

Stand outside Schoenbrunn Village’s log-built schoolhouse, and you are at the heart of the community that thrived here between 1772 and 1777. A nearby kiosk shows an artist’s bird’s-eye-view depiction of the rows of cabins that once lined the roads of this village of 300 residents, which included Moravian missionaries led by David Zeisberger and members of the Delaware tribe (also known as Lenape) who were being assimilated to Christianity.

“It was the site of Ohio’s first church, Ohio’s first schoolhouse,” says Wendy Zucal, director of the Schoenbrunn Village Historic Site, adding that the community was isolated on the Ohio frontier. “In the midst of all that survival, they had a church with paintings on the walls and a schoolhouse where both boys and girls were educated.”

Conflicts between settlers and natives, and the onset of the Revolutionary War, led to the demise of Schoenbrunn, which was abandoned in 1777. During the 20th century, records kept by the Moravian Church helped researchers pinpoint the village’s location near New Philadelphia. Archaeological work confirmed that fact, and during the 1920s and ’30s, 20 of Schoenbrunn’s residences and community buildings were rebuilt in their original locations.

Today, as Schoenbrunn Village marks the 250th anniversary of its settlement, it continues to welcome travelers to explore its 18 structures and visit the village’s cemetery. Efforts are ongoing to rebuild two of the buildings from the 1920s that were lost over the years, and long-term plans include adding more re-creations of residences that stood here during the 18th century.

“We already built a [metal-framed] ghost building,” says Zucal, explaining that it identifies where the next structure will be built to help spur donations. A new sculpture installed near the village’s entrance depicts the clans of the Delaware nation: the Turtle, the Turkey and the Wolf. Other improvements have also been made to deepen visitors’ understanding of the site. “We wanted to make sure we were doing things that had a good, lasting impact.”