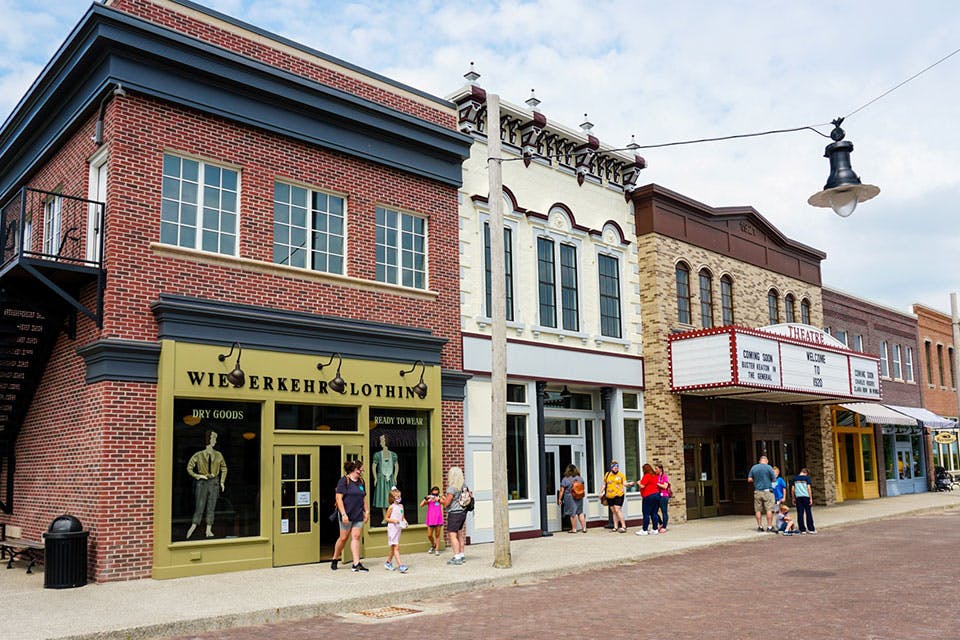 Ohio’s largest living-history attraction has added a new chapter to its Walk Through Time: a downtown block of discovery that’s 100 years in the making.

You’ll find the Rich Auto Dealership and Gas Station right on the corner. Two gas pumps with glass globes on top stand tall out front, and a pair of metal signs hang just above them. One has the words Red Crown Gasoline encircling the vintage fuel brand’s logo. The other: “Polarine, the Perfect Motor Oil.”

Just then, the station’s attendant opens the door and waves us in, one group at a time, to get a closer look at what the reality of automotive sales and service looked like a century ago. Clad in blue mechanic’s coveralls, he begins to point out the features of the like-new 1926 Model T Ford that sits in the large front window. 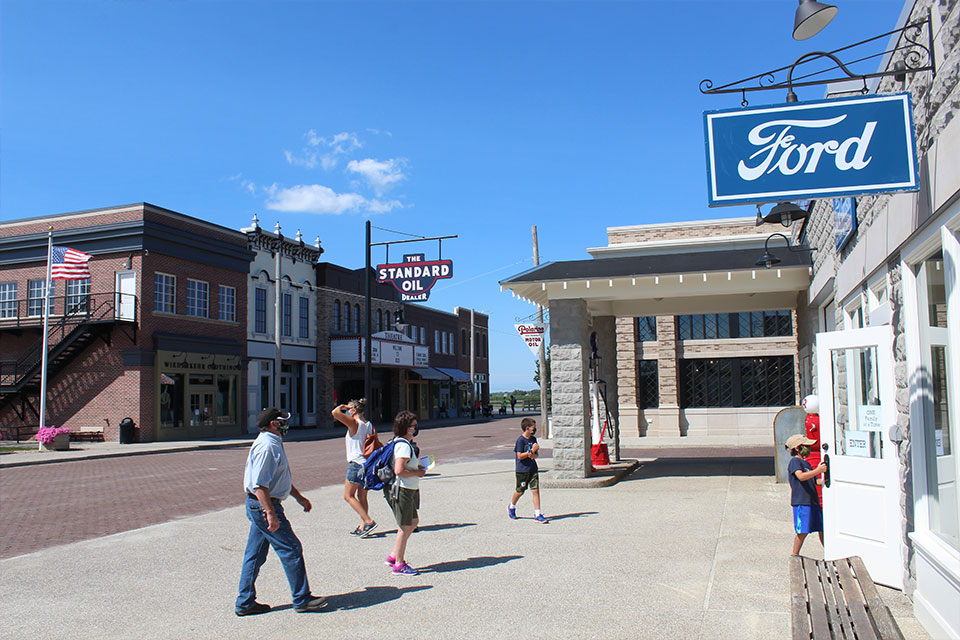 Sauder Village’s 1920s Main Street Project is the capstone to its Walk Through Time experience, which chronicles life in Ohio dating back to 1803. (photo by Jim Vickers)

“This has roll-up windows and everything … spare tire, electric lights —  it sold for close to $500, give or take,” says Willie Harman, as he rattles off the details big and small of this edition of Henry Ford’s famous automobile. He then invites us to step around the corner to check out the 1914 Model T in the neighboring bay before sharing some of the products and services offered by a dealership and gas station of the early-automobile era.

“As the salesman, I’d have to teach you how to drive a car, because all you knew was horse and buggy,” he explains. “My biggest chore was convincing you that you wanted it, because you really loved your horse and buggy. Of course, it got easier as the years went on.”

Harman is one of the costumed interpreters working at Sauder Village, a 235-acre, living-history attraction in Archbold that offers a window into Ohio’s past, starting from its 1803 founding. The Rich Auto Dealership and Gas Station is part of Sauder Village’s 1920s Main Street, a fully realized block that offers visitors the opportunity to experience the fashions, flavors and feel of the era it depicts. 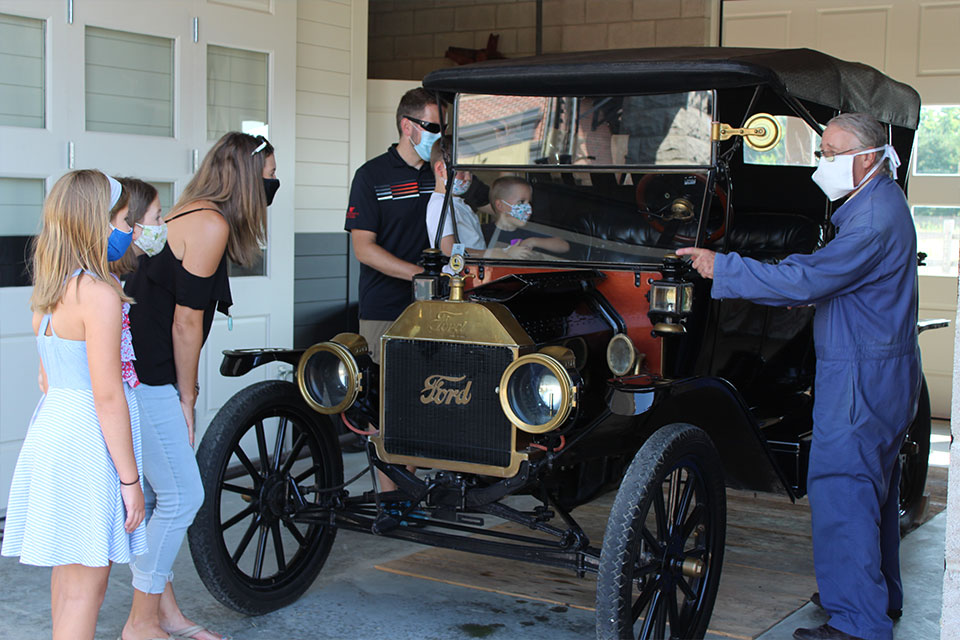 Farther down the east side of Main Street is the Ohio Farm Bureau Office, Farmers & Merchants Bank, Shuck Jewelry Store, Stotzer Hardware Store and Okuley Barbershop. The Elmira Depot sits next to a train caboose, plaza and bandstand at the far end.

Across the street, a theater marquee bears the words “Coming Soon: Buster Keaton in The General.” Here on the west side of Main Street you can visit Wiederkehr Clothing, Main Street Confections, the Hub Grocery Store and a soda fountain and pharmacy that sells era-appropriate treats such as malts, phosphates and banana splits. 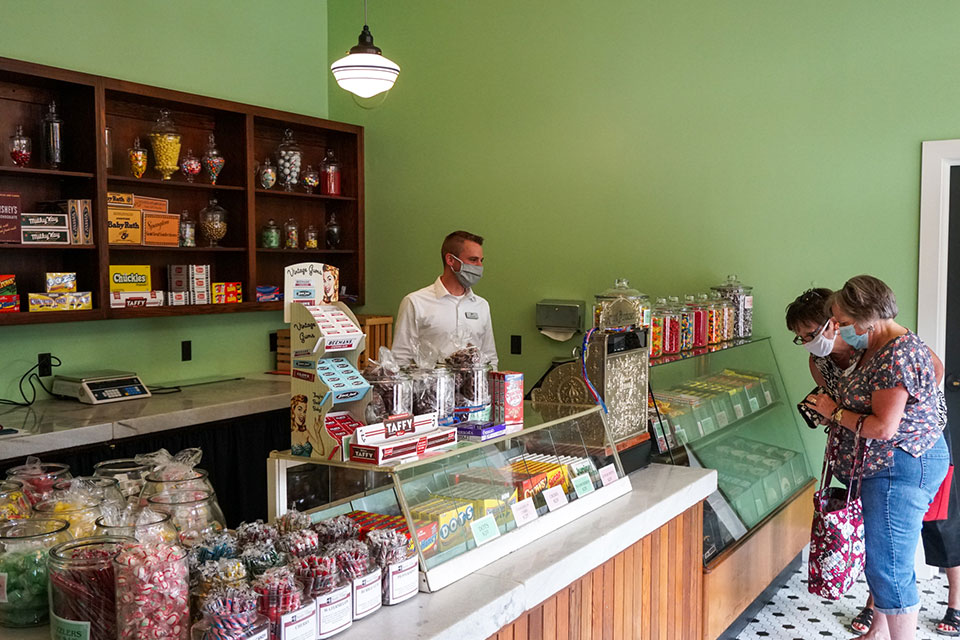 Main Street Confections is stocked with a variety of vintage candies you love, all available for purchase. (photo courtesy of Sauder Village)

Also sprinkled along Main Street is Dr. McGuffin’s Office (built in 1911 and relocated from nearby Pettisville), Fire Station #1 (housing a 1923 Ford Model T fire engine and an 1893 hand pumper) and a livery that lets visitors see what supporting horse-and-carriage transportation required before the automobile became affordable. Finally, there’s The Broken Barrel Speakeasy. Tucked away in a secret spot, it offers a small-group experience that can be purchased as an upgrade to the regular Sauder Village admission.

“Now you’re coming into more of the modern era as we remember it — as people remember it from their grandparents,” says Debbie Sauder David, Sauder Village president and CEO. “With this Walk Through Time experience, we wanted to give the whole impression of Ohio history in really just a matter of a day.” Stotzer Hardware Store is filled with items for the home one would need during the 1920s. (photo courtesy of Sauder Village)

The $6.8 million 1920s Main Street was the capstone project for Sauder Village’s master plan, explains David. It is a personal one for her, too. During the 1960s, her grandfather Erie Sauder got the idea to create a small museum at his Sauder Woodworking factory to help kids learn how woodworking was done before the advent of automated machinery.

He soon realized the idea was growing into something larger — a place that would teach both kids and adults how northwest Ohio was settled and the challenges those early pioneers faced. In 1971, Sauder purchased 9.7 acres of a local farm that included the Grime Homestead and outbuildings for what would become his Sauder Farm and Craft Village. The village opened in 1976 with 42 employees. It has since grown into Ohio’s largest living-history destination and includes the 98-room Sauder Heritage Inn, an 87-site campground, the Founder’s Hall conference facility, Barn Restaurant and Doughbox Bakery.

But the heart of Sauder Village is the Walk Through Time experience, which has been added to over the years to offer a look at Ohio’s evolution since the state’s founding. Natives & Newcomers shows what day-to-day life was like for Ohio’s Native American tribes and the European traders who lived in the area at the time of Ohio’s early statehood. The Pioneer Settlement Area illustrates life in Ohio from the 1830s through the 1870s. The Grime Homestead was the first part of the 1920s project, offering a look into rural living in northwest Ohio during the time period. The 1920s Main Street project complements it by showing how the rise of new technologies and innovations was ushering in a modern age. 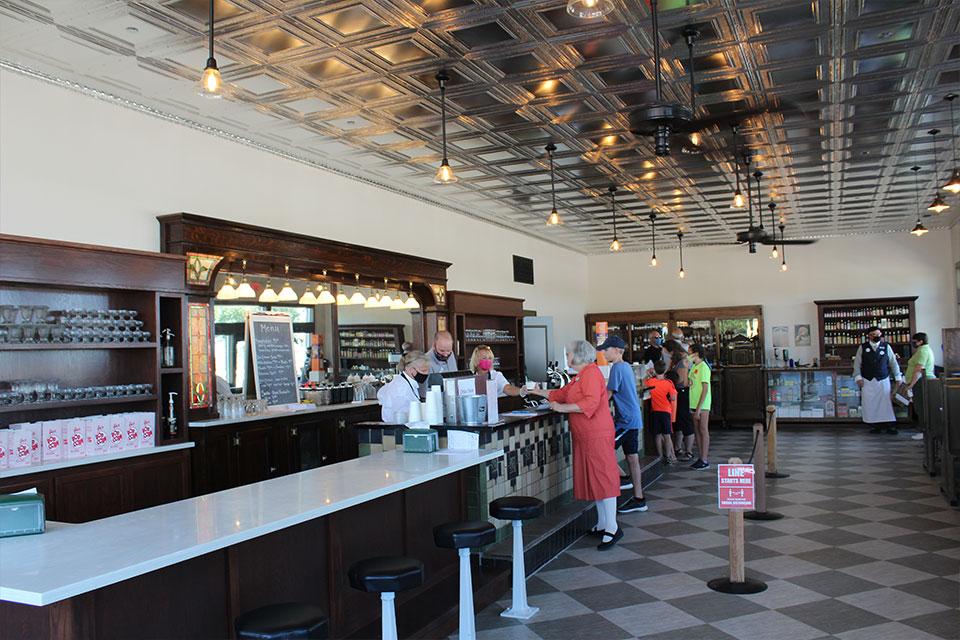 As one would expect, authenticity is deeply woven throughout the 1920s Main Street experience. Real architectural items from historical buildings in the region were merged with new construction. The top portion of the grocery store building is a tin front from a structure that was torn down in Napoleon, Ohio. Its cast iron columns came from a building in Findlay. So did the historical awning mechanisms and fire escape. But that’s just the outside.

“Furnishings for each of these buildings actually came from stores that were in business during the '20s in our region,” David explains.

In addition, Sauder Village’s curators took painstaking effort to procure additional era-specific items or recreate them with permission. (The vintage labels of familiar brands on the grocery store shelves are just one example of this level of detail.) The curators then researched the proper clothing for the era, so the costumed interpreters would look like they fit in the 1920s. 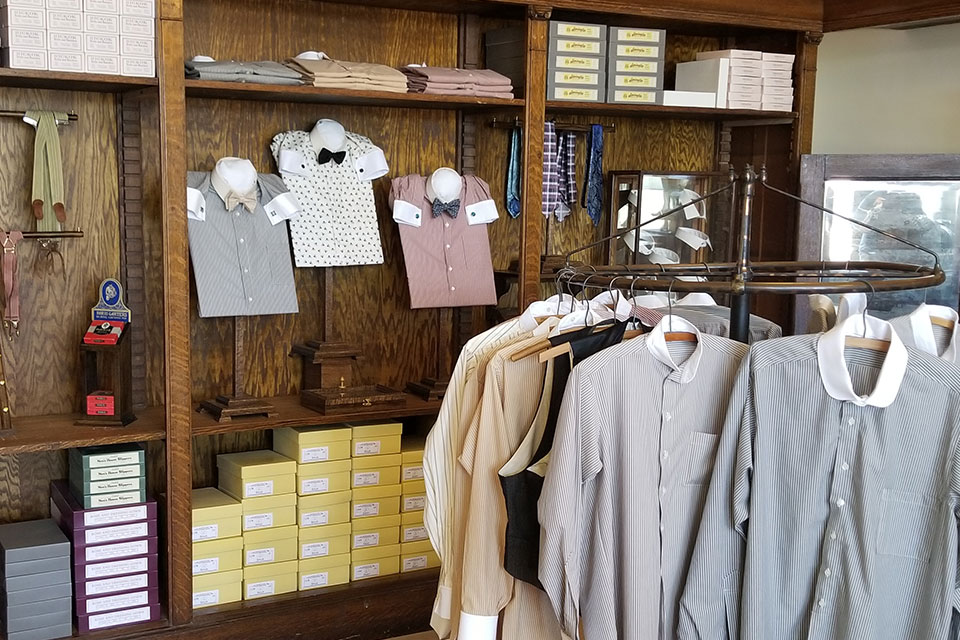 The result is a polished, inviting and interesting escape that lets you explore the Main Street at your own pace and in whatever order you choose. (Currently, one group at a time is allowed in smaller establishments, but during our weekday visit, wait times were minimal and we merely checked out another part of the street before circling back.)

Everyone is sure to have a favorite part of the experience among the 18 locations dotting Main Street and its immediate surroundings, but the soda fountain and candy store promise to be a hit with little ones and parents alike. The theater is fun, too, and even smaller touches like Fire Station #1 and the Ohio Farm Bureau Office, which do not have costumed interpreters on the premises, are crafted with a level of detail that brings them fully alive. One gets the feeling as if the people who work in each place are just about to return, and that’s just the way Erie Sauder would have wanted it. As Debbie Sauder David says, “My grandfather was all about immersive, interactive, real experiences.”