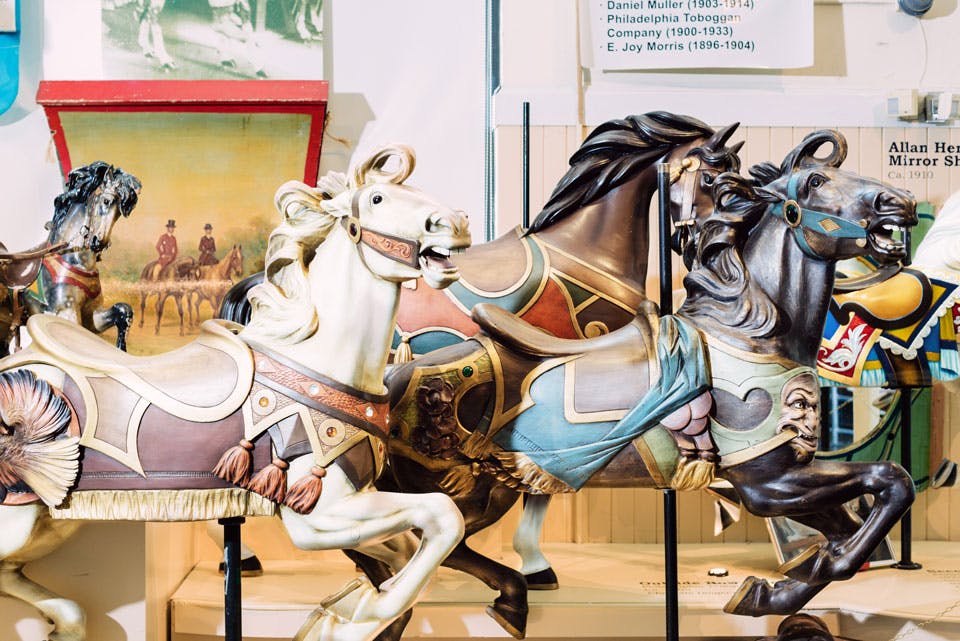 This Sandusky museum traces the golden age of carousels and the craftsmen and styles that defined the era.

English ostrich, a growling gray wolf and rearing horses stand frozen as the sound of a calliope whirs softly in the background. The old wooden ticket booth just beyond the front door recalls carnivals and fairs of days gone by, and the menagerie of creatures displayed along the walls of the Merry-Go-Round Museum span a century of carving styles: Coney Island, Philadelphia, County Fair.

A restored 1939 carousel originally built by the Allan Herschell Co. — a famous New York-based maker of amusement rides — spins daily in the museum’s large rotunda. It’s a delight to visitors but also a reminder that the Sandusky attraction is a living, breathing tribute to the carousel. The concept was born in Europe, but American craftsmen perfected it during the early decades of the 20th century and paved the way for the rides that fill amusement parks today.

“We’re the only museum like this in Ohio,” says curator Kurri Lewis, adding that there are four merry-go-round museums in the nation. “Everyone who comes here gets to ride the carousel, so there’s an entertainment factor that goes along with it.”

The museum is also a place of rebirth for carousel horses and other animals. Weathered pieces are stripped of paint and refurbished, while volunteer on-site carvers create replacement parts. In fact, the museum’s 1939 carousel arrived without any animals, so over the years, volunteers populated the ride with 30, including a restored French child-sized lion and several pieces carved in-house, including a sea monster and a zebra. 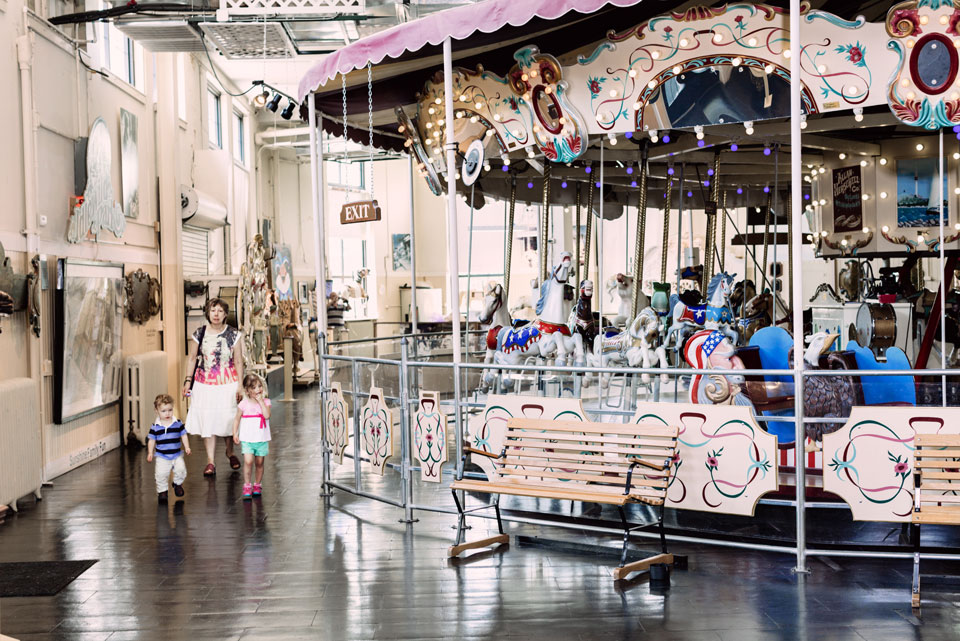 Visitors to the museum are invited to take a spin on the 1939 merry-go-round and browse the historic carousel animals on display. (photo by Casey Rearick)

“They are an art form,” says Lewis, adding that the craftsmanship wasn’t always appreciated. “Instead of these things just being tossed in piles and burnt … [people] wanted to save them. ... Very few people can carve something like these are carved.”

The roots of the Merry-Go-Round Museum stretch back to the U.S. Postal Service’s issuing of four carousel stamps in 1988. Each featured a merry-go-round animal designed by prominent carvers, including the armored horse that was part of Cedar Point’s carousel.

The stamp’s issuing ceremony was held at the northwest Ohio amusement park, with a reception following at the nearby Sandusky post office building — a beautiful structure that had been closed since 1986. Carousel horses were brought in for display, and although just 300 guests were expected at the reception, nearly 3,000 showed up.

Following that outpouring of interest, the group of volunteers who coordinated the reception formed the Merry-Go-Round Museum nonprofit organization and raised money to purchase the post office building. The original exhibits at the museum were pieces curated by the volunteers, including a small Allan Herschell carousel that was eventually replaced by a larger model. The original museum had just 15 animals, and a wishful strategy for growth was put into place in which the museum would acquire two animals from each notable carver. The plan has since grown into a collection of more than 70 carousel animals plus the 30 that populate the Herschell carousel.

At the turn of the 20th century, entrepreneurs built American carousels to capitalize on the traffic brought by trolley lines. Amusement parks began opening across the nation, and different areas of the country began to develop distinct styles of carousel rides to attract visitors.

“We have different criteria in terms of what we accept,” Lewis says of the collection. “The animal has to be from what is called the golden age of carousel, which is 1880 to 1930.”

The museum collects animals in that period’s three styles: County Fair, Coney Island and Philadelphia. County Fair-style animals are typically around 36 inches tall and designed with little detail to allow for portability. The Philadelphia style, developed in Germantown, Pennsylvania, emphasizes the animals’ musculature and detailed manes and typically stand around 5 feet tall. The Coney Island-style animals, gilded with rhinestones and gold or silver leaf, are closer in size to the Philadelphia-style pieces but are set apart by their distinct glamour.

The perimeter of the Merry-Go-Round Museum’s main gallery features examples of these styles as well as and works of noted craftsmen. One of the most unusual pieces is a 4-foot-tall rooster from the early 1900s created by renowned carousel carver Gustav Dentzel. The German immigrant moved to Philadelphia to open a cabinet-making business but ended up following in the carousel-carving footsteps of his father. 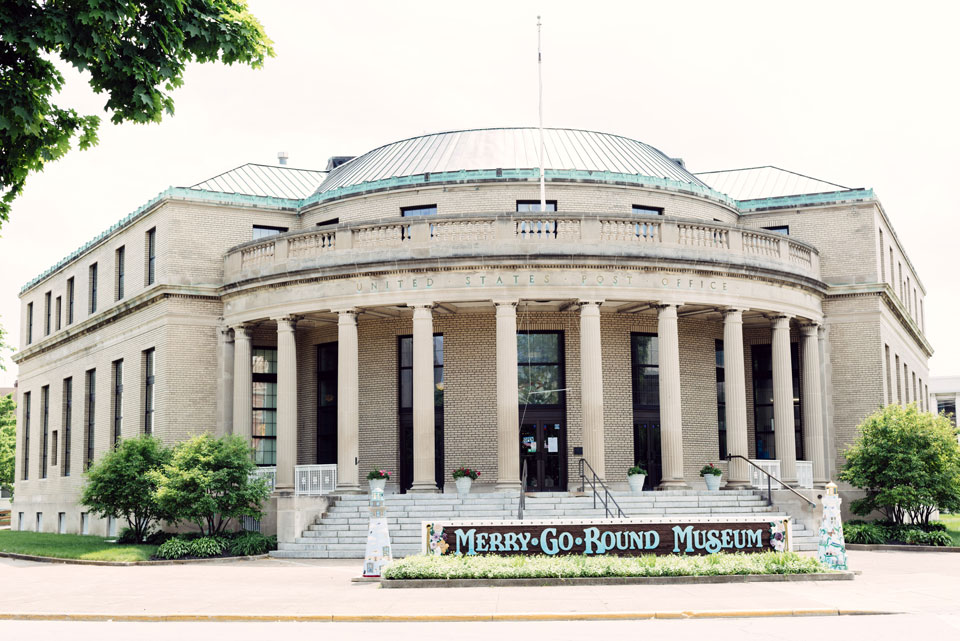 The Merry-Go-Round Museum is housed in the former post office building in downtown Sandusky. (photo by Casey Rearick)

“That’s probably our rarest piece that we have here,” says Lewis, adding that it is one of just a handful of carousel roosters in existence. The museum houses other gems, including a 6-foot-tall Dentzel giraffe from 1910, also in its original paint, and an E. Joy Morris elk from 1900.

“People think that [it’s] an art form that has just died off,” says Lewis, adding that, to this day, there remain American companies that make all-new wooden carousels for amusement parks. “It’s still out there.”

Hovering over a cluttered workbench, Jay Held cuts away excess wood to reveal what will become the calf of a rearing stallion. He smooths over the muscles with his fingertips, brushing off the dust to reveal a soft finish.

“You can’t take too much off,” says Held. But the wood is forgiving, so no chip or cut is likely to ruin the finished product. “You can always fix it, or we adjust accordingly.”

Volunteers like Held do the vast majority of the museum’s restorations. Often, that means stripping old paint from weathered carousel animals. The preferred method is to use a heat gun to peel off the layers, but heavy-duty restoration at times requires the use of an antiques dealer licensed in the process of dipping, which involves dunking the piece into chemicals to remove the paint.

The paint studio is in the museum’s private basement, but visitors can watch carousel animals take shape on the main level. The carvers work with basswood, which is known for its smoothness and lack of grain. “We can put in the detail without the wood tearing,” explains Held. “It doesn’t even feel like wood.”

Held has been carving since 1987, when he was gifted a set of hand-carved pliers at the age of 13. Soon after, he began carving figures such as golfers and Santa Claus.

After restoring a carousel horse of his own, Held decided to share his craft with others. He is one of 10 carvers at the museum who collectively work through approximately five restorations per year. The complete cycle of a carousel-animal makeover takes around three months, and the majority of museum clients are private collectors.

“The biggest challenge is the unknown,” says Held. “You find that, as you’re carving, you think you can’t do it, then you just jump into it and it always works out.”