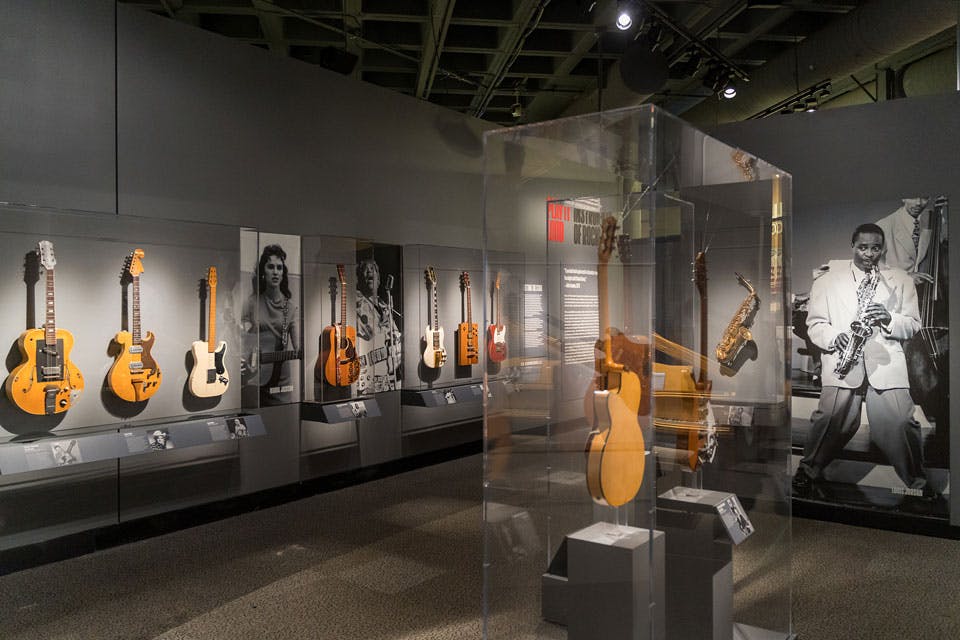 The Rock Hall Rolls On

Commune with music's trailblazers and legends once again, as Cleveland's Rock & Roll Hall of Fame reopens. Here's what to expect.

Architect I.M. Pei’s Rock & Roll Hall of Fame is one of our state’s most recognizable buildings, rising up against the backdrop of Lake Erie. Located in the city where disc jockey Alan Freed first filled the airwaves with music he called “rock ’n’ roll,” the institution has served as a beacon to generations of music fans since opening its doors in 1995.

After closing in March, the Rock & Roll Hall of Fame reopened to the public on June 15, and while new health protocols are in place, visitors can still enjoy the same rocking experience.

Exhibitions on display include “Play it Loud: Instruments of Rock and Roll,” which has been extended through December. Visitors can also take a seat in the Connor Theater for a high-octane montage of great musical moments during the Jonathan Demme-directed compilation “The Power of Rock Experience.”

Greg Harris, CEO of the Rock & Roll Hall of Fame, says the museum is adhering to the health and safety practices outlined by the state of Ohio and the Centers for Disease Control and Prevention, while also reflecting on the decisions made by other museums as they reopen.

“It’s going to take some time for people to get comfortable with that idea of being out and about in groups,” says Harris. “We’re ready when they’re ready, and we’ll provide a safe and clean environment for everybody.”

Exhibitions have been altered to allow more efficient social distancing, and visitors should follow the one-way traffic pattern designated by markings on the floor. Additional protocols to ensure safety include increased cleaning, a health screening and questionnaire process and no interactive displays. This includes the temporary closure of The Garage — an interactive music exhibit where visitors can touch and play real instruments — and the Foster Theater.

Still, there are plenty of ways to enjoy the power of rock ’n’ roll. Recorded performances and music fill the air as you meander throughout the multilevel museum. Starting in July, live music returns to the plaza, featuring performances by a range of local musicians. “From the Vault” exhibits are also available to view online, including some never-before-seen footage from the museum’s archives. The 2020 Rock & Roll Hall of Fame Induction Ceremony set for Nov. 7 at Cleveland’s Public Hall will now be a virtual ceremony airing on HBO on the same date. An exhibition honoring this year’s class of inductees opens Aug. 14.

Another exhibition fans are looking forward to is “It’s Been Said All Along: Voices of Rage, Hope and Empowerment,” set to open July 25. The new exhibition showcases artists and musical moments that have brought about social change and justice. Explore the influence of Rock & Roll Hall of Fame inductees and artists using their voice to fight for equality, from Chuck Berry and Aretha Franklin to Public Enemy, Rage Against the Machine and Beyoncé.

All museum tickets must be purchased online and tickets are timed to limit the number of patrons. Sanitizing stations are located throughout the museum, and both staff and visitors are required to wear a mask.

“Those who have visited the museum already have been blown away and have really had a terrific time,” says Harris. “We are excited to offer that to more people throughout the year.”