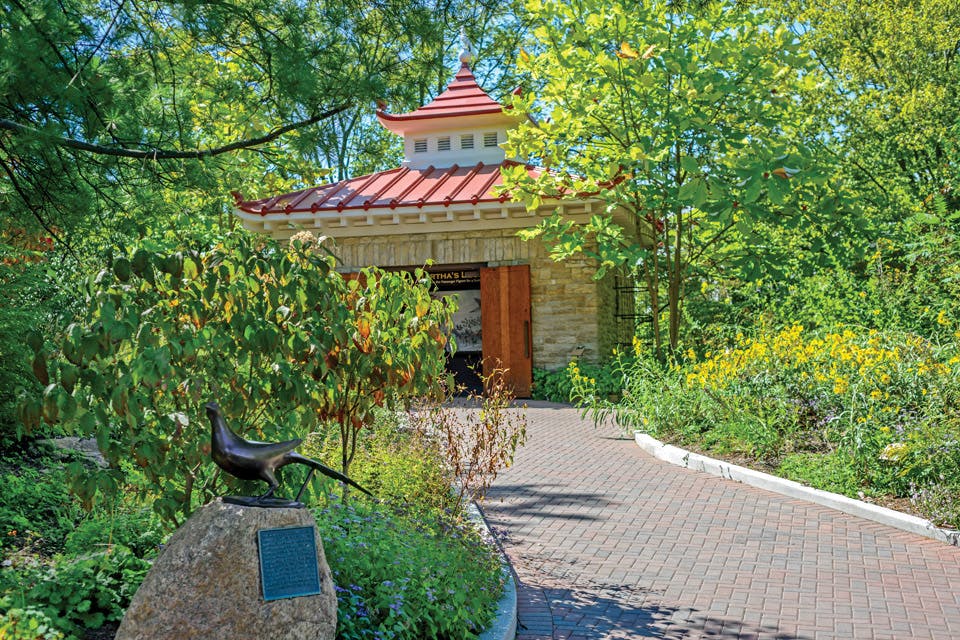 The Cincinnati Zoo & Botanical Garden pays tribute to the last of a species.

Perched atop a boulder along the main path at the Cincinnati Zoo & Botanical Garden, the bronze bird seems to guard the stone pagoda nearby. The statue was crafted in the likeness of a passenger pigeon, and it greets visitors to the building that, in 1914, sheltered the last of the species.

Once one of six nearly identical structures used as aviaries during the early 1900s, the pagoda now serves as a memorial for the extinct bird and is filled with information and artifacts about the plight of the passenger pigeon.

“This was the most commonly known bird in North America,” says Dan Marsh, the zoo’s director of education and volunteer services. “It wasn’t because people were bird-watchers. They ate it.”

A cheap and abundant source of protein, the passenger pigeon was hunted commercially during the 19th century. Such large-scale hunting reduced the birds’ numbers dramatically, and by the time there was a call for conservation, it was too late. The last wild passenger pigeon was shot in 1900.

After that, the birds existed only in captivity. Martha, the bird that would end up as the last living passenger pigeon, initially lived at the Cincinnati Zoo with her partner, George.

He died during the summer of 1910, while Martha lived on until Sept. 1, 1914. She was immediately frozen for transport by train and later preserved. She now resides at the Smithsonian’s National Museum of Natural History in Washington, D.C. Martha last made an appearance at the Cincinnati Zoo when the Passenger Pigeon Memorial first opened in 1974.

“Ironically,” Marsh says, “it may be the first time she ever flew.”