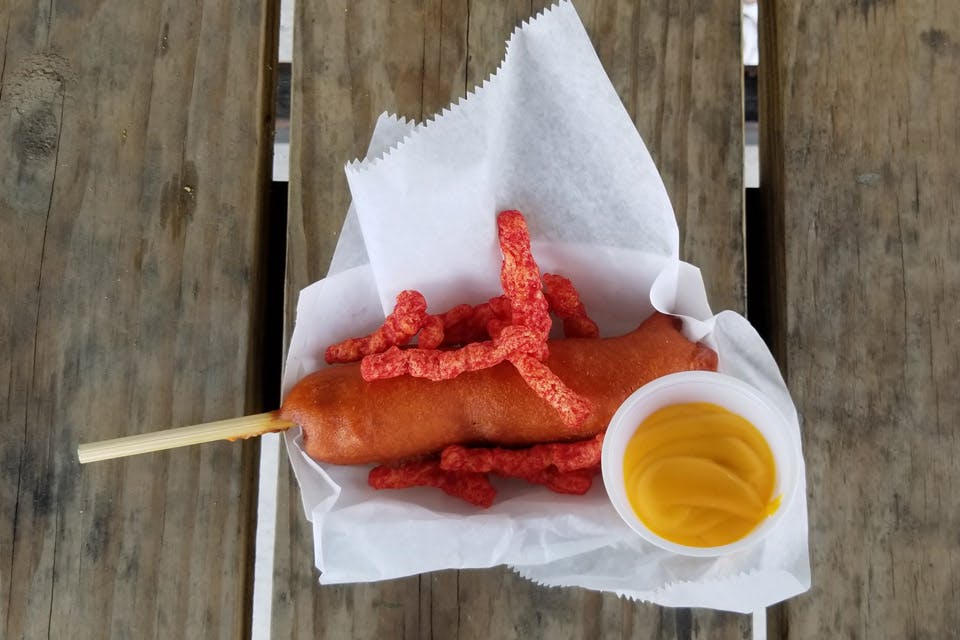 From sandwiches that celebrate our state's farmers to more than three dozen food items new to the fair this year, here's a sampler of what you can dig into.

The arrival of the Ohio State Fair means food — lots and lots of food. The options range from the traditional Ohio shredded chicken sandwich to pretty much anything you can dip in batter and throw in a fryer. We tackled the fair food options two ways: First, we sampled sandwiches at the Taste of Ohio Cafe (featuring pork, beef, lamb, chicken, turkey and dairy options from Ohio farmers.) Then, we looked into the more than three dozen foods new to the fair this year. Here's where to find them and what we thought about the ones we tried. 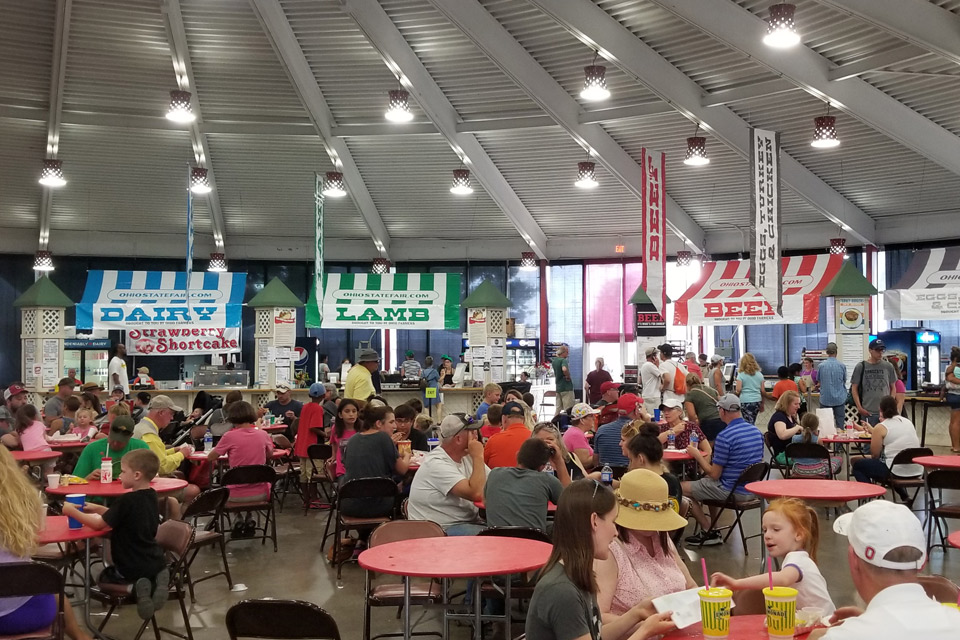 Taste of Ohio Cafe
Farming has been at the core of the Ohio State Fair since its inception in 1850, but it wasn’t until 1993 that fair-goers could try locally sourced dishes served up by associations representing our state’s beef, chicken, pork, lamb and dairy producers. The Taste of Ohio Cafe offers a wide range of options ranging from Hickory-smoked brisket to Ohio’s famous hot shredded chicken sandwich. You can even grab a glass of Ohio wine or an Ohio-made domestic or craft beer to enjoy with your meal in the air-conditioned space that’s always a big draw for fair-goers. Here are three sandwiches we recommend. 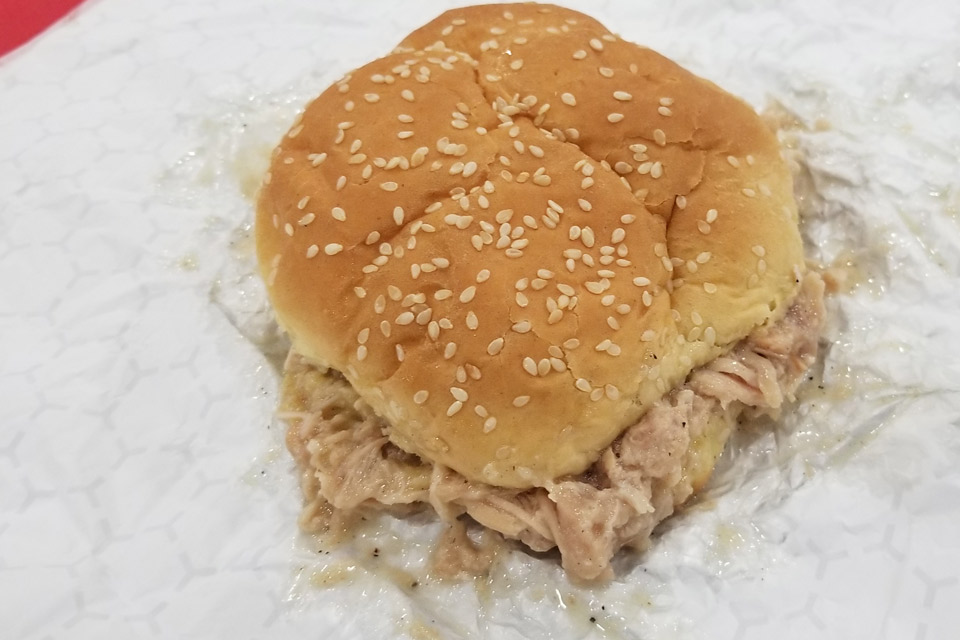 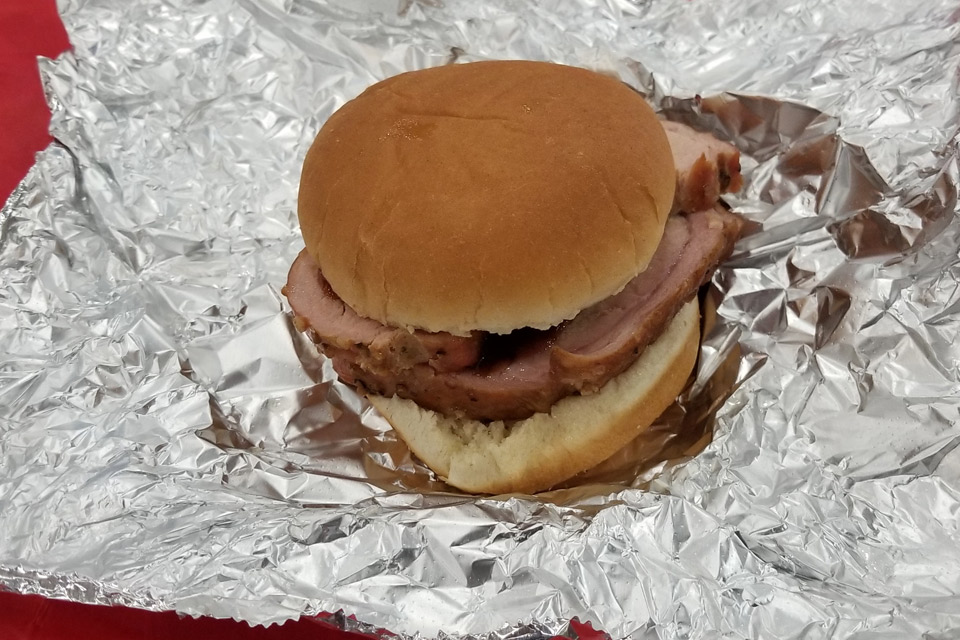 Pork Loin Sandwich ($5): This Ohio Pork Council sandwich features two thick pieces of pork loin on a bun. Drizzle it with barbecue sauce or enjoy it without. You can’t really go wrong either way. 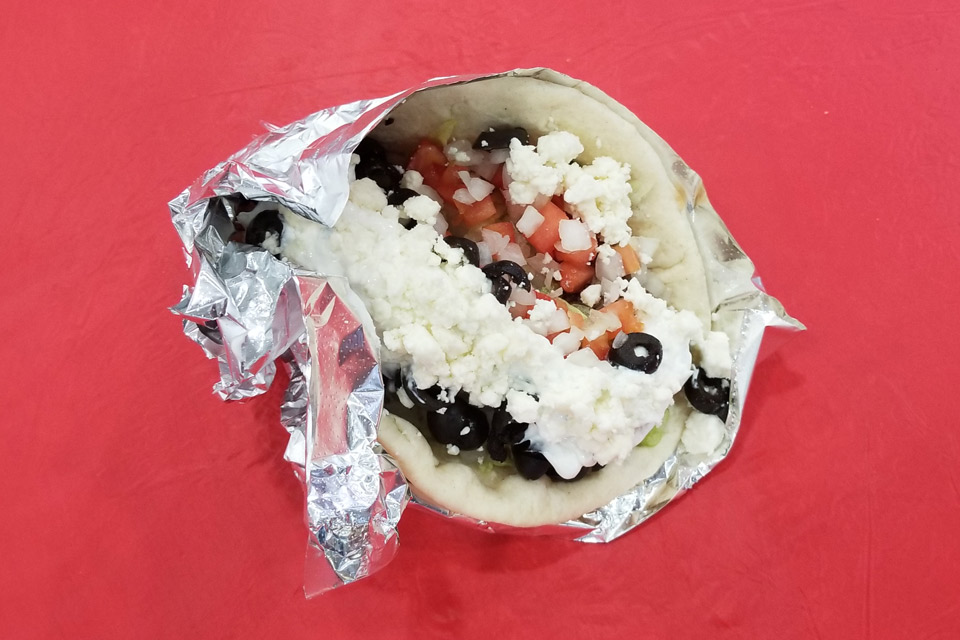 My Big Fat Greek Gyro ($11): Sure, it’s the priciest of the three options sampled, but the Ohio Sheep Improvement Association’s gyro delivers. The lamb meat is shredded versus shaved and served with olives, feta cheese, tomatoes, tzatziki sauce and lettuce stuffed into a pita.

New Fair Foods
There are more than 40 new foods offered at the Ohio State Fair this year. We know you have your perennial favorites, but it's also fun to branch out (especially when a Flamin' Hot Cheeto Corn Dog is among the new arrivals). Here’s our rundown on the nearly three dozen new food finds and our take on the ones we tried.

It may help to download the Ohio State Fair map here. The food finder on the state fair website can also help you locate the treats featured below. 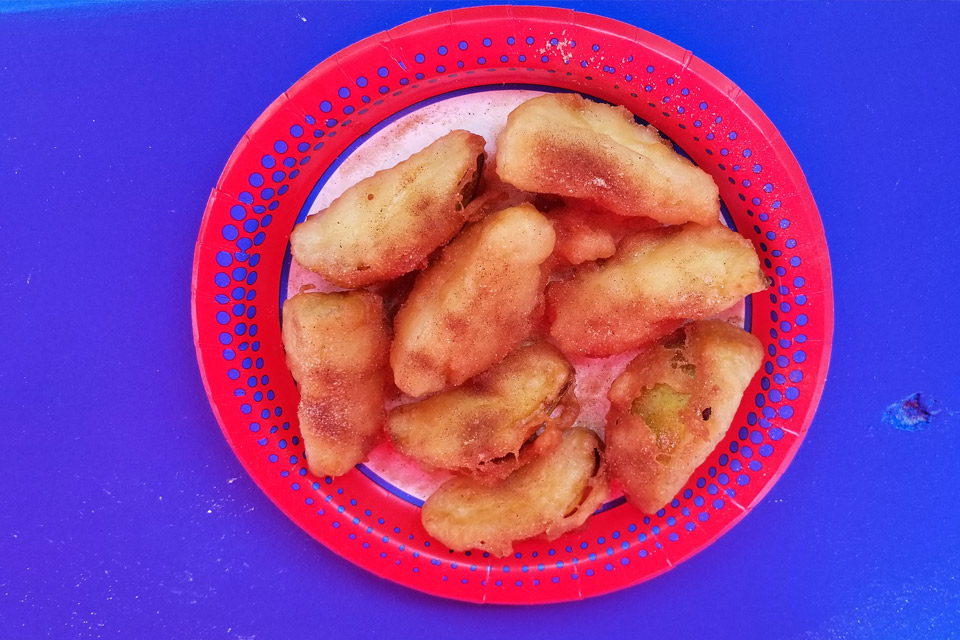 Apple Fries
Marshal Family Farm, west of Kasich Hall entrance
These are more apple wedges than fries, and they’re cooked fresh to order so plan to wait a few minutes. But these eight Granny Smith wedges were perfectly prepared and deliver a delicious punch of apple flavor. (Just be careful. They are hot!)

BBQ Chicken Nachos
Dre's Place BBQ, west side of Nationwide Donahey Land & Living Building
Chips and cheese are great, but how about amping it up with some smoky barbecue chicken? Yes, please.

Breakfast Wraps
KG Concessions, near Taste of Ohio Cafe and ShowPlace Pavilion
A solid breakfast will get you fueled up for exploring the fairgrounds, and these wraps featuring traditional breakfast-time ingredients will do the trick.

Brisket Nachos
Dre's Place BBQ, west side of Nationwide Donahey Land & Living Building
Again, we love chips and cheese, but dumping some brisket over top just makes it so, so much better.

Buckeye Funnel Cake
KG Concessions, near Taste of Ohio Cafe and ShowPlace Pavilion
Deep-fried buckeyes are a fair tradition, but this year a buckeye funnel cake is on the menu, too. A chocolate-and-peanut-butter mixture is topped with powdered sugar and — drumroll, please — served on a funnel cake in the shape of Ohio.

Caribbean Noodles and Jambalaya Rice
Giuseppe's Concessions, west side of Nationwide Donahey Land & Living Building
These noodle and rice dishes feature chicken, pork or vegetables and are cooked in a wok in front of fair-goers. Order a bubble lemonade to wash it down.

Chicken Philly Sandwich
Provenzale, WNCI Food Highway on west side of WCOL Celeste Center Entrance
Sure, it hails from Pennsylvania but this Ohio twist subs chicken instead of beef in the city of Philadelphia’s classic, cheesy creation.

Chocolate Candy Bar Shish Kebab
Bulk Candy Store, near 17th Avenue across from Brown Sheep Building and east side of Lausche Youth Center
Enjoy a mix of assorted candy bars — skewered, battered and deep-fried for an easy-to-hold treat that will keep you guessing what candy your next bite will reveal.

Cold Brew Coffee
Sweet Shop, Bricker Marketplace Building Food Court
We know you need your caffeine fix. Heres how to get your pick-me-up in the form of a refreshing drink that'll help you beat the heat.

Corny-Kabob
AWB Concessions, west of Shoppes at North Commercial
Created with alternating layers of hot dog and cheese, this out-of-the-ordinary kabob is hand-dipped and fried to create yet another twist on the traditional corn dog.

Deep-Fried Charleston Chews
Bulk Candy Store, near 17th Avenue across from the Brown Sheep Building and east side of Lausche Youth Center
You know the classic candy: chewy vanilla-flavored nougat topped with chocolate. But have you ever had it dunked in batter and deep fried? That's what we thought.

Deep-Fried Corn on the Cob
Glo Concessions (WNCI Food Highway north of WCOL Celeste Center near Main Street Stage) and Marshal Family Farm (west of Kasich Hall entrance)
Our state's star summer crop gets the deep-fried treatment. The good news: It is ever-so-slightly healthier for you than deep-fried candy bars.

Deep-Fried Mac & Cheese Balls
The Tot Spot (Fun Time Foods), north of Nationwide Donahey Land & Living Building
Are you noticing a trend here? The deep-fried parade of options continues with the arrival of mac & cheese balls. You have some walking to do anyway, right?

Deep-Fried Mac & Cheese on a Stick
First National Bank of Hot Dogs (S&C Concessions), east side of Giant Slide
Sure you could eat them with your fingers, but when fried mac & cheese makes the jump to a stick it becomes much more portable.

Deep-Fried Mini Gummy Burgers
Bulk Candy Store, near 17th Avenue across from the Brown Sheep Building and east side of Lausche Youth Center
We know the Ohio State Fair has served deep-fried gummy bears before, but these mini gummy burgers turn a new corner in culinary creativity. They are battered, deep-fried and served with Fruity Pebbles cereal on top, making for a jelly-filled-doughnut feel.

Deep-Fried Tofu
KG Concessions, east of ShowPlace Pavilion
Soybeans are a staple agricultural crop in Ohio, so why not go for something that celebrates it: cubed, deep fried and served with salsa.

Edible Cookie Dough
Wonderland Cookie Dough, north end of Meijer Kiddieland near Central Park
We know, we know, eating cookie dough from the tube is a health hazard (but we've actually done it and lived to tell the tale). No need to worry here. This stand serves edible cookie dough in flavors such as M&M, chocolate chip, birthday cake and cookies & cream 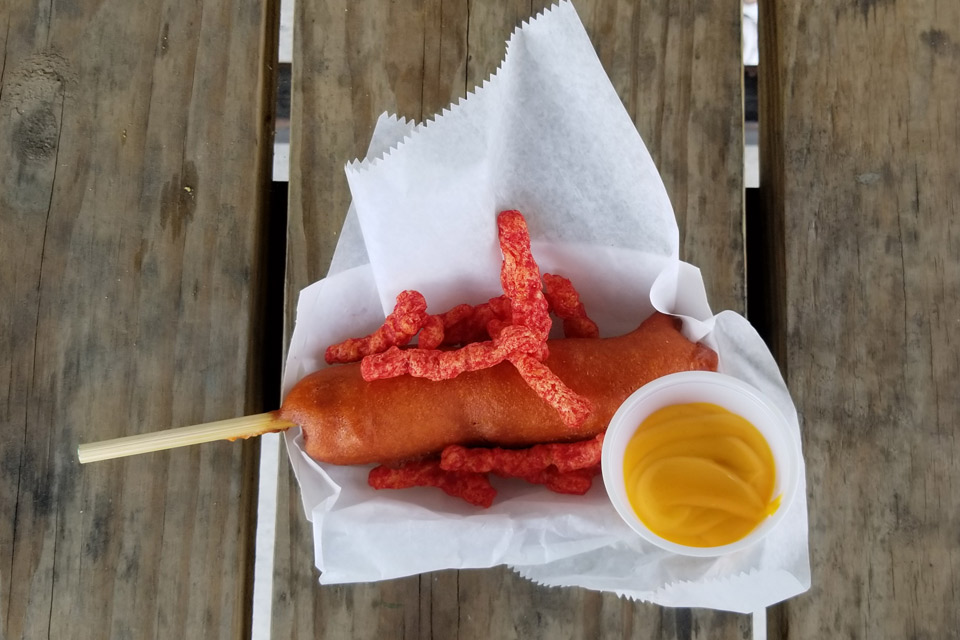 Fried Jalapeno Rings
KG Concessions, near Taste of Ohio Cafe and ShowPlace Pavilion
The perfect marriage of crunch and heat comes to the Ohio State Fair in the form of these spicy jalapeno rings coated in batter and deep-fried.

Frozen Buckeye Cheesake & Frozen White Chocolate Oreo Cheesecake
Maggie's Sundae in a Cone, WNCI Food Highway, southeast corner of Bricker Marketplace Building
If you've never had a piece of frozen pie dipped in chocolate before your eyes and handed over to you on a stick, you're in the right place.

Nitro Coffee
Eaton Cookies, west side of Nationwide Donahey Land & Living Building
Need a morning or mid-afternoon pick me up? Go for this handcrafted cold brew infused with nitrogen (smooth!) and served fresh from the tap.

Philly-Style Soft Pretzels
Big G's, west side of Nationwide Donahey Land & Living Building
So, we've already given Philly cheesesteaks the green light for the Ohio State Fair. Now try this pretzel that serves as a base for a bunch of Philly-inspired toppings.

Pigs in a Blanket on a Stick
First National Bank of Hot Dogs (S&C Concessions), east side of Giant Slide
Just like it sounds: Hot dogs and cheese are wrapped in dough, cooked to golden perfection and served on a stick.

Pulled Pork or Chicken Sundae
Famous Gabby's, west side of Ag-Pro Companies Taft Coliseum
Built on a bed of french fries and baked beans, you can opt for pulled pork or chicken with coleslaw.

Specialty Grilled Cheese
the Giddy Piggy, west side of Nationwide Donahey Land & Living Building
With flavors such as spaghetti, buffalo ranch chicken and Thanksgiving, these grilled cheese creations go far beyond the simple squares your mom used to make for you. 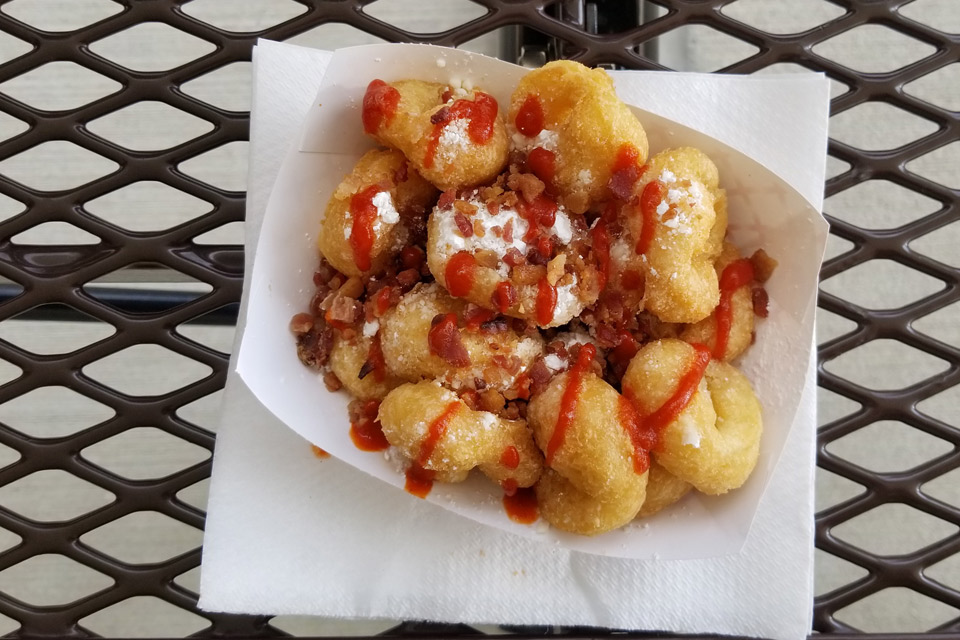 Sriracha Bacon Maple Donuts
Inky Dinky Donuts, east side of WNCI Food Highway on the corner of 17th Avenue across from the sheep barn. (Note: The Ohio State Fair program says these are Sriracha Peanut Butter Crunch Donuts, but Inky Dinky Donuts told us they are making these instead.)
Sweet-and-savory doughnuts have become a trend, and this food stand serves its version by adding some heat to the equation. A pile of tiny fried doughnuts are piled into a boat and topped with a drizzle of Sriracha, bacon and maple. It’s an unusual mix, and its success probably depends on how culinary adventurous you tend to be.

Strawberry Lemonade, Cucumber Lemonade and Raspberry Lemonade
First National Bank of hot Dogs (S&C Concessions), east side of Giant Slide
Why should lemons have all the fun. Choose from sweet strawberry, tart raspberry or refreshing cucumber.

Whisky BBQ Jerky
iJerky Guy, Bricker Marketplace Building, Bay 301
From the guy who brought you sake jerky — keep an eye out for this smoky whiskey BBQ jerky that conjures the flavors of a backyard cookout.

For more information about the Ohio State Fair, which runs through Aug. 4, visit ohiostatefair.com.