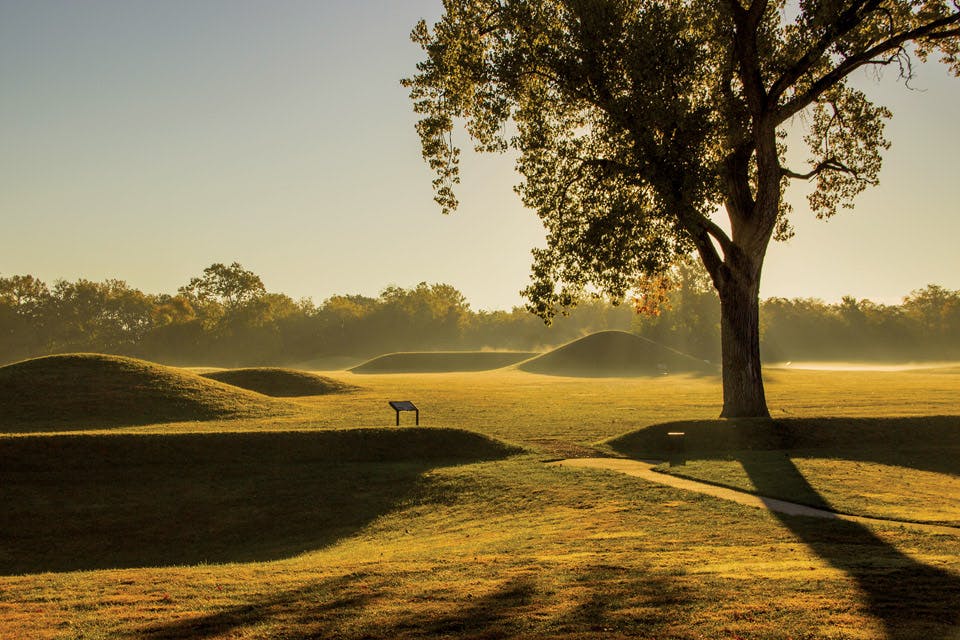 Our state’s Hopewell Ceremonial Earthworks have been nominated for recognition as a World Heritage Site. Explore these elaborately designed places where Native Americans once gathered.

In October and November of 1972, the General Conference of the United Nations Educational, Scientific and Cultural Organization met in Paris to draft the World Heritage Convention, an agreement aimed at documenting a plan for nature conservation and the preservation of cultural properties around the globe.

The idea was to define the kind of natural and cultural sites that could be considered for inclusion on a World Heritage List. Since then, more than 1,000 properties have been recognized, including the Galapagos Islands in Ecuador, the Palace and Park of Versailles in France and the Taj Mahal in India, along with scores of sites that are lesser known but incredibly culturally significant.

Scattered along the scenic Scioto River, geometric earthworks rise from the grounds inside Hopewell Culture National Historical Park. Built more than 2,000 years ago, six earthworks complexes have been preserved to reveal the burial traditions, religious beliefs, ceremonial customs and dynamic social and political makeup of the Native Americans who once gathered at the Scioto River and Paint Creek valleys.

This Ross County site includes the High Bank Earthworks, Hopeton Earthworks, Hopewell Mound Group, Mound City Group, Seip Earthworks and Spruce Hill Earthworks. Named after the man who owned the property where the earthworks were discovered, Hopewell Culture National Historical Park attempts to shed light on a people about which there still remain many mysteries.

The 17-acre Mound City Group tells the story of how the land was used, with 23 mounds that reach up to 90 feet in diameter and up to 17 1/2 feet in height and represent different buildings within the culture. Elaborate mortuary sites are found within the 2 1/2-mile-long wall that encloses Hopewell Mound Group’s 29 burial mounds, which contain materials that originated miles and miles away.

Visitors are able to become an archaeologist for the day thanks to interactive tours that take place over the summer, and the on-site museum showcases authentic copper work, pottery, shell bead necklaces and animal pipes found in the Mound City Group. Educational tours illuminate how the Native Americans who lived here hunted, what crops were cultivated and what tools were constructed to build the larger-than-life landmarks they left behind. 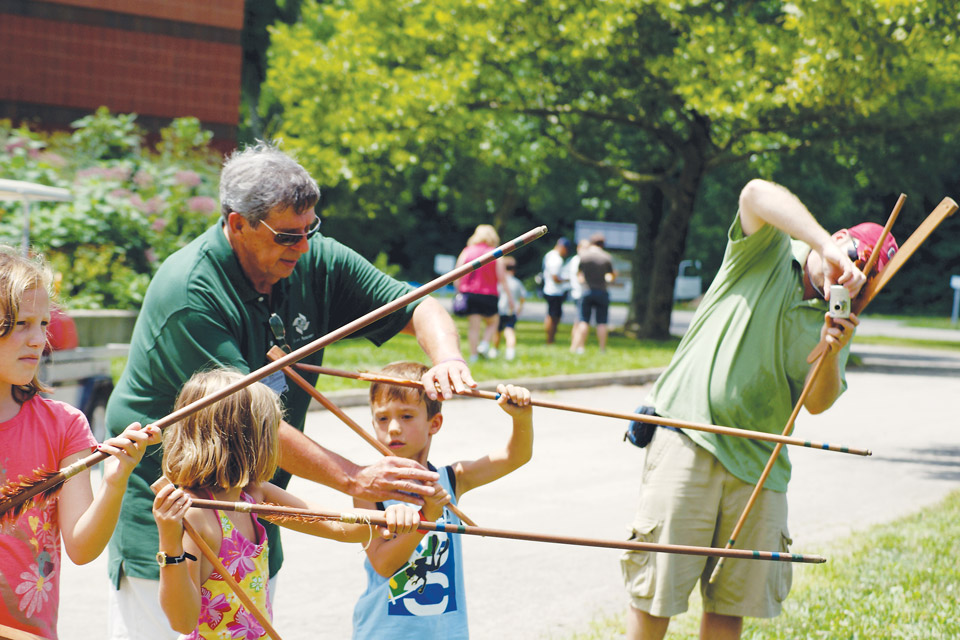 Southwest Ohio is home to the largest and best preserved ancient hilltop enclosure in the United States, where 18,000 linear feet of earthen walls were built between 100 B.C. and 290 A.D. Native Americans used nothing more than deer and elk shoulder bones, clamshell hoes and digging sticks to move the approximately 550,000 cubic yards of soil required to build the earthen walls at the Warren County site, which is located in Oregonia, about 70 miles west of Hopewell Cultural National Historical Park.

To comprehend this enormous feat that took 19 generations to complete, historic site manager and archaeologist Jack Blosser calculated that if the earthen walls were destroyed and put into commercial-grade dump trucks (each carrying 15 to 20 tons of soil) placed end to end, the dump trucks would stretch over 200 miles. Not only did the Native Americans who lived here accomplish an incredible feat of construction, the four circular mounds within the walls accurately predict the 18.6-year lunar cycle.

“With the help of planetarium directors, we found that if you were to stand at a specific mound and wait for the sun or moon to come up at a specific opening in the earth wall, you would have a calendar system,” says Blosser.

Exploration of the site is open to visitors, with extensive self-guided and large-group tour programs, interactive educational programs, a 9,000-square-foot museum space and a hands-on classroom. Over the summer, visitors can expect experiential learning opportunities such as fossil camps, gardening for butterflies and hummingbirds, geological excavations for rocks, archaeological-based digs, glacier workshops and discovery hikes. 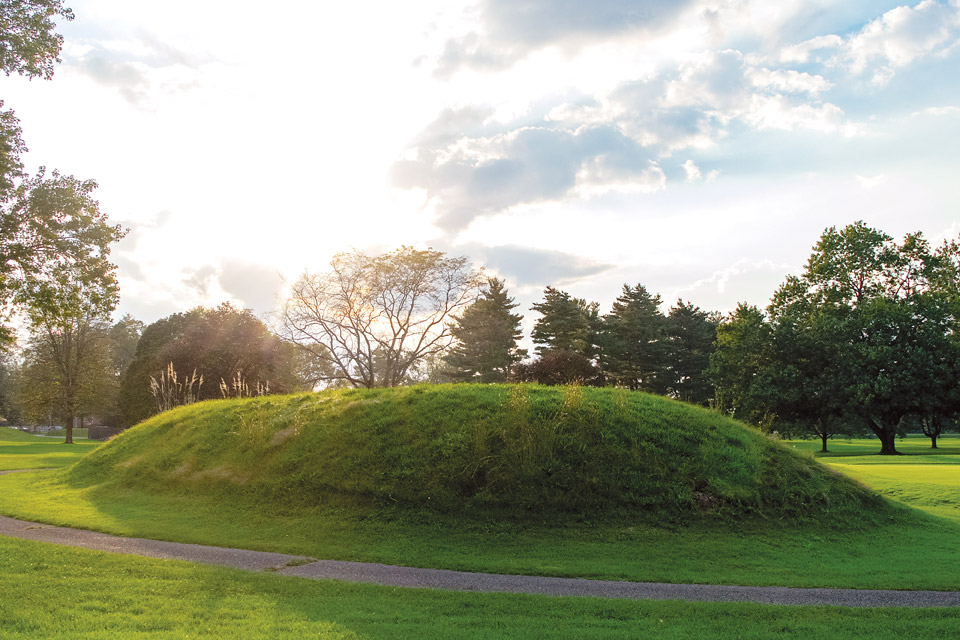 They look like crop circles from the sky, but the giant octagon and circle-shaped earthworks in Licking County, around 70 miles north of Hopewell Cultural National Historical Park, reveal blossoming technology and a masterful use of astronomy and geometry among the Native Americans who resided at the Newark Earthworks more than 2,000 years ago.

Built between 100 B.C. and 400 A.D., the Great Circle Earthworks at the site are 1,200 feet in diameter with walls of between 5 and 14 feet surrounding a moat of between 8 and 13 feet deep. Also located at the site, the Octagon Earthworks enclose 50 acres of land, with each of the eight walls reaching 550 feet in length and 5 to 6 feet in height. The complex’s purpose was to record the complicated rising and setting cycles of the moon and tracks the 18.6-year lunar cycle.

“This is a unique site where you can connect with a people across 2,000 years and move through the process and site with them,” says Tim Jordan, historic site group leader and site manager. He explains that 90 percent of the Great Circle Earthworks have original remains while the Octagon Earthworks has between two-thirds and three-fourths of its initial framework.

“People are always astounded by the size, they’re so much larger than what people expect or see in photos,” says Jen Aultman, World Heritage director for the Ohio History Connection. “It’s a scale that people can’t imagine was built just one basketful at a time.”

Tours of the geometric earthen enclosures are available all summer with a variety of programming scheduled, while the Great Circle Museum offers insight into the history, culture and customs of the Native Americans who lived here.

“The museum offers descriptions of the lunar alignments, maps that overview the Newark [Earthworks] completion,” Jordan explains. “[There are] exhibits that talk about culture and highlight American Indian sites in sister regions and timelines that lay out the cultural achievement of these early American Indians compared to other parts of the world.” 455 Hebron Rd., Heath 43056, 740/344-0498, ohiohistory.org