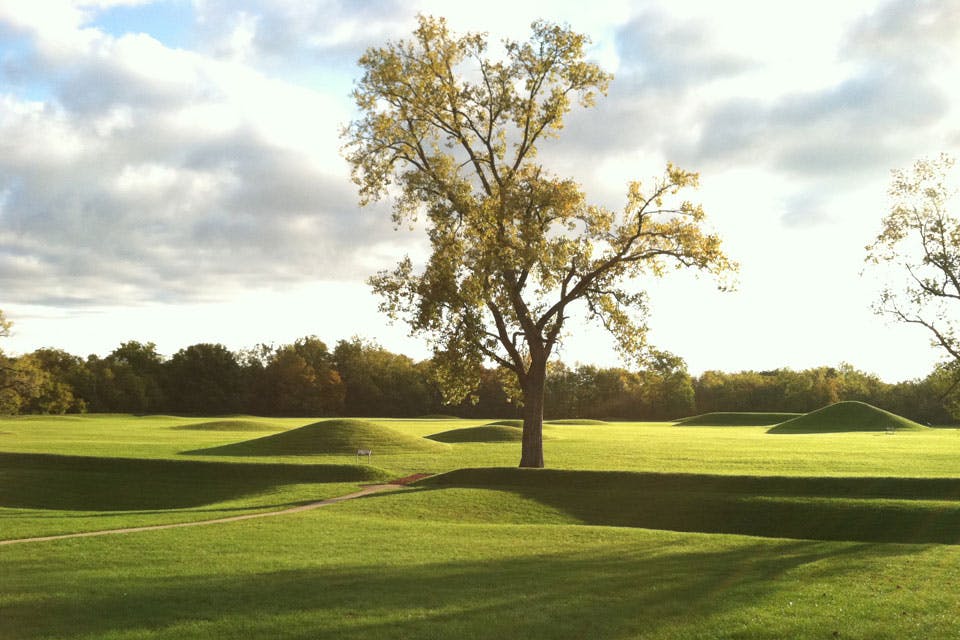 Ross County offers a glimpse into the lives of those who first called Ohio home.

Most of us know more about Native Americans associated with the West than we do the early people who lived in our home state. But we can change that oversight by visiting a host of cultural destinations in our own backyard that bring their stories to life.

Ross County is home to historic sites dating back more than 2,000 years. The Adena culture (800 B.C. to A.D. 1) and the Hopewell culture (considered to be the apex of that prehistoric Native American group) built ceremonial mounds and monumental earthworks.

The geometric shapes were prominent north and south of what is today the city of Chillicothe in Ross County, and the Hopewell people created thousands of mounds in Ohio, according to Susan Knisley, park ranger and education technician for the Hopewell Culture National Historical Park.

“But 80 percent of the mounds have been lost. Our hope is that when people learn about the ones we have, they will want to preserve them,” says Knisley, who classified these three archaeological sites in Ross County as don’t-miss destinations.

This 13-acre site has 23 mounds, all dome shaped except for one that is elliptical. The Mound City Group visitor center offers an educational film, exhibits and artifacts. Of the six parts of the Hopewell Culture National Historical Park, this is the only one that has rangers to answer questions about the cultures and earthworks. The others are either self-guided tours or accessible only with a permit.

“This is the only site to see fully restored mounds,” says Knisley. “The other sites are important in their own right, but they are only pieces and parts of mounds that have been under agriculture for 200 years. Here, you see the builders’ expertise in their engineering and what it was like 2,000 years ago.”

This is the largest of the six mound sites. It is estimated that the enclosure walls were originally 35 feet wide at the base of the earthwork and enclosed 111 acres. Its general shape is a parallelogram about 1,800 feet long on the east and west sides and 2,800 feet long on the north and south. “The walls are pretty impressive,” says Knisley. “You can’t find them anywhere else in the world and that’s why we are a national park.”

This site also inspired the name of the culture. No one knows what the Native Americans who lived here thousands of years ago called themselves. But when the land was excavated in 1891 and 1892, it was a farm owned by a dry goods merchant and former Confederate Army soldier named Mordecai Cloud Hopewell.

The name Adena also does not refer to a particular tribe. The Adena Mound located on the estate of Gov. Thomas Worthington in Chillicothe was named after the Adena Mansion property on which it is located and became the name applied to the entire culture.

Originally, the Seip Earthworks consisted of a 2-mile embankment wall — in some places 10 feet tall — enclosing more than 120 acres that were shaped in two huge circles and a square with astronomical significance.

“All the earthworks in Ohio were ceremonial, and some were burial mounds and others contained artwork,” says Knisley. “But some were places where people gathered to watch different events of the sun and moon.”

Much of the Seip Earthworks was destroyed when land was cleared for farming, but a reconstructed mound and part of a reconstructed wall are visible to visitors today. In October 2014, the Seip Earthworks was rededicated after the land became part of the National Park Service. Chief Glenna Wallace of the Eastern Shawnee Tribe of Oklahoma spoke during the dedication, tracing her tribe’s ancestry to its roots in Ohio.

As night begins to envelop the 1,800-seat Sugarloaf Mountain Amphitheatre, 56 actors and a dozen horses prepare to tell the story of Tecumseh. Torches are lit, flintlocks are loaded and the recounting of the Shawnee leader’s fight to save his people’s Ohio homeland during the late 1700s unfolds just as it has every summer for more than four decades.

The drama, written by Emmy recipient Allan W. Eckert, was first performed here in 1973, and since then, more than 2.5 million people have experienced “Tecumseh!” and its honest depiction of the violence and brutality that accompanied Tecumseh’s fight.

“The big battle is the signature scene, and some of the other scenes are graphic and bloody as well,” says Brandon Smith, CEO of The Scioto Society, which was formed in the early 1970s as a way to create economic development in the region.
“I like the scene when Tecumseh’s brother has died and it shows how the death has affected him. It’s the hinge moment.”

Smith suggests that the drama, which runs June 5 through Aug. 29, is most suitable for adults and children ages 6 and older. He also recommends the one-hour, behind-the-scenes tour for children (an additional charge applies). The tour’s demonstration of stunts and firearms helps children understand that what they see on stage is a carefully choreographed performance.

A new addition to “Tecumseh!” for this season is bistro-like table-and-chair seating at the top of the amphitheater. But the tale remains true to what audiences first watched on stage during the summer of 1973.

“One year the writer suggested we make some changes,” recalls Smith. ”And we said, ‘No. Everyone wants it to stay the same.’ ”