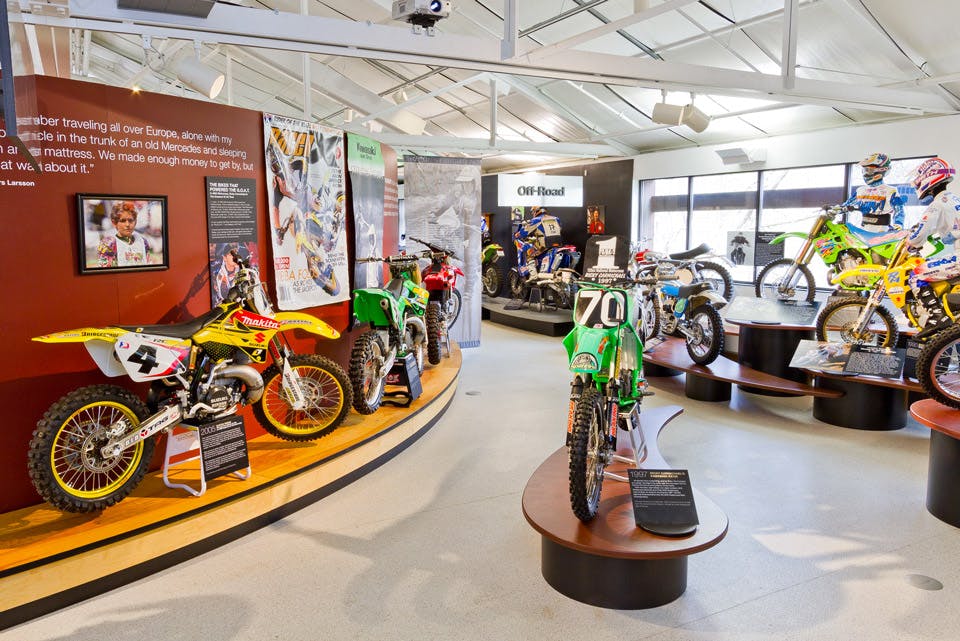 Follow U.S. 40 through Ohio and you’ll find destinations that celebrate art, science and even motorcycles.

The National Road was built for explorers. Started in 1811 in Cumberland, Maryland, it cleared a path for westward expansion and facilitated the growth of a young country by opening up more land for settlement and creating an easier route for travel and trade. Today, U.S. 40 is still a route ripe for discovery, with plenty of spots for modern pioneers to visit. Through Ohio, the National Road links a number of museums located along or near the historic route. They provide the perfect opportunity for today’s National Road travelers to do a little exploring, too.

Dayton Art Institute
This nearly century-old institution is home to works from Africa, China, Japan, India, Europe and America. Painting, sculpture and photography are mainstays of the collection, but the museum also explores other mediums. “I did a show this summer called ‘Dayton Celebrates Glass,’ ” says chief curator Aimee Marcereau DeGalan. “[It was] an overview of studio glass from its origins to present-day artists … and it was the highest-attended show that we’ve had in the last five years.” The museum also works to make art more accessible with its Curatorial Conversations program. “One of us will talk very informally in front of an object with a small audience,” says Marcereau DeGalan. “Afterward, we go have a glass of champagne and continue conversation.” 456 Belmonte Park N., Dayton 45405, 937/223-5277, daytonartinstitute.org

Springfield Museum of Art
What started as an art center offering classes in 1952 became a museum in 1967 and has undergone several renovations, including a major addition in the 1990s that added seven galleries. “We’re an American art museum with a strong focus on Ohio artists,” says executive director Ann Fortescue. In addition to works by Gilbert Stuart, Rembrandt Peale, John Sloan, George Inness, Henry Ossawa Tanner and Margaret Bourke-White, the museum showcases creative Ohioans, including paintings by Springfield brothers John, Gustavus and Godfrey Frankenstein, plus Frank Myers Boggs and Henry Church Jr. “We have an exquisite still life by Edward Edmondson Jr.,” says Fortescue. “He was very active in the Cincinnati art scene at a time when it was one of the major centers of art in the Midwest, in the late 19th century.” 107 Cliff Park Rd., Springfield 45504, 937/325-4673, springfieldart.museum

COSI
The Center of Science and Industry marked its golden anniversary last year by unveiling its new 211-seat COSI planetarium. But getting lost in space is just the start of what visitors can experience here. COSI offers its guests hands-on opportunities to learn about a range of scientific principles. This spring, inquiring minds are put to the test with “Top Secret,” a spy-themed exhibition that opens March 14. “It’s sort of this James Bond spy story they immerse you in,” says project manager Josh Kessler. “There’s a whole bunch of code breaking, there’s a night-vision exhibit, there’s a spot where you have to intercept communications from a spy satellite.” Afterward, visitors can browse items from the real world of espionage, including authentic World War II and Soviet artifacts. 333 W. Broad St., Columbus 43215, 614/228-2674, cosi.org

Ohio History Center
“If it’s just a bunch of dates, you’re doing it wrong,” says Jackie Barton, the Ohio History Connection’s director of museum and library services. The Ohio History Center is clearly doing it right with its broad collection of artifacts that covers the state’s story from the ice age to the present, including exhibits depicting Ohio’s native cultures. The lessons become interactive with a walk back in time through a fully furnished 1950’s Lustron house and a gallery of genuine Civil War flags that regiments from across the state carried with them on the battlefield. “If you come when the interpreter is opening the storage case, you get to see what those flags went through,” says Barton. “You can smell campfires and gunpowder. You can smell the Civil War.” 800 E. 17th Ave., Columbus 43211, 614/297-2300, ohiohistory.org

Columbus Museum of Art
This museum is a must for fans of European and American modernist works, folk art and photography. Visitors can see art from Pablo Picasso, Edgar Degas, Henri Matisse and more. The museum is also home to one of the largest collections of Photo League photography. Interest in the mid-20th century New York group’s work sparked a museum collaboration with the #JJ Instagram community. “#MobilePhotoNow” runs through March 22 and features 320 images captured on mobile devices. “This is the largest mobile-photography project anyone has ever tried in an art museum,” says executive director Nannette Maciejunes. “We received 45,000 photographs from 5,000 photographers, 80 countries and five continents.” 480 E. Broad St., Columbus 43215, 614/221-6801, columbusmuseum.org

Motorcycle Hall of Fame Museum
The American Motorcycling Association’s museum in Pickerington strives to share a more complete picture of motorcycling than the image conjured by the word “biker.” Every year, the organization hosts an induction ceremony and adds new bikes to the collection, representing styles such as desert racing, road racing, motocross, ice racing, stunt riding and more. The museum features more than 120 bikes, each with a story related to a hall of fame member. A rare Harley-Davidson racing bike, for example, tells the story of its owner, Cal Rayburn — an underdog when he arrived in Europe to compete in and win the 1972 Transatlantic Match Races. “It’s not just the motorcycles,” says Jeff Massey, chief operations officer. “It’s really about the people.” 135155 Yarmouth Dr., Pickerington 43147, 614/856-2222, motorcyclemuseum.org

Zanesville Museum of Art
Zanesville has a history shaped in part by the area’s natural clay deposits. It’s a past that is reflected in this institution’s impressive collection of American pottery, much of it from local and regional potters. The museum’s collection also includes European paintings, American portraiture, Asian sculpture and African masks. One of the spaces, the Hatton Gallery, is a work of art in itself. “Originally, this was from Hatton Gardens, a 17th-century London estate of Sir Christopher Hatton, lord chancellor under Queen Elizabeth,” says executive director Laine Snyder. “This room was taken apart and shipped to New York by the Hearst family in the 1920s … Mr. [Edward] Ayers, our patron, ended up buying it in 1940 and had that whole room installed [here].” 620 Military Rd., Zanesville 43701, 740/452-0741, zanesvilleart.org

Belmont County Sheriff’s Residence Museum
From 1888 until 1976, Belmont County’s sheriffs and their families called this residence home. Later, the building served as sheriff’s department offices, but the property stood vacant for years, until a grant provided the funds to restore the home as a local history museum. Communities across Belmont County supplied artifacts specific to their town’s history: portraits, uniforms, glassware, clothing and more. There are even several model boats, including a depiction of the USS Constitution, a 1797 naval vessel named by George Washington. “Josiah Fox was born in England, but moved to America. He eventually settled in Belmont County,” says Andrew Kirkland, the museum’s curator. “He worked as an assistant under Joseph Humphreys, who helped construct [the USS Constitution].” Opens April 2. 101 E. Main St., St. Clairsville 43950, 740/298-7020,facebook.com/bcsrmuseum