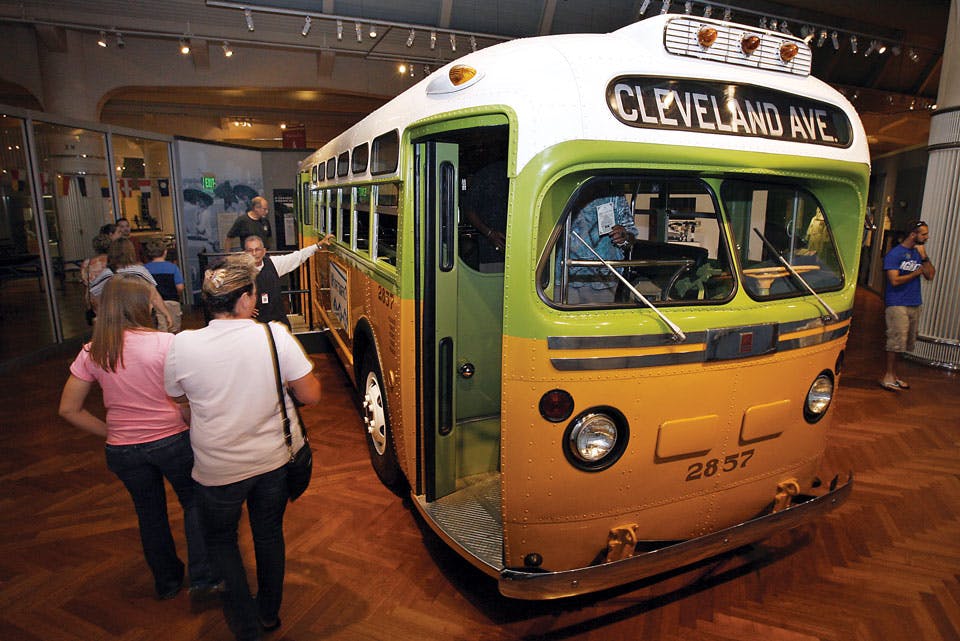 Head north and and you’ll find a range of destinations that celebrate history and heritage.

Michigan is well known for the natural beauty of its clean beaches, clear lakes and amazing forests. And we frequently associate the state with the automotive world for its manufacturing and racing ties. But Michigan also has attractions that celebrate the state’s early settlers and legendary Americans alike. These four destinations are places to get in touch with that past, whether you’re looking to ride in an authentic Model T Ford, try on a pair of wooden shoes or hang out where Ernest Hemingway once fished.

On Dec. 1, 1955, civil rights activist Rosa Parks refused to give up her seat on a full city bus in Montgomery, Alabama, so a white passenger could sit. Police charged her with disorderly conduct and she instantly became one of the most important figures in America’s civil rights movement. The original bus, now restored and preserved, is one of many priceless artifacts at The Henry Ford.

“We let people get onto the bus, which a lot of museums wouldn’t do,” says Patricia Mooradian, president of The Henry Ford, a 200-acre educational complex and National Historic Landmark. “You also hear about what happened in Parks’ own words. It’s important to have all the senses be touched by what happened because then history comes alive. I have sat on the bus dozens of times, and every single time I get goosebumps.”

Founder Henry Ford dedicated the museum to Thomas Edison in 1929 with the hope that the institution would reflect America’s resourcefulness, ingenuity and spirit, according to Mooradian.

The Henry Ford is a treasure trove containing artifacts of incredible historical importance, including the limousine in which President John F. Kennedy was assassinated and the chair in which President Abraham Lincoln was shot in Ford’s Theatre.

Greenfield Village, which is part of The Henry Ford, showcases more than 300 years of history with its farms, buildings and vehicles.

The institution also has an aggressive collection plan to make certain it preserves deserving artifacts of today and tomorrow. Recently, it successfully bid on one of the first Apple 1 computers hand built by Steve Wozniak and Steve Jobs in a garage. 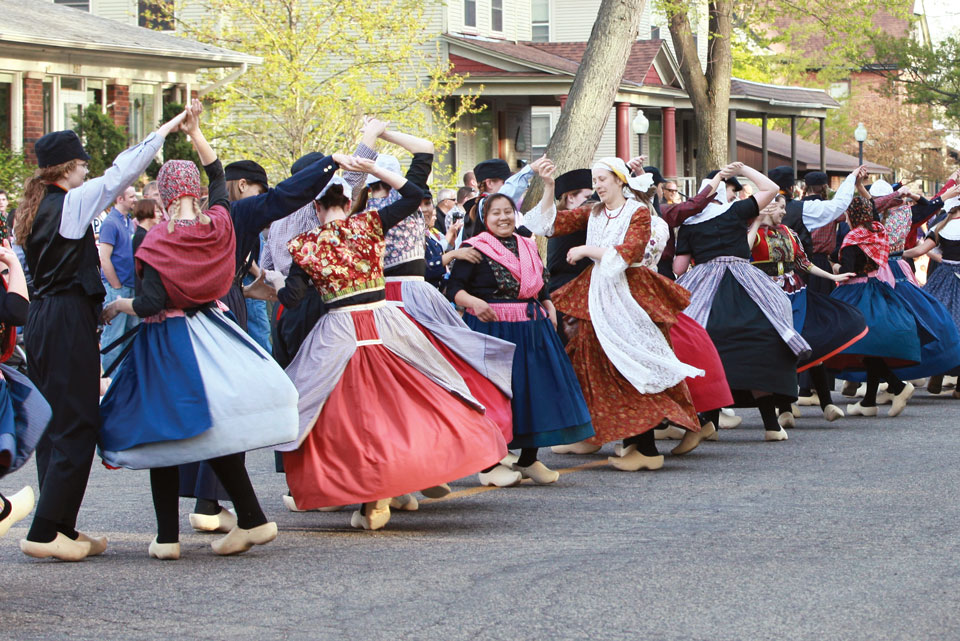 The annual Tulip Time Festival in Holland embraces the roots of the town’s early settlers, right down to the authentic costumes worn by the nearly 1,000 dancers who perform each day during the celebration. (There isn’t a single zipper to be found and wooden shoes are on everyone’s feet.)

The annual Tulip Time Festival in Holland embraces the roots of the town’s early settlers, right down to the authentic costumes worn by the nearly 1,000 dancers who perform each day during the celebration. (There isn’t a single zipper to be found and wooden shoes are on everyone’s feet.)Holland

This year, tourists can even get in on the act, if they’re willing to don the traditional footwear and register for the attempt to break the world record for the largest number of people simultaneously dancing in wooden shoes. (It currently stands at 2,604.)

But traditional dance is just part of this annual festival celebrating everything Dutch — a nod to the area’s first settlers who came from the Netherlands in 1847. This year’s celebration, set for May 2 through 9, also marks the 50th anniversary of the city’s working windmill, where grains are processed and made into genever, a Dutch gin.

Trolley tours offer historical insights as riders travel along 6 miles of road with thousands of tulips on both sides.

“Early-, mid- and late-blooming tulips are planted, so something is always blooming,” explains Gwen Auwerda, executive director of the Tulip Time Festival. “Weather also determines what tulips bloom when.”

The festival also pays tribute to the American Indians who were the first to call this area home. On May 2 and 3, Windmill Island Gardens is hosting the Historic Dutch Fair Trade, a re-enactment of meetings during which the Dutch and native people met to trade wares.

“It’s a story that isn’t always told,” says Auwerda. “We try to keep the traditions of the festival plus add new ideas.”

If you can’t make it to the festival, you can still get your Dutch fix here year- round. The beautiful Holland Museum is brimming with history and city artifacts. Then, check out the DeKlomp Wooden Shoe and Delft Factory, where you can watch Holland’s famous footwear being made. Visit tuliptime.com for directions to downtown Holland 49423, 616/396-4221. For more information about Holland-area attractions, visit holland.org.

The name Ernest Hemingway may more frequently conjure thoughts of Spain or Africa, but Michigan was also a setting the frequent traveler embraced in his writing. The Illinois native spent summers with his family in northern Michigan until he was 22 years old. As an adult, the acclaimed author returned to fish, honeymoon and gather insight for novels and short stories set in Michigan, including Summer People, The Torrents of Spring and The Battler, to name a few.

The Michigan Hemingway Society offers a self-driving tour with informative markers, including 12 in downtown Petoskey and others in the surrounding areas.

“That’s a good introduction,” says Chris Struble, president of the society and owner of Petoskey Tours. “But there are some places that are very relevant that aren’t marked. The one place to go is Harbor Bay.”

Struble says northern Michigan was long the summer escape for many of the state’s manufacturing-industry millionaires who wanted solitude and quiet, so they didn’t publicize the Hemingway-slept-here history that would have drawn tourists.

“As a result, the area was never commercialized like some places associated with famous authors,” says Struble. “The area is pristine and preserved and even prettier than it was because the trees have grown from the logging days.”

The Michigan Hemingway Society 2015 Fall Conference is scheduled for Oct. 16 through 18 in Petoskey. It features exhibits, speakers, readings and more, and Struble says Hemingway fans from around the world are expected to attend.

“Hemingway wrote simple stories ... But it’s like the iceberg theory: Ten percent of what you read is on the page; 90 percent is underneath. Hemingway’s popularity continues to grow.” For more information, visit the Michigan Hemingway Society at michiganhemingwaysociety.org or the Petoskey Area Visitors Bureau at petoskeyarea.com or call 800/845-2828. 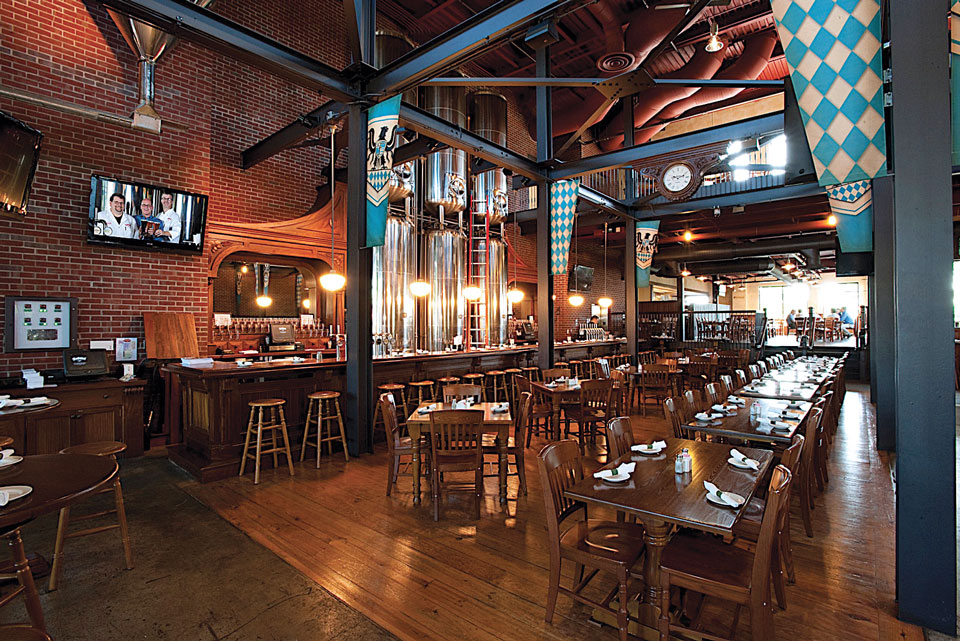 In 1845, more than a dozen Germans, mostly farmers, boarded a ship departing from Bremen with the aim to establish a German-Lutheran colony in the United States. They battled storms, icebergs, fog, smallpox and even a drunken ship captain who rammed their vessel into a sandbank. Once in America, they survived a train collision but also had to walk miles through swamps and deep forest when the train tracks ended. Talk about perseverance.

“That first group didn’t know what they were getting into,” says Mary Nuechterlein, collections manager for the Frankenmuth Historical Association. “But they were so convinced of their need to go to America and be missionaries that they left everything behind.”

Today, Frankenmuth, a quaint town of traditional German architecture with colorful wooden shutters and overflowing windowboxes, continues to pay tribute to those first settlers. It has become a destination for those who want to connect with their German-American heritage or just immerse themselves in the culture, which is reflected in the shops and attractions.

The Frankenmuth Historical Museum tells the story of the town and its founders by way of artifacts and exhibits, and the Lager Mill offers insight into the town’s brewing history while selling handcrafted beer, mead, cider and supplies for making your own.

Another popular stop is the historic Frankenmuth Woolen Mill Comforter Shop, which sells handmade wool bedding, quilts and lace. Frankenmuth River Place Shops, a shopping complex that resembles a Bavarian village complete with gardens and waterfalls, is home to more than 40 stores and attractions. Tickets for the Bavarian Belle Riverboat, an authentic paddleboat docked nearby, can also be purchased there.

Festivals, including ones spotlighting German heritage, are a regular occurrence here. The World Expo of Beer is set for May 15 and 16, and the Frankenmuth Bavarian Festival follows June 11 through 14, bringing plenty of lederhosen, beer steins, accordions, dancing and German food (think 10,000 pretzels and 5,000 pounds of chicken) to the streets.

“It started out with just the Bavarian Festival, but they say we have a festival for every month now,” says Nuechterlein. “Everyone brings their own interests ... and they will find something here for them.” Frankenmuth Historical Museum, 613 S. Main St., Frankenmuth 48734, 989/652-9701, frankenmuthmuseum.org